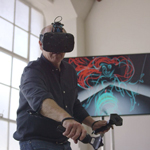 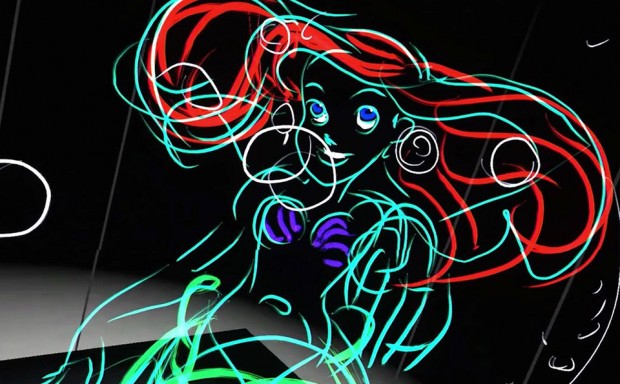 When legendary animator Glen Keane drew star characters for Disney’s Aladdin, Tarzan, Pocahontas, The Little Mermaid and Beauty and the Beast, he had the tactile experience of putting pencil to paper. Fast-forward to today, which finds Keane exploring a higher tech method of creating gestural art.

In the online video Step into the Page, Keane can be seen “drawing” in 3D space using virtual-reality gear. The artist wears an HTC Vive headset and wields Tilt Brush, a VR drawing tool being released by Google.

Keane talks about the process like a kid in a candy store.

“What I love about drawing in virtual reality is the feeling of immediacy that you get,” he says. “It’s like a dance. I sense that this is a path for something entirely new and very hand-crafted.”

While Keane was a key contributor to Disney’s “second golden age” of traditional animation in the 1990s, he’s no stranger to the latest digital tools. In 2014 he animated for Google’s Spotlight Stories the short Duet, which turned a cellphone screen into a window on a love story. Duet prompted an invitation for Keane to appear at the Future of Storytelling conference in New York this fall, and he’s taking his Vive and Tilt Brush gear with him. There, he’ll perform Step into the Page as a live demonstration.

These developments represent a chain of events that Keane could not have predicted for his career post-Disney, where he spent nearly 38 years.

“When I stepped out of the comfort zone of Disney, I felt I needed to put my sails up and be ready when the wind started to move,” he recalls. “Because of the Duet piece, my producer Gennie Rim and I visited various SIGGRAPH chapters, studios, schools and conferences around the world last year. I was excited to share the idea of animation becoming much more dimensional — to convince everybody that the drawings of characters were like little living sculptures.

“Then last fall I spoke at the Visual Effects Society in San Francisco,” Keane says. “After the talk, I was approached by Drew Skillman, who was developing a new tool, called Tilt Brush, along with Patrick Hackett. His eyes were alive with excitement, because they were working on tools to make sculptural drawing possible.” Keane followed up the conversation with a visit to Skillman and Hackett’s tiny studio, and saw the beginnings of what Tilt Brush would become.

Since then, says Hackett, “we’ve had a lot of discussions with Glen about where Tilt Brush could go. It’s important for us to get feedback from people who have careers’ worth of talent.”

While Stillman and Hackett developed the tool independently after spending a decade in the videogame industry, the sale of their invention to Google has made them VR players right out of the gate. The few hundred developers who are working with the Vive headset have received prototypes of Tilt Brush to work with, and Hackett admits that experimentation has been limited to those developers thus far.

“We’ve had a number of people reach out to us and say, ‘I run an animation school’ or ‘I’ve been making videogame art for ten years. Is there any way that I can try this?’ Right now, it’s just a problem of getting talented people into the hardware. But that will get easier and easier.”

Once Vive and Tilt Brush are released, starting at year’s end, Hackett expects that a robust period of feedback can really begin.

“It’s our hope that Tilt Brush will be the application that people show their friends to explain how the Vive works. It wouldn’t surprise me if developers use it as a launch pad for showing the mass appeal that VR could have.” With a consumer base in mind, Hackett adds: “We’ve tried to minimize the number of buttons the user has to learn. Everyone knows how to use a pencil.”

Keane himself sounds surprised that he’s been able to get the hang of Tilt Brush fairly readily, though he knows he has further to go. “As wonderful as drawing in VR is, there is still a learning curve that I see before me. But it reminds me of what I felt when I first started in animation. I’m intimidated, and hoping to learn to be able to master this approach. It’s absolutely fascinating to think about how you can sculpt and animate a figure in space.”

Even as the small group behind Glen Keane Productions continues to explore new tools and delivery platforms for animation, the animator himself sees it as part of a continuous creative thread.

“In my animation I have always been turning characters in space to show that they’re dimensional. This technology really opens that space up, and lets an artist like me draw what is already in my mind. That’s why I’ve felt strangely comfortable using it – like this was normal, in a way. I believed that I could actually draw in VR because it wasn’t so much about drawing the edges of a character as it was about believing in the form that existed within those edges. You really need to be thinking in terms of the dimensional form that you are defining.”

Keane is intrigued about the possibilities this technology holds for coming generations of artists – including his grandchildren. Which seems fitting, considering that he is the son of famed cartoonist Bil Keane, and the father of artists Claire and Max Keane. Calling himself “a town crier” for these new approaches to animation, he says, “I never want to get to the point where I stop sharing my discoveries. I find that I always have to teach. Passing on ideas is ‘the comet’s tail.’ And a comet only has a tail if it is moving forward.”

Finding the Line
View From the Top