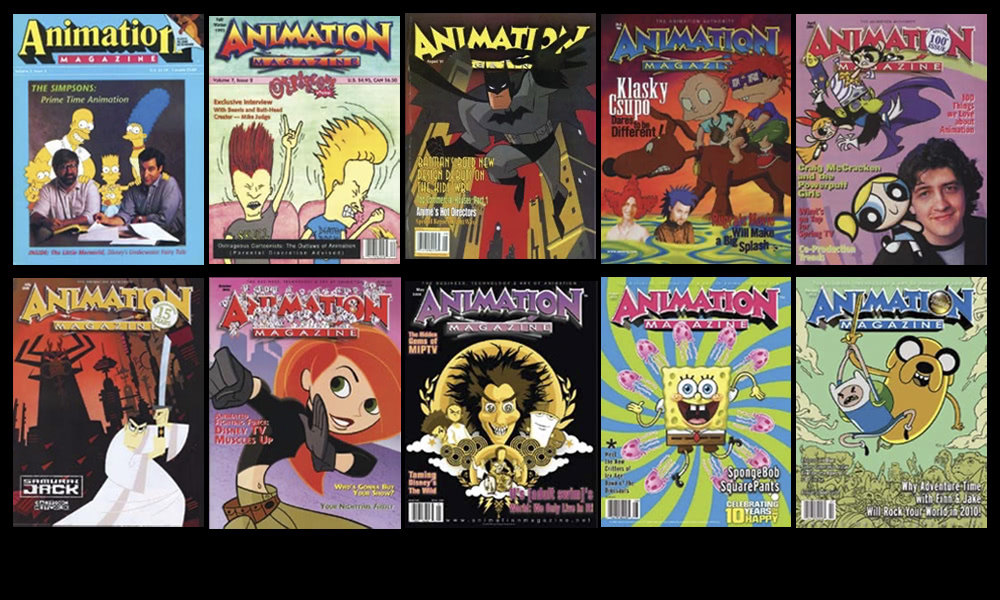 It was impossible to see it coming at the time, but right about the moment this magazine was being launched 35 years ago, a creative explosion in television animation was just starting to bubble up from the magma.

Sure, the landscape was still populated by things like Little Clowns of Happytown, Hello Kitty’s Furry Tale Theater and Beverly Hills Teens. But in September of ’87, CBS gave kids (and adults) a preview of the outrageous quality boom to come when it rolled out Mighty Mouse: The New Adventures on Saturday mornings.

Co-produced by Ralph Bakshi of Fritz the Cat fame and featuring genius rabble-rouser John Kricfalusi as its director, this Mighty Mouse introduced a wildly imaginative world of cartoon rodents while resurrecting old-time Terrytoons characters and satirizing movies as well as other cartoons. Watching it felt like dying and traveling to toon heaven.

But something else was also going on that seemed far less consequential back then.

The Tracey Ullman Show was a new sketch comedy series on the fledgling Fox network that served up crudely drawn weekly animated shorts featuring a family with yellow skin and significant attitude. The future of primetime animation would arrive soon enough when The Simpsons got its own spot on the Fox schedule, debuting with a Christmas episode in December 1989.

This was a great big giant deal at the time, the kind of roll of the dice that broadcast networks weren’t in the habit of doing. To be sure, there had been successful primetime cartoons before, namely the masterful The Adventures of Rocky and Bullwinkle and Friends (1959-64 on ABC and NBC) and of course The Flintstones (1960-66 on ABC). But nothing prepared TV for the earthquake that The Simpsons triggered as such a massive and, as the decades piled up, historic hit. (As I write these words, the show has broadcast an astounding 725 episodes.)

As The Simpsons sprouted into a societal and even international phenomenon, competitors leaped into the fray to capture more of this cartoon lightning in a bottle with short-lived early 1990s primetime efforts like Capitol Critters (ABC) and Fish Police and Family Dog (CBS). The networks clearly misread what The Simpsons‘ success meant. It wasn’t the animation per se that was connecting with audiences, but the monumentally clever writing and fully-realized characters. The fact they weren’t actual people was decidedly less relevant.

The Simpsons ushered in a new era, to be sure. But at first, it didn’t happen with traditional broadcasters; it came initially on cable, specifically at Nickelodeon, MTV and USA Network.

The TV animation landscape has evolved drastically in the past 35 years. Pictured ,clockwise from top left: The Simpsons, BoJack Horseman, Tuca & Bertie, Rick and Morty, Primal, and Maya and the Three.

In August of 1991, Nick introduced Rugrats from Arlene Klasky, Gabor Csupo and Paul Germain in tandem with creator Kricfalusi’s The Ren & Stimpy Show. Both were extraordinarily inventive for radically different reasons, with Rugrats depicting life from the point of view of its toddler stars and R & S featuring a sociopathic Chihuahua and a dimwitted cat. Both were breakouts, though Ren & Stimpy found itself bathed in controversy due to its consistent flouting of rules and good taste.

MTV, meanwhile, whipped up some magic of its own with the futuristic, acid trippy Aeon Flux — birthed in 1991 by creator Peter Chung out of the network’s Liquid Television experiment — and Mike Judge’s teen slacker-glorifying Beavis and Butt-Head (1993-97).

Then in 1994, Duckman (created and developed by Everett Peck, who passed away just a few weeks ago) pecked its way onto the USA Network schedule, sticking there until ’97. It featured the voice of Jason Alexander portraying a sarcastic, embittered, womanizing private detective/family man/duck, and it was hugely under-appreciated (much like the character the show depicted).

Not to be outdone, Cartoon Network soon made its presence felt with its original content, first in ’94 with Mike Lazzo’s hilarious adult animated comedy Space Ghost Coast to Coast, which repurposed a standard-issue Hanna-Barbera Saturday morning superhero character into something far more ingenious as a surreal talk show spoof.

It was the fact that creators and networks discovered there was a grown-up audience clamoring for animation that so changed the game. Mind you, it wasn’t that young people were being shortchanged. They were also being served shows like the Fox Kids pair Batman: The Animated Series from Bruce Timm and Eric Radomski (1992-95) and hyperkinetically wacky social satire Animaniacs (1993) from creator Tom Ruegger and exec producer Steven Spielberg, which ran for five seasons.

By the mid-1990s, television was officially the place where animated content was taking wing and soaring into the stratosphere. Seemingly, all the rules that had shackled cartoons were being tossed aside and replaced with an edict to let the imagination and eccentricity flow.

How else to explain Dr. Katz, Professional Therapist, Comedy Central’s early claim in the animation game from Jonathan Katz and Tom Snyder (not the broadcaster) that set spoofy counseling in a jittery computer-generated animation form it called “Squigglevision”? It landed in 1995, two years before creators Matt Stone and Trey Parker would blend the grotesquely hilarious with the gloriously profane to fashion South Park, their Comedy Central gift that keeps on giving.

If there were purported lines you couldn’t cross in small-screen animation, those were obliterated by the show’s persistent vulgarity and its gleeful evisceration of sacred cows along with a purposefully crude, jerky style. But as proudly offensive as it was, South Park was (and remains) trailblazing, carving out an innovative niche that served to transform entertainment itself.

The sense of creative revolution and evolution wasn’t entirely restricted to cable, however, as the age of Seth MacFarlane demonstrated with his toon stable that began with Family Guy. Whatever Stone and Parker wouldn’t or couldn’t do, MacFarlane did, and his Fox show that began life in 1999 has proved an ode to joyousness and ceaseless punchlines, which tend to bounce out of his characters like machine gun fire.

It was around this same time that the TV animation world was finally made safe for female leads, too. The pioneering Daria (from creators Glenn Eichler and Susie Lewis Lynn), a 1997 MTV spinoff from Beavis and Butt-Head focusing on a bright, jaded teenage girl slightly out of step with her peers and family. Then in ’98, Craig McCracken turned his college short film Whoopass Stew! into The Powerpuff Girls for Cartoon Network.

Powerpuff Girls skewed significantly younger than Daria, centering on the three kindergarten-age superheroes Blossom, Bubbles and Buttercup. The original show survived for six splendid seasons, the girls slaying not just monsters but bedwetting, sibling rivalry and personal hygiene. It furnished young girls with positive role models they could relate to, albeit fictitious ones. This clever depiction of girl power would later inspire other terrific female representation in Toon Town, from Bob Schooley & Mark McCorkle’s Kim Possible to more modern heroines such as ND Stevenson’s She-Ra and the Princesses of Power and Lisa Hanawalt’s Tuca & Bertie.

In 1999, Nickelodeon hit one of the biggest jackpots in the history of animation when it debuted Stephen Hillenberg’s SpongeBob SquarePants, a delightful show about a very absorbent, goofy and optimistic sponge, voiced by the one-and-only Tom Kenny. The fact that the show spawned a live Broadway show, three feature films, a blockbuster musical and several spinoffs and still hasn’t run out of steam is a tribute to the genius of its creator, Stephen Hillenburg who sadly passed away in 2018.

A couple years later, Nick trotted out the darkly comic and agreeably twisted Invader Zim in March 2001, from cartoonist Jhonen Vasquez, focusing on an alien named Zim from the planet Irk who had been sent across the universe to conquer Earth. The show brought a goth comic-book icon into the after school sphere, and the creator and network were often at odds. Zim went offplanet after just 27 out of 40 episodes ordered.

In general, while shows created by and about white men remained abundant and ubiquitous, some color finally began to trickle in as the millennium turned. Chief among these efforts was creator Aaron McGruder’s consistently brave African-American animated comedy The Boondocks, growing out of his syndicated comic strip of the same name to join the Adult Swim lineup in 2005.

Depicting a dysfunctional Black family living in a mostly white suburb, Boondocks hit television like a right uppercut, resolutely taking provocative stands in its political diatribes and biting satire. There was also Black creator Bruce W. Smith’s The Proud Family, which actually predated The Boondocks by four years on Disney Channel but made a decidedly quieter splash. It was, nonetheless, well before its time with its tuneful vibe and colorful cast.

When it came to Latino representation, perhaps nobody did it better and with more pizazz than the talented Jorge R. Gutierrez and Sandra Equihua, whose Nickelodeon show El Tigre: The Adventures of Manny Rivera (2007-2008) led to Gutierrez’s masterful 2014 movie The Book of Life and 2021’s Netflix’s limited series Maya and the Three last year.

Beyond that, since we entered a new century, there have been too many great animated series to easily count. I’m thinking of John R. Dilworth’s darkly uproarious Courage the Cowardly Dog (1999-2002, Cartoon Network); Adam Reed’s spot-on spy spoof Archer (FX and FXX, 2009 to present); the Adult Swim masterwork Aqua Teen Hunger Force (2001-15), which brought fast food items into the animated character development universe; and BoJack Horseman from creator Raphael Bob-Waksberg (Netflix, 2014-20), which brilliantly melded streaming to the world of original animation. 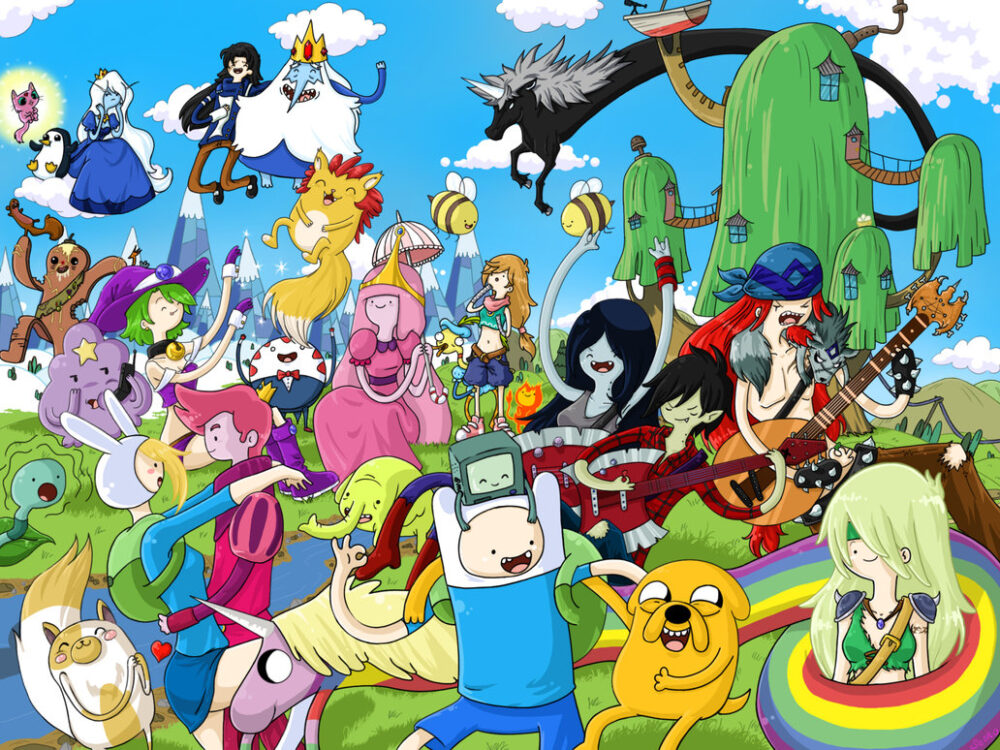 In 2010, Pendleton Ward’s Adventure Time introduced a world of whimsical and sometimes tragic characters to fans all over the world.

Adventure Time and Beyond

Let’s also give plaudits to some other critical darlings, like the surreal, fantasy video game-inspired Adventure Time (2010-18), the Cartoon Network series from Pendleton Ward that won a slew of Primetime Emmys and even a Peabody Award. There’s also the Adult Swim entry Primal (from Genndy Tartakovsky) that arrived on the schedule in 2019 to great fanfare and crafts a prehistoric world with the auteur’s typical flair.

I haven’t even brought up shows like the Fox trio King of the Hill, Futurama and Bob’s Burgers, Rick and Morty or anything in the vast and diverse anime realm. The truth is there’s just been too much spectacular animated TV (and now streaming) over the past three-and-a-half decades to cover everything of genuine merit.

Indeed, we’ve come an awfully long way since ’87. If we can scarcely imagine what we’ll be examining in the rearview mirror in 2057, it’s nonetheless a safe bet that The Simpsons won’t have missed a step and will be preparing to plow through Season 69! 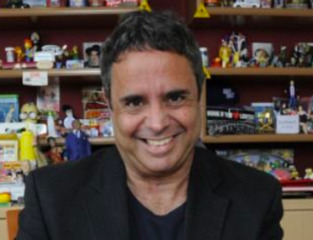 Ray Richmond wrote the seminal episodic compendium The Simpsons: A Complete Guide to Our Favorite Family in 1997 that highlighted the show’s first eight seasons. He felt secure at the time that the book would wind up covering the majority of the show’s run.