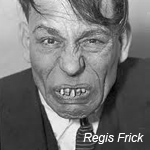 Few men in the history of animation had as hard a time forging a career as actor Regis Frick. It was not that Frick wasn’t a good actor; in fact, his recitations of Shakespeare were said to move audiences to tears. The problem was that Regis Frick’s had a face that moved people to jump out windows. He is thought to be the ugliest man ever to hold a SAG card (no offense, Marilyn Manson).

I was reminded of the plight of Regis Frick having recently come across an interview I conducted in 1988 with the legendary animator I.P. “Whiz” Daley, who as a young man worked at Disney’s Hyperion Street studio. Whiz recalled the time that Frick’s agent, a man who normally specialized in providing the apes for Tarzan movies, sent the actor into the studio for a study footage job. “We were just starting work on The Three Little Pigs at that time,” Whiz told me, adding: 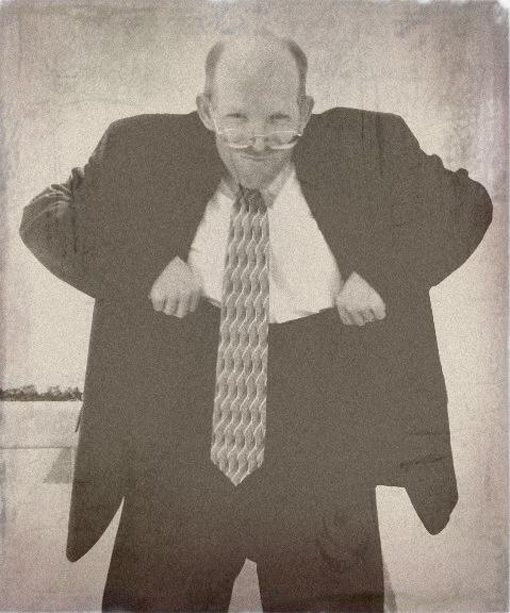 “They wanted to film somebody to act out the movements of the Big Bad Wolf, so in comes ol’ Frick. Well, the first thing that happened was the front receptionist took one look at him and fainted dead away. Had to give her smelling salts. Meanwhile, Frick makes his way back to the artists’ room, where a bunch of us were sketching an actual wolf for reference. Big thing, with long teeth, and all. That was unnerving enough, but then here comes someone who looks like he was just named Zombie of the Year. That danged wolf gets one look at his puss and lets out a howl, then takes off running all through the studio, frightened out of its mind. Fortunately, Roy Disney had worked as a professional wolf chaser back in Kansas City, so he was able to catch it. Frick was fired on the spot. But after that he came back to the studio at least once a week, sniffing around for other work and scaring the hell out of everybody. Finally the staff took a vote and told Walt that if Frick showed up one more time, they were all going to walk out. So the next time ol’ Frick arrived, Walt threw him off the lot for good. It was either that or face a strike!”

Whiz commemorated Walt’s “escorting” Frick out of the studio in a sketch. 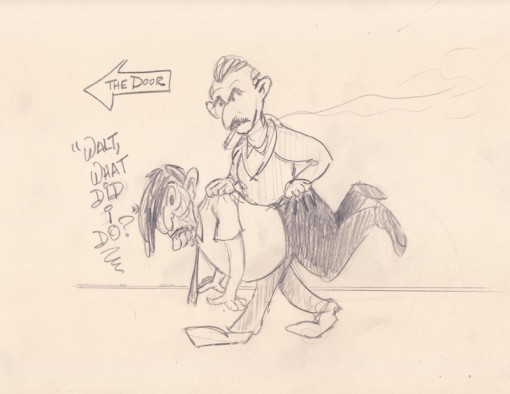 Regis Frick would go on to a stint at Famous Studios, though not as a voice actor; he was hired to jump out in front of staffers so the animators could sketch their reactions and use them for Casper cartoons. He also scored work at MGM reducing child actors to on-camera tears when the old director’s “we-just-shot-your-dog” ploy no longer worked. He returned to performing in his final decade, making appearances at “Knott’s Scary Farm” during the Halloween season, thereby saving thousands in the makeup budget.

Regis Frick passed away in 1983 at the age of 78. He had a welded-shut-coffin funeral, just in case. His story remains one of the more tragic tales to come from the Toon Trenches.

Unless, of course, it’s an April Fool’s joke.