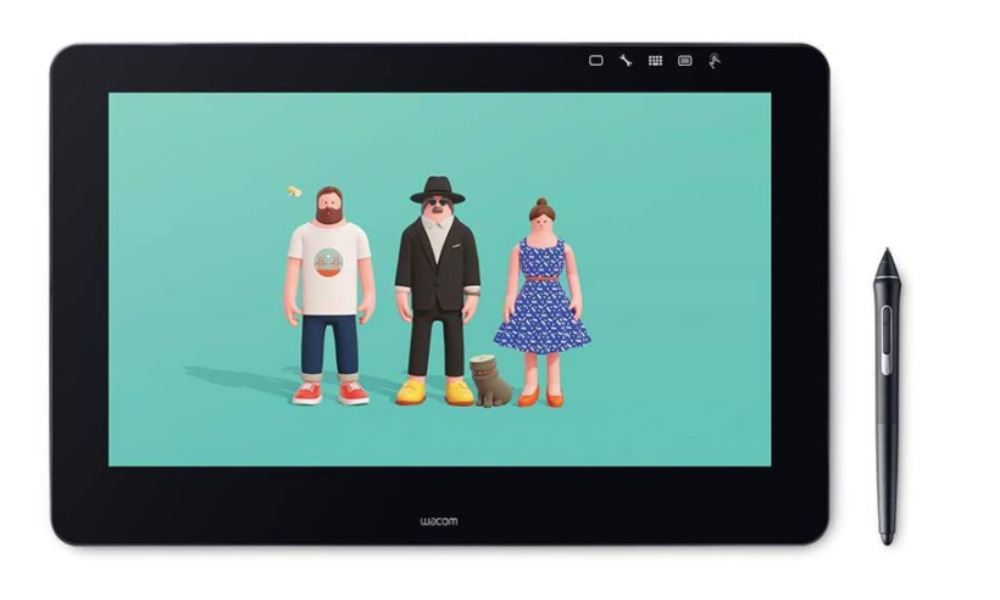 Wacom’s latest entry into the Cintiq family is a good one. The new Cintiq Pro 16 is thin and more mobile than previous editions — especially at this screen size (16.6 x 11.2 x 1.0 inches). I’m frequently running back and forth between office and home and set, and having a Cintiq in a carrying case next to my laptop is great when you have to draw something up quick for a client — or when inspiration strikes and you want to quickly sketch something out.

Of course, you might say, “My iPad is great for that kind of thing.” And you would be correct, but only to an extent. Like, what if you are a sculptor and want to flesh out ideas in ZBrush? Or a digital matte painter or portrait artist, and need a pen with the sensitivity and comfort that the Wacom Pro Pen 2 provides. The pen with this Cintiq is more sensitive and accurate than the previous version, and along with the anti-glare glass cover, you get that subtle, tactile feel of drawing on a responsive surface. Quite honestly, you can feel the difference that 4x the sensitivity gives you. Wacom has also been attentive to keeping any kind of lag to a minimum, and the bonding between the screen and the glass keeps getting thinner to prevent unwanted parallax between the nib of the pen and the artwork.

The workflow is dual, meaning that you can be drawing with one hand and the other can be controlling zooming, rotating and repositioning with programmable touch gestures. Or, if touch is not your thing, there is a handy button tucked in the top of the tablet to quickly switch off the touch capability. Further, the Express Keys are found on either side edge of the tablet —four to a side — so your Ctrl, Shift and Alt are conveniently accessible. If you are an Express Key remote person, that accessory is still supported. So, you can hold the remote in one hand while sketching with the other.

The Cintiq Pro 16 is a 4K monitor with the display pushed through either an HDMI or USB-C cable. The specs for the color are 98 percent Adobe RGB and calibratable with Wacom’s color calibrator and profiler. It’s not HDR, but it will be pretty accurate for most things outside of color grading — and if you are color grading on your Wacom, you are probably in the wrong business.

It’s not a trivial spend at $1,500, but this isn’t an entry level tablet. This is for the professional digital artist who makes their living creating, and the investment into the feel of the tablet and the quality of picture will be worthwhile. 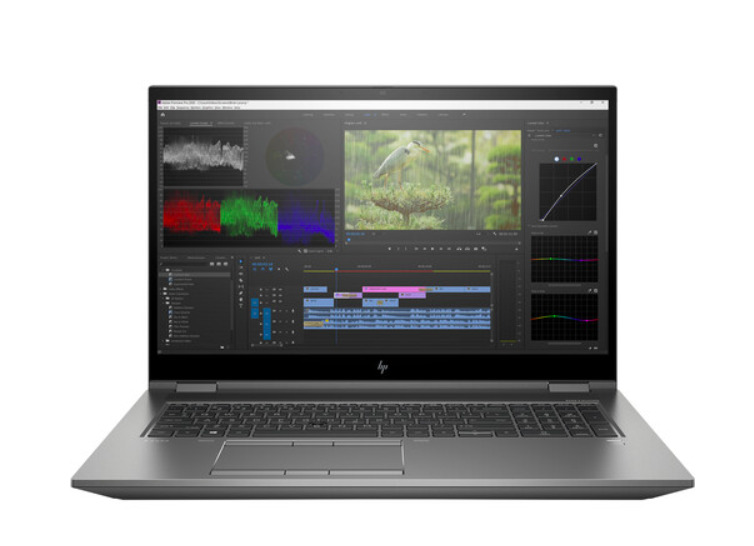 I am constantly amazed at how we continue to fit more and more power into smaller and smaller spaces. I’m sitting here, writing this review on the HP ZBook Fury 17 G8 mobile workstation — and really, writing a review in Google Docs on this piece of hardware is much akin to coasting in first gear in a school zone inside of a Lamborghini. But fear not, I’ve been running it through its paces — at least around the Media & Entertainment spaces. I would honestly need some kind of scientific dataset to run through the NVidia RTX A5000’s TensorFlow to really open it up.

I’m going to start with the best: the monitor, a DreamColor 4K display that inherits the technology from the HP line of professional displays found in many a color suite and on most desks of compositors. And it has the blue and white check mark indication that Pantone has given its stamp of approval. The image is crisp and contrasty with a 120Hz refresh and a peak 600 nits. It’s absolutely capable of color critical tasks — but, like the Wacom Cintiq Pro mentioned in the companion review, you shouldn’t be grading major projects on it. Instead, you grade on the real HP DreamColor display that you can hook into your Fury via one of the USB-C ports.

Speaking of ports, the Fury has many. A couple USB-Cs, HDMI, MiniDisplay, an SD slot, an Ethernet port, audio jack and a couple of the tried and true USD 3.1 Type-As. Plus, if you want, you can always attach an external Thunderbolt dock.

Under the hood, my review unit sports an Intel Xeon W-11955M vPro CPU running at 2.60Ghz and 64GB of RAM (you can get to 128GB) — which is quite honestly just as powerful as my full Z820 workstation. I have a 1TB SSD, but there are four ports for storage that can each take a 2TB SSD — so … 8TB? In my laptop? All of the expandable components are readily accessible underneath the unit with toolless panels. So, upgrading is hardly even a thing.

Then, you have the aforementioned NVidia RTX A5000, which makes the world so much more manageable. All of the M&E software I ran worked like a champ: Maya, Max, Houdini, Arnold, V-Ray, anything Adobe, Nuke — whatever. Most performed as if they were on a full workstation. That said, I didn’t get around to running extremely heavy fluid simulations, but suspect you would still manage to get some FX work done when in a pinch.

Some additional bonuses (which may sound critical to some) are the laundry list of security features ranging from tamper detection to see if anyone accessed the chassis, to BIOS checks, to software protection, to Tile-driven tracking (even when the laptop is off) and even a little physical shutter that you can slide over the webcam.

The Fury 17 G8 is not a laptop for the faint of heart. The entry level version isn’t bad at all, but to get into the realm of true workstation performance, you can plan to spend much more than heading to Best Buy to pick up something to write emails on (or Google Docs). But for those you need that type of power — this machine has got it, and probably more. 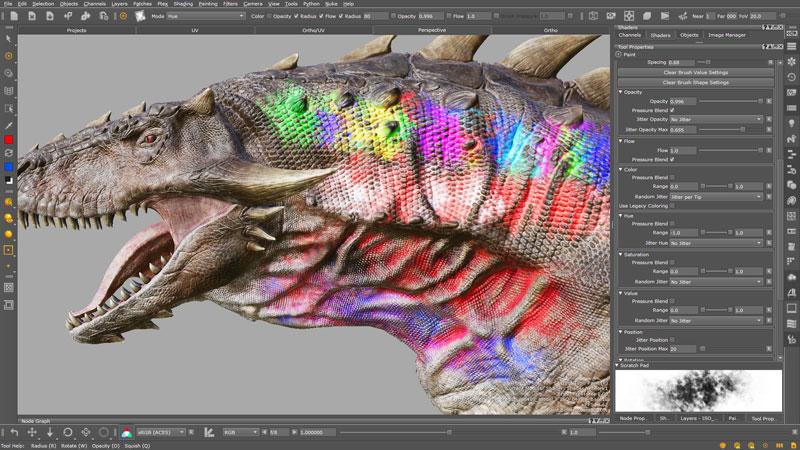 Late last year, Foundry released a critical upgrade to their 3D painting and look-dev tool, Mari — bringing it up to 5.0. This latest version offers new features to pipeline support, performance, proceduralism and painting (the Four Ps, I suppose you could say).

We have been seeing the USD file format become more and more ubiquitous as facilities are adopting the format for layout and sharing between facilities and DCCs. Mari utilizes this format, incorporating it into its painting and look dev so that exported assets can be viewed in software with Hydra-supported viewports. In this way, the work coming from Mari artists more closely reflects what the lighting artists are going to be working with and rendering. This dramatically tightens a loop between the two departments — getting the assets into scenes faster and more predictably. This would be the “Pipeline” of the Four Ps.

In Painting, Foundry has provided a plethora of paint tools to increase artist control over variation and application. A much-asked-for feature has been added for a more robust control system jittering numerous values such as flow, hue, saturation, value, position, rotation. And these can be set to the brush stroke, or even individual paint hits within the brush. And these variations can be set independently and driven by the pressure of your pen. With individual control over each parameter, you can create a gazillion different patterns, with every stroke being slightly different.

In conjunction with these brush controls comes an expanded use of images as brush tips. Before, an alpha in an image would be used as the brush tip — the stencil, so to speak. But artists can now use any of the RGBA channels to determine what image the tip will lay down — or even feed all the channels into the tip and jitter them to add some controlled chaos to the patterns.

Under Proceduralism, artists can add filters non-destructively to a bake point — a place in the node flow where you want to flatten the graph so it doesn’t continually process everything upstream. Previously, one would have to save everything down to a paint layer and then add filters downstream. This workflow was disruptive and cumbersome. But when you add the filters directly in the bake point, adjustment can be tweaked without much overhead.

Also in Proceduralism, there are five new procedural gradient patterns to make soft masks across broad areas on the model based on projecting from the camera or objects, or setting locators in space around the model. This not only provides a lot of flexibility and control over the masks, but because they are based on things other than the model, it means that the gradients will not change if the model or UVs are updated.

Finally, in Performance, Foundry in collaboration with Weta (who originally developed Mari), has accelerated the flattening of Bake Points or committing paint to a layer by making a hybrid calculation utilizing the CPU and the GPU. The results have been up to 50 percent faster in some situations.

TV & Streaming News Bytes
A Cat for All Seasons: ‘The Amazing Maurice’ Is Ready for His Animated Debut