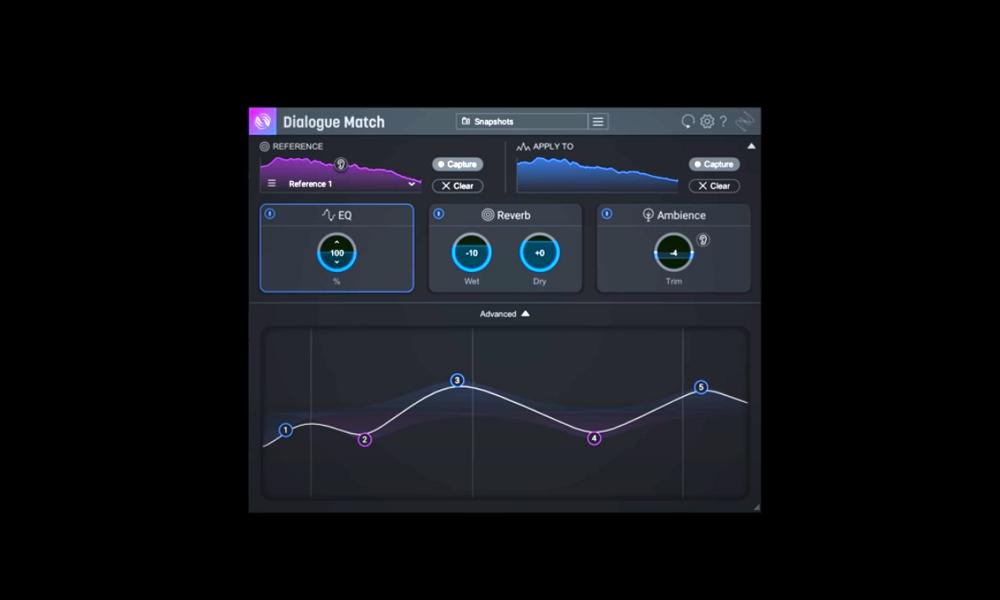 Every couple of years or so, I have to remember that half of a movie is sound — especially for animation and visual effects. So, whether you are a pro sound designer (who probably would be familiar with these tools already) or you are working on your own animation project, you should be aware that sound tools have been advancing at the same rate as the visual tools have.

The tools we are looking at today are all from a company called iZotope. They make standalone products as well as plugins for a slew of DAWs (Digital Audio Workstation) like Ableton, Cubase, Logic Pro X and Pro Tools, among others. They span from music production to post-production. I’m going to focus on post-production tools, and more specifically on audio mixing and repairing tools. Starting with Dialogue Match.

I’m more of a visual guy. My eye is tuned way more than my ears are. So, when I have dialogue tracks that have been recorded at different times, different places, even the same audio recorded with different mics — on-set audio versus in a recording suite doing ADR (Automated Dialogue Replacement — far from “automated”, BTW) — I know that these all sound different from one another, but I wouldn’t know where to start to attempt to match them up.

Dialogue Match is a Pro Tools plugin for tackling this specific problem.

The process goes something like this: You take the audio that you think is the best; the one you want everything else to match to. Dialogue Match analyzes the clip and creates a profile that includes the EQ, the Ambience and the Reverb. You then feed in a clip that you want to match. That one also gets analyzed, and Dialogue Match makes adjustments to shore up the differences. Once that process is complete, you are provided controls to finesse just how much of each component you want to use.

I can’t adequately express to you the heartache and frustration you can avoid using this. I was able to take voice over recorded in eight different settings and match them. I found that some pre-repair was required in RX 7 (see the RX 7 review below) to make the clips sound the best they could be, and then Dialogue Match was the last step in the process to nudge all of the clips together so they sounded like they were all recorded in the same place in the same session.

At $600 it’s not an insignificant investment. But if you are mixing a lot of dialogue, your ROI just based on your time spent is going to make up for it. 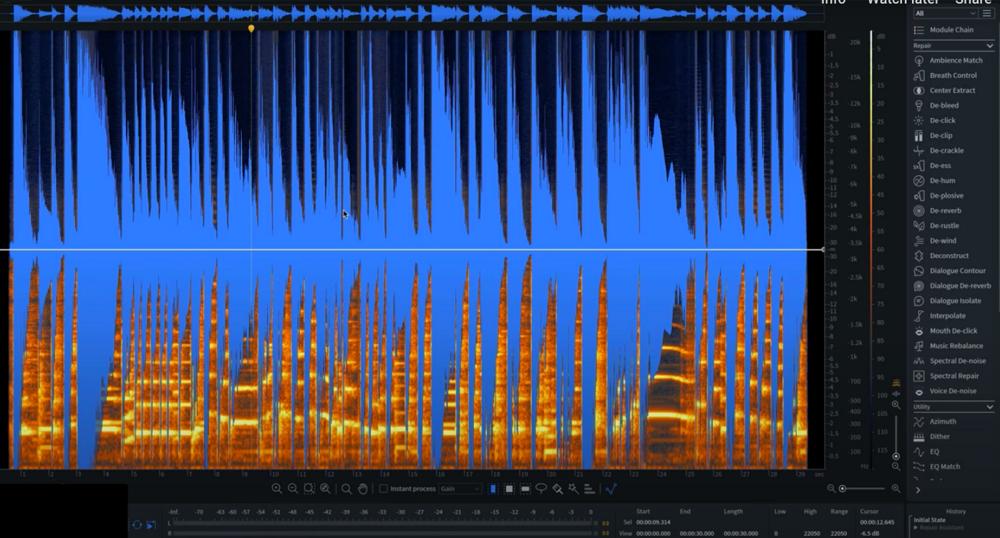 In the Dialogue Match review, I mentioned that I did a “pre-repair” or “pre-clean” on the dialogue before matching them. To do this, I used RX 7, which is a powerful set of tools within a standalone product, but through RX Connect, can be launched from your DAW, and the result is brought back into the mix. The idea behind RX 7 is that you build up a “module chain” of effects as you repair the audio. Think of it as a stack in 3ds Max, a list of effects in After Effects or a series of nodes in Houdini. The process can be repeated for other clips. And you can go up the chain to make adjustments.

There are a lot of tools in RX 7, which vary depending on whether you have Elements, Standard or Advanced, and I can’t go through them all — so I’ll look at the most recent and most powerful.

First, RX 7 has a Repair Assistant. This is a helper that analyzes the audio clip, searching for the most common issues — noise, clipping, clicks, pops, etc. It listens to the clip and then makes three suggestions of how to fix the clip. This can be chosen for music or dialogue (which have different repair considerations). You can audition different versions and choose the clip you like best and render it out, or you can opt to open the module chain that Repair Assistant created under the hood and begin to customize it to your liking. This is great for processing a lot of audio, pushing them closer to where they need to be.

Dialogue Contour is another kinda magical module. There are numerous cases where you want to modify the speaker’s intonation. Sometimes you are stitching together dialogue from multiple takes (Franken-editing) where the energy and inflections don’t match. Or, perhaps, the speaker is emphasizing in odd places or they simply rise at the end of each phrase, like it’s a question. In Dialogue Contour, you load in the clip and using a curve (like you would for animation or adjusting volume or opacity), you can sculpt the tone of the delivery.

Dialogue De-reverb and Dialogue Isolate work in similar ways, utilizing machine learning to identify dialogue against an environment’s reverb qualities. Or, in the case of Dialogue Isolate, separating the dialogue from complex background noises like clanging plates, aircraft, cars, etc. Dialogue De-reverb is different from other de-reverb plugins in that it doesn’t need a clean source of the ambient reverb to subtract from the clip you want to fix. And Dialog Isolate is required when you need to separate the voices in order to process them along and mix in foley afterwards.

Other crazy productive modules include a slew of other “de-” tools: clicks, clipping, hum, noise, bleed, crackle, plosives, ess-es and rustles. And that’s hardly the end of it.

Again, these are problem-specific tools, so the cost isn’t necessarily democratized. But iZotope does offer three different versions of RX 7, ranging from $129 for Elements (which gives you a number of the “de-” modules) on up to $1,199 for Advanced, which has everything. 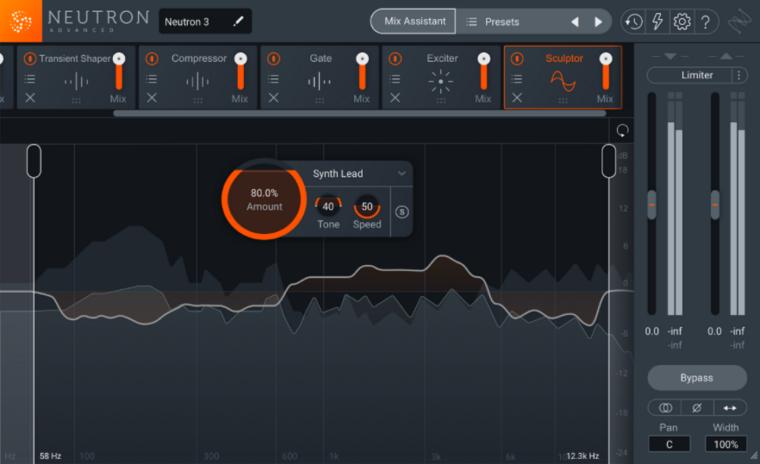 While RX 7 is focused on repairing audio clips, Izotope’s Neutron 3 is more in line with sweetening and creatively working with your audio within your mix.

Mix Assistant, like Repair Assistant, is meant to give you a starting point from which to work. But this is all about taking your different audio tracks and balancing them together. Its strength is in music, but can be used for other mixes.

The idea is to load in all of the tracks for your mix (vocals, guitar, bass, drums, etc.) and set which tracks you want to be the focus. Mix Assistant will listen to it, and through deep learning algorithms, will suggest an energy balance for the piece you are working on. A group of sub-mixes are generated, which are controlled by master sliders that you can adjust to your own taste, based on Mix Assistant’s suggestion. Your mix can be viewed through the Visual Mixer, which not only shows you the gain of each piece of the mix on a vertical axis, but also allows you to control the pan and width of the channel — allowing you to “place” the sound in space.

Sculptor does exactly what you would think it would do — it “sculpts” your audio.  It’s really a collection of EQs, compressors, gates, etc., that are combined into a visual interface that shows you a comparison between your original waveform and the sculpted result. You can choose from a bunch of musical instrument presets for the type you are working with. But it’s not simply a plug-n-play rote preset. Like many of the newer iZotope tools, Sculptor listens to your recording and uses deep learning to make suggested parameters. This is a starting point to make that instrument sound its best, and you can start tweaking from there. And you can get really fine-grained without tweaks as you can isolate the effect to work within certain frequencies by dragging limits (kinda like in/out points in a picture editor).

Masking Meter is a sophisticated, visual way to see when audio channels are masking one another. This happens when two sounds are sharing the same frequencies. Generally, you would figure out the less important sound and go into a dynamic equalizer and reduce the values within the conflicting frequency — allowing the more important audio to come through (frequently vocals). The Masking Meter identifies the conflicting areas and provides the curves to adjust to re-balance. It also has an “Inverse EQ” function which will counter correct the conflicting sound — i.e. if you drag the curve of your active sound down, the other curve on the conflicting sound will go up. This keeps the overall output energy balanced.

Like the other Izotope tools we’ve discussed, I’m just grazing the top layer of the most recent of many tools that Neutron 3 has to offer. If you have songs or production audio that you need to mix and sweeten, the Neutron versions range from $129-$399.

All products and more info available at izotope.com. 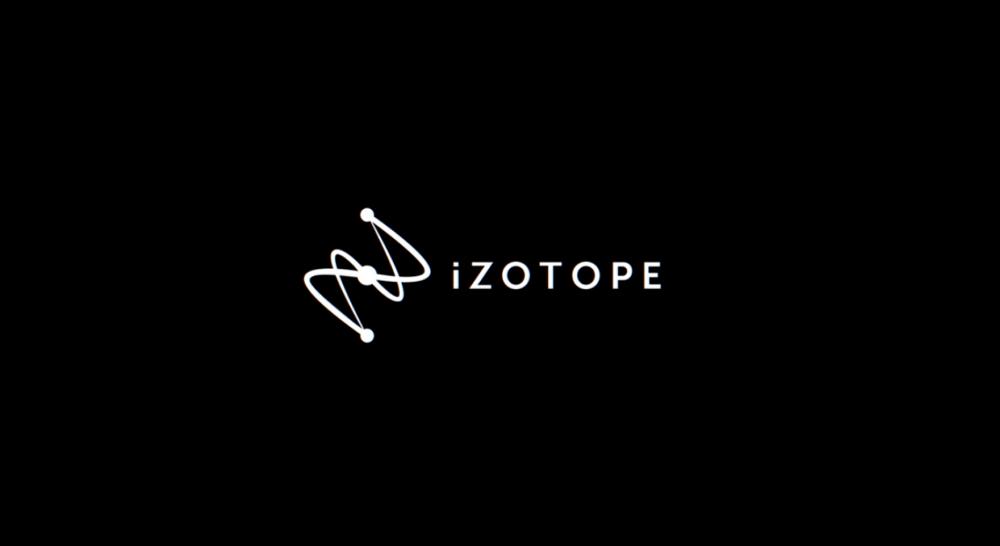