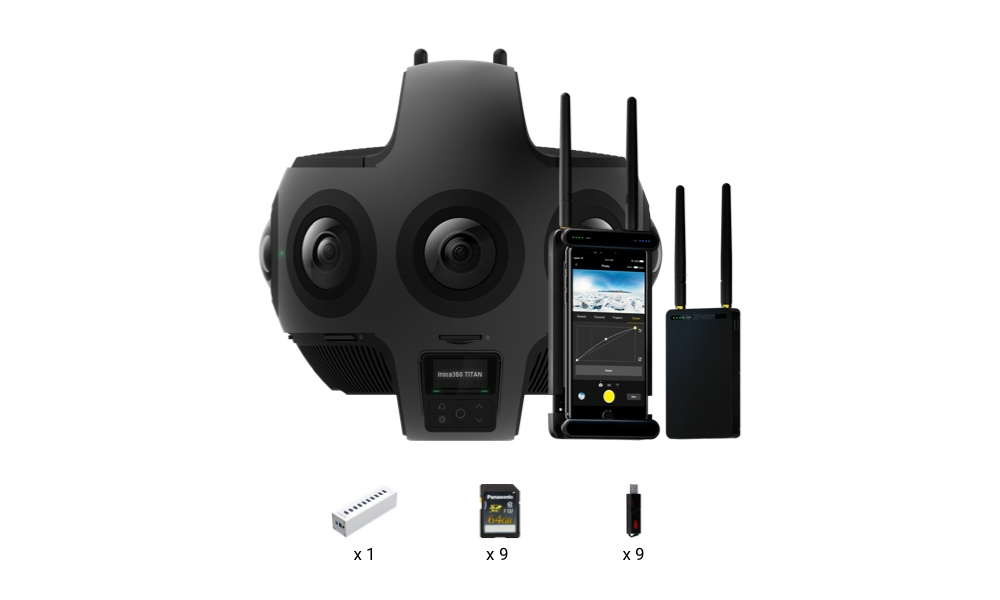 As virtual reality and experiential cinematography become more and more ubiquitous, the hardware to capture these images is following suit. Insta360 has already established a toehold in the industry with consumer (ONE and Nano lines) and prosumer/professional (Pro/Pro 2) cameras, each one coming with support software to aid in stitching and stabilization. But it’s the Insta360 Titan that leads the crowd in quality, size and price.

Twenty-two centimeters across with a healthy weight of 12 lbs, the Titan looks like the droid who’s about to torture the location of the rebel base out of Princess Leia. But you need that heft to carry the eight micro four-thirds sensors and 200° lenses, the 10,000 mAh battery, and the four mics to support ambisonic spatial audio. So, you are going to want to mount this to a camera head with a lot of support. And you probably won’t be capturing footage as you longboard down a 20 degree grade (that’s what the ONE or the ONE X2 is designed for). No, this is for some grandiose imagery with the highest quality for the most discerning filmmakers.

The camera can output up to 11K video in a post-stitching situation — meaning, taking the files from the nine SD cards and running them through Insta360’s stitcher or a third party stitcher of your choice. This 11K is at a lower color bit, but for the 10-bit color you can still output 8K. And this can be either mono or stereo. You can also take 11K mono or stereo stills, which can stitch in real time or post. And if that weren’t enough, the Insta360 Titan can stream real-time stitches in 4K (both 2D and 3D), or even in 8K with an additional license and a workstation to assist.

A live stitch can be broadcast over wifi, but it’s recommended to use the Insta360 Farsight method, which has a dedicated transmitter and receiver; the latter is designed to hold a small phone or tablet so you can monitor what the camera is seeing. The Farsight transmitter has a range of 300 meters ground-to-ground, and 1,000 meters ground-to-air — which frankly is a disconcerting idea, this 12lb camera flying on a drone a kilometer away.

If you are serious about 360 cinematography, then this is probably the rig you should be looking at. At a $15K price tag, it’s, without a doubt, a healthy investment. But price it out against a couple of RED Monstros and correlating Entaniya HAL 220 fisheyes and it’s a bargain. #context 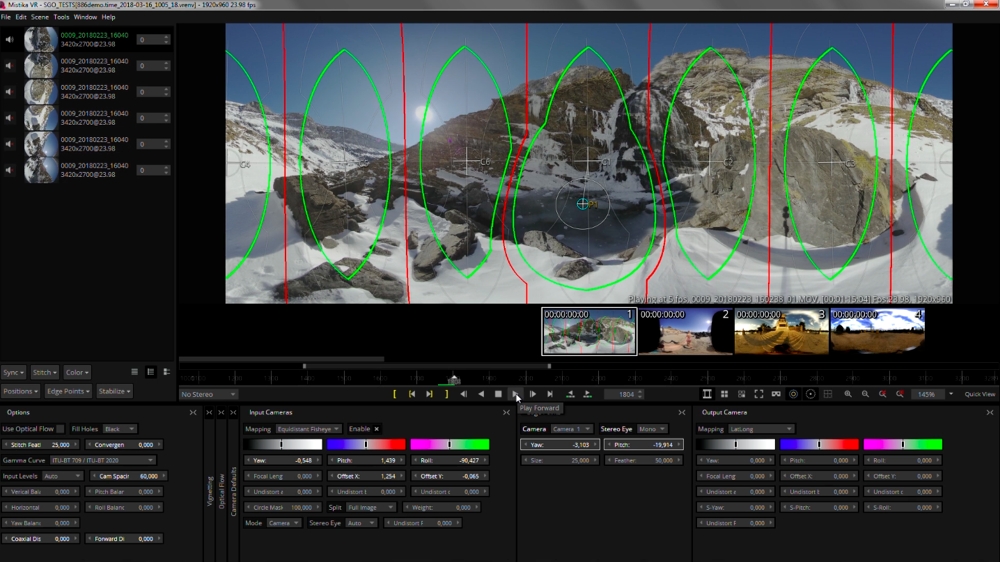 After you’ve captured the 360 video using your camera configuration of choice (perhaps six GoPros in an Omni or RIZE setup, a Nokia Ozo, a couple of back-to-back REDs or the Insta360 Pro, or even the Titan), you need to take that footage and stitch it all together into an image that can be viewed in a VR headset. You can also project it in something like the Holodome, or to be viewed in YouTube VR. Mistika VR by SGO is geared for just this purpose.

For well-shot footage, I found that Mistika VR gets a pretty darn good stitch right out of the box. With a slew of camera rig presets, you can dial everything in immediately to get a rough stitch to make sure things are feeling right, or to get a client to sign off on things before you really start digging into the fine stitch.

Mistika VR utilizes its own optical flow algorithms to analyze patterns between the different camera angles and will warp and adjust the imagery to resolve doubling up and misalignments along the stitch lines. But on top of that, you have tons of parameters to work with to refine even further: Dials for tweaking the yaw, roll and tilt of each camera or even the resulting stitch give you control for fixing wavy horizon lines, or recomposing so your main actor is in the right viewing space.

But the tool that kind of blew my mind is the edge controls. As each lens has distortion as the image approaches the edges, if something of interest (like an actor) is on the stitch line between lenses, it can get mushy and muddy. And no one wants that. So, Mistika VR gives you tools to add points along the stitchline, kind of like a rotospline. With this, you can shape the stitchline around the talent to utilize more of one particular lens that may have more fidelity. The actor, and you, don’t have to worry about artifacts occurring across their face.

The software, which is accelerated by Nvidia GPUs, is fast and supports tons of 360 rigs, and recently added the Blackmagic codec to its supported file formats. The only quibble would be that the UX needs a bit of love. It’s a little clunky to get around and feels like a Quantel Domino (if anyone remembers that). But outside of that, the math underneath the hood is solid and wholly impressive.

You can get a personal or professional license through a monthly or yearly subscription. Or you can buy it for 30 days or a year without renewal. The pro version gives you keyframing (absolutely critical), stabilization (pretty darn critical), stereo 3D workflow and render farm support. There may be other solutions, but in my time working with it — the time I spent stitching versus the time I spent troubleshooting — Mistika VR is well worth the investment for your 360 project.

Todd Sheridan Perry is an award-winning VFX supervisor and digital artist whose credits include Black Panther, Avengers: Age of Ultron and The Christmas Chronicles. You can reach him at todd@teaspoonvfx.com