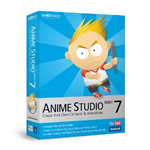 Anime Studio is one of those 2D programs in a 3D saturated market that has been running with larger systems, and appears to be holding its own. Up to version 7, Anime Studio has some tricks up its sleeve that I haven’t really seen in a 2D animation package. Sure, it has all the essentials: vector-based shapes, onion skinning, generating art within or from outside, etc. But there are a couple features that are either unique, or at the very least on the cutting edge.

The first of these features has migrated from 3D. Rigging a character with a skeleton is commonplace in the world of three dimensions. Anime Studio takes this concept and applies it to a drawing, providing the means to animate and retain the volume of the shapes. Well, “area” I guess, since volume requires an X, Y and Z. The obvious limitation is that you can’t turn characters from a particular perspective, but with some creative morphing and a pinch of sleight of hand you can get some sophisticated stuff.

The second standout feature is a physics-based dynamics engine which takes the burden (or possibly artistry) out of effects animation, like falling objects or rolling boulders, and allowing that newfound time to be put into the character running from the boulder. The dynamics can even be assigned to the character rigs mentioned above to create ragdoll interaction with stuff in the scene.

Other standout features are integration with 3D objects, sound recording tools, lip-sync tools to work with the sound tools and a large content library to get you started quickly. Furthermore, Anime Studio has a scripting language¾absolutely necessary for a tool to be useful in any sort of production. Oddly, in my humble opinion, Lua is the language of choice rather than the more ubiquitous Python, but it’s better than no language.

There is some mild criticism with incorporating into an established pipeline, but at $200, the benefits seem to far outweigh the investment¾perfect for smaller shops and those budding animators.

You may also like...
Related Topics:Anime Studio 7, Smith Micro, Software