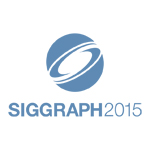 SIGGRAPH 2015, going on at the LA Convention Center August 9-13, will feature a dedicated space for the latest in virtual and augmented reality experiences — VR Village, in Hall G. The joint initiative from ACM SIGGRAPH and Emily Carr University of Art + Design includes a curated selection of immersive storytelling formats for attendees to explore, including a “nomadic VR experience” made possible by OptiTrack motion capture technology.

The installation, Holojam, was developed by Dr. Ken Perlin and his students at New York University. In it, participants will don untethered GearVR headsets and be transported into a virtual space, where they’ll contribute to an evolving 3D sculpture using wands. Up to five people will share the area at once, moving freely and appearing to one another as stylized avatars.

Participants will be tracked at wrists and ankles in addition to the headsets and want, with their position in the 32 x 34 area captured by OptiTrack Prime 13 cameras and tracked using rigid body solves in OptiTracks Motive software. The real-time data will be multicast via Wi-Fi into the Unity engine running on each headset, and bystanders can watch the virtual sculpture develop , and even scrub through it in time, on a large monitor next to the station.