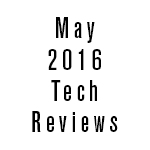 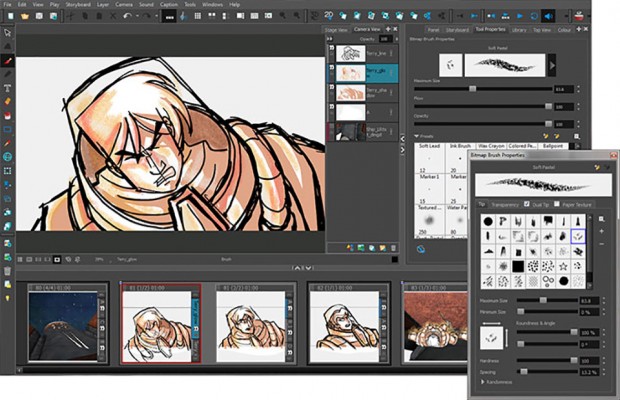 As someone who jumps back and forth between the media I animate in, I am a bit of a fan of Toon Boom stuff for my 2D animation needs. And as someone who storyboards the films he shoots or the visual effects he designs, I really like Toon Boom’s Storyboard Pro. Their latest version 5 is no exception.

One of the things I like most about Storyboard Pro is the integration between 2D and 3D assets. Version 5 boosts some of that functionality by including Alembic and Collada file formats to import — adding to the list of FBX, 3DS, OBJ and OSB. Once the model is in your scene, you can now animate sub-objects on the model, like a door opening, for instance. Further integration between 2D and 3D is shown through the ability to snap elements to 3D objects — a screen on a cell phone, 2D flowers in a 3D flower pot, that kind of thing. The camera is 3D as well, so when it moves, everything sticks in place.

As far as editing the storyboard into an animatic, Storyboard Pro has a timeline, which can be manually assembled. Or, you can import an appropriately tagged Final Draft file and Storyboard Pro will auto-create an assemble cut based on the script. Once you get a cut, you can conform it to Final Cut Pro or Premiere. Or, you can export frames to Photoshop, retaining the layer information so you don’t end up with a flat piece of artwork. As I was writing, Toon Boom pushed a 5.1 version out which added the ability to make and control animation on a layer basis. While an animated camera has always been there, this kind of granular control is new.

I do have a quibble with the timeline editor. While it’s totally functional, I would prefer to have a more typical non-linear editor format with multiple tracks of video. SBP5 does have multiple tracks of audio, which is fantastic — but that extra little function would just make things easier to work with. Or perhaps I just need to stop being lazy in my ways and get used to it.

From a strictly asset management process, Storyboard Pro, like other Toon Boom products, a bit messy and directory structure dependant. So, migrating projects becomes an issue. If you don’t transfer all of your dependencies, then the project breaks. To alleviate this, a packing function has been added to saving, so that you can essentially save out to an archived, self-contained file that can be extracted later. So much cleaner.

Lots of good stuff, and Toon Boom is actively developing and pushing new versions to keep up with new features and fix old bugs. Like most other software, you have the option of a desktop subscription on an annual or monthly basis, so you can receive your updates — forever!

Allegorithmic released their latest version of Substance Painter with a bucket full of advances and tools. For those of you who don’t know, Substance Painter allows for one to paint directly on 3D models. Nothing new there, we’ve had that for decades. But Substance Painter is fast, interactive, and best of all it lives in the PBR workflow, which means that you are painting materials that behave in a Physically Based manner (or at least as physically based as our current technology allows). And this lends itself to better looking, more realistic models.

Along with the already impressive and innovative painting tools such as particle painting and utilizing AOVs (ambient occlusion, normals, etc.) to create “smart” materials,  Allegorithmic has focused a good deal on listening to the wants and needs of their user-base who vocalize these through Allegorithmic’s forums as well as social media.

Firstly, Substance Painter 2 can use NVidia’s Iray renderer for fully realized images for your work without porting over to a full-blown 3D package to spit out some results. Iray utilizes the PBR information from the Substance materials for gorgeous results. Before, the renderer was solely OpenGL, which made the preview fast, but not necessarily accurate. By hybridizing between GL and the GPU accelerated (and highly accurate) Iray, you get the best of both worlds. Add in some smooth post effects like depth of field, glare, vignetting and lens distortion, and you can spit out some seriously cool imagery.

The most demanded toolset consists of clone, blur and smudge brushes. Not only did

Allegorithmic provide, but they supplied on a number of levels — literally. The new tools can work on all of your channels at once (diffuse, reflections, bump/height, etc.), and they are non-destructive. So, the histories of the brushes aren’t baked in — you can go back in and modify the strokes.

Other advances and modifications include swapping between perspective and orthographic views (seems minor, but definitely needed), concatenation of shader effects for more complexity; “smart”, savable and reusable masks; and, of course, a robust store for content including super high res material scans from Allegorithmic themselves and more from Texturing XYZ.

You can get Substance Painter in two flavors: independent and production. And of course, there is Substance Live utilizing the subscription model that is becoming more and more accepted. I’m seeing teasers about incorporating UDIMs and Linux support — which thrills me to no end. But, I haven’t seen it implemented yet.

Thinkbox Software is well known for Krakatoa, the particle renderer that can manage a gazillion particles. Its also known for Frost — a mesher that will take particles and make a cohesive surface, like water. So they had these two technologies in their hands and said, “Hmm, lots of points. Make surfaces. What other industry or technique could use this?”

This was the inception of Sequoia — or, at least, how my screenwriter brain envisioned it. You see, Sequoia is quite literally a point cloud meshing tool. The points can be from any number of sources: LIDAR scans, photogrammetry, geo data, etc. Sequoia will then mesh the points into surfaces using the radius, or culling out stray points based on number of faces or the surface areas they take up — meaning, if you have points that are sitting off by themselves, they probably don’t need to be there. The resulting meshes are generally water-tight, because of the Frost algorithms to mesh like it’s a fluid. But, Sequoia has advanced methods of stripping the back faces, if that’s what you need.

Additional tools are provided for projecting images onto the points or mesh — if the points didn’t already come with color data. One can align the projection camera by associating points in the image to points in the data cloud.

This is all well and good, and quite impressive on its own. But what is more impressive is what is taking place under the hood. The dataset are invariably enormous. There is a lot of data we are talking about. Sequoia takes that data and saves it into an efficient cache file. Once converted, you can cull out areas of points — including meshes — as well as combine culling areas to see just what you want. But Sequoia is also dynamically loading and unloading data based on what you are doing; a process so efficient that you can view data on a laptop or a tablet.

Furthermore, the processing of all this data is handled by Sequoia in an asynchronous manner — a mini-queue of tasks is created, and it consistently processing different functions on the data — set up as a node tree that can be changed and modified in a procedural way. Despite the processing going on, the balance always keeps your interface responsive. You can even have multiple documents open processing multiple point clouds, or even different iterations of the same point cloud for testing settings.

Not surprisingly, Sequoia will save out to Thinkbox’s XMesh format (amongst others), and it immediately hooks into Thinkbox’s render manager, Deadline, for processing meshes on a farm.

It’s not needed by everyone, and it’s not as sexy as Krakatoa, but with LIDAR becoming more and more ubiquitous in the visual effects industry, the need for tools like this is only going to increase.