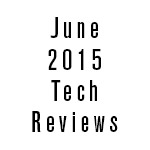 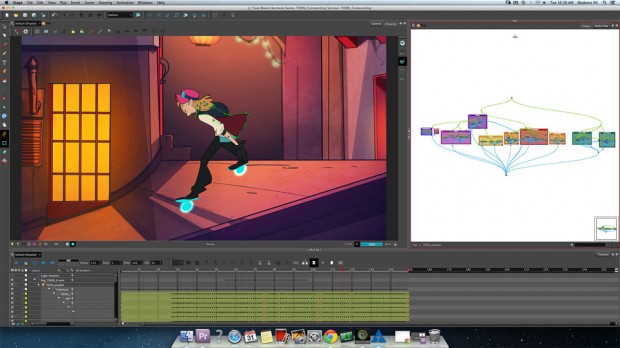 It wasn’t so long ago that I was covering Harmony 11 from Toon Boom, when suddenly Harmony 12 is out with some spiffy new features along with enhancements to the features I already love.

Being initially trained as a traditional animator — yes, on paper — I find it a joy to work with the rasterized layers and bitmap brushes. The jump from Harmony 10 to Harmony 11 was amazing. But, the Harmony 12 brush tool set has expanded to include a ton of naturalistic brushes to get a more organic feel. The toolset lets you customize the brushes to taste, and even mix and match different brushes together. I love the feel and responsiveness to the brushes. It gives me a great deal of satisfaction watching my rough animations playback with the life that flipping through your paper felt like.

Lights shading has been added. How do you light a 2D image, you may ask? The old method was to go through on a second pass and animate shapes for the highlights and shadows. Not fun. So, Toon Boom has figured out a way to provide that by allowing you to generate a pseudo-3D object from your animation using normals to fake volume (a commonly used tool in 3D animation and games). Now you can dynamically light your character, giving it some dimensionality. The approach isn’t the most “press-one-button-and-go” feature that I’ve ever seen, but it will definitely get you familiar with Harmony’s extremely powerful node-based tools.

OFX plugins can now be used in Harmony. So, high-end image processing from places like GenArts, RE:Vision Effects and Digital Film Tools can be applied to your animations. Flares? Glows? Godrays? You got ’em.

Toon Boom released a Unity software development kit for free in conjunction with Harmony 12’s new simple bones and animation setups that provide a way to develop games on the Unity platform using all the crazy cool tools already in Harmony. If you have a game idea using your 2D animated characters, there are no more excuses.

Lots more stuff to look at and choose from to make animation easier and more pretty, but as of my last review, Harmony was out of the price range for those passionate animators who may not have the budget of a studio. This has changed. Joining an ever-increasing group of software developers, Toon Boom has moved into a subscription-based model, with three tiers of pricing to tailor to your particular needs. Starting at $15 per month for the base-level Essentials, one can get started for the price of three Starbuck’s Frappuccinos. And if you are ready to go into full production, you are looking at $73 per month (if bought on an annual subscription). This is far less than the previous price point of thousands of dollars, and much closer to attainable.

I’ve been having a great time playing with it. And BTW, for the best result, get yourself a Wacom Cintiq! The money you’ve saved in the new price for Harmony just might allow for that luxury. 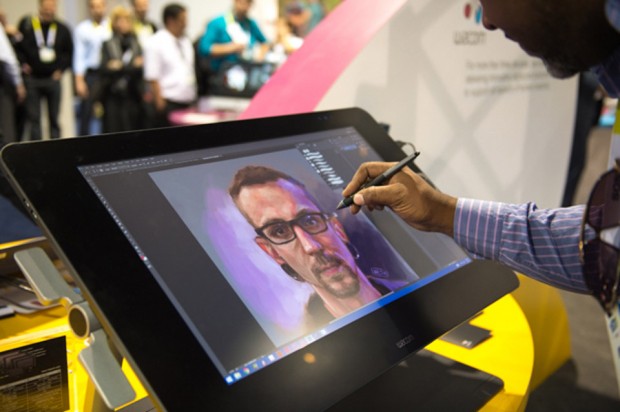 I thought that this was going to be more screen than a normal artist could handle, but I was incorrect. I quickly fell into the groove and was quite at home, especially for painting- and drawing-based software like Adobe Photoshop, Autodesk’s SketchBookPro, BlackInk (one of my faves), and animation programs such as ToonBoom Harmony and SmithMicro’s Anime Studio.

The Pro Pen has its 2,048 levels of pressure sensitivity and ammo kit of nibs — including a few that are made of felt — that convey the softer, tactile feel of pen on paper. It has a great response with little discernable lag. Well, to be honest, if you are looking right at the cursor and the pen tip, then you’ll see the lag. But again, to be brutally honest, if you are watching the tip of your pencil as you draw, you may need a few more years of practice. (Bring on the hate tweets, amateur artists. @TeaspoonVFX.)

The most innovative part of the new tablet is that Wacom has removed the Express Keys from the surface of the tablet, and put them into a handheld remote control. This provides for a clean, one piece of glass over the top of the entire device. The large bezel provides room to place the remote anywhere that feels comfortable for your work style, and it has some metal in it, which gives the magnetic back of the remote somewhere to stick. I absolutely love this change.

Wacom also has removed the stand from the previous model, which was as dense as the core of a neutron star — necessarily so to cantilever the weight of the tablet. The stand is still an optional purchase so that you don’t lose the ability to cradle the tablet over the table and in your lap. But there are a couple of foldable legs with the shipped model so that you can get some angle on your drawing surface.

Overall, I don’t think I can work without it — especially for illustrating and traditional animation. Curse you, Wacom! 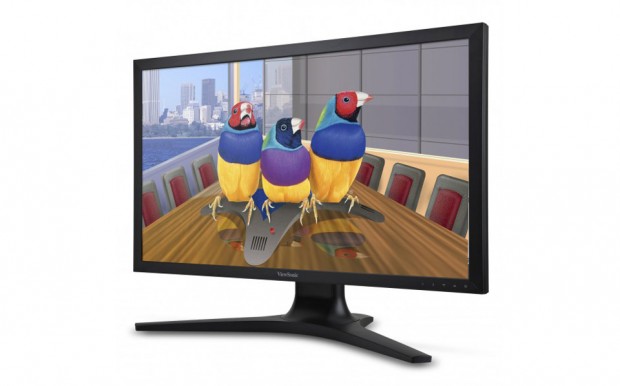 For those out there who like their resolution huge and their colors deep, ViewSonic has the VP2780-4K. This is a mid-priced monitor — it costs about $1,000 — aimed at professionals who are cost-conscious but need the color-accuracy for their clients. And it looks like, at a reasonable glance, that it delivers the goods.

Each monitor is tested before it is shipped, and my monitor came with its calibration grade report ranking its sRGB and Native colors at an average Delta-E less than or equal to 2 (Delta-E being the distance between two colors, 1.0 being the lowest number then human eye can perceive). Not too shabby. This means that my monitor is tested at near the targeted 100 percent of sRGB’s color range. ViewSonic also states that the monitor will hit 80 percent of the AdobeRGB gamut. Along with the wide color, ViewSonic has a three-year warranty that covers any dead pixels.

The display itself is crisp through its matte, anti-glare LCD surface surrounded by the thin 22mm bezel. There is no flicker as it displays 3,840 by 2,160 resolution driven through the DisplayPort jack by an NVidia K5200. Additional inputs include another DisplayPort, but mini-size to Apple specs, plus an HDMI 2.0 jack (also supporting 60mHz refresh at 4K), and a couple more MHL jacks.

The mount is not the most robust piece I’ve ever seen, but the monitor is so light that it doesn’t require much. The mount is also fully adjustable and can be swiveled 90 degrees for the portrait style that it so popular with the coders in the room, although, having coders typing text on a 4K, wide-gamut monitor seems a bit like overkill. That could just be me.

The primary target — the color-grade specialists — I feel should be reasonably happy, or at least as reasonably happy as one can get living with a Vitamin D deficiency from spending most of their waking lives in a dark room. (And, yes, I know from whence I speak, being a visual-effects supervisor and all.) And the facilities will be happy because compositors (the other color sensitive artists) will be able to have color-accurate monitors without blowing the budget.

Todd Sheridan Perry is a visual-effects supervisor and digital artist who has worked on features including The Lord of the Rings: The Two Towers, Speed Racer, 2012, Final Destination 5 and Avengers: Age of Ultron. You can reach him at todd@teaspoonvfx.com.