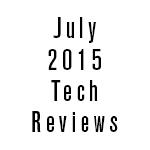 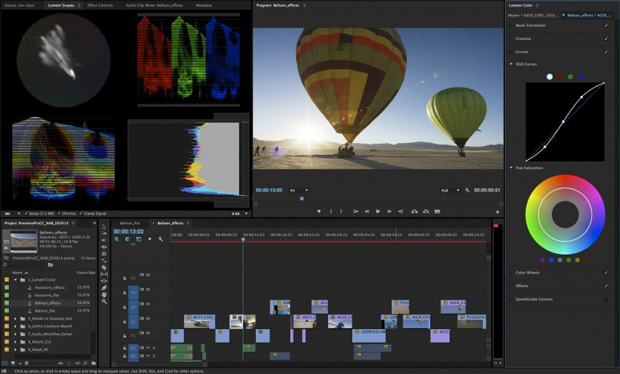 Adobe Premiere has been around for quite a long time. I was putting together cuts for CG animation back in ‘92 — literally the very early beginnings of non-linear editing. But over those years, Adobe struggled to frame the software as a professional tool as it competed against Avid.  It took the creation and adoption of Apple’s Final Cut Pro into the professional circles to crack Avid’s foothold. And then, a few years ago Apple created Final Cut X, and seemingly discarded the needs of the niche group of career editors in favor of the very broad demographic of users making videos of their four-year old’s birthday parties. With that misstep (my words), Apple opened up a crevice that Adobe deftly jammed their toe into and hasn’t stopped climbing. Premiere Pro CC 2015 has continued this upward trend and has only accelerated.

In the latest version, Adobe is focused on making the whole experience of creativity something

that permeates the life of an artist. They have mobile apps in the form of Premiere Clip and Hue, which respectively allow for rudimentary video editing on your device and capturing color schemes from the world around you. You can now migrate your Clip edits directly into Premiere Pro for refining and finishing. And through Hue, you can bring in a color palette through the Lumetri color system and apply the palette to your edits. This dynamism and spontaneity is a key component of simply being creative that intrigues me about Adobe’s direction with this.

But that doesn’t mean they haven’t thrown in technical tools to increase the ability of the editor to rough out things that would normally be sent to a compositor or colorist. Lumetri templates from SpeedGrade can be brought into Premiere Pro, and while you can’t create your own templates from within PP, you can edit the ones that you import. Additionally, the templates can be shared for collaboration through your libraries in the cloud.

The new face tracker (see After Effects review) is also available in Premiere Pro, allowing for quickmasking or when you need to mosaic out the face of someone who refused to sign the release form. And for interviews, a bit of witchery called Morph Cut has been incorporated, which will smooth out those dreaded jumpcuts by using a brew of smart transitions and face tracking tech to blend together into a seamless cut. Speaking of seamless cuts, Adobe created Time Tuner, which allows retiming of clips without speeding up or slowing down. Instead, it analyzes areas of less activity and shaves off time in those areas (for when you need it shorter).  Technically, this isn’t part of Premiere Pro — it’s in Media Encoder. But, for all intents and purposes if you have Premiere Pro, you have Media Encoder.

Overall, I like the path Adobe is taking with providing the ability to record inspiration and then have access to it from many places in many programs. I’m not sure about editors doing color grading and visual effects — I feel there is a point where one person can’t do everything, so the dilution of skills makes for a great deal of mediocrity. But, I’m open to be proven wrong. 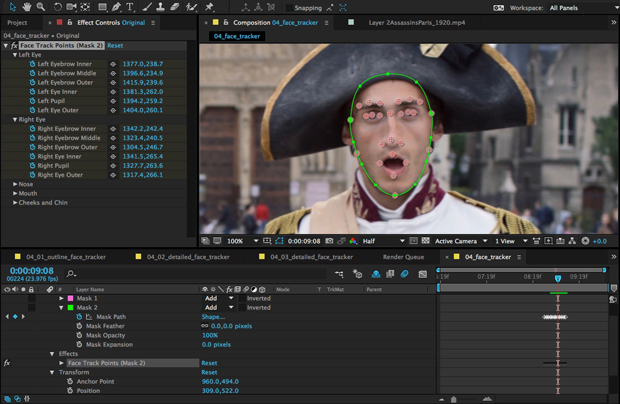 For After Effects, I feel the changes are less robust and far reaching than Premiere Pro’s. First thing’s first: performance. I’m always banging my head against the wall with how gluttonous After Effects is with RAM — I have 96GB in my workstation and I can fill that up in no time. I know there are ways to manage that, but I would much rather have After Effects be smart enough to dynamically flush out what it no longer needs. Presumably, this is alleviated with the new uninterrupted preview. According to Adobe, there has been an overhaul under the hood to make performance better, so code has been optimized. This makes way for a more dynamic experience as you can have the preview continue to play as you make alterations to the comp. I suspect that while adding a hue/saturation to a bouncing circle is incredibly interactive, actual production comps with 16-bit 4K Red files may not be quite as responsive. (I haven’t had a chance to throw AECC2015 into an actual production to try and break it.) Cynicism aside, I do feel that the goal is admirable and will just get better as hardware gets more and more robust. And, if it solves After Effect soaking up 94 GB in 15 minutes … I’m down.

AE also has a new facial features tracker. An earlier version came out that was generally good at tracking faces, kind of a bare-bones planar tracker, but this new one kicks up the game by tracking moving facial features like eyes, brows, mouth, etc., provided points for each (if you are clever, these could be connected to other elements) or drive beauty work. As mentioned in the Premiere Pro review, this same tech is available to the editor as well, and it’s one of the key components for the Morph Cut.

The Face Tracker also drives the much tauted Character Animator, which provides a way to setup an animated character in Photoshop, bring it into After Effects, and then tie it to a webcam performance to drive and “automate” animation and lip-sync. This is something that I have a fundamental problem with. It’s not the tech that bothers me. It’s the conceit that animation is the mechanical function of things moving over time. It is not. Animation is an art form. Just because you now have a tool to record your performance and make stuff move doesn’t make you an animator, and with ease of use comes a lack of respect for the original art form. Now that Character Animator is universally accessible, we are going to see a spike of horrible animation along with TV shows and YouTube channels that will entertain only children under the age of five.  Later, actual animators will learn how to use it to best effect and we’ll begin to see actual art. I think the technology has some incredibly smart people behind it, and it has a ton of potential. But I’m withholding my joy until it has matured a bit.

Lastly, AE is part of the whole creative Adobe world where you can access all of your inspiring shapes, color palettes, video clips and such that you have collected with your phone while out there experiencing life. This integration, and not Character Animator, is what makes the new After Effects special and worth migrating to … but only if you incorporate the Adobe Library into the way that you work. 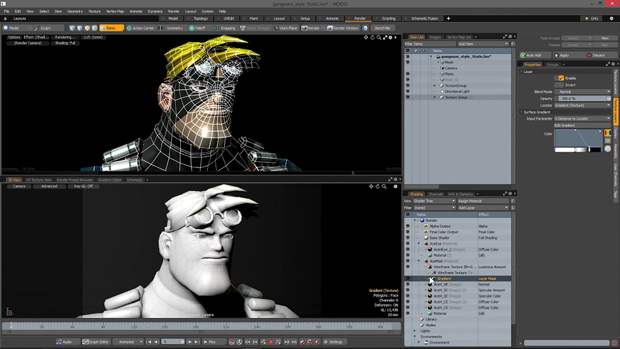 I’ve been waiting for the 901 version of Modo for a while now, and now the wait is over with some fantastic new features to show for it.  And “some” is an understatement.

My personal preference is to use Modo as a modelling tool. It’s not a terribly myopic stance since Modo came out of the gates strong using its modelling tool to leverage its way into the industry. And the toolset has not been ignored.: MeshFusion, which was once a separate plugin, is now built-in and fully featured, allowing for complex booleans between subdivision surfaces, dynamically controlling the parameters to dial in the look. Plus, mesh sculpting tools have been enhanced to deal with multiple levels of resolution and the MODO team has finetuned the application of vector displacement to play better with other 3D software. And it doesn’t stop — you can set symmetry on models based on the spacial structure of the model, rather than depending on a particular world axis, or hope that an asset has been prepared to be perfectly symmetrical (who likes perfect symmetry anyway?). Filling holes with quads. Autocapping during slices. Linear and Radial alignment tools for controlling edgeflow. If you are a modeller, you should definitely be excited … And I haven’t even touched on the UV tools and texture painting tools which now support vector-based artwork.

Modo utilizes a full physically-based renderer (and Chaos is building a VRay for it as well), along with new materials to support it. Many of these features migrate directly into the GPU-accelerated viewport for viewing the assets in a photoreal environment allowing for dynamic assessment of surfaces in different lighting situations and environments. And, there are new rigging features, animation, particles, dynamics. hair meshes … you can pretty much do everything.

I prefer to model and UV in Modo, and then head to other programs for animation, lighting, etc.  But that doesn’t mean it’s the only, or even the best, way of doing things. Modo is quickly growing into a self-sufficient all-in-one program that, given just a bit more maturity, could start to encroach into a niche currently held by more entrenched 3D programs. I could be wrong, but I see the individual artists driving the charge to welcome Modo into the industry. It doesn’t hurt that its developing company, The Foundry, happens to have a number of products in the game that are considered industry standards. It’s just going to need to time to allow for wider acceptance into larger, legacy pipelines.