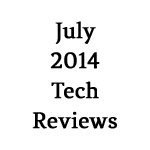 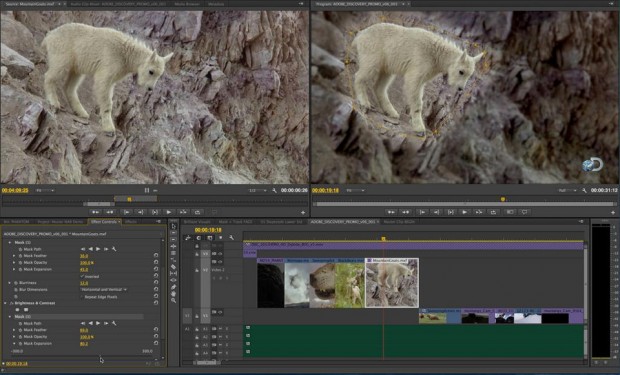 There is a point in software development where a company must pivot on what they are focusing on.

With Adobe’s Creative Cloud suite, I believe that while they are adding additional features into the toolset, they are turning more toward refining how the tools work together.

They’ve already begun to establish this connectivity, but with the latest versions, these connections are becoming more robust, with Premiere Pro being the center hub for the other production-centric CC products.

And before all the compositors, sound designers, and colorists get bent out of shape, you all must concede to the fact that editorial is the driving core of the production. It just is. All post-production decisions are determined (and changed) because of the cut. So I think Adobe has made the right choice.

The most intriguing, and perhaps most innovative, features are between Premiere Pro and After Effects. Frequently in broadcast work, there is a lot of information embedded into design work – like for lower thirds. Often that requires going back to the compositor, changing the data, re-rendering and letting the editor know it’s done. Lots of points of failure in that path.

Now, the After Effects artist can flag text in the comp so that the editor can access and change it from within Premiere Pro, boiled down to just those items he needs to worry about. Used correctly, I think this can be a total time-saver.

Editors also can create masks in Premiere Pro — and track them — without having to request it from the compositor. That data is easily ported back to After Effects for more refined work.

And speaking of masks, the new flexible masking tools allow you to mask effects. No more making additional layers or adjustment layers and masking those. Just make a mask and apply it to that color grade. I’ve only been waiting 20 years for this feature. Game-changer. Tip to AE artists: Learn this. Just ask Nuke guys how important this feature is.

After Effects has a new keying power pack with a preset of Keylight, Key Cleaner and Advance Spill Suppressor, designed specifically with troubling greenscreens in mind — especially with motion blur, transparency and spill.

Prelude, Story, Audition and Media Encoder received a few minor upgrades aiding in the overall workflow, especially with controlling and tracking metadata, but the big changes are listed above. And some of them are, indeed, big changes within deceptively small tweaks. 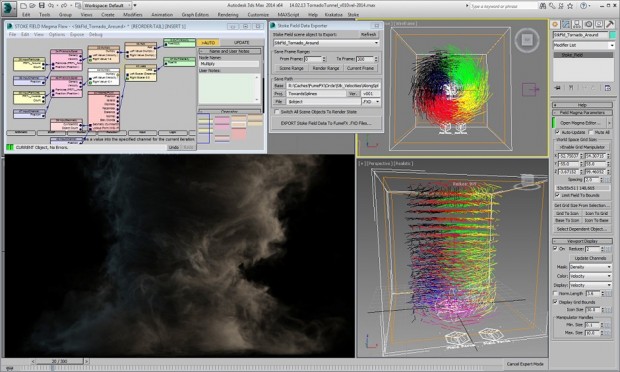 Thinkbox always has the coolest tools. Honestly. They are smart, create fantastic imagery and cater to the small niche of smart VFX guys who make that fantastic looking stuff.

Stoke was released last year as a tool to quickly manipulate advections and forces to drive the motion of particles, which are then frequently rendered in the sibling Thinkbox software Krakatoa or meshed in Frost. There is additional emphasis placed on the controllability of these fields. The fields could be derived internally or from other Max particle systems like Particle Flow, Thinking Particles or FumeFX. Some external systems like Realflow BIN files are supported.

Stoke MX 2.0 grew exponentially in scope and functionality and has enveloped two other Thinkbox products – Genome and Ember — combining node-based Magma from both, as well as Krakatoa, to create an extremely robust and procedural system for driving hierarchically independent fields and hierarchically dependent field simulations. The approach feels much more like Houdini than it does 3ds Max.

And this is not the only expansion. Through Genome, Stoke can drive fields through and from mesh data, and the field access has been expanded to include the 3ds Max physics systems mCloth and MassFX. And Stoke fields are not only driven by other sources, but additional particles can be generated, inheriting the data from the original source particles or mesh — including velocity, color, ID — with the option of manipulation with Magma.

The resulting data can not only be sent to Krakatoa for rendering, but any other renderer that supports atmospherics (Scanline, V-Ray, FinalRender) can also handle it through the Stoke Atmospheric Effect. The data isn’t limited to 3ds Max either. It can be exported back out to DreamWorks’ opensource VDB format, or Imageworks’ F3D for volumetric rendering.

Further functions include fast disk caching for particles, scripting support and plenty of tools for viewing particles and field data.

If all this sounds like a bunch of gloop-gorp, it probably indicates that brains more powerful than us are creating things that we don’t even know we need yet. It took me a while to wrap my head around what Stoke is doing, but now that I’m down that rabbit hole, I may never create a simple particle system again.