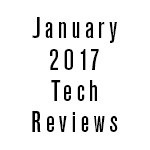 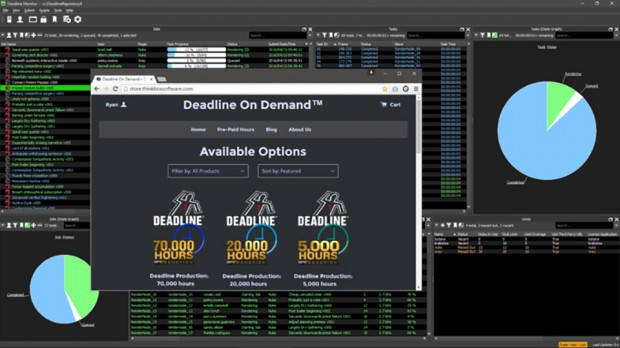 I’m a fan of Deadline. I don’t think that’s a secret. I use it for my own studio, TeaspoonVFX. I promote it at the studios that contract me. I’ve used it on big feature films, on little museum pieces and on personal animation projects. I’m using it as I write this to render out a substantial Nuke composite. But what is new in Deadline 8.0?

Well, the game-changer for me is that Thinkbox has setup an e-commerce site to manage software license rentals. You see, I only have a couple machines at home to render on, so my Deadline requirements are minimal. But every so often, I have to render something huge — by tomorrow. Deadline has had tools to quickly and easily spin up cloud-based servers on Google, Amazon and Microsoft — and 8.0 provides even easier step-by-step procedures — but now you have 20 render boxes! And there’s you (or me), with a meager two-box license (which is free, BTW … you can use Deadline for free if you only have two machines). So how do you bring your new farm into the mix?

Thinkbox allows you to login, and start your meter running for the extra Deadline licenses for the cloud slaves, billed out at a per-minute rate. You aren’t billed when the slaves aren’t rendering. They call this Usage Based Licensing. This is great for small houses or freelancers who don’t need a hundred machines per month. They just need it now, for eight hours. But it’s also good for big studios with thousands of slaves who need more! Yes, I’ve seen it happen.

“Oh-ho!” you might say, “I don’t have enough Maxwell licenses for my new 20 cloud machines.”

Thinkbox has made some deals with 3rd party providers to issue UBLs to go along with your Deadline licenses. IRay, Nuke, Katana, Maxwell, Mental Ray, Realflow, Redshift, V-Ray, and Yeti are just a sampling of software available now — more to come, I’m sure. And don’t forget Thinkbox’s other software, like Krakatoa and Sequoia. Yeah, you can rent those, too. By the minute. You can essentially fill up your Nuke tank with Nuke gas, and when you use Nuke on the farm, you can keep compositing until the gas runs out. And then you refill it!

The other improvements are important, but not quite as sexy. You can securely login to remote farms without a VPN, or mount repositories locally (repositories are the things that store all the jobs and are controlled by a Mongo Database). The Deadline Monitor (where you watch your jobs) has had some recoding in C++ to speed up response time, and longer processes are pushed into the background so the Monitor remains responsive. Just to name a couple updates under the hood.

Anyway, I’ll be looking at some other farm managers soon. I’m sure they’re great. Deadline just happens to be my biased favorite. 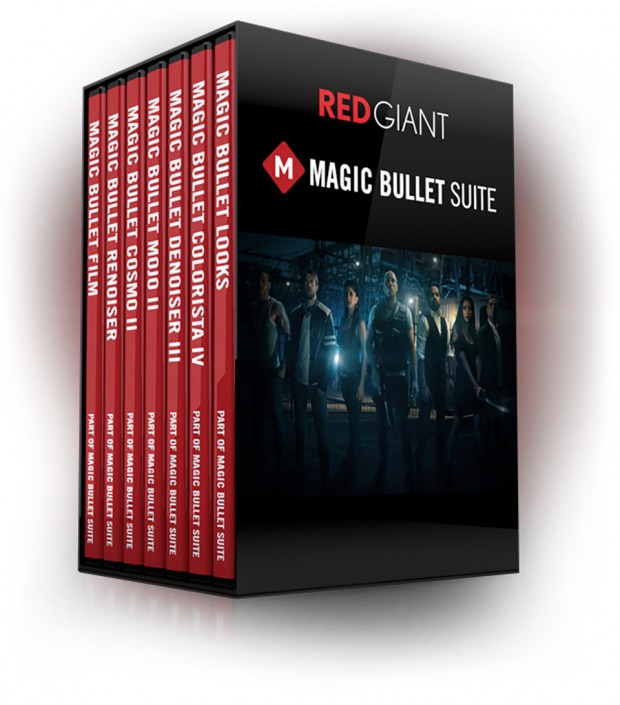 Red Giant is known for its array of compositing tool suites for After Effects, Premiere, Final Cut, and Avid, providing tools for generating effects, keys, particles … and color grading through the Magic Bullet Suite.

The latest release has a bunch of cool new things, but the biggest and best is that the entire suite has been rewritten to take advantage of the GPU on your video card to accelerate the calculations. And, on Adobe products, Magic Bullet taps into the OpenCL code driving the Mercury Playback for near real-time feedback (depending on the power of your card, of course)

Magic Bullet Looks, the tool to quickly dial in different grades for your footage, makes auditioning different looks even faster and quickly saving favorites and custom presets (on top of the multitude of packaged presets). You can literally slide your mouse over the sample and view the results. And if you sort of like the look, but maybe it’s a bit too heavy? You can adjust a universal slider to tame down the entire look.

Colorista provides tools from a professional grading suite, but in case you aren’t an expert colorist, there is a guided color process to take you through the tried and true stages to get you where you need to go. But even though less experienced user can use it, the pro stuff isn’t excluded. Colorista will import LUTs (LUT Buddy will be phased out), and allow for point-controlled RGB curves. But most significant, in my opinion, is that Colorista supports Log colorspace, and the tools adjust their effect to behave appropriately.

Magic Bullet has always had Denoiser for removing grain from film and noise from digital sources. Like everything else, the Denoiser has been rewritten from scratch to use the GPU and is powered by tech developed by wrnch — a game/computer vision/AR startup funded by Mark Cuban. But that’s not the best part. New to the suite, Renoiser, puts grain BACK into the footage to provide a controlled film look with a small set of presets that I’m sure will grow.

Mojo, which is kind of a streamlined mash-up of Looks and Colorista, gets your footage to “Hollywood”-style grades faster with fewer controls (and consequently less control). Along with preset and a few new controls like vignette, temperature, tint and a universal strength, Mojo still abides by the color science under the hood and adjusts its math for Log or Flat footage.

Cosmo also has been sped up along with getting better results to smooth out and “beautify” your actors. An updated skin sampler acts as a keyer to identify and isolate skin tones so that you can control those features without affecting the other aspects of the frame.

Everything is revamped. And what’s kinda cool is that you can use each in isolation as their own plug-ins, or you can use them within Looks to bundle them together as a preset that you can retrieve and reapply. The whole suite is pretty fantastic to add punch to your footage, and I’d say essential for those budding filmmakers who don’t have a budget to hire a Resolve grading suite with a colorist. (Although Red Giant is available for the DaVinci Resolve.) 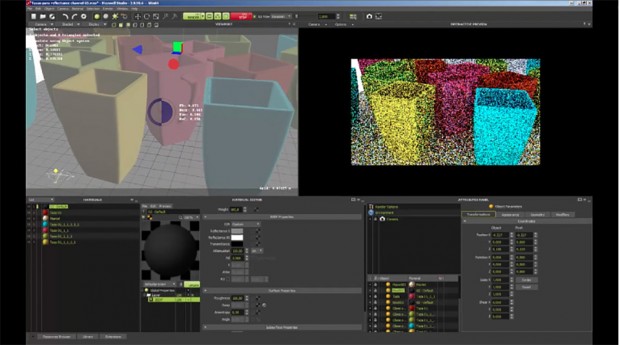 To stay with a GPU-accelerated theme, we move over to the latest release of Maxwell Render (version 4.0), from NextLimit, the people in Spain who brought us Realflow!

Maxwell has been around for quite a while — a bit over a decade since its public release. It just hasn’t been given the credit it deserves among the bevy of render engines. And maybe it got a slow start because its foundation is all about physical accuracy — and back in the early oughts, physical accuracy came at a price. It was beautiful, but slow. And productions need beautiful, but fast, if not completely accurate. As it matured, and CPUs got faster, and you could fit more of them into a machine, Maxwell became more viable as a production tool.

With Maxwell Render 4.0, they leapt over to the GPU to speed up production and rendering dramatically, sometimes by a factor of ten. The progressive renderer will be familiar to V-Ray, Mantra, etc., users as the image starts rough and just continues to get more and more refined. But now it’s being helped by your NVidia Card — yeah, one downer for the Radeon and OSX guys, Maxwell is diving into the OpenCL code, so not as much benefit for y’all.

And GPU rendering isn’t the end-all/be-all. You don’t get a benefit with highly complex light transports (indirect lighting, sub-surface scattering, etc.), nor does it work very well with larger scenes because the RAM limitation on graphics card doesn’t allow you to store the scene on board for rendering. Also, GPU currently only supports a limited number of AOV, so … if you want all the things, then CPU is the better option.

That said, you definitely get a pay-off in speed while prototyping the lighting and lookdev before switching to the CPU for fine-tuning before final renders. And speaking of fine-tuning, NextLimit has released a standalone version of Multilight for free! Multilight has previously been bundled into Maxwell Studio. It reads .mxi render files from Maxwell and stores the light from discrete light sources and combines them together. With the use of sliders to control the light contribution as well as camera settings, you can audition tons of light setups to show clients — a boon for architecture, for sure. The interface for the standalone is sleek and clean and easy to pick up. It would be terrific to export the settings of a client-chosen image back to Maxwell for final renders (or maybe there is! I need to hunt around a bit more).

NextLimit has revamped its online materials library with a curated set of over a thousand optimized Maxwell materials for users to grab and download. Searchable and filterable, the library should be able to get even the beginnerest of beginners a jump off point for making pretty pictures.

Overall, it’s a good release for a beautiful product. A little sad about some of the GPU limitations, but a few solutions are on the roadmap, and some will just have to wait for larger capacity GPUs.