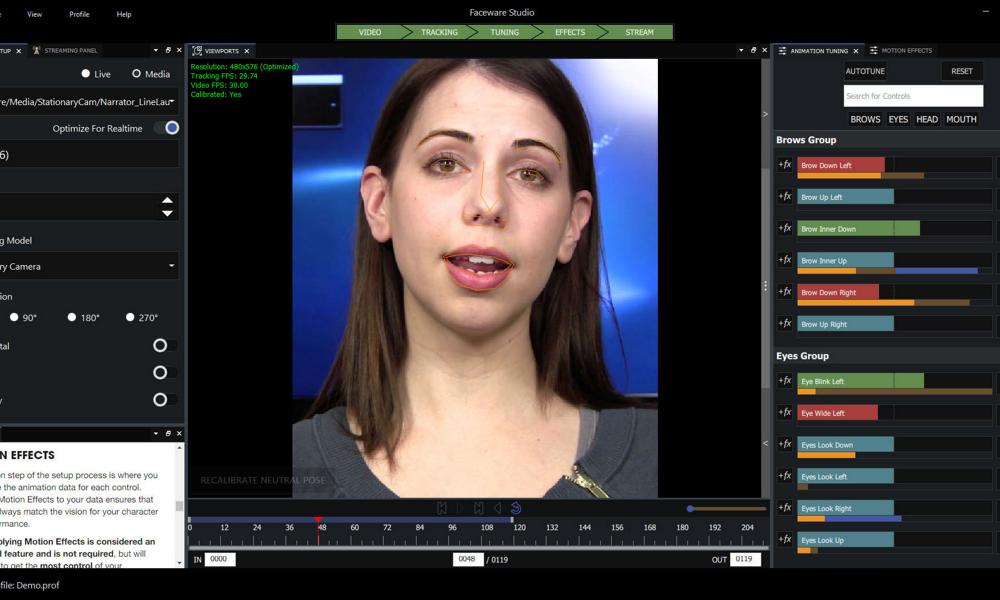 Faceware Technologies, the leading provider of markerless 3D facial motion capture solutions, today announced the release of Faceware Studio, a new platform for creating high-quality facial animation in real time. The new software is available to try or buy from the company’s website.

Faceware Studio is built from the ground up to be a complete replacement for the former Faceware LIVE product. Studio reimagines the real-time streaming workflow with a modern and intuitive approach to creating instant facial animation. With single-click calibration, Studio can track and animate anyone’s face in real time by harnessing the power of machine learning and the latest neural network techniques. Artists are given the tools to tune and tailor the animation to an actor’s unique performance and build powerful additive logic with Motion Effects. The data can then be streamed to Faceware-supported plugins in Unreal Engine, Unity and MotionBuilder (and soon Maya), for live streaming or recording in-engine on an avatar.

“This is more than just a rebranding of our LIVE product – Faceware Studio is a complete re-engineering of our real-time platform,” said Peter Busch, VP of Business Development at Faceware Technologies. “Based on what we’ve learned from the market over the past few years about how people create and work with realtime facial animation, we re-thought the entire product from the ground up to make it easier to use, more intuitive, and to produce higher quality animation. The initial response during the beta was extremely positive, and we’re excited to be releasing it for all of our users.”

Enhanced Facial Tracking Technology: Studio contains sweeping updates to our underlying tracking technology, leveraging the latest machine learning techniques to improve the quality and robustness of our tracking and animation. Users will enjoy better results across an even wider range of cameras and capture scenarios with both live video and pre-recorded media.

Real-Time Animation Viewport and Media Timeline: Users can see their facial animation from any angle with Studio’s fully-featured 3D animation viewport and use the Timeline and media controls to pause, play, and scrub through their media to find ideal frames for Calibration and to focus on specific sections of their video.

Dockable, Customizable Interface: A modern and customizable user interface with docking panels and saveable workspaces that allow for a completely personalized setup.

Improved CPU/GPU Performance: Studio is greatly optimized to create better and faster results while using less resources than its predecessor. Along with the optional “Optimize for Real Time” feature, users will enjoy higher frame-rate tracking across a much wider range of hardware.

Anyone interested, including current LIVE users, can head to the website to begin a trial of Studio.

Users of Faceware Live who have active support can upgrade to Faceware Studio easily. Contact sales@facewaretech.com for more information on costs to upgrade. 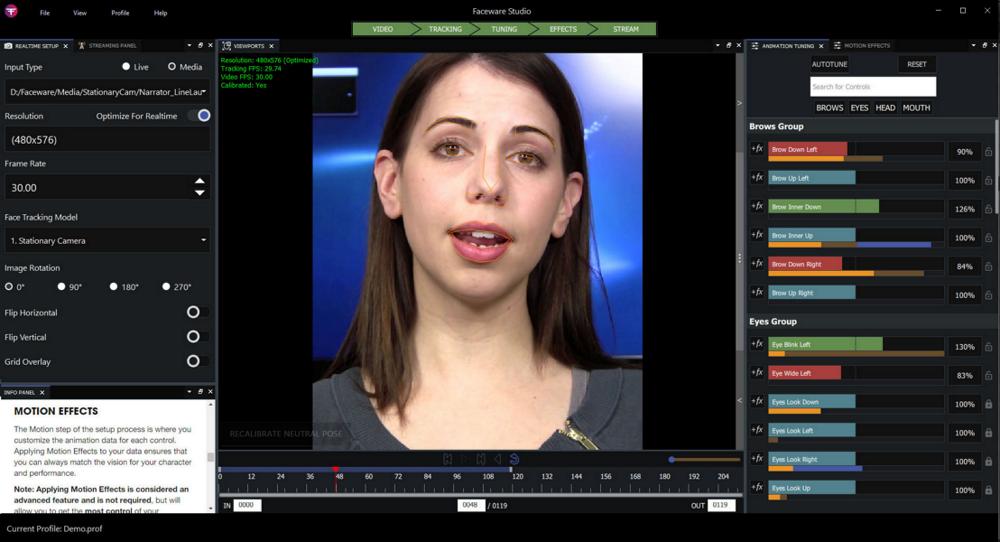 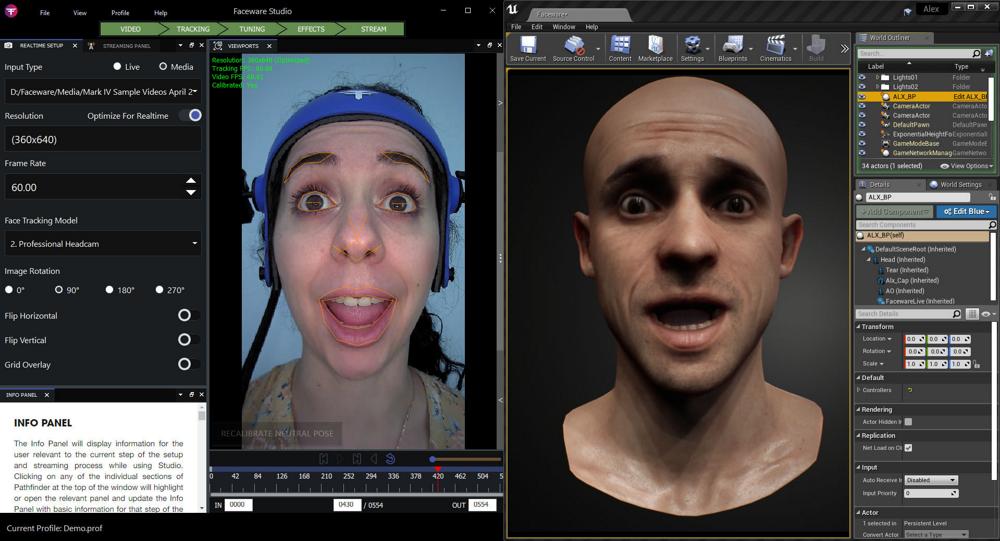 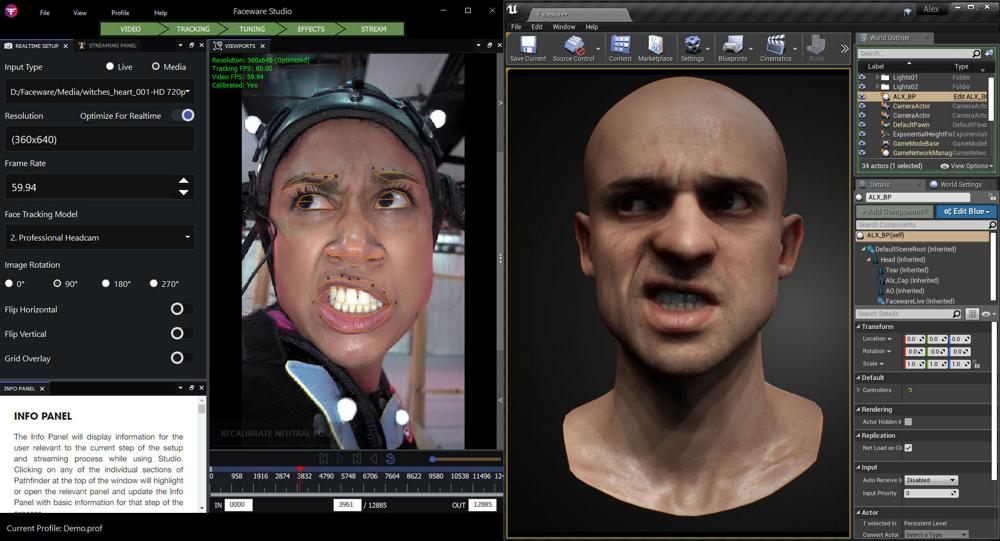 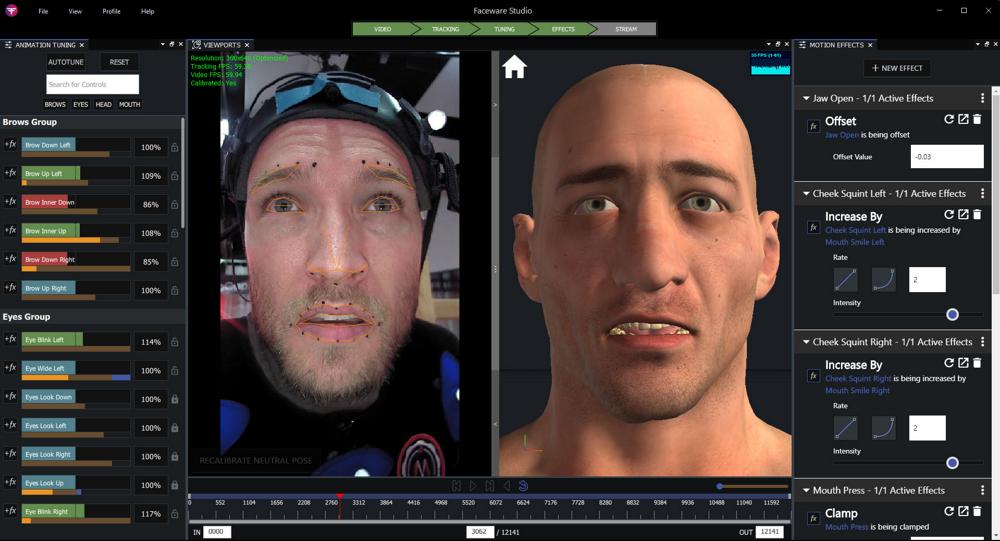