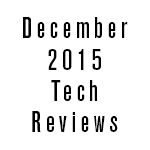 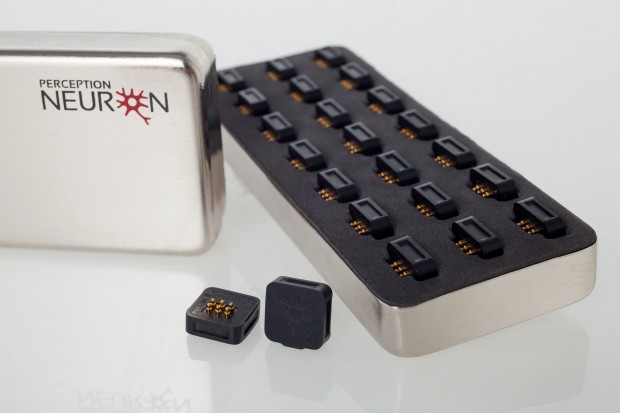 Motion capture has become ubiquitous in the industry — or rather industries if you talk about animation, film, previz and video games. It’s a must. But it’s frequently expensive. It has lots of equipment. It requires a dedicated, or at least temporarily dedicated, volume of space. It’s kind of a hassle, especially if you don’t have a support team to do it all.

Well, in the last few years, a number of companies have been working on getting around these foibles. The most noticed of these has been the Perception Neuron system, breaking out of the gate with a successful Kickstarter campaign that got them going down the development road. As of September, the systems were being shipped to contributors, and artists and animators throughout the land are starting to become performance artists and finding out just how hard it is to be a mime.

The system is compact and portable, lacing the performer up in a kind of a suspender and strap system with “neurons” at key points of rotation (body, head, arms, legs) and embedded into gloves for finger movement — a feature that isn’t possible with many optical mo-cap systems. The neurons calculate movement with accelerometers and gyros and translate that into data to be applied to a skeleton in 3D. This data is transmitted in real time back to your workstation either through Wi-Fi or a USB cable — and in the near future, a Micro SD card. Voila … you have a performance.

The setup is easy. We had it up and running in under an hour. All the software seemed to just work properly, although occasionally we would have to calibrate a couple of times before it locked in. Wi-Fi transmission seems to be incredibly sensitive to environmental influences and factors. Keep other devices off the system while capturing — or have a dedicated network — or else you run into drifting and performance lag. USB provides a cleaner signal, with the restriction that your performer is tethered. Hopefully the Micro SD will give you the best of both worlds.

Regardless of these nitpicky things, the concept of having a motion capture system in your living room to work out ideas on a whim is well worth a $1,500 investment. 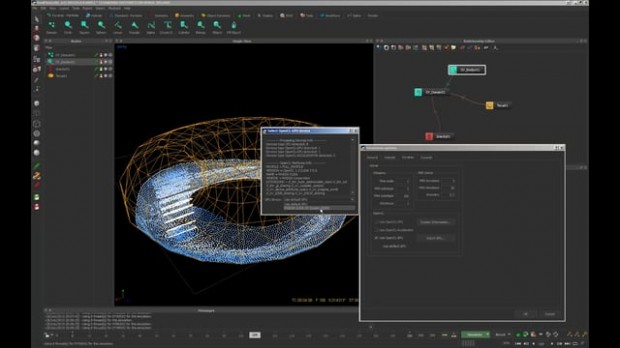 RealFlow 2015 is now available with some crazy new advances. Piggybacking onto the speed enhancements we saw with the Hybrido solver for large-scale simulations, NextLimit boosted its small and mid-size smoothed-particle hydrodynamics and created Dyverso, which uses either a souped-up SPH called DY-SPH, or another choice with DY-PBD with position-based dynamics. Both versions have resulted in simulations times that are fractions of the SPH solve times in 2014, and appear to be more stable. Each of the processes, including Hybrido, are more deeply integrated into the GPU, so the beefier your display card, the faster your simulations are going to run.

While we are still into algorithms with acronyms, RealFlow 2015 has also included DreamWorks’ OpenVDB into its workflow for increasing simulation precision in Hybrido and speeding up meshing processes.

All that under-the-hood stuff is all well and good and makes our magic happen faster, but what about the cool new stuff?

The UI has gotten an overhaul with better animation graphs and the addition of ramps and expressions into parameter sliders. But the best of all is the relationship editor, which is now more compact than it was before, and seems to be far more functional, feeling like an honest node-based system, like Houdini.

Additionally, spline tools have advanced beyond something neat but difficult to control into something more valuable and robust and a way to control not only emitting fluids from splines but controlling forces. Splines can be created internally, or they can be imported from SVG files. A text tool also has been incorporated to be used as splines — or you can create solid geometry for rigid body simulations

A tasty morsel has spiced up force daemons with control of the forces using tools such as spline curves in the new UI to drive complex falloffs for a high degree of custom control over the simulations. It’s a double-edged sword, in my humble opinion, as it not only will give the effects artists more control, but that means the director can be more finicky. But this is not a big enough problem to nullify the need for this tool.

And finally — finally! — there is a tool specifically designed to create the frequently sought after “crown splash” that every commercial needs to incorporate. With a collection of controllers, the artist can design the shape and timing of the splash, steering away from what is realistic into the realm of what is cool — shrouded in a thin veil of what is directable.

All good stuff, especially the fast simulations and the fancy-dancy and, most importantly, functional user interface. 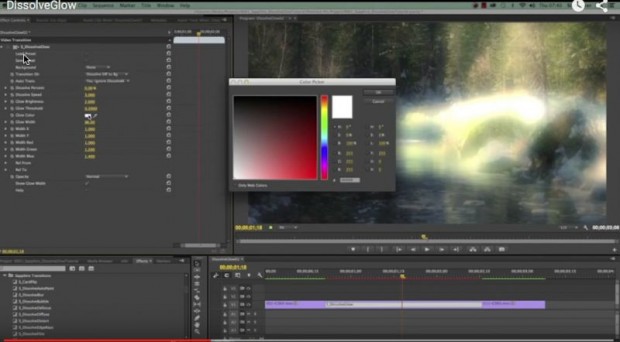 GenArts recently released the latest version of its Sapphire suite. They are now up to version 9 and continuing to add more effects as well as refine the ones that were already there.

In Sapphire 8, GenArts introduced the effect builder, which was a way to string effects together in a Nuke-like node-based system to create a brand-new custom effect. Effect builder has been enhanced with a more controllable workflow, with the primary addition of animation curves for the parameters, with curve presets allowing for quick prototyping of the new effects. Transition builder now allows you to nest transitions within transitions to create brand-new, more complex transitions. All these new effects can be saved to presets, plus you have access to a huge library of pre-built effects that can get you started in the right direction — and you can dive into the effect through builder to begin customizing.

Some fancy utilities have been included using Optical Flow technology to drive them. CutToDissolve creates additional frames on the head and tail of a cut where there simply may not be more footage. The extension of the footage allows you to have a dissolve where before you could only cut. The same technology is used in RepairFrame. By analyzing the before and after frames surrounding a bad frame, Sapphire builds a whole new frame to fill the hole. While the results vary depending on the complexity and movement of the shot, it is, by and large, an effective way to smooth over the problem.

A couple of brand new effects were introduced: Aurora, Nightsky, and BokehLights. Aurora and Nightsky work hand in hand to create auroras and night skies (duh!). But Aurora is even more powerful when you turn down the glow that gives it that signature look, and you realize they are made up of a ton of splines, which create a complex look somwhere between an oscilloscope and a Spirograph. Tweaking the parameters quickly get you to some cool, unique magic. Nightsky, on the other hand, recreates accurate starry skies based on latitude, longitude and the date. Neil DeGrasse Tyson will be happy.

Lastly, BokehLights creates that soft, Bokeh bloom that happens when lights are out of focus.

There’s some really cool stuff in version 9. If you have already gotten into effects and transition builder, then the upgrade will be worth it for the added control. And I think people are going to dig the Bokeh looks.

As with version 8, Sapphire is available on a subscription basis, so you can tailor your project and budgetary needs to match how much you need the plugin suite, rather than dropping a heavy bag of cash down on something you may only use once.