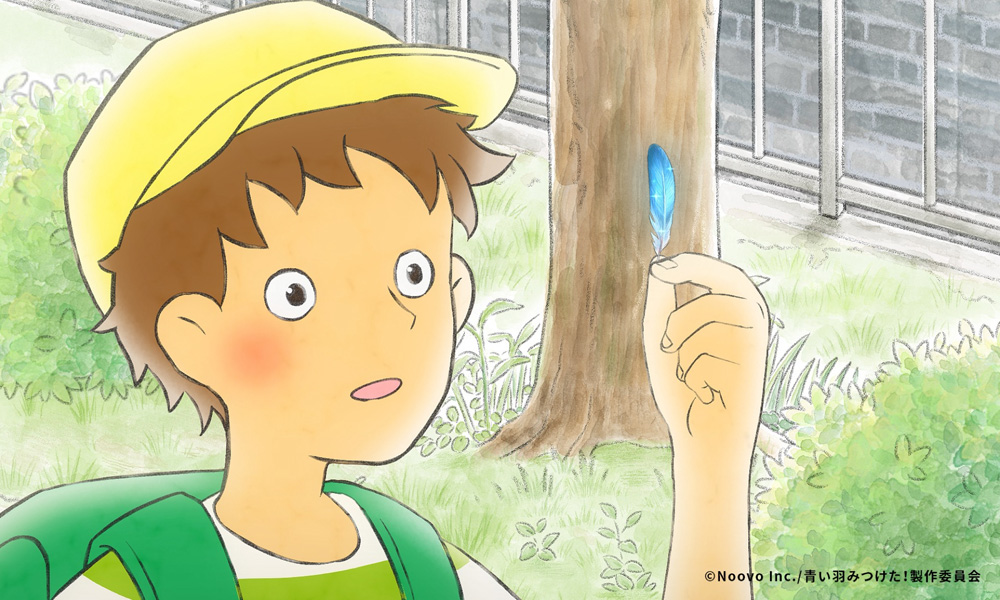 The cutting-edge production resulted in six five-minute episodes, available on various Japanese streaming services and globally on sites such as YouTube. The series was created digitally throughout the production process, while keeping the same watercolor painting look of the original book the series was based on.

“We already had a project to produce a picture book. Having IP of the book meant that we could be more aggressive if we made it into animation, so I had already planned to make an anime version. I wanted to try something new, which was to bring the picture book look using the latest technology,” said the book’s author and series executive producer Hideo Uda, CEO of Noovo.

Noovo specializes in full digital anime production. While the majority of the anime industry still use analog technology for production, hand drawing with paper, Noovo decided to take advantage of digital technology for a more efficient workflow. For this anime series, they used DaVinci Resolve and Unreal Engine, which allowed them to work efficiently with a small group of staff.

“We are in charge of system management and act as a liaison with manufacturers of products we had installed in the facility,” explained LITTLEBIT’s Nao Omachi. “In the edit suite, DaVinci Resolve Studio is installed as well as UltraStudio 4K Mini for monitor output. Sometimes, we bring an illustrator here to stream a live drawing program hosted by a tablet manufacturer, using ATEM Mini and Pocket Cinema Camera 4Ks.” 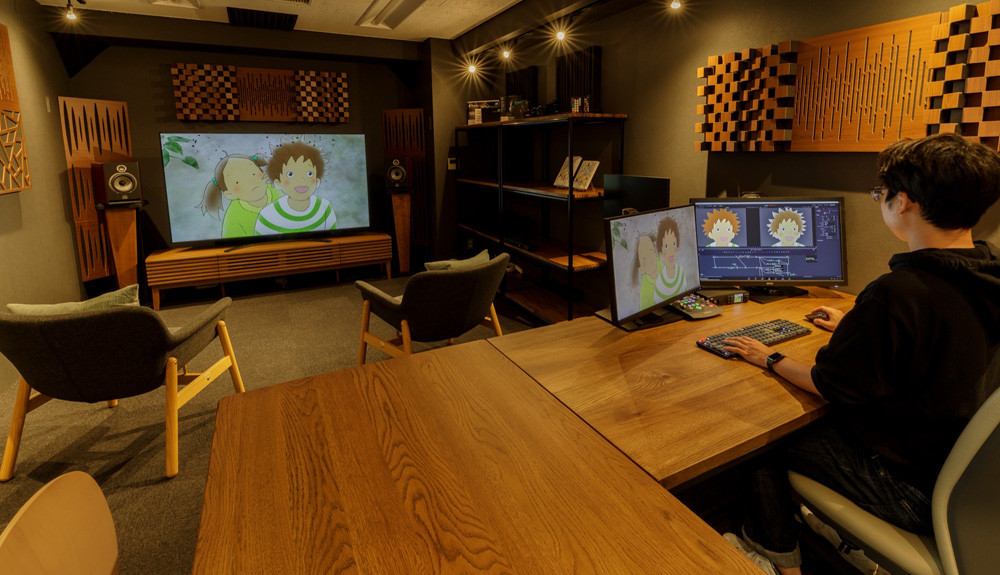 One of the important processes for a compositor in anime production is to animate drawings based on a time sheet, which guides the compositors’ decisions of when to use which frame. “I created a script to let Fusion read the time sheet. Importing the time sheet and converting it to keyframes using the Time Stretcher tool in Fusion to animate images, that was the first step we had using Fusion for the project,” Omachi said.

Masao Shimizu, the series’ compositor, added: “After that, I applied various effects to stylize characters more like the original picture book look. Then I composited the characters and backgrounds using Fusion, adding camera movement if needed.”

“The advantage of DaVinci Resolve is allowing me to see what I composite in Fusion page as an edited sequence in the Edit page, right away,” Shimizu continued. “Usually, compositing and editing are totally separated processes, so if I wanted to check how my composites look in a sequence, I have to ask an editor to export a movie file. Also, if working with other compositors, I have to ask them to send me their projects to check their works. On the other hand, DaVinci Resolve allows easy access to what other staff work on using Resolve’s collaboration workflow, so it is easier to balance out shots close to each other. 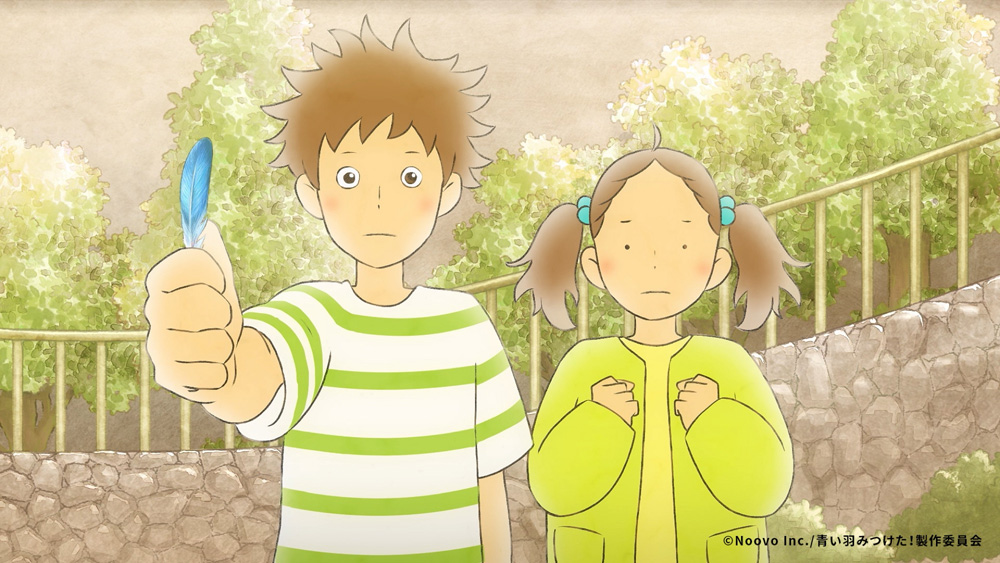 The DaVinci Resolve Studio collaboration workflow played an important role for this project, Omachi noted: “As Shimizu mainly worked from home, I set up a project server in the studio that was accessible via VPN. It was convenient that there was no need for him to bring a project or data when he comes to rush check or edit preview, as his DaVinci Resolve was always on collaboration mode with the one in the edit suite.

“At some point he was behind schedule, so I helped a bit with his composite work as I was the one who taught him the software. I also worked from home using the collaboration workflow. It was a smooth process to let Shimizu check my composite as we shared the same project. It was also handy to share effects by copying nodes on a memo pad as text data and then paste it into Fusion’s node editor, which is simple and easy. Collaboration workflows worked like a render farm as well. While I started up the machine in the studio in remote rendering mode, Shimizu remotely threw some shots to the studio machine for rendering. This way, he could work on other shots while rendering carried out in different machine.” 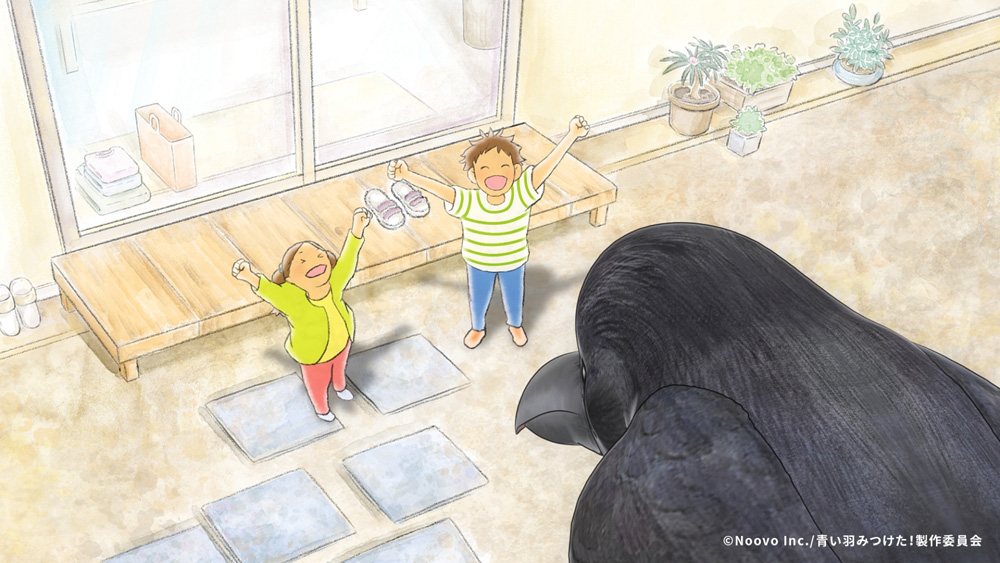 “The collaboration workflow allowed us to see what others did even though we worked remotely,” Shimizu added. “For example, I could see how much rendering had been done in another machine from my machine. Also, as the chief director could use DaVinci Resolve, he could check my composite remotely using the collaboration workflow. Usually, a compositor’s work is like a black box to a director and a producer. They cannot see what is going on the way I do. DaVinci Resolve is unique in that it even allowed the director to fine tune the composite directly in the same project.”

Takahiro Kawagoshi, chief director for Finding a Blue Feather, commented, “I have been using DaVinci Resolve from version 12.5, but it is not yet so common to use the software for anime production. It was great to use Resolve as it allowed us to share the project easily and the composites from Fusion were perfectly linked to the timeline in Edit page. I also recommend young anime creators try Resolve’s free version. It is also a great advantage for creators who make anime alone or with a small group of people, since compositing and editing can be done within the same software. I hope using such technology will create more and more anime professionals.”