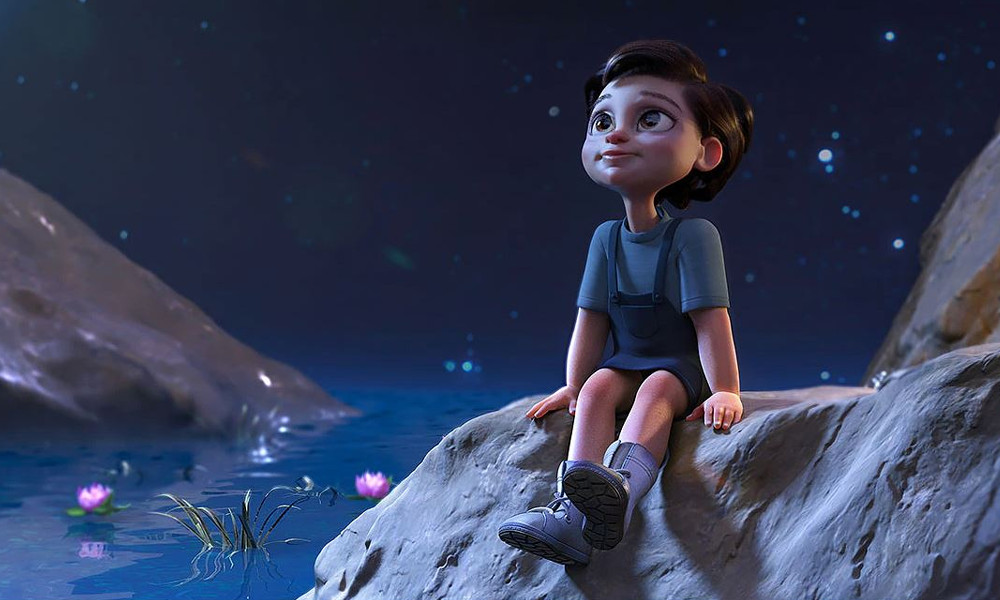 It’s been a while since I’ve typed out a review of Maya. This is mostly because Autodesk has been doing a slew of sub-point releases at various times without a “major” release. And it was only earlier this year that Autodesk released both Maya and 3ds Max in a 2022 flavor.

First thing’s first — and it’s a thing that the user base seems to be dialing into: Startup time. The 2022 startup time has been reduced to from a third to one half of the startup time in 2021. It may not sound like a big thing, but when you are rebooting or opening up multiple instances of Maya many times per day, a 90-second boot time can add up really quickly.

One of the huge talking points about Maya 2022 is the full integration of a USD (Universal Scene Description) workflow. In the past, it was released as a plug-in. Now, it’s fully integrated with a lot more feature workflows. You can import USD data into Maya as a full conversion to Maya data, but full benefits come when you are bringing in a USD as a stage, and the objects on that stage are referenced in. We are talking about differences of potentially tens of gigabytes of system resources.

Furthermore, when you manage your scenes with the USD layer editor, you are able to control the states of the stage, being able to quickly setup and save different layouts with similar objects with extremely low overhead and efficient translation to other artists — and other departments who use USD — Katana in the lighting and look dev department comes to mind. With USD becoming more and more the ubiquitous open source format of choice, it truly makes sense.

The rigging department got some fancy new tools in the form of Component Tags. These are collections of component selections (polys, edges, etc.) that you can name, organize and then manipulate. They are akin to selection sets, but more manageable, and can be called by modifiers to affect that area — without affecting skin weights upstream.

For animators, a critical tool is the ghosting editor, which behaves like onion skinning in 2D animation. This gives the animator a clear analysis of how the animation is behaving and adjustments can be made on the fly — as opposed to watching it play through and then adjusting.

These are the greatest hits, but there are plenty more new features to look into for whichever department you are in — motion capture, effects, lighting or rendering. 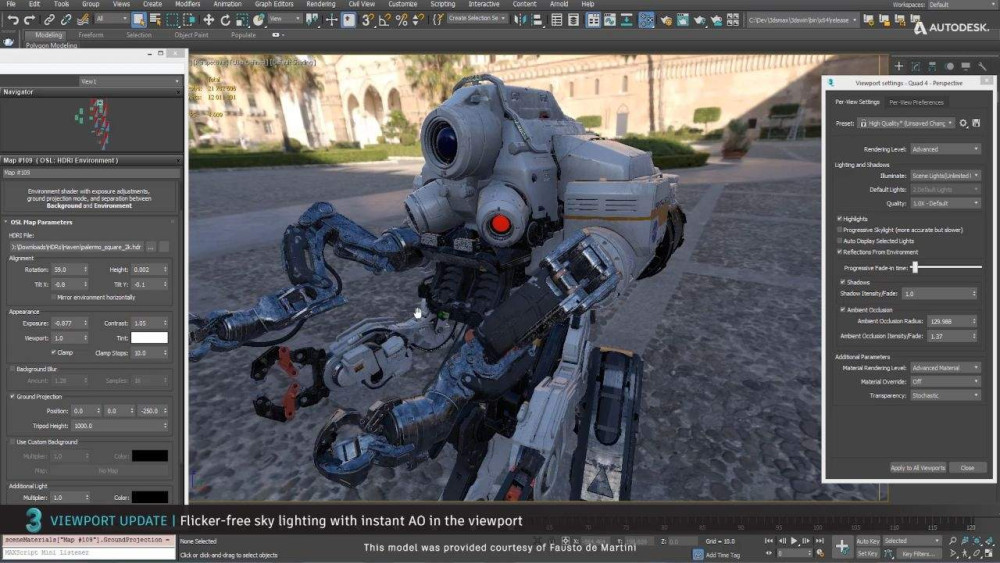 Along with the new Maya release comes 3ds Max 2022, which feels very much like a tip of the hat to all the modelers out there. Some really advanced features have been added to already existing tools, and one that seems like an entirely new tool altogether.

The Smart Extrude is something that I’ve been wanting and needing my entire career without knowing that I wanted and needed it. Now, when extruding faces on a poly object, if you extrude in the negative direction, it behaves like a Boolean. [A Boolean operation combines two or more solid shapes (say A and B) by checking if a point x lies inside of each solid.]

To clarify, if you grab a poly in the middle of an object and push it into the object until it goes out the other side, you end up with a hole. The inside polys have been created. The verts have been welded. Nothing more to do. And if you do it with a poly on the edge, the edge or corner will disappear. Or, if you extrude out and then extrude sideways adjacent to the surface, the verts will weld and you won’t have internal polys. If you understand all of that, you also realize how much of a timesaver this is.

Symmetry has been extended with some cool tools for creating symmetry not only on multiple axes, but you can also create symmetry radially — rather than across like a mirror. Or even use the pivot of an external object as the axis of symmetry. These controls are also available in the extended slice modifier.

The Relax modifier is also smarter in that it will attempt to retain the volume of the object as it relaxes the edges.

The new 3ds Max release now has the ability to make floating windows from your viewports. And so you can throw a window to an external monitor and set it to the new presentation mode which will remove any gizmos and just show the high-quality Gl render — or you can swap to Arnold and have it do progressive rendering for a client or director in near real time.

By the way, if you haven’t downloaded Retopology Tools as a free extra for Max 2022, you should. The Mesh Cleaner to Subdivide to Retopology workflow is kind of bananas.

As I mentioned, you get lots of useful stuff for the modelers. I am looking forward to seeing more additions for other departments in the future, as well. For those who, like me, want to see USD implementation in Max (like Maya), Autodesk does have a USD plugin for 3ds Max 2022 in beta as of this writing. 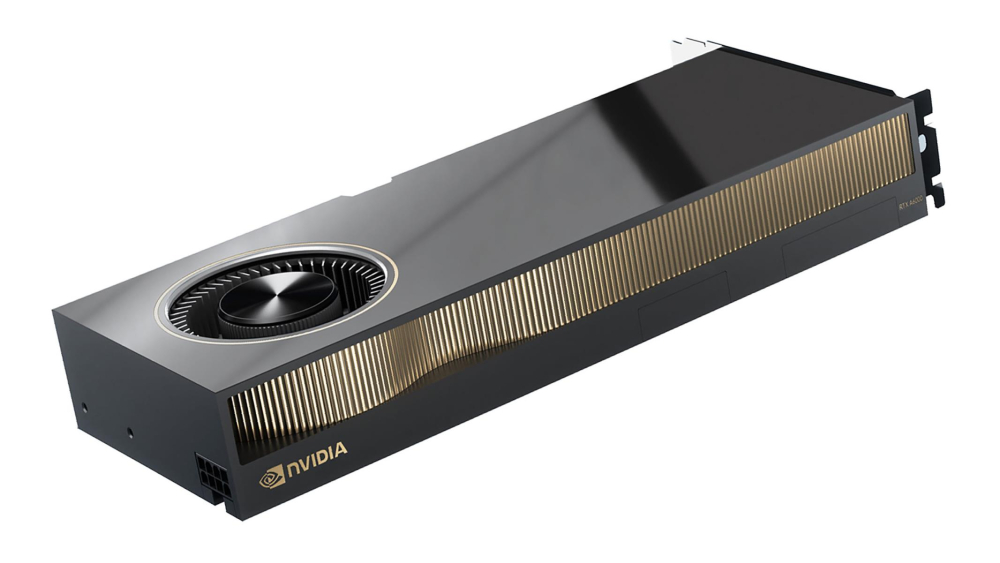 Nvidia has dropped the Quadro Pro moniker, but not the pro. The professional line of cards are now the RTX A series, and I’m looking at the RTX A6000 this month. The card came out earlier this year, but due to popularity compounded with raw material supplies issues and the boom in crypto mining, it took a little while to get my hands on one of these monsters.

The first thing to notice about the new card is the chassis design, with its fan arranged as a blower rather than the axial fan of, say, the RTX Titan. This blows heat out the back of the computer rather than into the case, which not only allows you to stack RTX A6000s next to each other (connected via NVLink), but it doesn’t throw the onus of cooling components to the system fans. The power input has been reduced to one CPU 8-pin connector — but not to worry, there is an adapter included for PCIe power.

Inside, you have the Nvidia Ampere architecture with second-generation RT cores. which doubles the performance. But, the eye-popping change is that you have 48GB of RAM on the card. As we’ve all learned, GPU acceleration is best when it can fit the scenes into RAM. The more RAM you have, the bigger the scenes you can handle.

In a use-case scenario, I took an older scene using V-Ray Next in 3ds Max which was rendering at 48 minutes per frame on the CPU and six minutes on a Titan with 24GB of RAM — and the A6000 chewed through frames in three minutes. Now, obviously, this is not a completely controlled test and, by all measures, anecdotal — but, those are pretty darn good numbers. I’m suspecting some of it has to do with faster motion blur and denoising.

Yes, this is a comparatively expensive card when you look at the market. But, in order to bring your system to the RAM capacity and speed of the A6000, you are talking about putting a number of cards together, and it doesn’t take too long to get to that price point. That’s if you can even fit them in your case (or buy an external chassis).

On a side note, the Nvidia Omniverse (which really deserves its own review — maybe soon) works well with the A6000, and it is able to use Pixar’s USD format to render scenes and act as an easy interchange between various 3D packages. 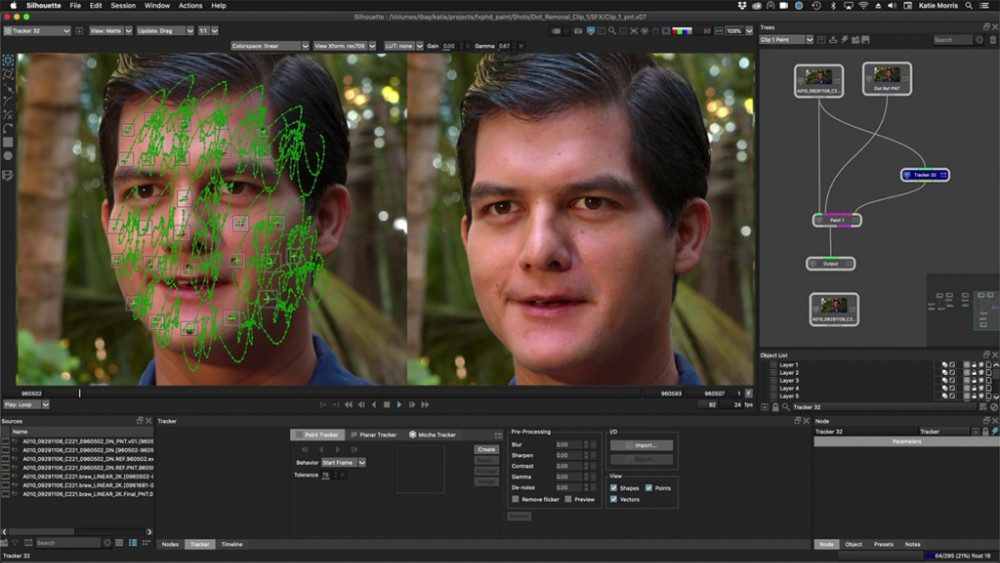 It wasn’t too long ago that I reviewed Silhouette when it was a standalone product that could be launched from within other host software like After Effects and Nuke. Silhouette 2021 builds on that earlier structure and adds in a number of new features and workflows as well.

Silhouette 2021 can now be launched as a plugin within the host, providing access to the Silhouette suite of roto and paint tools without going into the standalone version. This reduces resource overhead, but it also keeps things clean as you don’t have to bounce around between multiple interfaces. In larger studios, or multi-studio setups, the standalone files can be opened up within Nuke (for example). This means that a third-party roto and paint vendor could deliver the Silhouette files, rather than matte renders or spline exports, and if the work needs minor tweaks, the primary studio doesn’t have to send the work back for redos. There is even a free render plugin that can render the output of the Silhouette project if you don’t need access to the actual data.

The roto tools have had a number of key advances that make the workflow easier and more efficient. Points can be assigned to control groups, which can then be attached to hotkeys. So, instead of grabbing varying points as you animate the shapes, you can quickly switch between the control groups. Or groups can be collapsed to a point for easy manipulation, but then expanded when the edges become more complex and you need more points again. Similarly, when shapes have to make abrupt changes, you can split them in the timeline so that earlier keyframes don’t get unnecessarily complex on frames you’ve already worked on.

Additionally, weighted multi-frame editing has been made more controllable by the ability to add keyframes when doing multi-frame editing and feathering the influence with ease in/out curves. Also, a brush reshape tool gives you the ability to move roto points around using a brush, like you would use to paint. Adjusting the size and falloff of the brush refines how much influence you have on the points. All of the above roto tools are focused on reducing the clicks you have to make.

There are plenty more tools and UI enhancements — too long a list to get into here —  but 2021 is definitely worth an update.