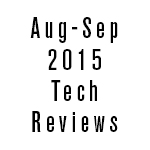 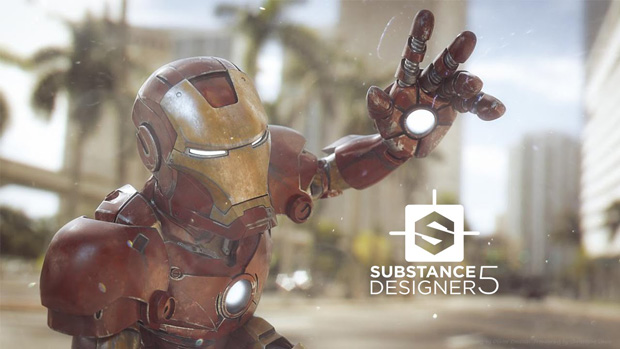 Substance Painter by Allegorithmic is a favorite tool in my current toolbox. It allows quick and effective texture development and prototyping with very little pain. But, I’ve found that it’s time to level up — with Substance Designer 5.

If you are familiar with Substance Painter, you know that there is a library of shaders that effectively build complex textures using maps on top of the UV channels in the models. Things like normals, ambient occlusion, curvature and such, drive how the dirt, grunge, scratches, etc., are calculated. Neat stuff. But these shaders are forged in the depths of Substance Designer.

As a precursor, I have to caveat that SD is not a piece of software to texture models — that’s Painter. Instead, it is a development tool to create looks and tools to make texturing faster. And not only in Painter. If you use the recent versions of Maya, Max, Modo, Unity and Unreal Engine, as well as Cinema4D through Substance Engine, you will notice that Substance is an option in your hypergraph/material editor. And it’s through here that you access the magic conjured up in Designer.

Substance Designer 5 has incorporated some extremely powerful tools that may explode your brain. The most significant and involved is the Pixel Processor, which is like a crazy mix between Houdini, Nuke and maybe Visual Studio. In very simple terms, it provides a way to create custom processes that act on a per-pixel basis. By hooking math functions together, new procedural tools can be made without diving into formal programming and using SDKs. Essentially, Allegorithmic is offering the user a way to customize their toolset to meet their own needs.

In the same vein, Substance Designer 5 has a Mask Builder. The masking toolset is deep enough already, but Mask Builder is a node that can take other driving parameters like curvature and normals, for example, along with other masks to build brand new masks.

As a way to solve texture seams often present with mapping through UV coordinates, a TriPlanar node creates and blends mapping on three different axes. It modifies the mapping on the model, and then remaps and reapplies the texture. This is great for Designer’s procedurally generated textures like noise, grime, rust, etc., where we have less control of where the textures will be placed. An invaluable tool, in my humble opinion.

Other, smaller, but no less important new features include: a vector warp to drive distortion using normal or flow maps, distance/edge detection nodes, a dependency manager to locate and re-hook maps and resources, a Bevel Node to smooth transitions on hard edges in textures — especially helpful for bump and normal maps, and to expand the already powerful Baking features, you can exclude objects by a subname, which prevents things like unwanted occlusion, and a Transfer Texture feature which will re-render a texture to appropriately fit a new UV map.

All these tools combine to create an extremely versatile and powerful tool.

Out of this, I suspect that a new breed of artist will emerge (if they haven’t already), known as Substance Designers. If the subscription-based Substance Database is any indication, the user base is vast — and growing.

There is a huge demand for digital environments in the visual effects world. I mean, from every budget, every format, every genre, there is a need to create new places for our heroes to journey. And those places could be fantastical, alien, futuristic or just simply needing to be in a location that was unavailable to shoot in. This demand is met in a number of different ways including homegrown internal tools, matte paintings and plugins.

Among the leaders in off-the-shelf tools has been E-On Software and their flagship, VUE. Now after 15 years, VUE has grown into a mature piece of software that has become a staple in the majority of visual effects houses around the world.

In VUE 2015, most of the updates lie under the hood in the programming. Pre-render scene preparations are faster in general, but specifically for the infinite terrains and ecosystems. The speed propagates its way into the preview rendering as well. This definitely helps for the photorealism that VUE is known for, but VUE 2015 introduces a library of non-photorealistic render presets to create line, chalk and other painterly effects.

As delightful as optimization is, I’m most excited about how VUE fits into the workflow with other software. For a while now, VUE xStream creates a conduit between 3ds Max, Maya, Softimage, Cinema4D and Lightwave, pushing the scenes from VUE into the other platform to be rendered in a hybrid fashion between VUE’s renderer and the native renderer. But E-On has been keeping up with the times. One can export information as Alembic files, or over to ZBrush for sculpting through GoZ, or Disney’s PTEX format for texturing objects. And import has been expanded to bring in more formats for geographical data (DTED, SDTS/DDF, GeoTIFF) so you can bring in actual physical locations. On the compositing side, VUE supports multipass rendering in the EXR 2.0 format, and E-On has even created a Nuke script to break out the passes for you for tweaking the composite post render.

Finally, E-On has joined the masses of companies going with a subscription model. After your initial purchase, you can opt to subscribe, which will maintain your version and cover your upgrades. Along with this, you can pick your flavor of VUE depending on your needs ranging from the full xStream version to the Esprit version for those just getting the hang of it. 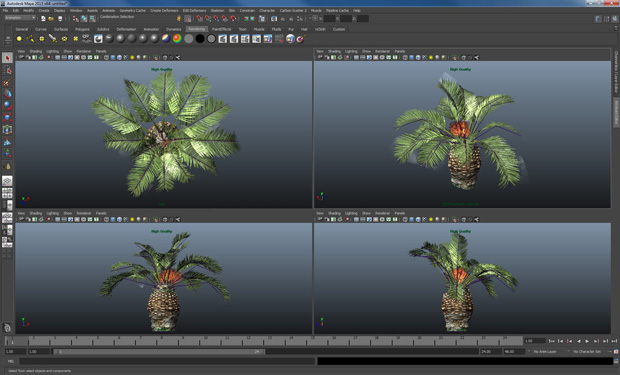 As a compliment to VUE, E-ON has Plant Factory, which, like VUE, comes in a variety of flavors to meet your production needs. Plant Factory Producer is the top of the line and includes more advanced functionality to help with pipeline integration, plant animation, and rendering. However, most of the base functionality is the same between versions — and that is to create plants and foliage.

Plant Factory takes a number of approaches to creating plants. First is manually painting it from scratch. Quite literally, you take your stylus and draw out curves that become trunks, branches, and leaves. Once built, you can dive into the construction graph and start tweaking nodes to refine the plant.

You can also build plants from components of already built plants. Plant Factory already comes with a slew of plant options, but additional ones are available for purchase at the online Plant Factory Nursery. Each of the subcomponents of a plant (branches, leaves, etc.) can be accessed and Frankensteined into a brand-new plant type, or at the very least a variant.

Finally, if one wants to get hardcore, one can built procedural plants. Through a system of Houdini-like nodes, you can assemble a new tree (or dive into one you’ve made). The advanced graph lets you link up parameters to parameters so that modified nodes propagate through the entire structure of the tree. Things like height, for example, could be fed into leaf color or size, so that the taller the tree, the more purple the leaves would become — if you wanted purple leaves.

Once you have what you want, the plant can be exported to any number of formats with all the good stuff like subdivision supported quads and pushing mapping to a second UV layer for isolated or detailed mapping. So, models could be built and then imported as geo — or bring it directly into VUE. Animation in Plant Factory Producer is also exportable in Alembic or FBX.

Between the ability to create new species and buy new one from the nursery, the foliage world is your oyster.