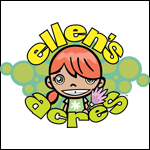 A graphic designer has filed a lawsuit alleging New York-based studio Animation Collective has failed to pay her royalties owed her under contract for designing what became the lead character of the animated TV series Ellen’s Acres, according to a report in The Wall Street Journal.

Denato told the newspaper that under a royalty agreement with Animation Collective that she signed in 2002, she is owed 25 percent of all revenues generated by her artwork, including book sales, merchandising, movies and TV shows. She was paid a $9,000 advance in 2006 for her illustration of the title character of Ellen, who was created for a book.

The book became the basis for the Ellen’s Acres TV series, of which 52 11-minute episodes were produced by Animation Collective and aired starting in 2006 on Cartoon Network. An iPad app based on the series was released earlier this year.

Denato says she has not been paid any additional money since the advance, the Journal states. She also says company executives tried to get her to renegotiate the agreement at a lower rate and have not disclosed any sales figures that would allow her to estimate how much she is owed, the Journal states.

Denato told the Journal that Animation Collective has not disclosed any sales figures, making it difficult for her to estimate how much she is owed.

The defendants in the case all declined comment to the Journal.