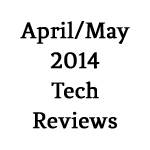 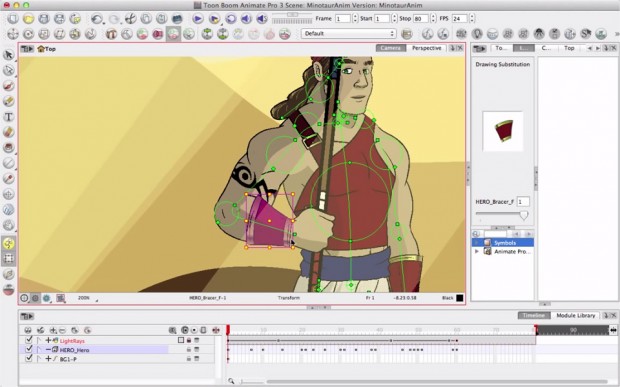 ToonBoom has definitely carved a niche for itself in the animation world, from the production-level Harmony products down to the tools for the individual artist. They love to share technology across platforms and promote the artistry within each user. The latest iteration of its midtier product, Animate Pro 3.0, brings with it an advanced toolset with a balanced focus on drawing, look management and complex animation tools — and all in 64-bit.

A new pencil set adds to a strong brush system, with stroke controllability that allows lines to be laid down and manipulated later, including Bezier controls, thickness, color and texture. The pencil stroke works integrally with paint and fill functions so that fills will reach to the core stroke rather than pixel boundaries. This gives users the freedom to experiment with stroke styles, even after painting has been completed. Furthermore, these changes will propagate to all the frames in the animation. And the setting can be saved as presets to be applied across a whole project or sequence.

The color palettes can be manipulated after the fact, and have those changes be universal. But even more impressive is that colors can be globally tinted and saved as a new palette. That palette can then be applied to other shots, or reverted. The color scheme for a character then holds continuity across sequences and looks — the difference between a day scene and a night scene, for example.

If these features sound mundane, then just try to get through even a short film trying to keep track of looks and keeping them on model.

On the shot-assembly side of the toolset, Animate Pro has implemented a node-based compositor, as in Nuke or Fusion. This offers amazing possibilities for complex layering of animation which, if setup correctly, just works. For example, having animation happening within other animation, masked out by foreground and background animation. All happening within the network of nodes.

Animate Pro has borrowed technology from the 3-D animation world by implementing a sophisticated deforming system driven by a hierarchical bone system. Along with normal shape deformation, textures and the vector-based lines from the pencil system are also affected. IK and FK systems can be easily swapped so that you can animate with free-flowing appendages, or you can lock the feet or hands into place.

And these are just the highlights. Definitely, for anyone wanting to do 2-D animation, you can feel confident that through the experience of ToonBoom, you’ll have a rock-solid toolset powerful enough to get things done without getting bogged down in the tech. 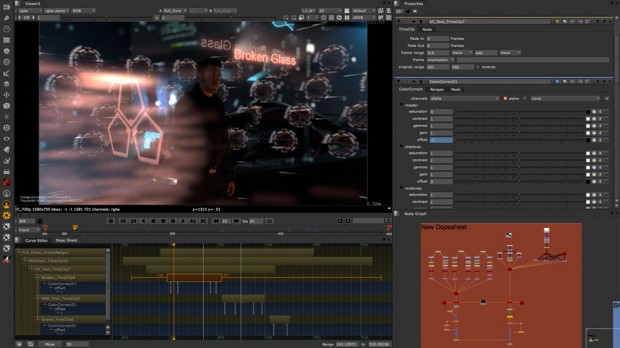 The trouble with really productive software companies is that I don’t have enough space to write about all the advances in each of their releases. The Foundry definitely falls into this category. So, here is the hit parade of features for the recently released Nuke 8 … and really there is something for everyone!

For the motion designers, Nuke 8 implements text tools, allowing for text animation and editing directly in the interface. While in this first iteration it’s not going to be as robust as After Effects or Cinema4D, this is a huge step from where it was, which was … practically nonexistent. So keep an eye out — Nuke may be horning in on your turf.

Color-focused guys get a whole slew of both artistic and technical color specific tools. The color sliders, which in earlier versions were just that — sliders — are now accompanied by color wheels for more refined control between hue, value and saturation. Hue is an outside dial for control, separate from the saturation, isolating the two parameters and — for me — a much easier way to envision how I’m affecting the color. The pixal analyzer allows you to quickly select and store different pixel values or averages of values, which is great for complex color correction. And then the scopes — Waveform, Vector and Histograms — give those technical guys the feedback they need for not only aiding in match clips, but also in sticking within thresholds like for broadcast. (Tip: Learn how to read scopes, people).

And for the trackers, matte painters and 3-D savvy types, an Edit Geo node has been created. You no longer have to keep swapping back and forth to your favorite 3-D software to tweak the models receiving your projections. If a corner is off, just dig in there and adjust your verts. It even supports Alembic files. Not only that, but a wireframe display helps out with validating tracks.

There are even some gifts for the technical directors. For Pythoners, there is now an “include Nuke” option, which means that all scriptable Nuke functions are accessible from any interpreter. For the C++ guys, a new Planar Framework allows you to output planar data. And, The Foundry developed a thing they call Blink, which lets dev guys throw image processing operations to either the CPU or the GPU without having to write different sets of code.

Lots of really great advances that make upgrading to (or buying) Nuke 8 worth the expense (and yes, I know its expensive). 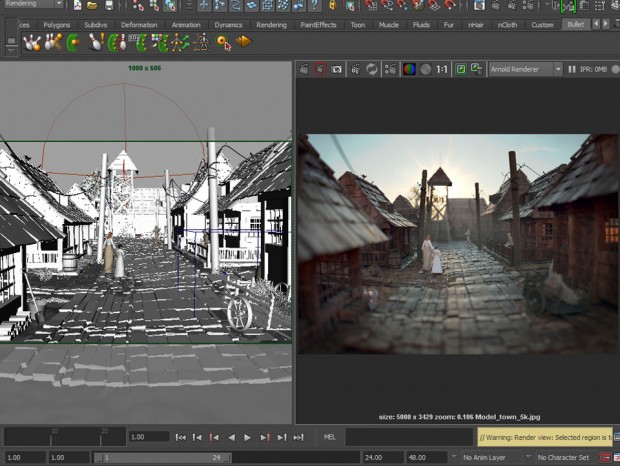 I have been waiting years to write this review — literally years! — I only wish I had more space to cover it.

The first Arnold use blew us VFX folks away back in 1999 with a short by Daniel Martinez Lara called Pepe. Shortly after, it was used to great effect for the Oscar nominated short, Fifty Percent Grey (no relation to Fifty Shades of Grey). In 2004, Sony Pictures Imageworks went into a deal with Arnold creator Marcus Fajardo to develop the product in-house and has been used to fabulous effect for nearly every SPI production since Monster House. For the next decade, Arnold has been licensed to a limited (albeit not insubstantial) number of companies, the reason being that the Solid Angle development team would be better able to maintain the demands of a few studios, rather than a gagillion users.

Now, with nearly all of the VFX nominated films using Arnold, including the winner, Gravity, Solid Angle is taking that step into a brand new world.

Arnold is a brute force, physically-based, Monte Carlo ray trace renderer, which is a lot of fancy words which say that it renders physically accurate imagery using a big hammer to calculate rather than sacrificing the fidelity of the imagery with short cuts. And frankly, with the computing power at our disposal, the short cuts of the past don’t ‘really’ need to be used anymore. Arnold chews up tens, in not hundreds, of millions of polys and spits out amazing imagery – just ask WhiskyTree about their Elysium model, or Industrial Light and Magic for the robots in Pacific Rim.

Arnold is a stand-alone renderer, but plugins for Maya, Houdini, and Softimage (well, not for much longer) get the 3D data over to Arnold for rendering. It’s easy to set up, and easy to use. Most of the tweaking comes in the form of a couple sliders to determine sampling as you work to get noise out of the image. And really, that’s the big tussle – the noise.

The price for a seat is comparable to, say, Vray, but without the benefit of extra render nodes. However, you have the option of renting seats at $8.50/day if you need to boost your rendering capacity for short bursts. You can start with a free trial download and get yourself rendering. 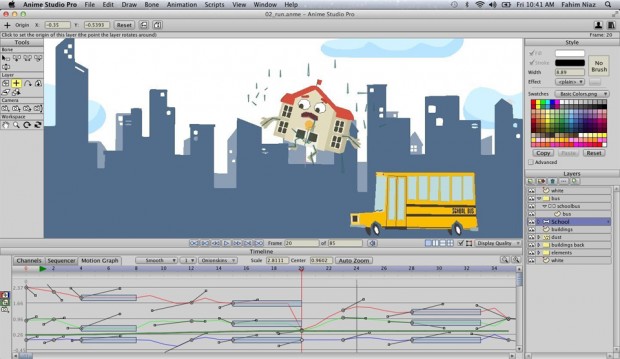 SmithMicro has been consistently and methodically adding functionality to the Anime Studio Pro toolset to help artists get their ideas from concept to screen more efficiently and quickly, making sure that each advance is practical and not superfluous.

Foremost, the bones system is easier to setup and has additional refinements such as squash and stretch features, bending smoothing for pinching joint problems, and target bones for advanced IK locking for things like keeping feet in place. The bones can also be used as controllers to drive other animations for lipsync, blinking, etc – kinda of like set driven keys in Maya. It seems like they are keeping an eye on the 3D guys for inspiration on how to make the 2D folks that much more efficient.

Interpolation tools add automated secondary motion for bouncing, staggering, and elastically springing back and forth – kind of like bouncing, but without a surface to bounce against. Each of these gives a simple way to add complexity to the animation – especially when used subtly.

Drawing tools have also been enhanced or added. A new blob tool works as almost a rough Boolean tool, where you can quickly layout shapes and volumes, which Anime Studio Pro will outline and vectorfy for you. But then you can add or erase area to the shape and it will recalculate the new shape with new curves. Pretty cool. And, with the point reduction tool, you can go into that newly created shape and remove points based on a threshold, making the shape or stroke easier to manipulate, and computationally lighter.

These are the big, noticeable advances, but there are plenty of other gems hidden inside; mostly having to do with workflow. A Preview Animation can now be generated for quick reviews before committing to a render, and then, the animations can be rendered as a batch process outside of Anime Studio Pro, removing the overhead of the UI and such, and leaving the CPUs to focus on the task – or the GPUs for that matter since many of the functions are now accelerated on the graphic card.

Lots and lots of handy stuff. And for the price point, you really have no reason you shouldn’t be animating already.

Todd Sheridan Perry is a visual-effects supervisor and digital artist who has contributed to such features as The Lord of the Rings: The Two Towers, Speed Racer, 2012 and Final Destination 5. He can be reached via email at todd@teaspoonvfx.com.