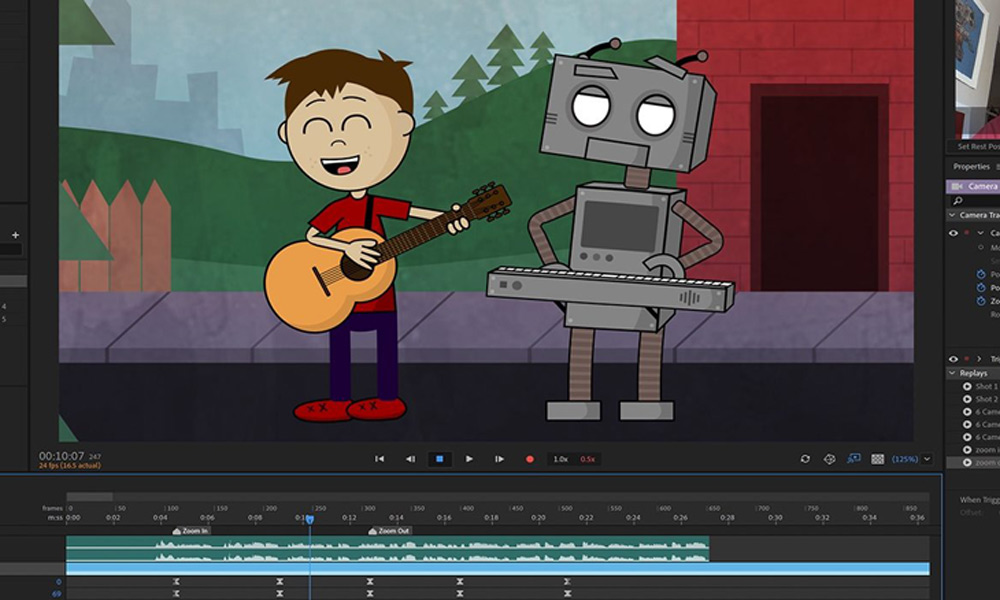 Highlights across these tools include the highly anticipated Auto Reframe feature in Premiere Pro, which uses Adobe Sensei to intelligently optimize videos for vertical, horizontal, and 16:9 formats; the introduction of Character Animator 3.0 with improved scene cameras that add new dynamics to animations; and new efficiency and performance improvements for After Effects, Audition and Premiere Pro. And, for the first time, Premiere Rush users can now share their videos directly to TikTok from the Premiere Rush app — making it the first app to offer direct sharing to this leading destination for short-form mobile video.

The 3.0 release of Character Animator rounds out the feature set, providing a comprehensive workflow for animation studios and content creators who wants to explore the art and expand their storytelling:

After Effects has been tuned up with high-performance updates and speed improvements across the board. Notably, combining CPU threading improvements and new GPU architecture for fluid playback of cached previews, so users can interact with the app while previewing in real time — facilitating the creative decision-making experience.

Some of AEs most-used features have also been sped up: Multichannel EXR files are up to 10-12 times faster, and are importable as layered compositions; Shape layers are snappier, shape grouping and ungrouping is quicker and easier with a new context menu; expressions that don’t change will now only be calculated once, and expression access has been added to text style properties; and Content-Aware Fill is now twice as fast and uses half as much memory.

The new release of AE also includes an update to Maxon Cinema 4D Lite (based on Cinema 4D Release 21) motion graphics tool, which can create and import 3D content for AE projects — add C4D content like footage; extract scene data like cameras or 3D objects. The latest release of C4D Lite can be launched within After Effects and as a standalone application. New features include the caps and bevel tools for creating extruded text and splines with more personality. A new high-performance denoising filter improves visual quality and reduces rendering times.