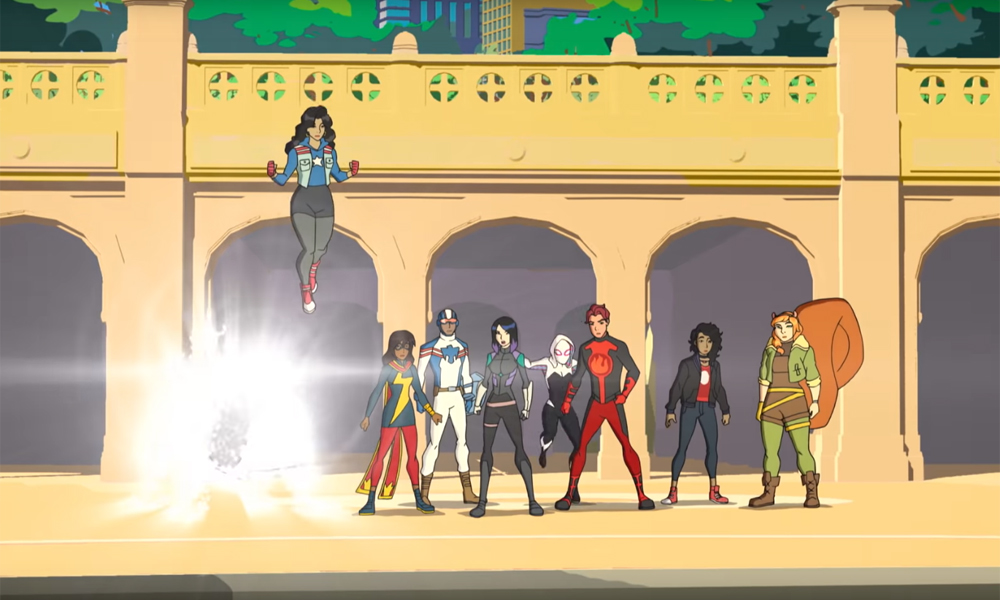 At Anaheim’s WonderCon on Sunday, Marvel’s animation contingent premiered Marvel Rising: Heart of Iron and announced three upcoming specials in the franchise will be streaming for fans on Marvel HQ later this year. The newly revealed adventures are Battle of the Bands, Operation Shuri and Playing with Fire.

Marvel Rising: Battle of the Bands stars Dove Cameron (Descendants 3) as Ghost-Spider in a 22-minute animated special. On the day of Gwen’s “Battle of the Bands” competition, mysterious attacks force her and the Secret Warriors to investigate. Can they save the city and get Gwen to the concert on time?

Marvel Rising: Operation Shuri will introduce the fan-favorite character Shuri, voiced by Daisy Lightfoot (Marvel Avengers: Black Panther’s Quest) to the Marvel Rising universe in a 22-minute animated special. The lives of the Secret Warriors are turned upside down when faced with their latest mission: hang out with Shuri, the Crown Princess of Wakanda, and show her what it’s like to be an ordinary teenager. But nothing’s ordinary when you’re dealing with one of the smartest and most famous people on the planet.

Marvel Rising: Playing With Fire will star Tyler Posey (Teen Wolf) as Inferno. In this 44-minute special, Inferno’s powers are stolen by a young and powerful villain and it’s up to the Secret Warriors to defeat their new foe and help their friend. But does Inferno even WANT his powers back? Meanwhile, America Chavez, voiced by Cierra Ramirez (Good Trouble), learns a lesson about friendship and family from teammate Ms. Marvel.

Berkowitz Promoted to CCO of Thunderbird and Atomic Cartoons
WonderCon: ‘The Dragon Prince’ Renewed for Season 3