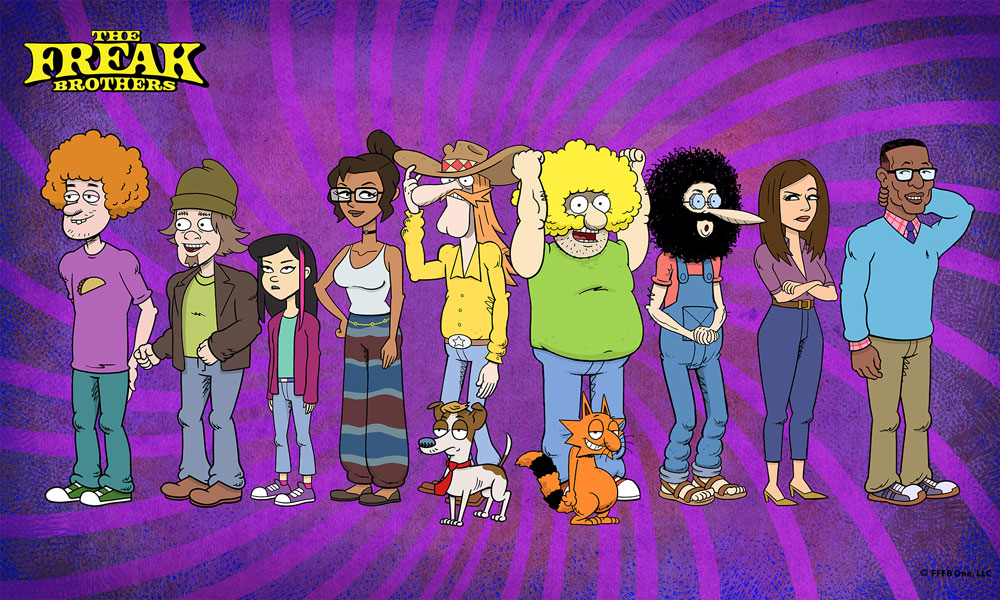 Tubi, the AVOD division of FOX Entertainment, is hoping the grass is greener on the adult animation side of the fence, anchoring its expansion into this space with its first-ever original animated series, The Freak Brothers. Based on the cult classic underground comix, the star-studded toon debuts with two episodes on Sunday, November 14.

“We can’t wait for Tubi viewers to freak out to The Freak Brothers, with its unforgettably irreverent comedy infused with heart, alongside an iconic ensemble voice cast and a stellar team of elite producers and writers,” said Adam Lewinson, Chief Content Officer, Tubi. “This comedy is 50 years in the making and we are thrilled to have it debut on Tubi as our first original animated comedy, marking a new step for Tubi as we expand our adult humor offerings.”

The eight-episode series chronicles the escapades of a trio of stoner anti-establishment characters and their cat who wake up from a 50-year nap after smoking a magical strain of weed in 1969, and must adjust to life with a new family in present-day San Francisco. Season 1 episodes will drop weekly on Sundays through to the finale on Sunday, December 26.

The series also stars Adam Devine and Blake Anderson, who serve as executive producers, as well as Andrea Savage, La La Anthony and Rapper ScHoolboy Q. Devine and Anderson voice Chuck and Charlie, a couple of weed savants always looking for the next side hustle, with hearts of gold hidden beneath their unwashed exteriors. Savage voices Harper, a no-nonsense techie who undoubtedly wears the pants in her household. Anthony voices Gretchen, a social-advocate lawyer who is the more idealistic and compassionate younger sister of Harper. ScHoolboy Q voices an animated version of himself who finds himself surrounded by “The Freaks.”

On Sunday, Nov. 14, TV viewers will get a sneak peek at The Freak Brothers during a special 90-second trailer airing during FOX’s “Animation Domination” block during Family Guy (9:30-10:00 p.m. ET/PT).

“As we continue our expansion into original animation, a cornerstone of the FOX brand, we’re thrilled Tubi is joining the party with its first original animated series,” said Michael Thorn, President of Entertainment, FOX Entertainment. “With its counterculture roots, anti-establishment comedic POV and, as Adam said, an all-star team of cast and producers, The Freak Brothers is the perfect complement to Animation Domination and provides the ideal opportunity to not only grow Tubi’s audience, but take the animation genre to the next level in AVOD. Stay tuned for more original Tubi animated content soon.”

The Freak Brothers is based on Gilbert Shelton’s The Fabulous Furry Freak Brothers. Critiquing the Establishment, while satirizing counterculture at the same time, the comic sold more than 45 million copies in 16 languages and was hailed by The Comics Journal as “One of the 100 Greatest Comics of the Century.” Starburns Industries and Pure Imagination Studios, the studios behind Rick and Morty and The Simpsons: Brick Like Me, handled the animation. The series is produced by WTG Enterprises and distributed by Lionsgate.

“We’re pleased to partner with FOX and Tubi on a new paradigm for distributing original animation to our consumers,” said Lionsgate President of Worldwide Television Distribution Jim Packer. “The timeless humor of ‘The Freak Brothers’ has resonated with audiences for years, and this edgy comedy gives it a fresh and inventive spin for a whole new generation of fans.”

The theme song was created and performed by TDE recording artist Ray Vaughn. Anthony “Top Dawg” Tiffith, the Grammy Award-winning producer and founder of TDE, one of the most notable music labels, produced the music for The Freak Brothers and is an executive producer on the series, along with Mike Concepcion.