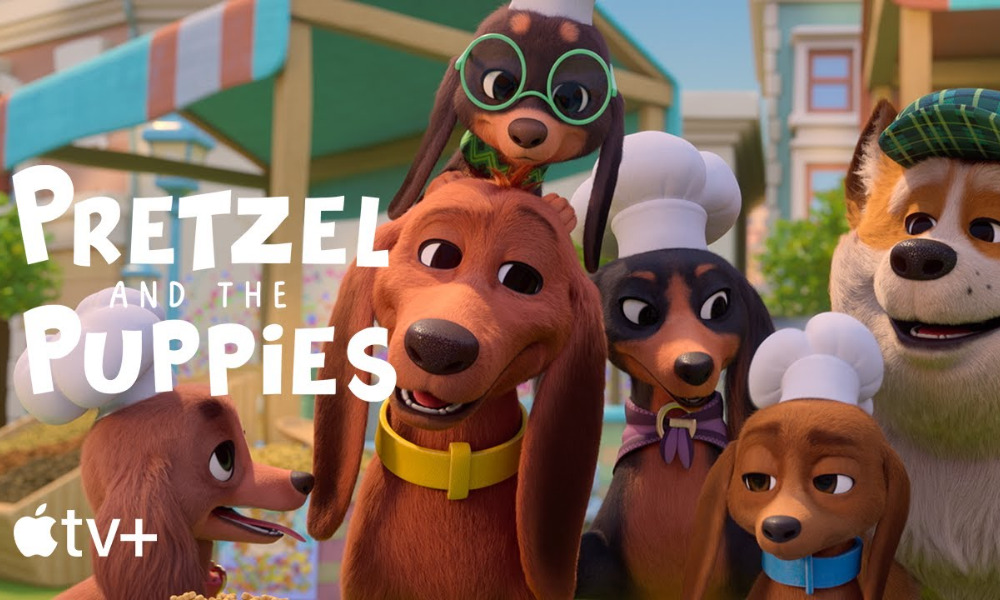 Pretzel and the Puppies

Apple TV+ today announced a new animated preschool series, Pretzel and the Puppies, premiering Friday, February 11. Based on the beloved canine from the classic book Pretzel by award-winning authors Margret and H.A. Rey, creators of Curious George, the original series is a new story about the modern dog family led by stay-at-home dad Pretzel, his five adorable Dachshund puppies, and mom Greta, the mayor of Muttgomery.

When your dad is the ‘world’s longest dachshund,’ it puts a whole new twist on growing up! The eight episodes follow Pretzel (Duplass), Greta (Pedrad) and the puppies, in their hometown of Muttgomery. They are a modern and unique family who are always sniffing out ways to ‘Make Their Bark,’ and make the world a better place for their four-legged friends and neighbors. Pretzel and Greta encourage their pups to try to solve their own problems, often reminding them to “Get those PAWS UP!” when they face a challenge.

Pretzel and the Puppies joins Apple TV+’s animation lineup for kids & families, which includes the recently premiered, critically-acclaimed El Deafo; Harriet the Spy from The Jim Henson Company; Wolfboy and the Everything Factory from Joseph Gordon-Levitt, HITRECORD and Bento Box Entertainment; Get Rolling with Otis and Puppy Place; Academy Award-nominated film Wolfwalkers; Peabody Award-winning series Stillwater; new series and specials from Peanuts and WildBrain including Snoopy in Space season two and Snoopy Presents: For Auld Lang Syne; and Here We Are: Notes for Living on Planet Earth, the Daytime Emmy Award-winning television event based on the New York Times best-selling book and TIME Best Book of the Year by Oliver Jeffers.