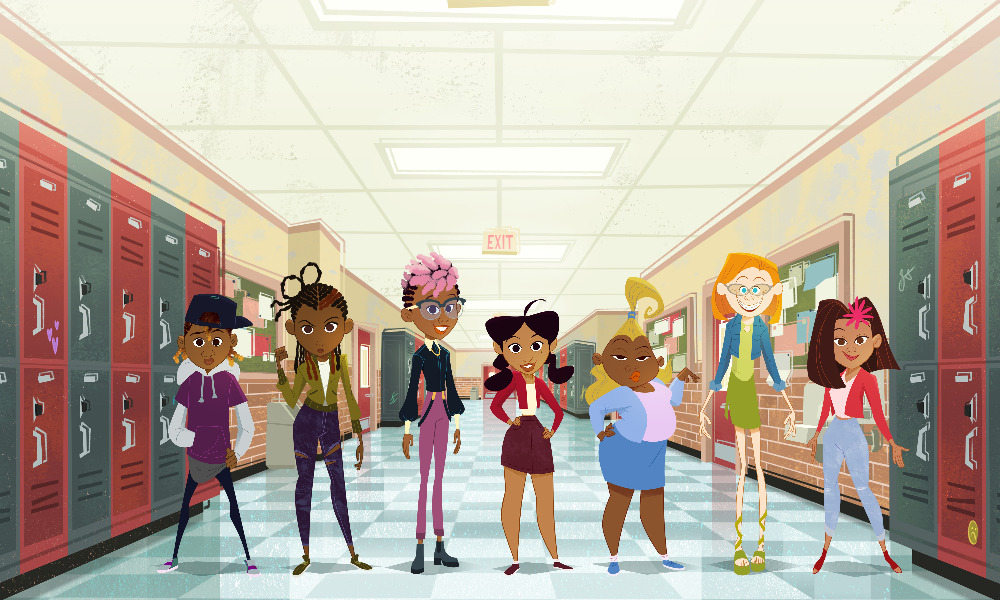 Penny Proud is growing up. The Proud Family’s plucky 14-year-old star, voiced by Kyla Pratt, faces a host of new challenges in the upcoming series revival, The Proud Family: Louder and Prouder, including a “woke” neighbor who thinks Penny could use some schooling, bullying social media influencers intent on canceling her and — so cringe! — her own teenage hormones. 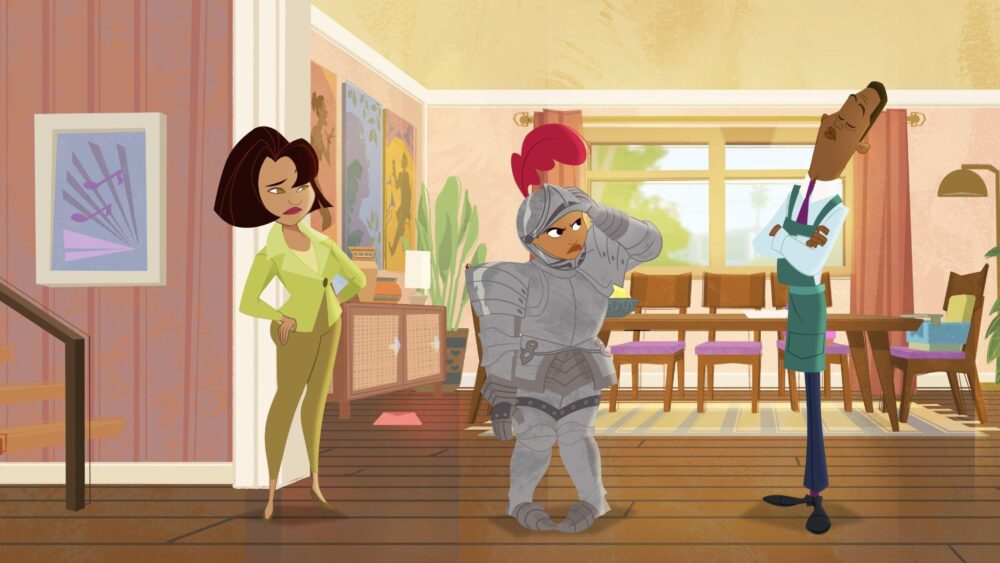 A continuation of the acclaimed Disney Channel series that served as a cultural touchstone for Black audiences during its two-season run, The Proud Family: Louder and Prouder arrives on Disney+ on February 23. The new series, first announced in 2020, is executive produced by Proud Family creator Bruce W. Smith (The Princess and the Frog) and television veteran Ralph Farquhar (Moesha), with Calvin Brown, Jr. (Moesha) serving as co-executive producer and story editor.

For Smith, The Proud Family represented everything that was missing in mainstream animation, namely Black representation, during a time when shows like The Simpsons, Family Guy and King of the Hill were dominating primetime television. “Where the Black people at?” he demands. “That’s kind of what it came down to, and the inspiration for creating the show was that point of, ‘When will we be included in all the fun?’ I grew up loving shows like The Flintstones and The Jetsons. For me, as an African American growing up in South Central Los Angeles, I knew that the one element missing in all of my favorite animated shows was us.” 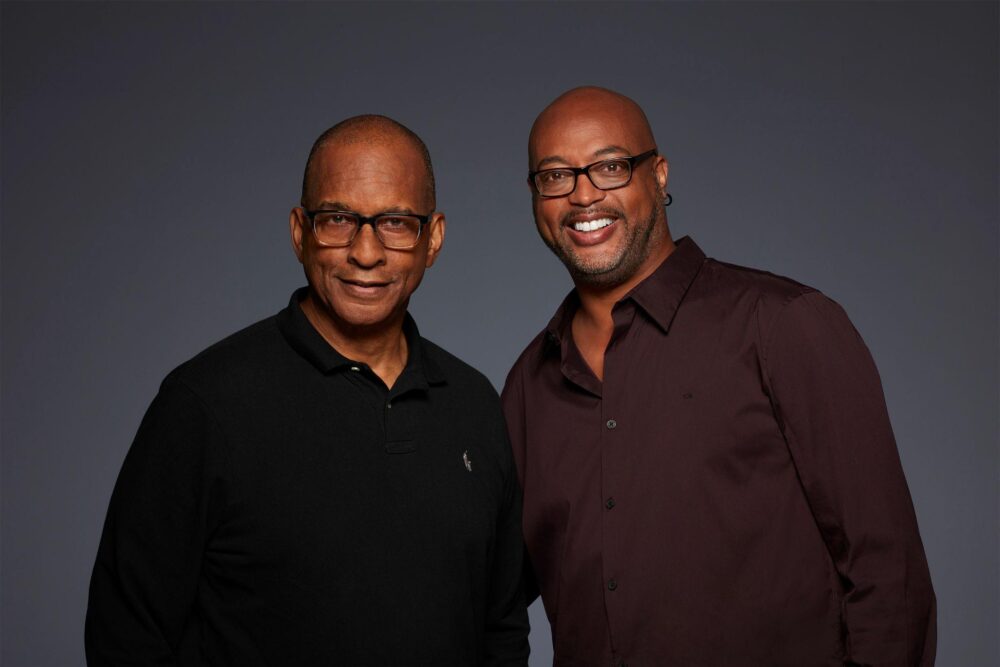 “Timing is everything,” Farquhar adds, recounting how often they had asked Disney about a revival over the 16 years since the show had last aired in 2005. “Hey, we need to come back, we need to come back. And then, finally, they said, ‘Hey, you guys want to do it?’ And as it turns out, you could never anticipate the world, the elements to come into place that have happened over the past couple years, but they did. And a show like this is more urgent than perhaps the first time we were on the air. So, we are just very grateful for having excellent timing.”

The biggest changes to the show are “gender identity, obviously racial identity and quote-unquote wokeness,” according to Farquhar. “All these things we can now address straight up, where 20 years ago, we had to use code to talk about if Michael was gay, to talk about sexuality, we always had to be sort of underhanded about it. Now we can be sort of in your face with it a lot more. And that’s going to be reflected in the storytelling.” 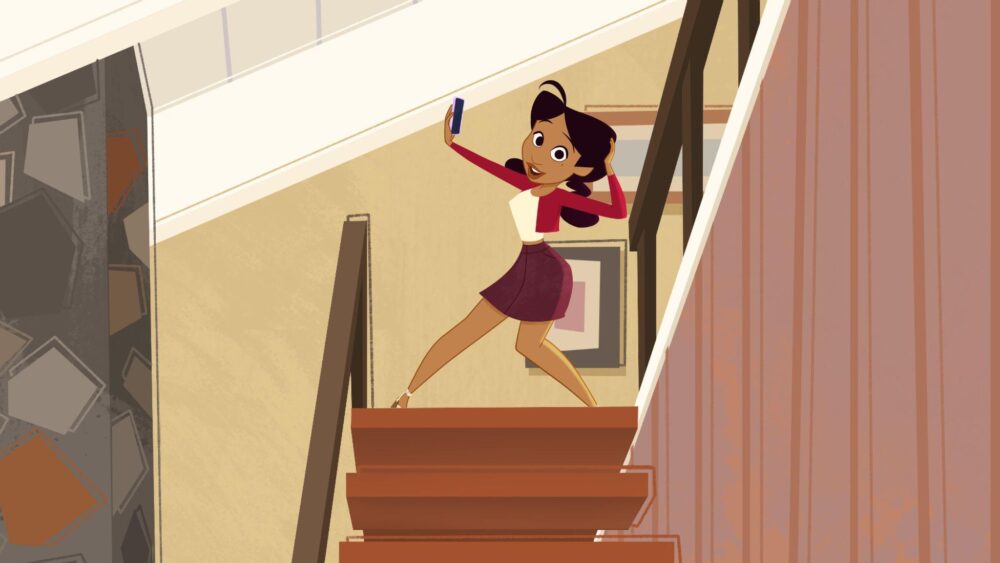 Kyla Pratt returns as the voice of Penny Proud along with most of the original cast for The Proud Family: Louder and Prouder

“We don’t have just one gay person in the show representing the entire LGBTQ+ spectrum, you know what I mean?” Smith adds. “Because that’s not what we see when we go outside. A lot of shows that I remember watching always kind of had just that one character, and it’s just not fair, because that’s not how we see life.”

Louder and Prouder also features a new assortment of recurring characters voiced by A-list talents, such as the Leibowitz-Jenkins family, which includes Maya (Keke Palmer) and KG (Artist “A Boogie” Dubose), who not only have to deal with the struggles of being the new kids, but also — in a first for Smithville — having two dads, Randall (Billy Porter) and Barry (Zachary Quinto). Chance the Rapper, Gabrielle Union, Tiffany Haddish, Lil Nas X, Lizzo, Leslie Odom, Jr. and Lena Waithe, among many other stars, also make guest appearances.

Farquhar says the primary goal for the show was increasing the spectrum of Blackness. “One of the things we’re really glad about with Proud Family is we’re unapologetically Black,” he explains. “We strive to be as authentic as possible as it relates to being Black in America, and all its shades, if you will. So no one character has to carry the weight of an entire race of people.” 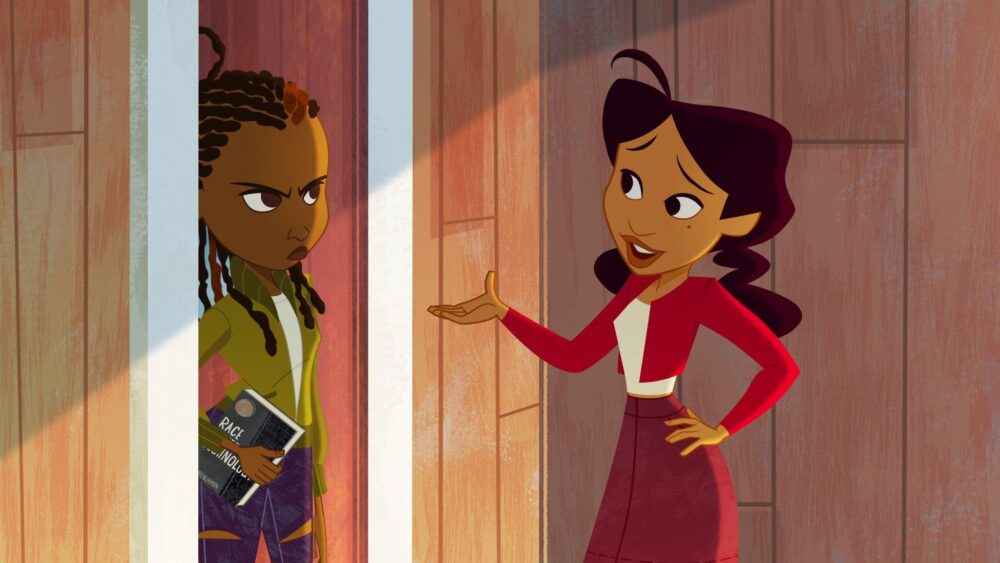 Produced by Disney Television Animation, the visuals for Louder and Prouder are overseen by art director Eastwood Wong (Carmen Sandiego), with the animation provided by WildBrain Studios and Snipple Animation. “Technology’s kind of caught up with the way that we visually create the show, so it’s much more sparkly this time around, and the personalities really read through. The animation really fits the style of the show,” says Smith. “We think it’s a great match of writing with a visual palette that really complements the writing and the humor.”

The “fun part,” Smith said, was ensuring the production crew mirrored the characters and voice cast. “Working with Disney this time, we really filled out our production staff, not only from an artistic standpoint but also, culturally, where we wanted our show behind-the-scenes. If you look behind the curtain, everyone who’s producing the show looks like what you see on screen. So, that idea of diversity and inclusion also exists on the production side of our show. And I think you’ll see it on the screen.”

For episodic directors, Farquhar and Smith opted to work with fresh, untested talents, including Rudi Bloss, Latoya Raveneau and Tara Nicole Whitaker, who would bring an authentic viewpoint to the series. “I have to give special kudos to our female directors, because, the interesting thing about it is … neither Bruce nor I have ever been teenage girls,” says Farquhar. “And when we were teenagers, girls didn’t mess with us! That’s, I think, the extra added element this time around, and that point of view is just exhilarating in terms of the moments and the scenes that were brought to bear.” 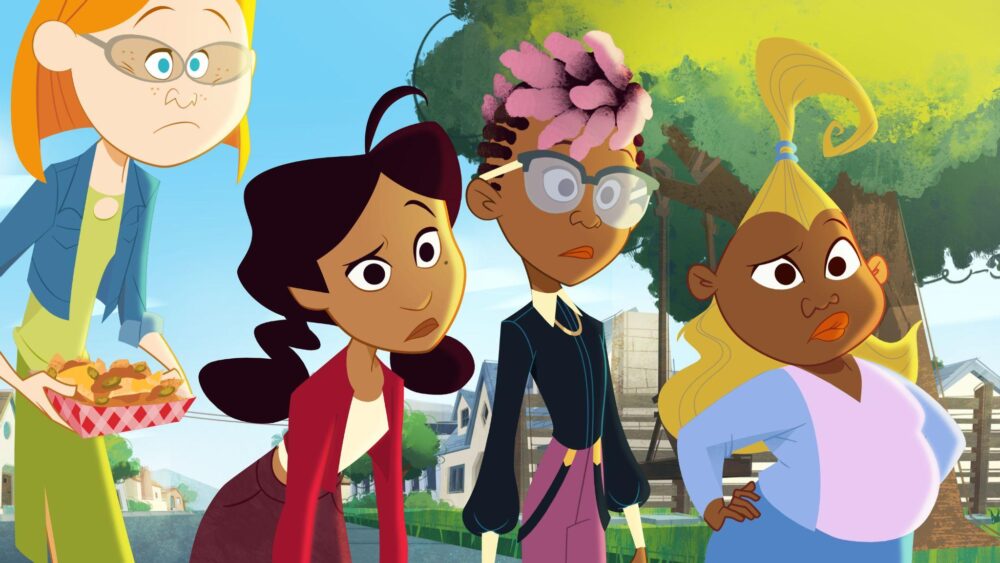 Smith’s new character designs are another big change for the new series. Penny and her friends have all been given a makeover, and characters such as Penny’s uncle, Bobby Proud (Cedric the Entertainer), have also been updated for the new millennium.

“When Ralph and I sat down and talked about what we wanted to do moving forward, one of the things we thought was important was to sort of age the characters up,” Smith recounts. “They still look the same in essence, but we aged the characters up, and visually take the show with it.”

Taking Penny Proud and her friends on a sometimes emotional journey of discovery in Louder and Prouder, the EPs knew the visuals “had to ride with that,” as Smith puts it. “There’s a level of dimension that we’ve added to the visuals to make sure they can help carry the weight of these stories,” he says.

“We knew that there was a certain level of gravity that we were going to add to the show. We get very emotional at times,” Smith continues, noting that Penny and her friends experience several new firsts, many of them fraught. “So there’s a certain cinematic touch we give to these emotional scenes that we probably did not do the first time around. But we made sure that we really leaned into those opportunities to make sure that they’re as believable and as touching as they can possibly be. And then, when we go off the chains and get very wacky in certain episodes, we really bring that cinematic touch to that as well.” 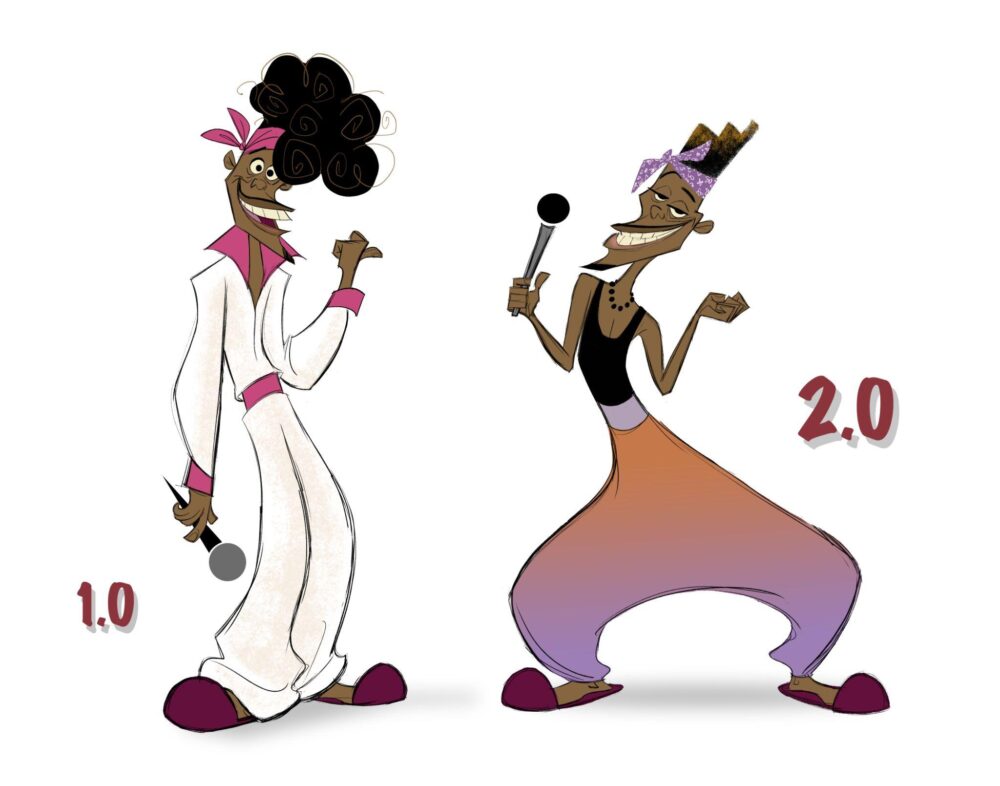 Uncle Bobby (Cedric The Entertainer) wore a dated disco suit in the original — in the redesign, he bumped up a decade with a pair of (equally dated) Hammer pants.

Acclaimed composer, songwriter and producer Kurt Farquhar, who wrote and composed the iconic theme song for The Proud Family, also returns as series songwriter and composer for Louder and Prouder. The new theme song, which preserves the lyrics and melody of the original, is performed by rising R&B star Joyce Wrice.

“You can’t mention our show without mentioning music,” says Smith. “Solange and Destiny’s Child did a fantastic job of really laying out the original theme song, so we wanted to hand over that mantle to someone else to realize the full potential of what they laid out for today.”

The process for selecting songs begins in the writer’s room, as Farquhar relates. “It starts between the young writers and the old writers,” he says, describing how they would go back and forth from current needle drops like Lizzo to redoing songs by older artists like Shuggie Otis and The Brothers Johnson. 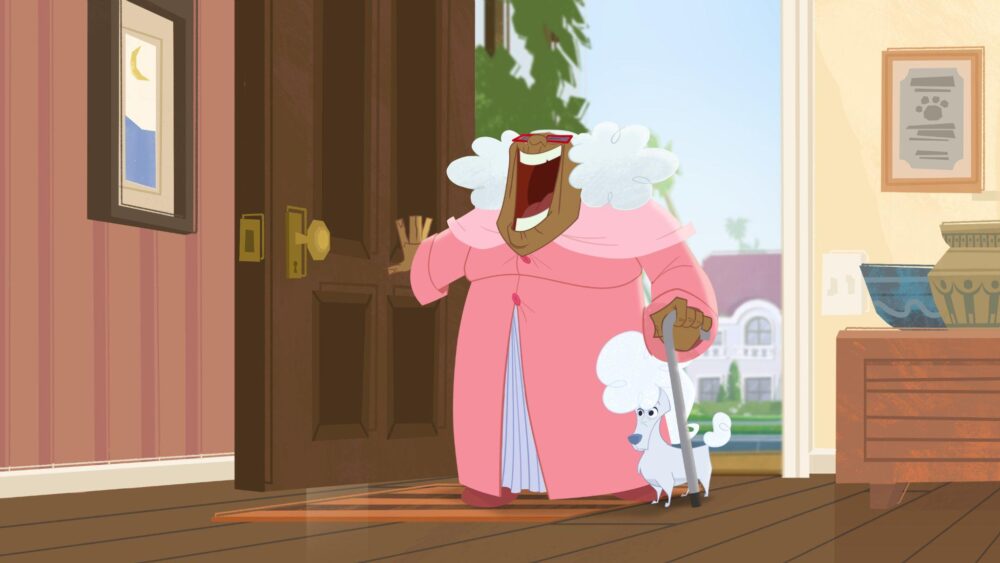 Looking back on The Proud Family’s legacy, Farquhar says, “I don’t think we were quite aware how important this show was to young Black kids at the time, people of color in general. In the ensuing years, it’s just come to us over and over where people say, ‘Oh my gosh, I really love this episode, it had Muslims in it,’ or ‘Oh, I loved the first time I saw myself in a cartoon.’ It became clear to us that the show for whatever reason was very, very, very important to people. And so we know we have a huge responsibility to our audience. There are high expectations.”

Beyond crafting a hit show, the EPs have equally high expectations for themselves. “Hopefully this show will resonate, not only with the audience that has now grown and has children that are 12 and 14, but also with the young kids today. And that they will see themselves, that they will hear themselves reflected in what we’re doing,” says Farquhar.

“So our hope is that this show turns out to be as important to a new generation as it was back in 2001 when we first premiered. Normally, you wish you have ratings and you make money. But our hope is to really provide a template for a new generation, what it means to be Black in America, and one that they can watch over and over again, enjoy and laugh about. Hopefully, 20 years from now, someone will say, ‘Hey, I remember Proud Family back in 2022. That was my jam.’”

The Proud Family: Louder and Prouder premieres on Disney+ on February 23.

A Cartoon Movie Sampler: A look at some of the big movies showcased at the event
Joe Hsieh’s ‘Night Bus’ Makes a Stop at New Yorker Screening Room