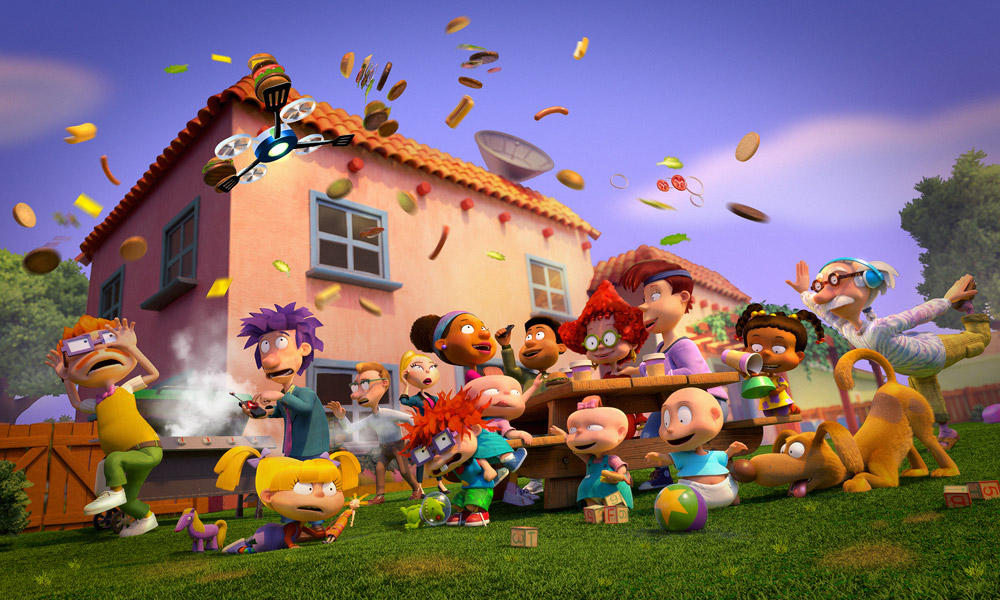 That sound you’ve been hearing is the collective cheers of the children of the 1990s who are celebrating the return of Tommy, Chuckie, Susie, Angelica and the rest of the Rugrats clan to the small screen. The folks at Nickelodeon and Paramount+ unleashed the reboot of the hugely popular Rugrats series this Thursday, May 27, in hopes of introducing the franchise to a new generation of fans.

The show, which originally debuted in the summer of 1991, was created by Arlene Klasky and Gábor Csupó (of the famous Klasky Csupo studio) and Paul Germain (Recess, Lloyd in Space). Thirty years later, the iconic babies and their families’ adventures are CG-animated and they have to deal with social media and all the trappings of life in the 2020s! 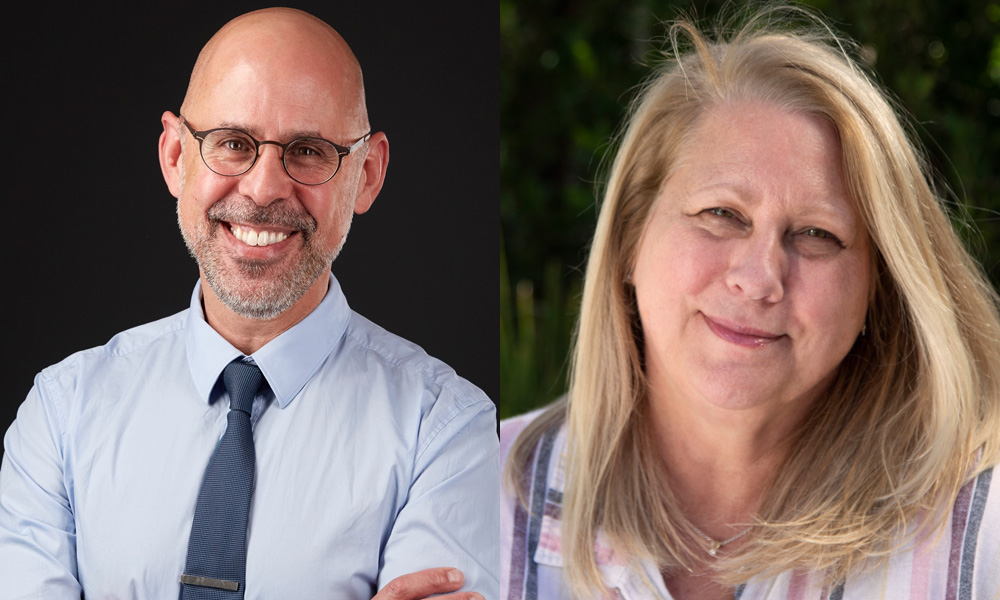 For Rugrats exec producers Eryk Casemiro and Kate Boutilier, who also worked on the original version three decades ago, the series has been a sweet homecoming. “Writing dialogue for characters that we wrote for some 25 odd years ago felt like getting a hug from an old friend,” says Casemiro, who is also Nickelodeon’s senior VP of preschool programming. “To have the original voices who played the babies come back to play them again was incredibly heartwarming for us.”

“It was truly goose-bump inducing to see and hear Tommy Pickles again,” adds Boutilier, whose many credits also include The Wild Thornberrys, As Told by Ginger, The Mr. Men Show, Olivia and Poppy Cat. “We know the fan base is super strong, and like them, we all have indelible memories of the show and these characters. We hope they like the new series, too.” 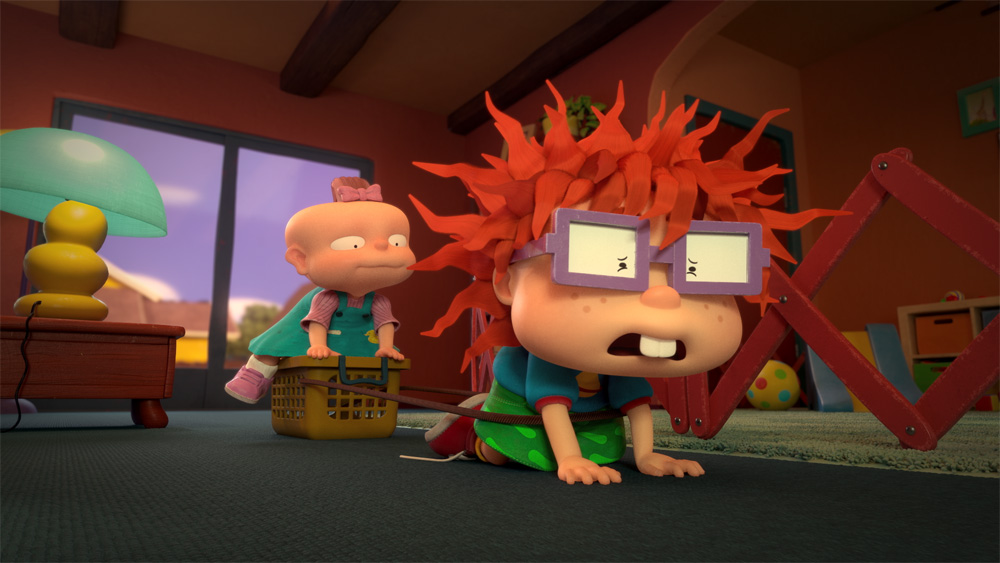 Casemiro and Boutilier began working on the reboot in early 2019. “We actually met on the show back in the day and we’ve had a long career together,” reminisces Casemiro (Duckman, Rocket Power, As Told by Ginger, Rugrats: All Grown Up!, The Wild Thornberrys). “When we started planning the show, we didn’t even know it was going to be a CG iteration. It was simply exciting for us to be able to have these characters to play with again.”

Casemiro points out that the show’s original creators were also on board to offer their input and suggestions. “Arlene and Gábor were the architects behind the series, and we had their input along the way. They gave us a little bit of oxygen, too, to take our own spin on the characters and to re-imagine them for a new era.”

The show’s beloved characters were updated to fit the needs and social framework of audiences in 2021. “Because the original is nearly 30 years old, some of the social satire that worked back then doesn’t feel right today,” explains Casemiro. “For example, in the old show Charlotte Pickles was portrayed as this female executive who was always on this bulky, brick-sized cell-phone, and that needed adjusting. Grandpa Lou is now a veteran of Woodstock instead of World War II. We also revisited the relationships between the adults and made connections that weren’t clear in the original.”

Boutilier says the show creators knew that modern-day millennials who grew up with the show would be in their 30s. “We did the math of how old the new parents would be,” she notes. “We also changed what their friendships would be like. Everything had to be plunked in today’s world.” 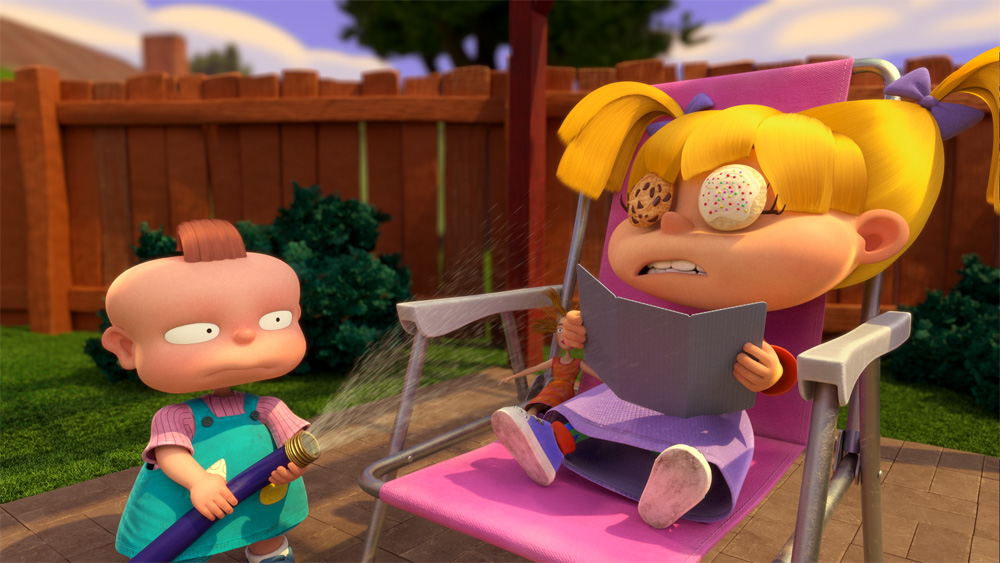 Keeping Up with the Times

There were a few course corrections, too. They made the Susie character slightly younger so that she could no longer talk to adults and spoil Angelica’s plots. That gave the writers more freedom with the plot developments and kept Susie part of the core group of babies.

“We had a lot of fun weaving in new technologies into the show as well,” says Boutilier. “We had to imagine how babies react to a smart speaker or respond to a tablet when their grandparents show up on a video call.”

There’s also more diversity in the cast of characters. The Betty character (Phil and Lil’s mother) is now a Latina and is part of the Carmichaels’ main group of friends. Charlotte’s exec assistant Jonathan is now a Latinx character who plays a much bigger role in the show. Grandpa Lou also has a wider, more diverse group of friends that he interacts with throughout the series. 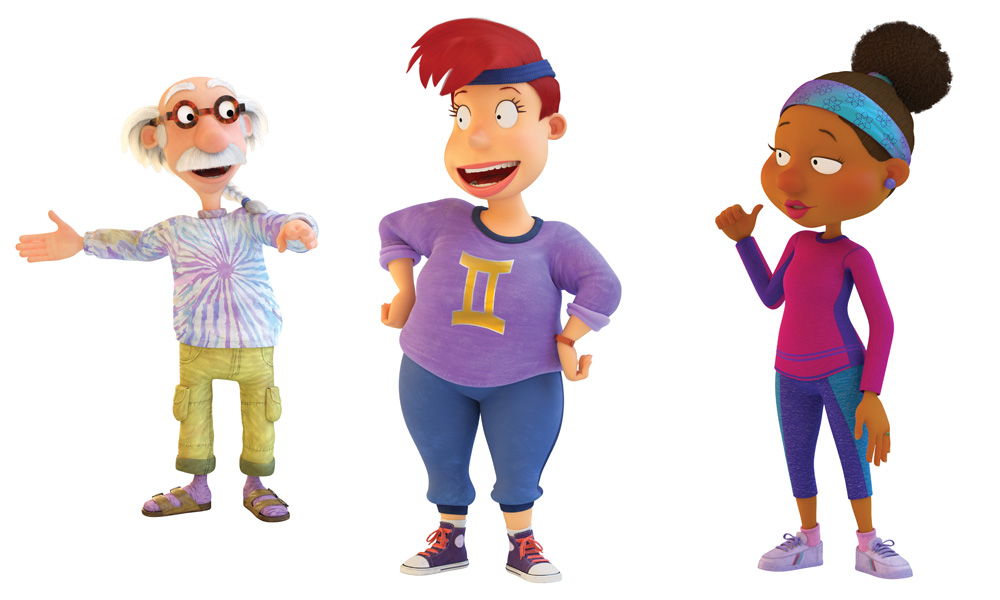 The series’ transition from 2D to CG animation had its own share of trials and challenges. According to the exec producers, it wasn’t easy to translate the wacky, distinctive “ugly cute” character design and animation to the more rigid CG universe. “The translation was quite tricky because one move to the left, and the show would be too cute,” notes Casemiro. “We didn’t want to just interpret the show in CG. We had to deliberately measure the original designs and made sure we had the right version in CG. Arlene and Gábor went back to the archives and looked at the original character designs to get all the details — which included the asymmetry of the eye sockets — just right. ”

The producers point out that they incorporated a very deliberate art direction so that everything, from the giant heads to the little pieces of food stuck in the carpet, feel perfect in this new CG Rugrats world. “Everything is still lumpy, but things are in CG,” adds Boutilier. “The color palette is still unusual, and the sets, the props, the colors of the sky, everything retains that special feeling — they’re fresh and updated in CG, but they feel familiar at the same time.”

Lighting also plays an important part in this new world. As Casemiro explains, “CG opened up a lot of possibilities in the lighting area. Our exec producer Casey Leonard (Breadwinners) and the directors helped create this new lighting schematic where the kids’ world is more shadowy because they’re closer to the ground, while the adults are lit differently because they’re higher up. This creates a special mood that is very different from other shows.” 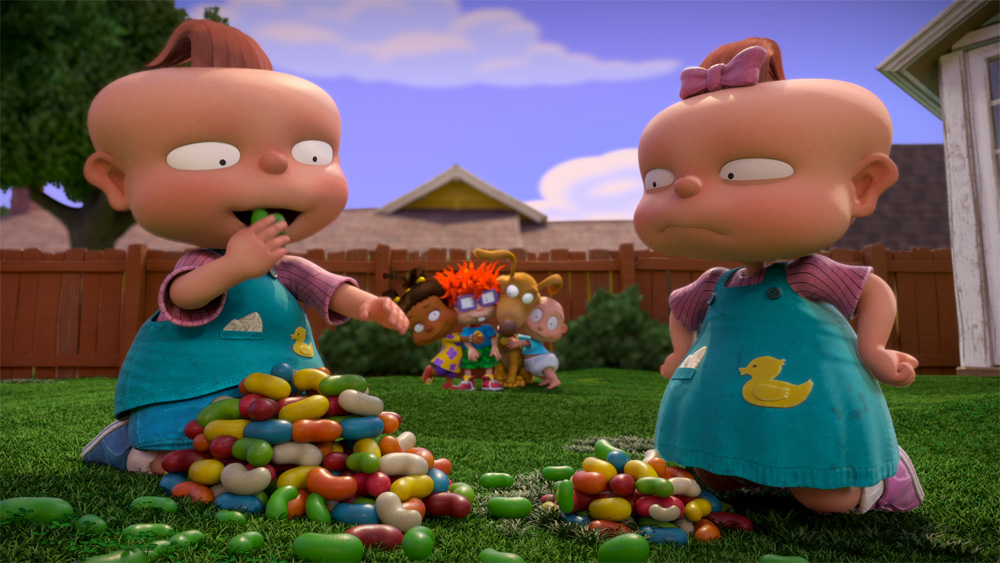 Boutilier also explains that the lighting and CG animation also pushed the fantasy segments to a higher level. “You can really step inside the kids’ fantasies when they’re in the background, whether they’re inside a glowing cave of treasures or traveling in space,” she notes. “Between the lighting and the set designs, we think these set pieces are pretty vivid and spectacular.”

About 50 people worked on the first season (26 x half-hour) of the new show. “We have a small group of writers created for ideation in-house and used a pool of about 18 freelancers, some of which were original Rugrats writers, as well as some that were fans of the original show,” says Casemiro. “We were able to use a diverse writing pool. The front end of the animation was produced at Nickelodeon in Burbank. A lot of the original asset designs were done in house, and Technicolor and Xentrix in India helped out with the rest of the animation production. It takes us about 18 months to produce an episode from start to finish.” 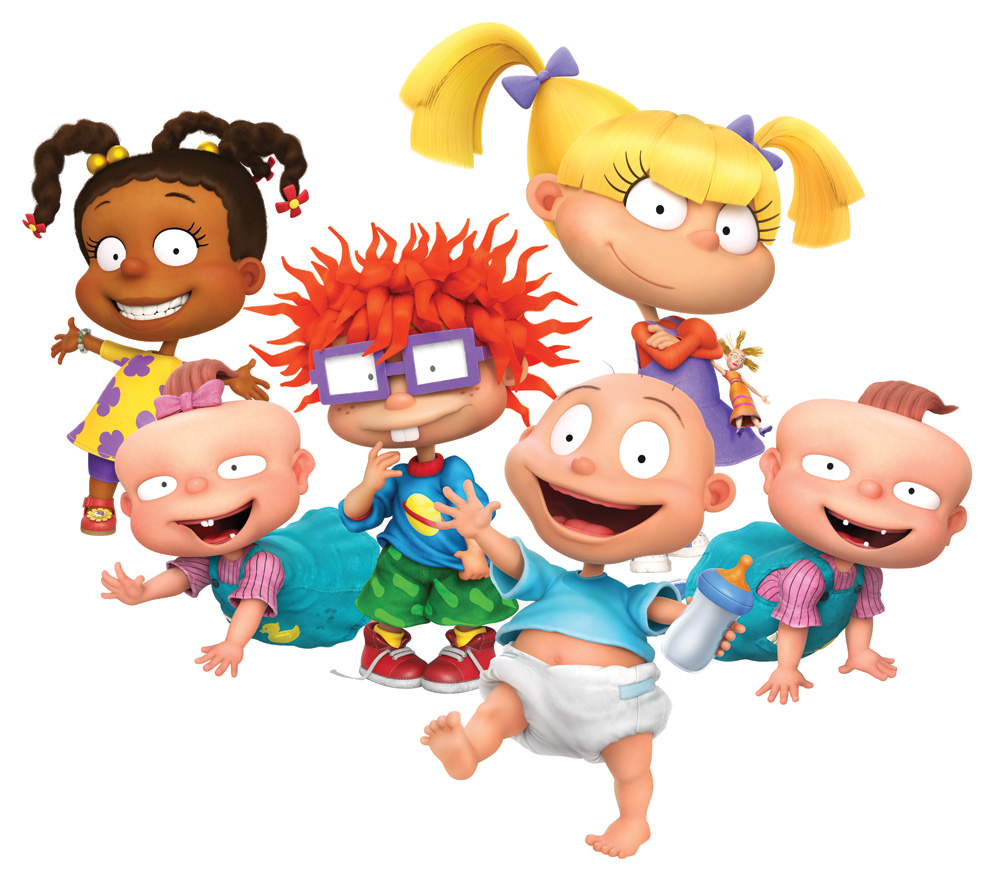 Now that they are ready to release their new baby into the streaming wild (the show premieres on Paramount+ and airs on Nickelodeon later), the two talented showrunners are hoping that fans will embrace the new take on their beloved characters. “I hope it does what the original did,” says Boutilier. “It’s a co-viewing show, so we hope that adults love the grown-up characters and kids love the core friendship of the babies. Older kids like how much the babies get away with and the funny way they speak. We hope the show crosses overboard and entertains different audiences.”

Casemiro adds, “When the show first came out, it was very novel to see the world through babies’ eyes. Every one of those characters was an archetype that audiences could relate to. Angelica was the big sister at home, Tommy was a hero, Chuckie was the scared one … This was one of the first shows about the original modern family, with everyone interacting and the kids being each other’s best friends.”

“The whole setup was that these characters were babies, but they were pondering life’s big questions, just like a kid who was watching the show might be wondering about the same things,” adds Boutilier. “We hope to continue that tradition.”

The Rugrats premieres on Paramount+ on May 27. The show will also air on Nickelodeon later this year.