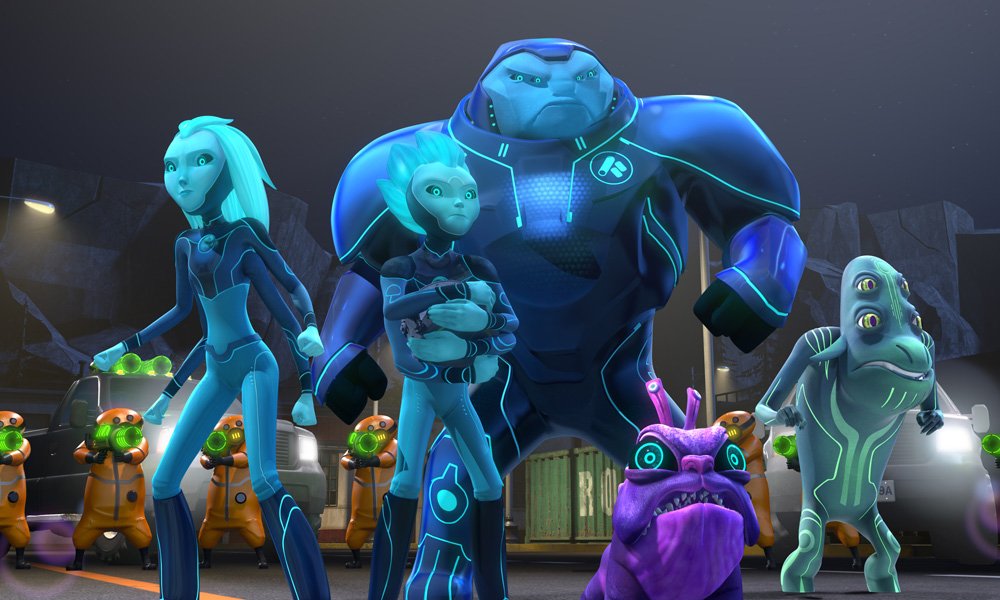 If you’re going to launch an animated series trilogy, it helps when the first chapter of the franchise becomes a global hit, winning several Emmy and Annie Awards along the way. Of course, it doesn’t hurt if the show is created by Oscar-winning maestro Guillermo del Toro. In fact, it was about half way during the second season of DreamWorks’ hit series Trollhunters that exec producers del Toro, Rodrigo Blaas, Marc Guggenheim and Chad Hammes realized they could expand the world of the show far beyond the initial premise of the series.

This new extension of their fantasy world is introduced in Tales of Arcadia: 3Below, which premieres on Netflix this Friday (Dec. 21). Featuring a dynamic voice cast that includes Diego Luna, Tatiana Maslany, Glenn Close, Nick Offerman, Andy Garcia, Nick Frost, Chris Obi, Uzo Aduba, Tom Kenny and Danny Trejo, the series follows two teenage aliens from a royal family, Aja (Maslany) and Krel (Luna), and their bodyguard Vex (Offerman), who escape their planet after a hostile takeover and crash-land on Earth. They land in Arcadia, the same town where the events of Trollhunters takes place, and have to blend in as they try to fix their spaceship to return to their home planet.

“[This] is what happens to everybody that has an immigration story,” says del Toro. “You can be a surgeon in your country, and you can reinvent yourself driving a cab or doing something different, and you become sort of invisible in a way. And I thought, Wouldn’t it be beautiful if that story happened to a prince, a princess and a royal bodyguard?” 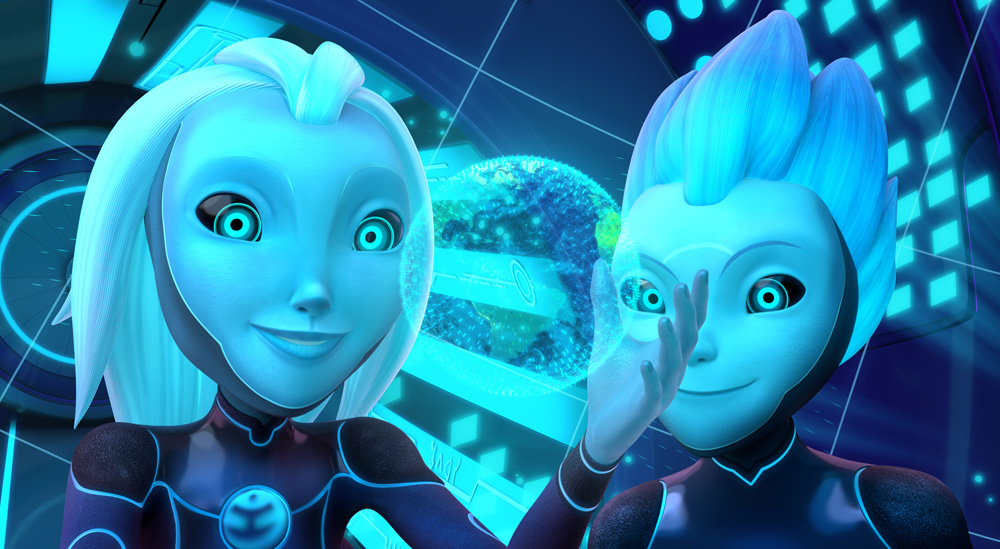 “Guillermo had these ideas about expanding the world for quite a while,” explains Hammes, whose credits include Dragons: Race to the Edge, Puss in Boots and Madagascar 3. “Once Trollhunters built up speed, captured the attention of audiences and Guillermo was happy about the quality of the work, we started to think about this new world of 3Below.”

Exec producer Blaas, whose animation credits include Ice Age, Up, Ratatouille, Finding Nemo, The Incredibles, WALL·E and Brave, remembers the day when del Toro came in with the pitch for the trilogy. “He said, why don’t we use Arcadia as the center point for many adventures that will take place? So the idea for these aliens disguising themselves as kids and going to the same school from Trollhunters was crystalized.”

Adapting to a New World

Blaas, who was born and raised in Granada, Spain, and now lives in the U.S., says the show’s premise spoke to him on a personal level. “This is a project about aliens that have to leave their planet and adapt to a new home,” he says. “In a way, I’ve had to do the same thing. I think we address a very universal feeling, whether you’re moving from a city another city, or a different state or country, it’s something that many of us have to go through in life.” 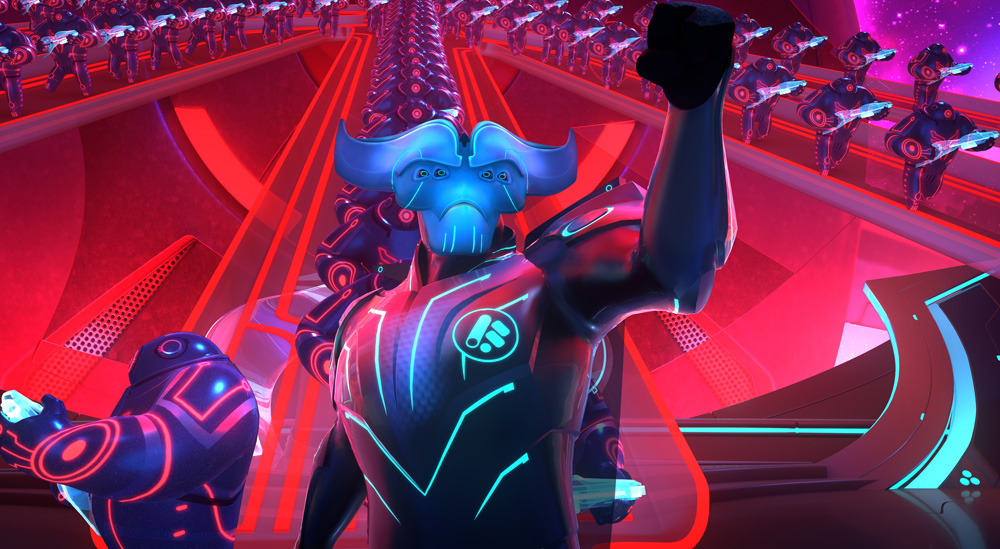 While the series is put together by the same team that worked on Trollhunters, there are certain qualities that set it apart from the first offering. “Trollhunters was more of a hero’s journey, while 3Below is a more of a comedy, a fish-out-of-water story,” says Hammes. “We had a different challenge in the way we wrote, directed and produced it. The show speaks to things that are happening in this country culturally. Beyond the message of ‘Don’t judge the book by the cover,’ the new series also explores the meaning of home and family. Here we have three characters who flee to Earth after their home is torn apart by a civil war. They learn how to be a family together in this new place. It resonates deeply in this country where we are facing migrations and immigrants.”

The animation production is divided between DreamWorks’ Glendale campus, Original Force in China, 88 Pictures in India, CGCG in Taipei and House of Cool in Toronto (for storyboards). Overall, the show has about 600 staffers, 75 of whom are based at DreamWorks. The animators use Maya and Arnold to produce the animation. “We’ve perfected Arnold on Trollhunters,” says Hammes. “We use the same basic tools, but it is really all about the designs. We learned a lot on the first series. We know what our strengths are and really aimed to raise the bar with 3Below.” 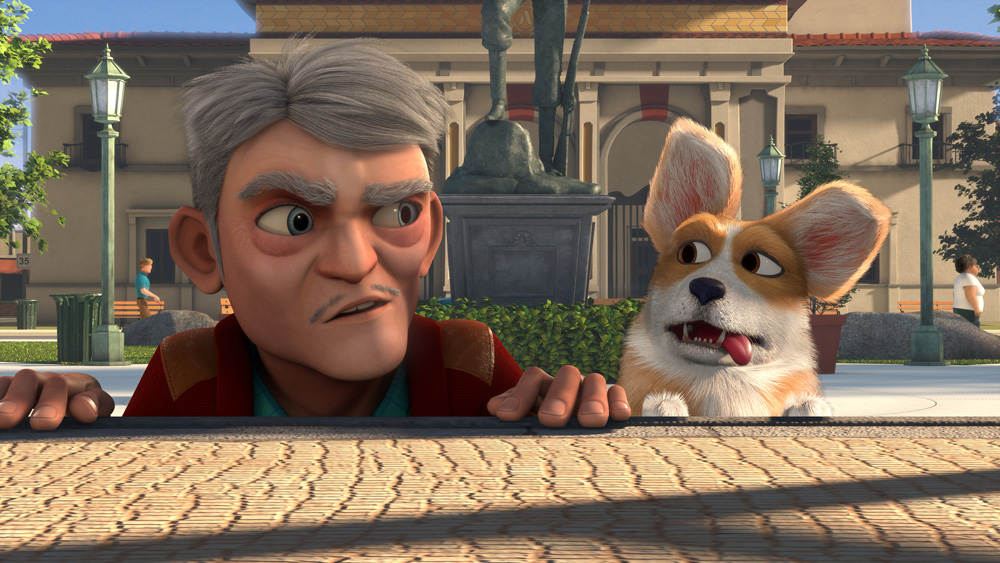 Exec producer Guggenheim, who has worked on many live-action superhero series and movies such as Arrow, The Flash, Legends of Tomorrow and Green Lantern, says the project stands out because of its heart, humor and visual panache. “The show tells a more ambitious story, and while we’re pushing the comedy aspects, it’s also more topical and socially relevant, because it deals with issues of prejudice,” he notes. “It really felt like we were pushing the envelope with it.”

Finding the original voice for the show proved to be one of the more challenging aspects of the creative journey. As Guggenheim explains, “For Trollhunters, we had a novel and a complete screenplay to work off of, with many years of visual and character development. For 3Below, we had to invent the show out of whole cloth. We really had come up with the voice of the characters and what they’re each dealing with on the show.” 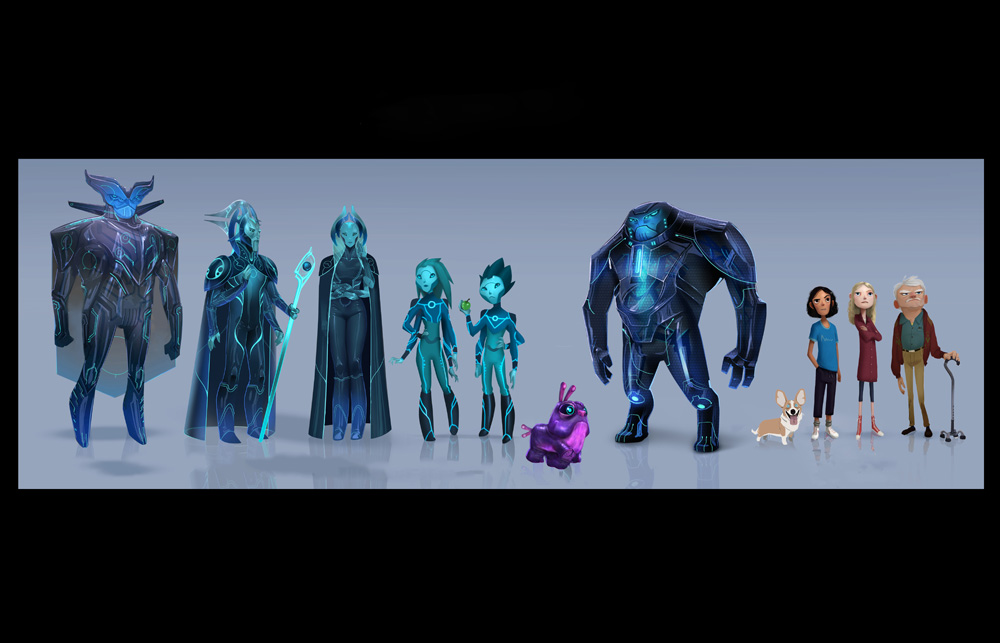 The new show’s visuals are also quite different from the first series. While the look of Trollhunters was influenced by various geological concepts, 3Below is all about light and energy, which fuel the technologies of the alien planet.

“The artists devoted a lot of thought and planning to the show’s visuals,” notes Guggenheim. “In this show, we know that that all of the technology on the planet Akiridion-5 is based on energy, so the aliens’ appearance and design, their weaponry and the overall look of their world is based on that. Because we start off on the alien planet in the first episode, it all looked like Trollhunters on steroids. We had to really blast off with a pop, and the art team did such a remarkable job with that.”

Visions of a Bright Future

Regarding the visuals, Baas says 3Below gave him the opportunity to pay homage to some of the artists he had admired when he was younger. “I loved the art that was featured in Heavy Metal magazine,” he notes. “Because sci fi is not a genre that is commonly explored in animation, I thought this was a great chance to pay homage to artists like Chris Foss and Syd Mead.” 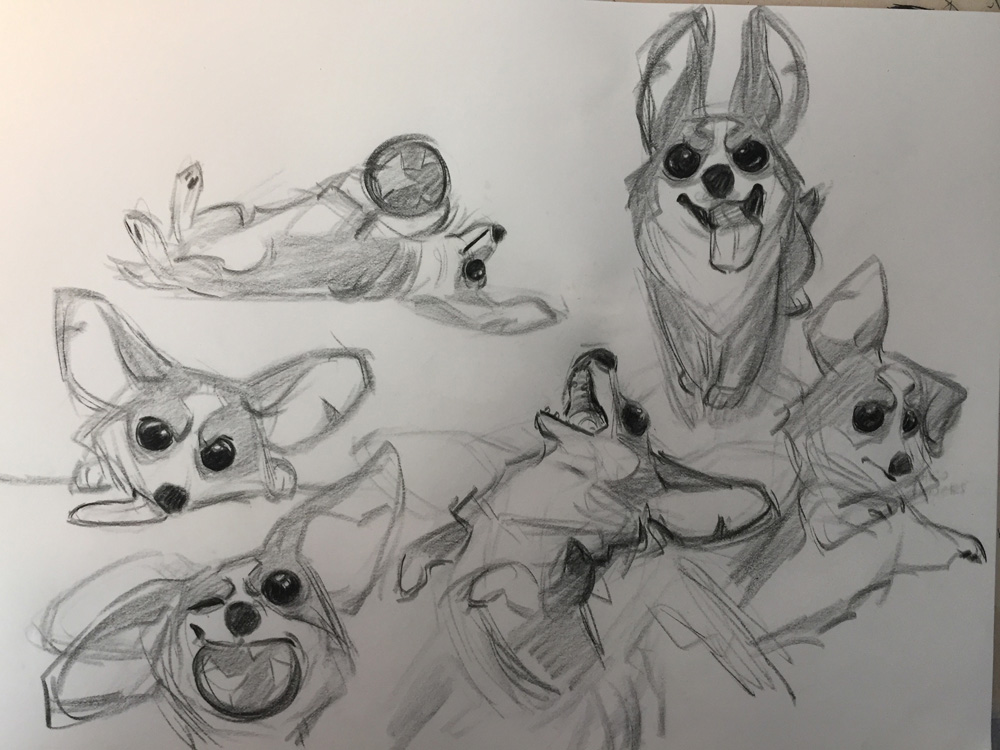 Blaas says the artists also played with the idea of presenting Arcadia from the point of view of the aliens. “We wanted the town to look more lush and interesting,” he notes. “We adjusted and remodeled the look and the lighting and made it look more like the world of American Graffiti, old-school Americana with mid-century designs emerging. You see that very distinctly with the spaceship, which disguises itself as a mid-century California house. Also, to emphasize the world of the aliens, we relied on a limited color palette made of mostly blues and greens and sometimes magenta splashes.”

The exec producers all point out that as busy as del Toro is with his other projects, he remains deeply committed and invested in the new series. “We are even working more closely with him on this show than Trollhunters,” says Guggenheim. “We meet with him periodically and have story, design, art and animatic reviews. All these sessions happen on the same day, so they all inform each other. Working with Guillermo is a very organic process. We are constantly going back and revising things until we have the best show. It’s a very dynamic, organic process in every aspect.”

Blaas says sitting with del Toro in all-day meetings is like attending a master class in filmmaking. “He takes you along on all the different aspects of the filmmaking process — from directing a great cast to staging a particular scene or delivering a comedic sequence,” he notes. “He has a truly incredible eye and is able to focus on all the details that we needed to accomplish in order to push the boundaries of what TV animation can do.” 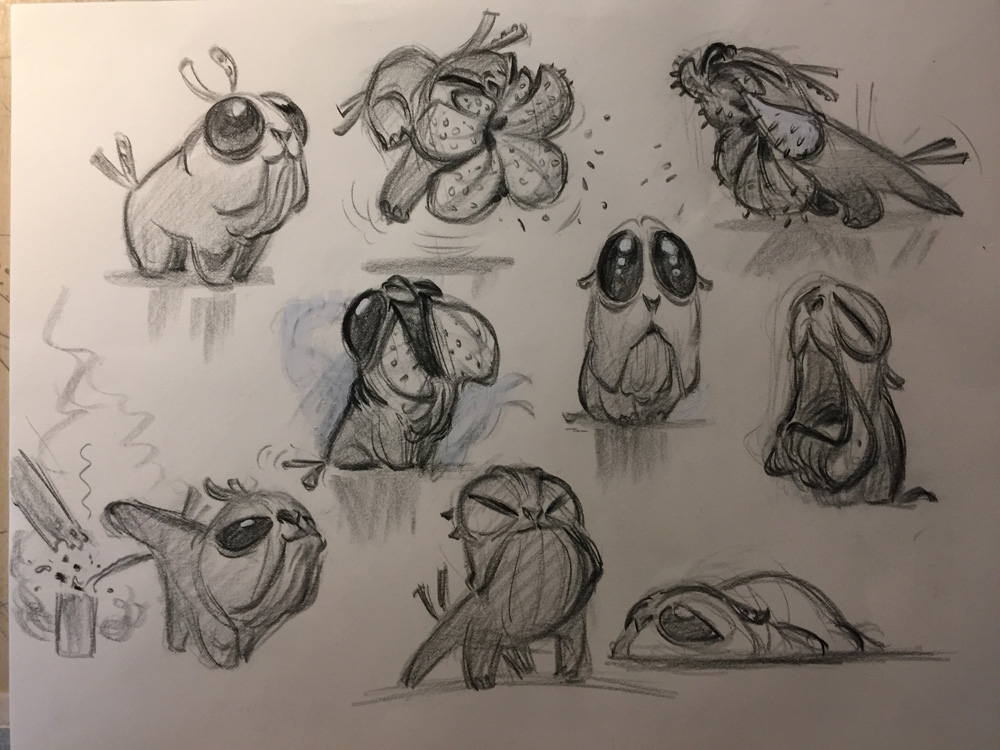 Just as there were seeds planted for 3Below in the third season of Trollhunters, the creative team are making plans for final part of the trilogy, which is called Wizards. “It’s truly a luxury to know where you’re going,” says Guggenheim. “We already have a grand plan, and we’re playing with the ideas of which characters will be coming to the fore in Wizards.”

For now, the producers are hoping that the show can send a positive message to family audiences, while entertaining them with interesting storylines, memorable characters and some good laughs along the way. “We want people to be entertained and hope they’ll come away with a deeper understanding of prejudice and how it affects immigrants in our world,” notes Guggenheim. “Everyone is an immigrant of some kind, and this shouldn’t be a divisive issue. It should bring us all together, particularly in America which has always been a melting pot. If we can inspire important conversations as well as entertain, that would be the icing on the cake.”

All 13 episodes of the first season of Tales of Arcadia: 3Below premieres Friday, December 21 exclusively on Netflix. 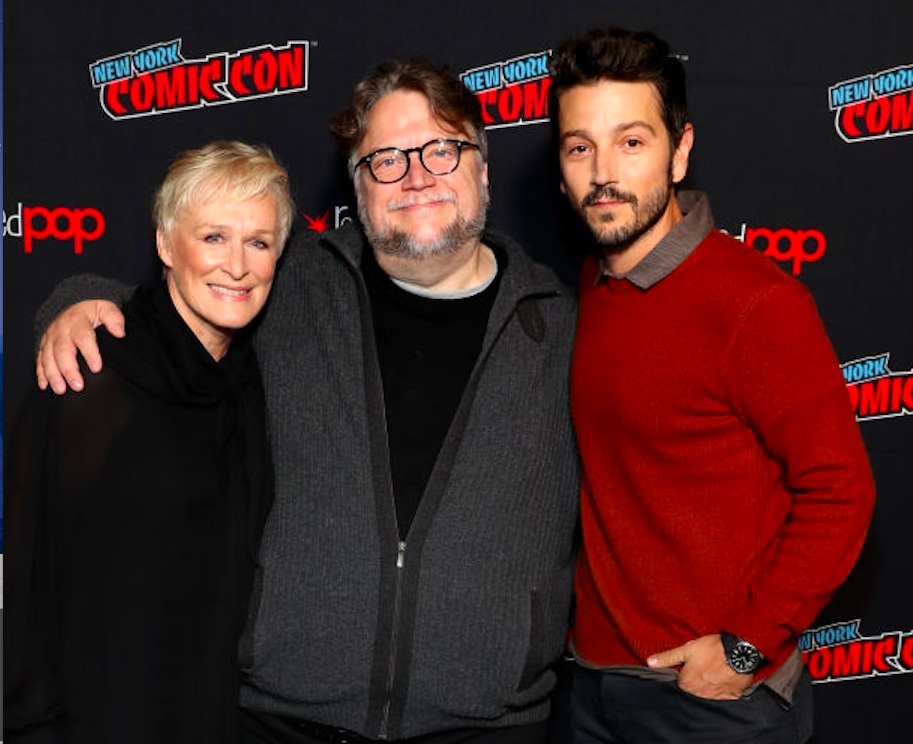