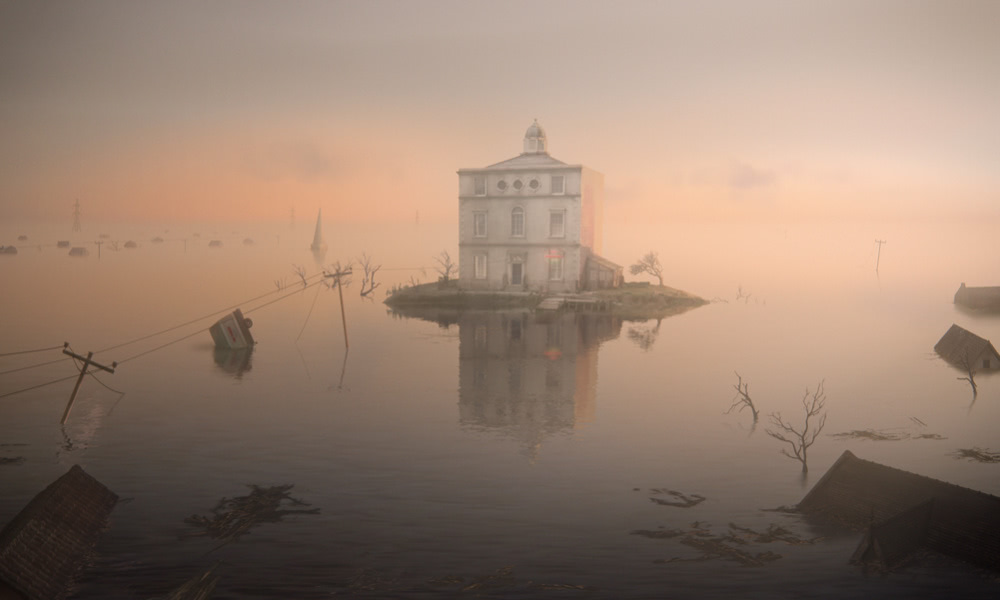 A stop-motion trilogy about the surreal events in a single house over many years may seem ironically apt for this pandemic era, when people have been sequestered at home for so long. That irony isn’t lost on Charlotte Bavasso, the co-founder & CEO of Nexus Studios and producer of the eagerly anticipated Netflix anthology The House. “We’ve had many conversations about that over the months as you can imagine,” she admits. 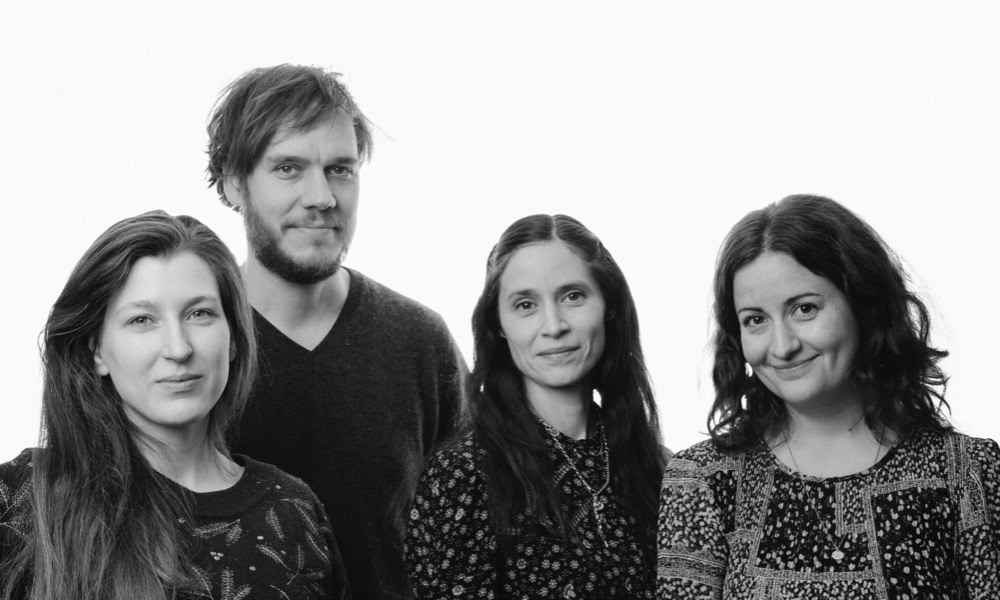 Netflix envisioned The House as a dark adult comedy, and Nexus collaborated with four stop-motion artists who regularly have earned honors on the indie animation scene. The first chapter is from Belgium’s Emma de Swaef and Marc Roels, whose signature wool-crafted puppets peopled their 2012 short Oh Willy… and 2018 Annecy-winning project This Magnificent Cake! Chapter two comes from Sweden’s Niki Lindroth von Bahr, also an Annecy winner whose animal/human characters are the enigmatic stars of her stop-motion shorts Bath House (2014), The Burden (2017) and Something to Remember (2019). The trilogy’s closer is by London-based actress/director Paloma Baeza, whose BAFTA Award-winning short Poles Apart had previously prompted Nexus Studios to begin development of a series based on her polar bear characters.

The collaboration between Nexus and this diverse group of artists began with what Bavasso calls “a huge brainstorming session.” Fortunately, this occurred before the pandemic lockdowns began. “We invited them to London, and they came up with stories that fit in different eras of The House,” she explains. “The story by Marc and Emma takes place in the early 19th century, while Niki’s story explores what is happening now, and Paloma’s story is set in the near future. It was important that each maintained their individuality in their characters and in the look of their films. The follies unfolding in The House are fantastic.” 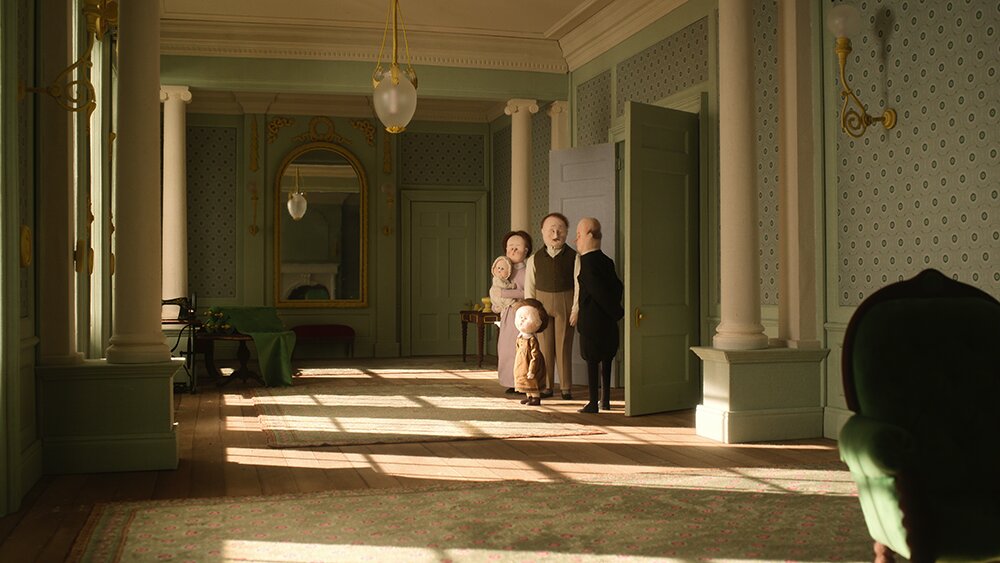 The house itself, which takes shape before our eyes during the opening piece by Marc Roels and Emma de Swaef, was the handiwork of production designer Alexandra Walker, whose many credits include Tim Burton’s Frankenweenie. “Alex did an amazing job of making a general design for the three films, and then elaborating our chapter’s specific style,” says de Swaef. “Our house is a maze that expands and changes all the time.”

The pair’s eerie tale follows a poor family as it succumbs to the temptations of a mysterious benefactor, a choice that places two young children in peril. The filmmakers’ wooly characters, with their beady eyes reflecting flickering lights, makes the gothic horror of the piece especially poignant. “It’s always tricky to animate humans in stop motion,” notes de Swaef. “For us, the key to avoiding the uncanny valley is to stay very stylized and slightly naïve in the designs of the puppets. We like to focus on good posing and elaborate finger movements, and otherwise keeping the acting very pared down.” 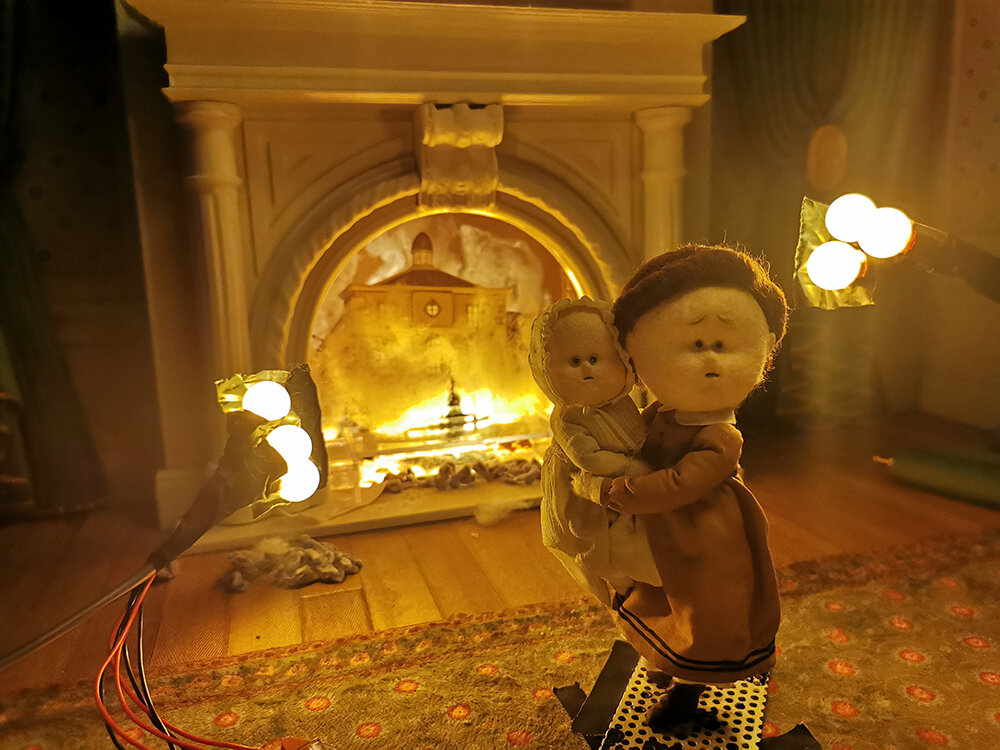 A prime challenge for the directing duo, known as Marc & Emma — as well as for their fellow indie animation directors — was working with the dialogue penned by Irish playwright Enda Walsh, whose accolades include a Tony Award for the Once stage musical. “Working with Enda was incredibly inspiring,” recalls Roels. “Up until this film, we’d written everything ourselves, so it was refreshing to hear how someone with no knowledge of stop-motion would approach our style. His particular sense of humor really meshed well with ours, and he wasn’t afraid to take the story to dark and interesting places.”

Bavasso explains that because the chapters in The House had no narrative connections, it was essential that Nexus find a writer to tie them together into a 96-minute experience. “The directors wrote detailed story outlines, and then Enda collaborated with each to develop their dialogue. It was definitely new for them.” 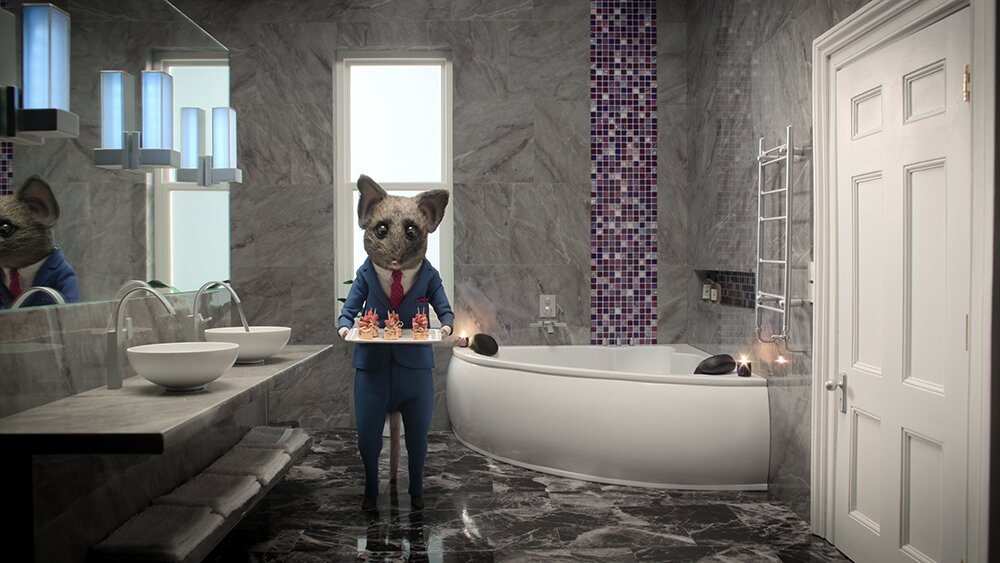 You can really hear the wordsmith’s influence in the colloquial language of the very contemporary second chapter, directed by Niki Lindroth von Bahr. Her protagonist is a real estate developer who’s desperate to renovate and sell the now rickety house, and who becomes increasingly unnerved by an insect infestation and an oddball parade of potential home buyers. While the characters move like humans, they have the heads of mice. The director explains, “As the developer is put under more and more pressure, he’s regressing into the animal that he actually is.”  Her inspirations are very telling — including David Lynch’s Lost Highway, another film in which a relaxed atmosphere devolves into a nightmare.

The central, silent character is “The House” itself — a modern mess, defying the property developer’s frantic efforts to attract upper-class buyers. “I work with quite lengthy scenes that allow you to really take in the surroundings,” von Bahr explains. “I collaborated with the art director Nicklas Nilsson, who worked with me on The Burden.” She admits they had fun creating the house’s lavish interiors, spending hours of research watching reality shows such as MTV Cribs and Keeping Up with the Kardashians! 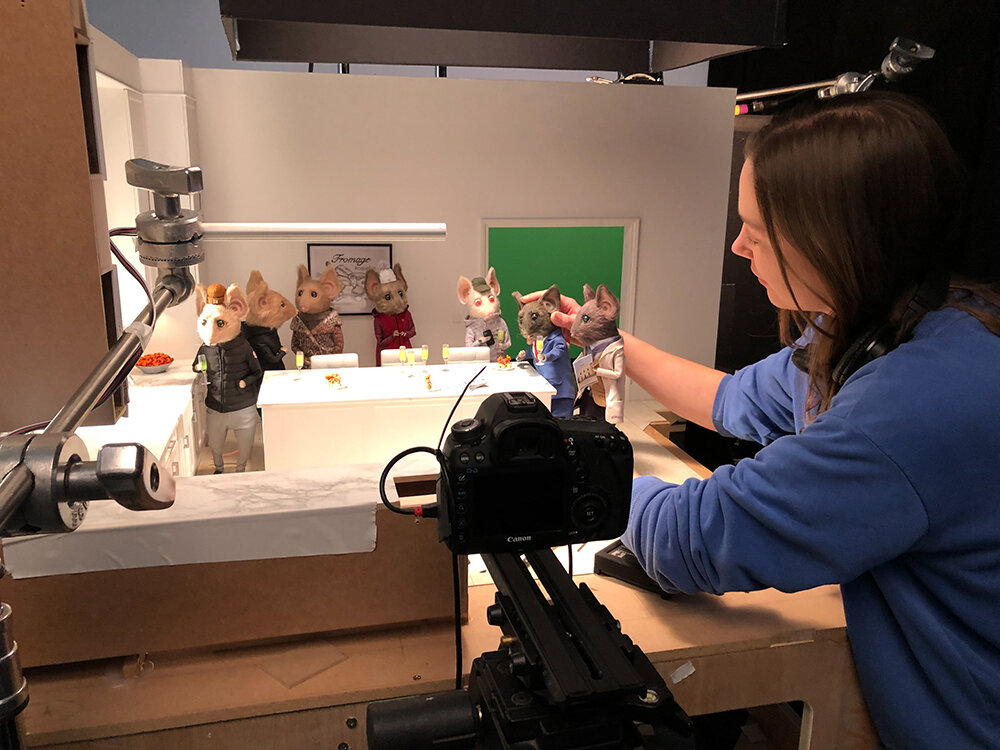 The state of the building only gets worse in the series’ closing chapter, directed by Paloma Baeza. Set in the not-too-distant future, Baeza’s story reveals that the house is slowly drowning in rising waters wrought by climate change. Its current owner, a humanlike feline, has subdivided The House into apartments. She makes hopeless efforts to restore the structure, even as her tenants prepare to move out. Paloma Baeza says, “She has an absurd inability to see what’s right in front of her. Her blinkered obsession with restoring the house in the face of the extreme circumstances surrounding her can be seen as a metaphor for our own reluctance to face difficult changes in life.”

One of these tenants is memorably voiced by Helena Bonham Carter, who previously worked with Baeza on Poles Apart. “I was so delighted that Helena wanted to collaborate again,” says the director, who has extensive acting credits herself. They were lucky enough to schedule in-person recording sessions between COVID lockdowns instead of recording remotely, which was a relief. “I’m very hands-on when working with actors in voice sessions,” admits Baeza. “Coming from an acting background, I guess it’s my comfort zone.” 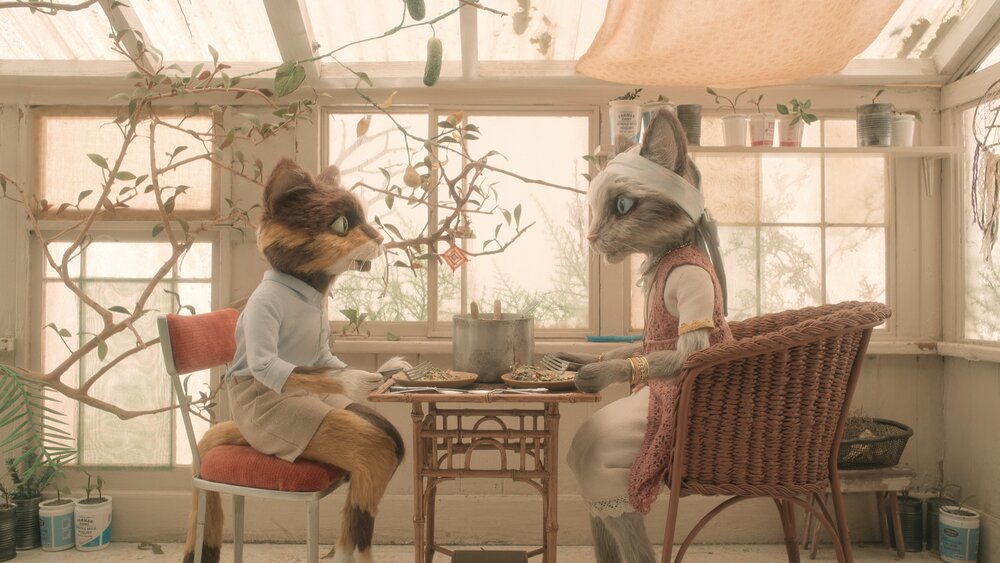 Fortunately, the Nexus animation crews were also able to work within pandemic protocols and collaborate with the directors on set during their shoots. They were then able to return home and continue collaborating via remote sessions. Bavasso notes, “Nexus was really running three productions at the same time. We had a clever schedule in place, where we effectively had two crews moving from one film to another, while the third film was happening in parallel. We had around 300 people working over 20 weeks for each film.” Of course, it helped that line producer Angela Poschet had previously worked on Tim Burton’s Frankenweenie and Wes Anderson’s Isle of Dogs. “These directors were not used to working with large production crews —  though I’m not sure they’ll ever go back now!” says Bavasso.

Von Bahr confesses that she initially was nervous about participating in such an ‘upscale’ production, where she couldn’t be hands-on for the fabrication of her puppets and sets. “My previous films were basically only me in a basement. The Nexus team made this project a lot easier — and much more fun — than I expected. It’s simpler to be brave creatively when you have good backup, and you don’t need to solve all the problems yourself. My story was unusual, and I’m thankful Netflix allowed me to tell it exactly the way I wanted.”

“Visitor” puppets created for Story 2 of The House (Nexus Studios)

Roels, who’s known for the expressive lighting on his films with de Swaef, recalls, “We had a bit of trepidation about working with a cinematographer for the first time. It was a huge relief that our director of photography Malcolm Hadley was such a great collaborator who immediately understood our methods and quirks, and still managed to enhance the whole thing. Our one big demand was that everything — as much as possible — be done in-camera.  That usually means avoiding a lot of things that normally make life easier, like greenscreens and digital compositing.”

This requirement made it especially challenging to animate the crackling fires that were prevalent in this period piece. Hadley and animation director Tobias Fouracre developed a ‘flame look’ by combining light effects and replacement tufts of wool. As de Swaef remarks, “They became so expert that by the end we were looking forward to the fire shots.” 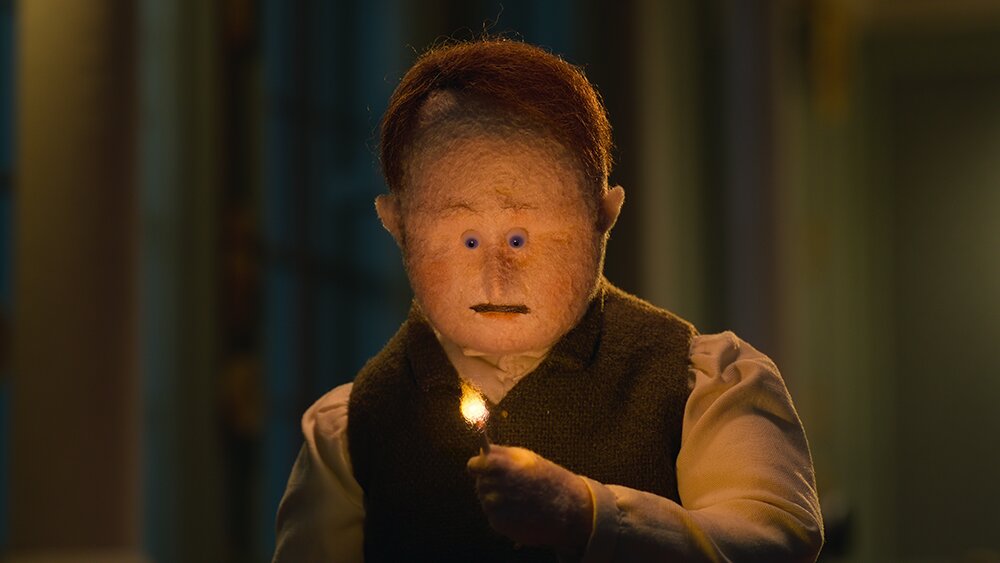 However, the Nexus crew did employ some significant digital effects in the second and third chapters of The House. Von Bahr had envisioned a comical way of depicting the bug infestation plaguing the house — so Nexus used digital effects to choreograph dozens of bugs dancing in Busby Berkeley style. Then, Baeza’s story required literally drowning the house, so several scenes were shot against greenscreen.

“We had the challenge of creating water, but we also had mist. Because I wanted a particular sense of ‘reality’ — despite the surreal nature of the world — we used a mixture of techniques which were seamlessly merged by our great visual effects team,” Baeza explains. “For the water, we shot some stop-motion elements in camera, using glass and hair gel, which were then manipulated, re-sized and composited with other live-action elements. The mist is a mixture of live-action elements (with altered frame rates) and our own CG-generated mist.” 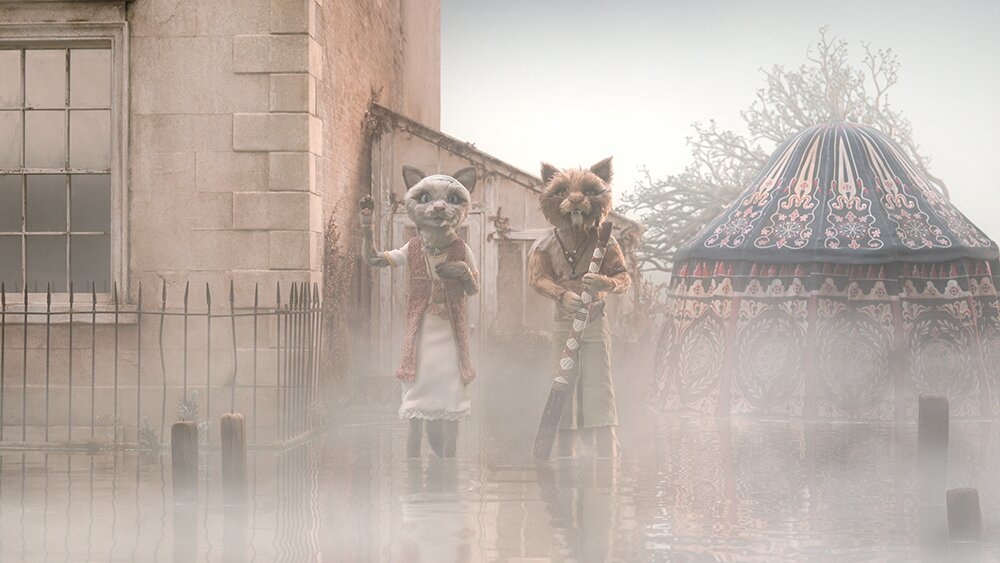 As she looks back on the experience of producing the challenging project, Bavasso thinks that the unusual format makes it stand out from other anthologies. “Adult animation seems to have been confined largely to 2D comedies. We’re proud to have given extraordinarily talented stop-motion directors a platform they’ve never had before. The incredible reach of Netflix means their work will be accessible to 220 million people.”

The directors themselves admit they don’t know what reactions to expect when The House begins streaming in January  After years of working in stop-motion solitude in Stockholm, von Bahr says, ”It’s still a very demanding and expensive kind of animation. It’s almost impossible to make a living from it in Sweden, especially when working on the adult scene. Hopefully, The House will spark some new interest in this ancient —  and pretty bonkers — art form!”

The House premieres globally on Netflix on January 14.