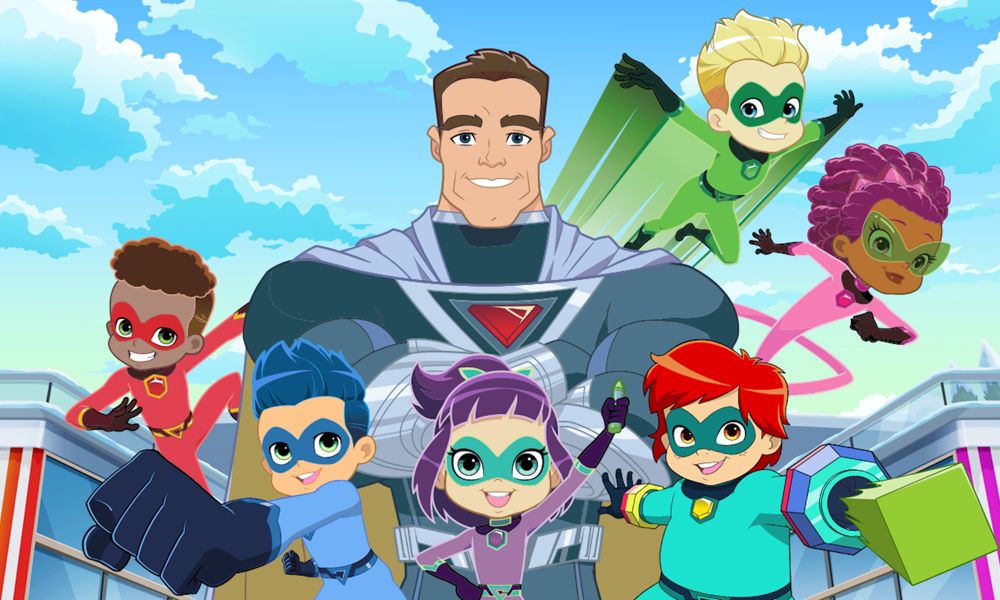 Sponsored by toy company Laser Pegs, the weekend event will be preceded by an introduction from Schwarzenegger himself, and will air beginning Friday, January 29 at 12 p.m. EST through Sunday, January 31 at 11:59 p.m. PST, exclusively on Kartoon Channel! In addition to content “Brought to you by Laser Pegs,” the toy company will provide prize packs of their unique STEM construction toys for social media promotions across Kartoon Channel! platforms.

“I am excited to work with Genius Brands to share a first look at Stan Lee’s Superhero Kindergarten, my first ever animated children’s series coming this spring to the Kartoon Channel!,” said Schwarzenegger. “I am especially proud and honored to bring Stan Lee’s vision and one of his last creations to life in this masterful production, sharing positive nuggets of value such as health and fitness tips, inclusivity, diversity, anti-bullying and more.”

Stan Lee’s Superhero Kindergarten, an action-adventure comedy series, is one of the last creations from the genius mind of the late Stan Lee. The school day at Superhero Kindergarten is a lot like that at any other kindergarten … except these six extraordinary students have a secret: They are superheroes! Rather than powers derived from a radioactive spider bite or gamma rays, these special kids’ powers come from common kindergarten items like white glue, putty, building blocks and yes, even farts (yuck!). And thankfully, they have Arnold Armstrong (a.k.a. Captain Fantastic, the greatest superhero to ever live!) as their teacher (voiced by Schwarzenegger).

“This unveiling is a special event for Genius Brands, as it represents the culmination of countless hours of hard work by some of the most proven hit makers in the entertainment industry. Stan Lee, Arnold Schwarzenegger and John Landis, together, have been responsible for billions of dollars of box office revenue from hit movies, series and consumer products, and we have no doubt that more magic will be made with Stan Lee’s Superhero Kindergarten,” commented Andy Heyward, Chairman & CEO of Genius Brands. “We are especially excited to help realize this vision of Stan Lee and look forward to bringing a broad array of truly unique consumer products to retail.”