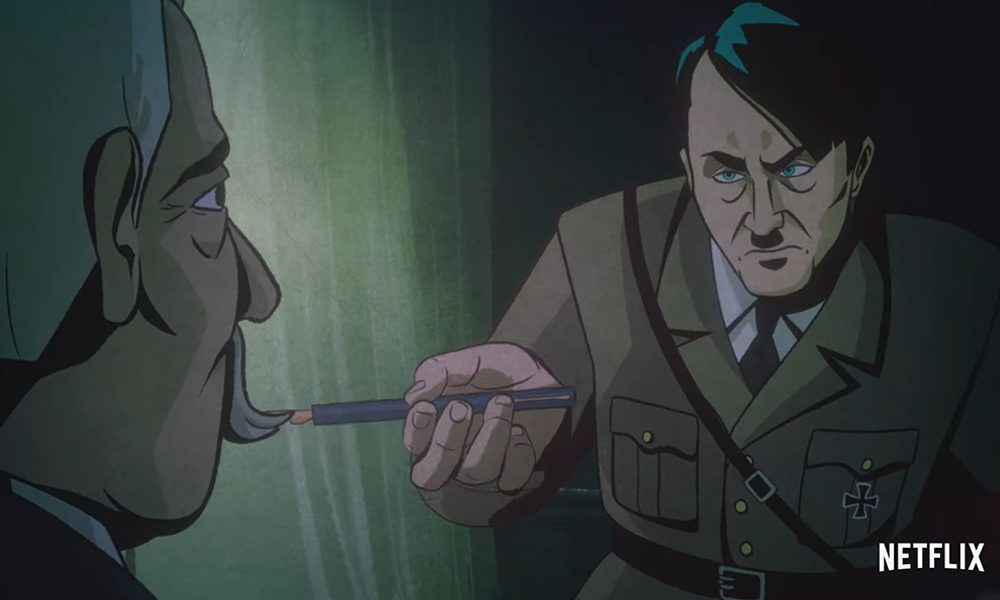 How to Become a Tyrant

The atrocities perpetrated by some of the world’s most notorious and dangerous political despots are at the heart of How to Become a Tyrant, the Netflix series debuting July 9 – but executive producers Peter Dinklage and Citizen Jones’ Jonah Bekhor and Jonas Bell Pasht wanted to find a way to depict the brutality that didn’t rely on much-seen archival footage or re-creations.

The series turned to animation studio Six Point Harness to help them develop visually striking animated sequences that could showcase the power these political leaders had over their nations and the world while providing audiences with a novel way to revisit the history.

The animated sequences infused into all six episodes of How to Become a Tyrant allow the series’ producers a way to show the actions and consequences of these dictators, and to illuminate how they rose to and maintained power over millions. The series offers extraordinary insight into the steps taken by six tyrants: Adolf Hitler, Saddam Hussein, Joseph Stalin, Idi Amin, Muammar Gaddafi and Kim Il Sung, exploring their surprisingly similar formulas for achieving and holding on to power.

“The world knows these men and what they have done, and to examine their steps to terrifying power we knew we had to find a unique approach and tone. Animation was critical to that,” said executive producer Bell Pasht, co-founder of Citizen Jones.

Bekhor, executive producer and co-founder of Citizen Jones, added, “Animation allows us to depict actions and consequences that might otherwise seem unwatchable, and to illuminate history in a compelling way.”

As seen in How to Become a Tyrant, the work of L.A.-based Six Point Harness showcases a stark and haunting style, with animation directed by Ron Myrick, that allows the studio to showcase its diverse creative ability.

“Working with Citizen Jones on this expansive, complicated project allowed us tremendous creative exploration, resulting in an evocative, expressionist style that captures the terror of these regimes and the people who suffered through them,” said Vera Hourani, supervising producer at Six Point Harness. “This was a challenging exercise to present their stories in a way that is artful, tasteful and exciting to watch.”

Award-winning animation director Myrick said, “This was one of the most unique projects of my career. It was a great challenge to portray history, the essence of what these terrible people did while not getting too graphic but enhancing the narrative.”

How to Become a Tyrant continues a creatively rich and diverse slate of award-winning projects for Six Point Harness. The studio’s eclectic, artistically vibrant work has recently been seen in projects as varied as the Oscar-winning animated short Hair Love, Netflix’s delightful children’s series Waffles + Mochi, the Emmy-winning Cosmos: A Spacetime Odyssey and its sequel Cosmos: Possible Worlds, Adult Swim’s lauded Lazor Wulf, Amazon’s Guava Island and animated sequences in such series as HBO’s Backstories, AMC’s Dietland and ABC’s Black-ish. Some of the studio’s most expansive work will be seen this summer when HBO presents the first-ever fully animated stand-up comedy special, starring Tig Notaro.