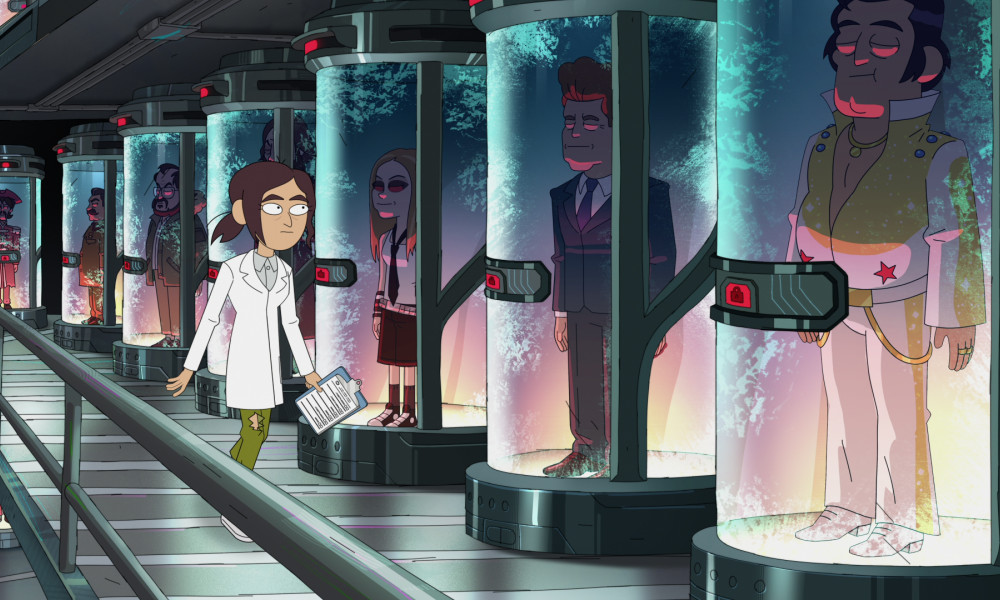 The United States as depicted in Netflix’s new 2D-animated series Inside Job is rife with good news and bad news. The bad news is that, within the show’s context, Deep State really exists and it’s even worse than you thought: A chaotic shadow government ruled by mysterious overlords controls the president (which it attempts to replace with an A.I. robot until that goes rogue) and struggles to keep everything from lizard-people to cloned Kennedys under wraps.

The good news? If you’re already a sociopathic conspiracy theorist … congratulations! You’re not as crazy as everyone else thinks! 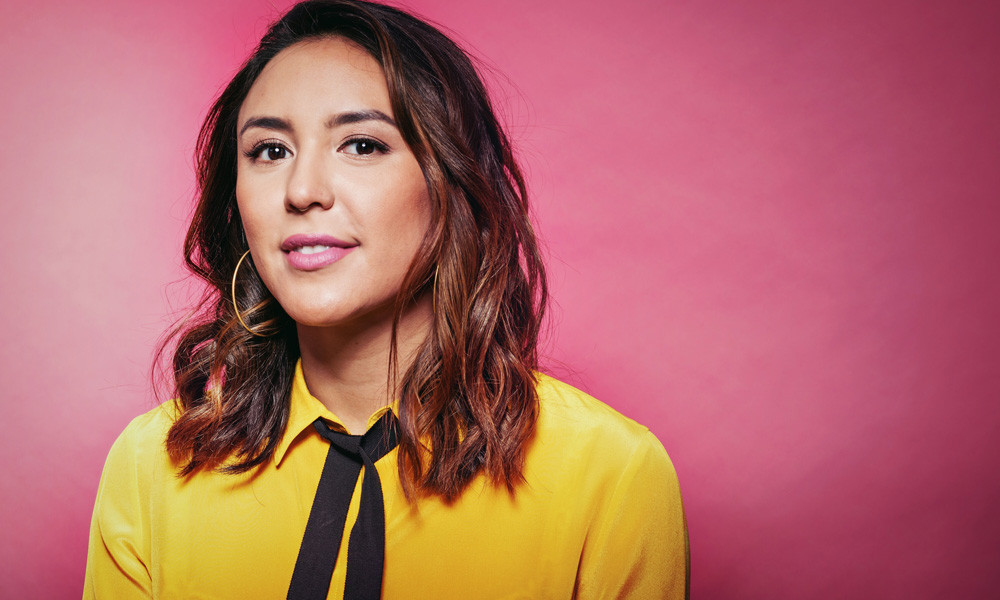 Inside Job, which premieres this month, is the first series out of the gate from the production deal between Netflix and story artist/writer Shion Takeuchi, and also the content platform’s first adult animated series created in-house. The show’s animation is produced out of Los Angeles at Netflix Animation Studios. Industry veteran Mike Moon, who is the head of the company’s recently-established adult animation division, tells us, “It’s no secret that there is an enormous audience for adult animation worldwide. A few years back we decided to build an internal studio to produce some of our adult titles. Shion was the first creator that we brought in-house and we are so excited to share her amazing creation with the world.” Takeuchi is co-executive producing the show with Alex Hirsch, the acclaimed creator of Gravity Falls.

Much of the humor of Inside Job is rooted in the notion that preventing the end of the world on a daily basis has to be done on the time clock, with coffee breaks. “It’s an absurdist workplace comedy,” notes Takeuchi, who was previously best known for her work on animated shows such as Gravity Falls and Disenchantment. She says that her interest in conspiracies and the paranormal began when she was in college and discovered a late-night radio show called Coast to Coast AM, which promoted outré theories about what was really going on in the world. “That’s where I first heard the term ‘shadow government,’ painted as a group of secret elites in the true seat of power, playing four-dimensional chess,” she says. “But if there really was a shadow government, it would be composed of people just like you and me: chaotic, selfish, vulnerable, emotional and messy. The truth is, humans could never manage a shadow government … it would be total effing chaos!” 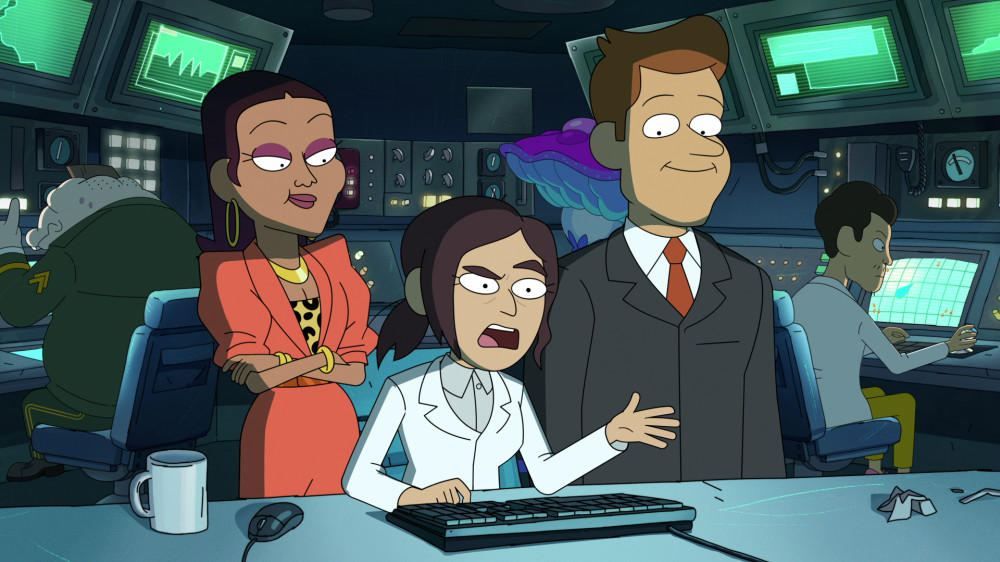 Speaking of total effing chaos, the job of keeping the world’s head from exploding within the show falls to an ambitious yet idealistic woman named Reagan Ridley (voiced by Lizzy Caplan), whose manifesto-scribbling father Rand (Christian Slater) used to run the clandestine operation known as Cognito, Inc. until he became too paranoid for even Deep State. “Helping” her are ultra-militaristic Glenn Dolphman, who is indeed a human/dolphin hybrid (John DiMaggio); Gigi Thompson (Tisha Campbell), the gossipy queen of Media Manipulation; chem wizard Dr. Andre Lee (Bobby Lee), who never met a drug he didn’t like; and a foul-mouthed mushroom creature from Hollow Earth named Magic Myc (Brett Gelman).

In other words, an office staff a lot of viewers will recognize, at least metaphorically. 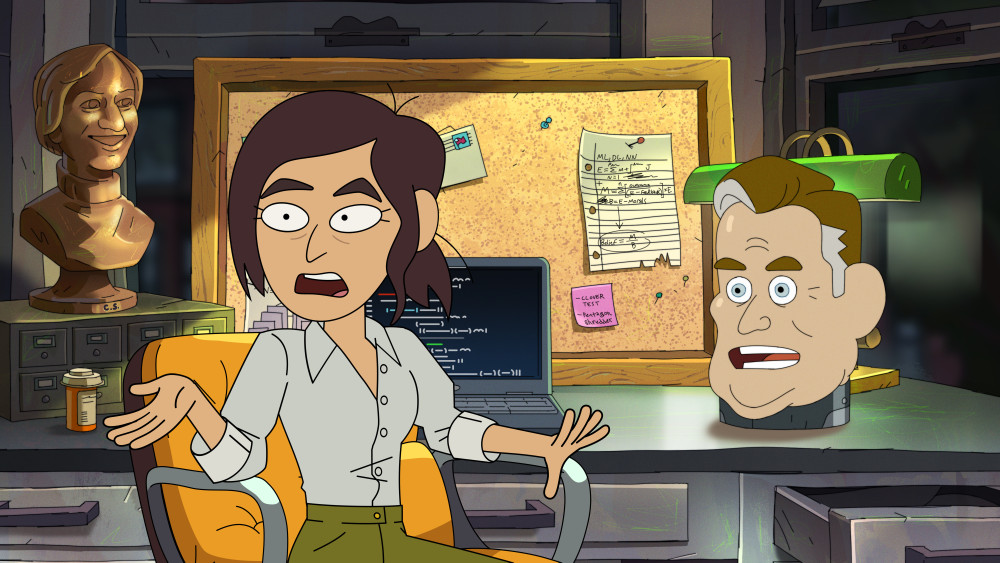 Complicating matters further is the fact that Reagan is forced to share her supervisory duties with a know-nothing, overaged frat boy named Brett Hand (Clark Duke), who is put in the co-top-spot because he’s a lot more likeable than Reagan. The entire uneasily-truceful team reports to Cognito’s gazillionaire CEO J.R. Scheimpough (Andrew Daly), or at least pretends to.

Takeuchi, who is in the showrunner chair for the first time, admits to having at least a slight personal connection to the show’s lead character. “I’d like to think I’m more nuanced and well-rounded,” she states, “but I will say that during the production, someone would accidentally call me ‘Reagan’ on a weekly basis, so the jury is still out on that.”

She admits, though, that the concept of being in charge carries parallels. “When I developed Inside Job, I was a staff writer. I basically had no idea that I was developing the storyline of what my actual life would become as a first-time showrunner. I had to live the premise of the show as I was making it, in a strangely meta, snake-eating-its-own-tail kind of way.” The experience, according to Takeuchi, caused her to accept that “the phrase ‘the deep state’ refers to the physical appearance of my eye bags now.” 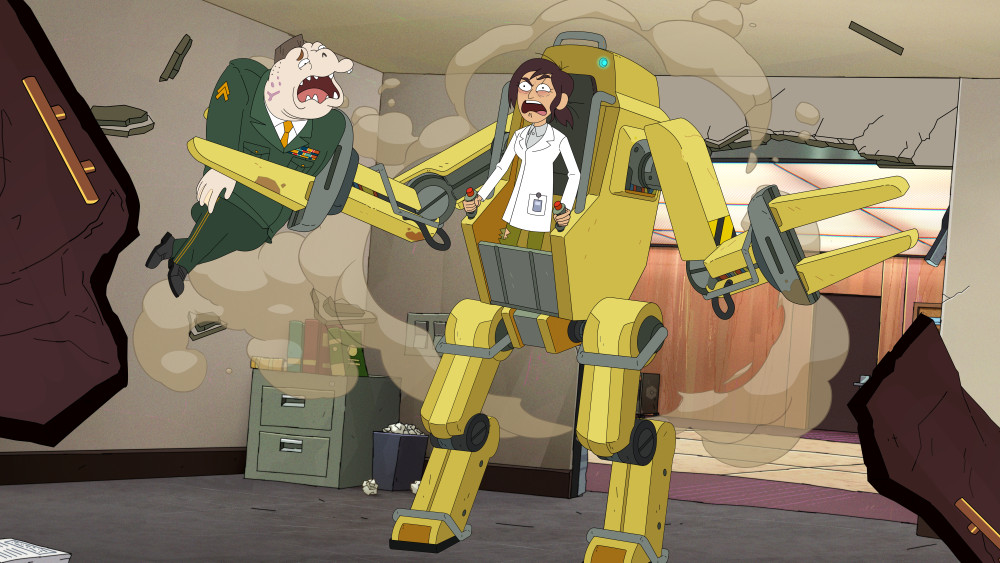 Takeuchi also gets into the spirit of the show in describing how they managed to get movie star Christian Slater on board to play the unemployed, vengeful, crazy coot father of Reagan. “We had to put a bag over his head and kidnap him into a white van,” she jokes (at least it sounds like a joke). “He never formally agreed to ‘be in animation.’ He lives in a simulation now where he thinks we’ve allowed him to continue to ‘live freely’ as an ‘actor in Hollywood’ and ‘loving father,’ but he’s just hooked up to some feeding tubes and a ketamine pump.” Still, she loves working with the actor — and purely for the record, Takeuchi denies that his character’s name, “Rand,” nor others you might have heard on the nightly news like “Reagan” and “Brett,” have any real-world significance. “I just followed my gut with what would be a really annoying name to have foisted on you by a parent you didn’t politically agree with.”

Similarly, she states that Inside Job is not a direct response to the last few years’ worth of headlines. “Conspiracy theories and the idea of secret societies and supernatural secrets go back for a long time, much earlier than the current moment,” Takeuchi says. “It’s human nature to imagine the explanation behind a mystery or to infer motives, or struggle to find hidden meaning and intention behind the random nature of the world, and the impulse to believe there’s a bigger plan when there is no plan. Inside Job’s surrealism and absurdity inoculate it from having much to do with politics as we know them.” But, she adds, “It has definitely been a trip to see the rise of conspiracy and the zeitgeist that happened during the actual making of the show.” 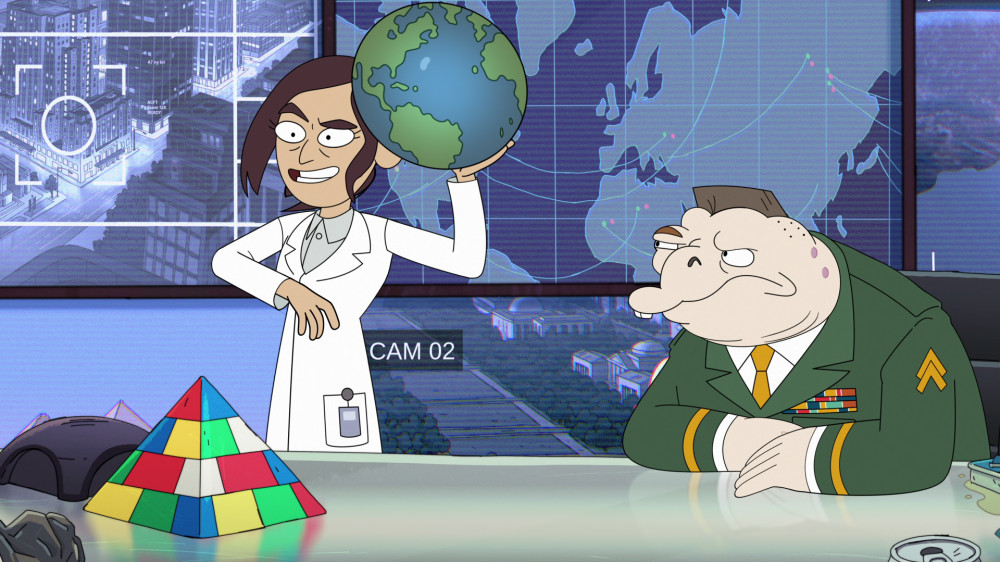 Comedy Is the Best Therapy

In fact, Takeuchi admits to using surrealism and absurdity as an escape from some of the darker corners of reality. “Comedy is a lot like therapy for me,” she says. “It’s how I process difficult emotions. There’s a lot about the current climate that we live in that’s frankly an uninterrupted onslaught of horror. There’s never been more outrage or paranoia or cynicism. But I still want to laugh and have hope and positivity and joy in the world, and I think you can have both.”

With 10 episodes of Inside Job set to launch this month, Takeuchi is also working on other projects for Netflix. “I’ve been wanting to do a daytime courtroom TV series called Molly Court where a judge and jury try cases on MDMA [commonly known as Ecstasy or Molly], but for some reason no one will take my calls.” Time will tell if that’s a joke. Meanwhile, Mike Moon has high hopes for Inside Job, “Shion and Alex [Hirsch] have created such a rich world filled with iconic characters that I think the series will be loved by animation and comedy fans everywhere.”

Takeuchi sums up the show more succinctly: “Idiots in power is a timeless concept.”

Inside Job premieres on Netflix on October 22.