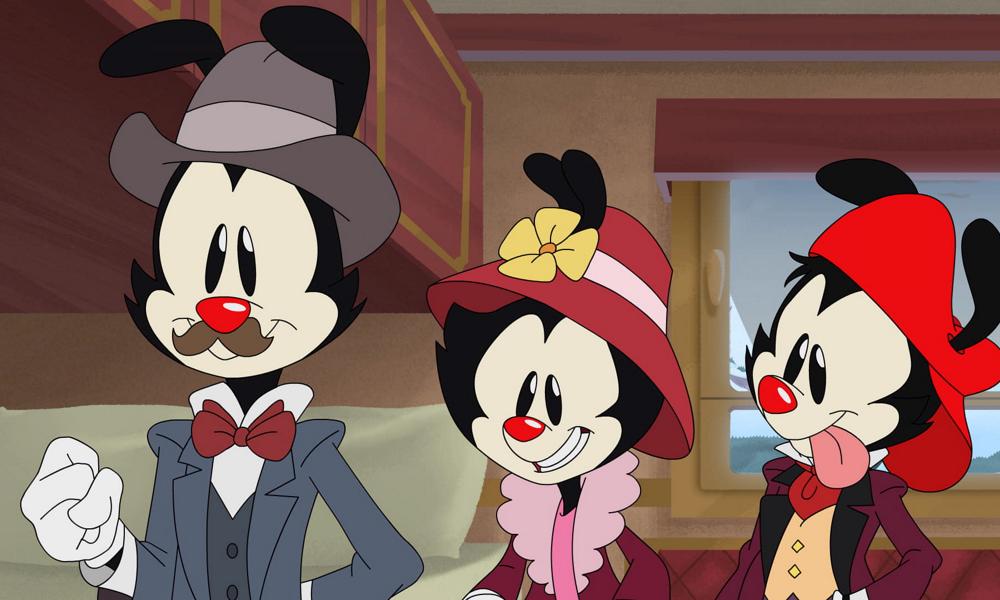 For those of us who lived through the ’90s, the popular Warner Bros. toons Animaniacs and Pinky and the Brain were two of the seminal pop culture phenoms of the decade. The good news is that show, which was created by Tom Ruegger and ran for five seasons on Fox Kids and Kids’ WB From 1993 to 1998, is being revived and rebooted on Hulu this month thanks to the team at Warner Bros. Animation. 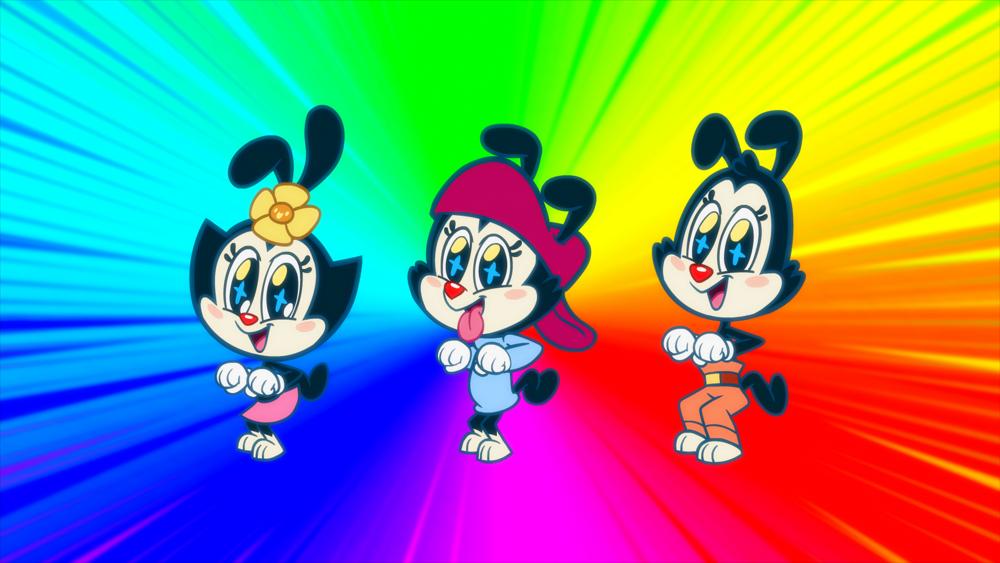 One of the revival’s biggest hat tricks is that it’s still fresh and relevant today, and the character designs and animation are remarkably faithful to the original show, while keeping up with the look and technology we expect to see in 2020. As Swarr explains, “When you see the new designs, they instantly feel familiar to the fans of the original show, but there are some big changes in how the characters are drawn. It’s kind of like the designs you remember them looking like, not so much what they actually look like.” 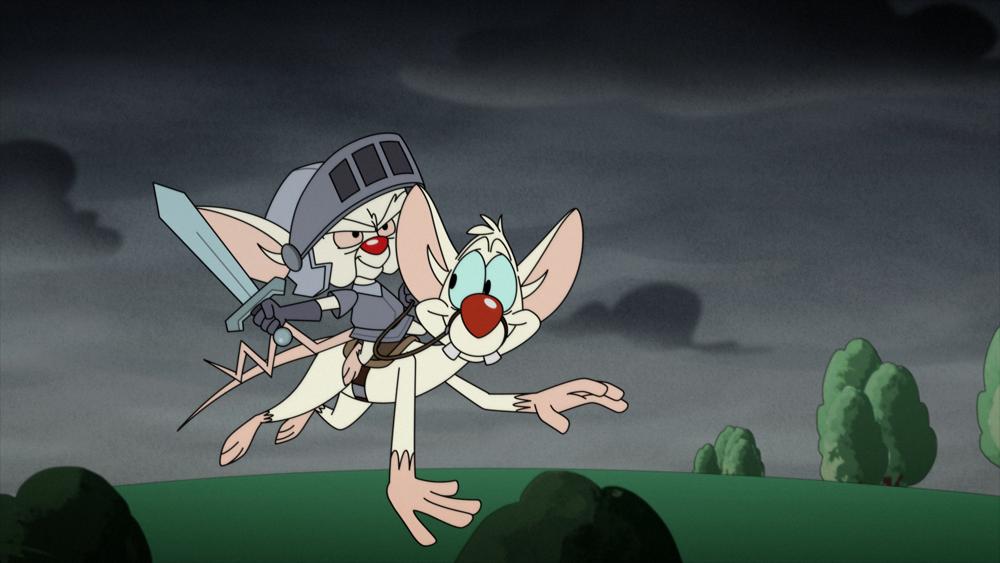 Not Your Typical Process

Wild says Spielberg and Register wanted to take the reboot in an interesting direction since most children’s and family shows are storyboard-driven, while adult animation projects have a showrunner and a co-head of animation, with a writers’ room. “They wanted to set the show up like an adult series, and I was tapped as the showrunner because of my background in shows such as Family Guy and the Ted movies,” recalls Wild. “Steven wanted a very thorough look into what I was going to shape the show as, and I was very honest about what I was going to do. So, after lots of back and forth, he ended up picking me.”

Soon after, the show found its head of animation in Swarr, who has decades of experience in TV animation. “I remember I was working at Nickelodeon at the time I was first approached,” says Swarr. “I was so worried about ruining the original show that I said no. There are some die-hard Animaniacs fans out there, and they have such hardcore ideas of the what the show was, that I hesitated. But then after meeting with Wellesley at Amblin in late 2017, we hit it off and realized that we had the same idea for the show.” 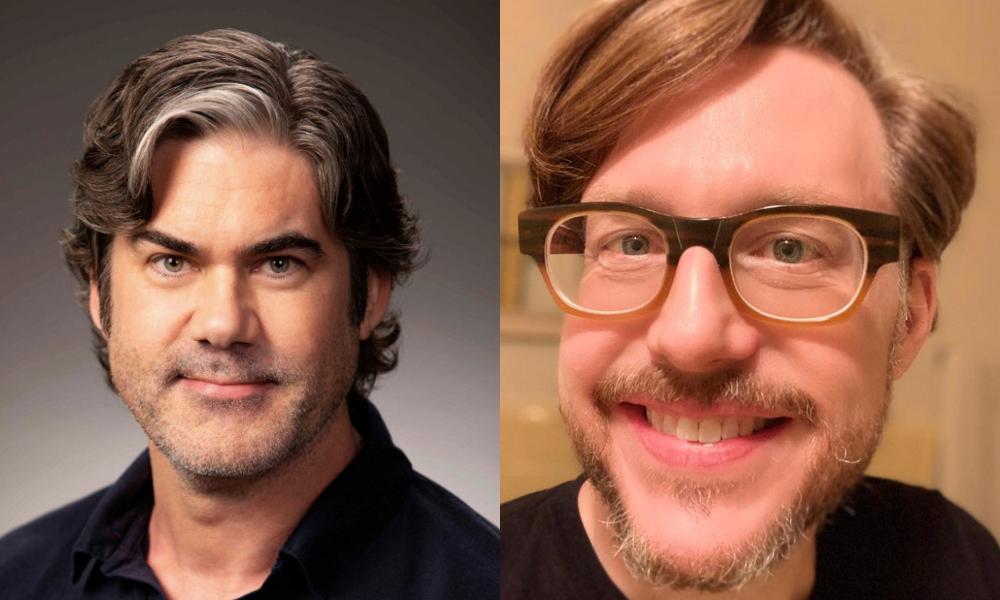 Both the producers admit that working with someone as iconic as Spielberg on such a popular franchise was a bit daunting at first. “You have to put yourself on the spot,” says Wild. “Steven has very specific ideas about what he wants in all of his projects, and Gabe and I were there to meet those specific needs. Neither Gabe or I are schmoozy types, so we just went in as ourselves and said, ‘This is what we do!’”

Swarr says he and his team had a very broad approach at first. “We presented Steven with a bunch of different looks and gradually narrowed it down to find out what he was looking for,” says the animation director. “The trick was, how to modernize it without departing too much from the original? The big thing was cracking that code.” Wild adds, “The goal was to take the best DNA from the original and plus-ing it by using the latest developments in animation technology to bring the property up to the 21st century.” 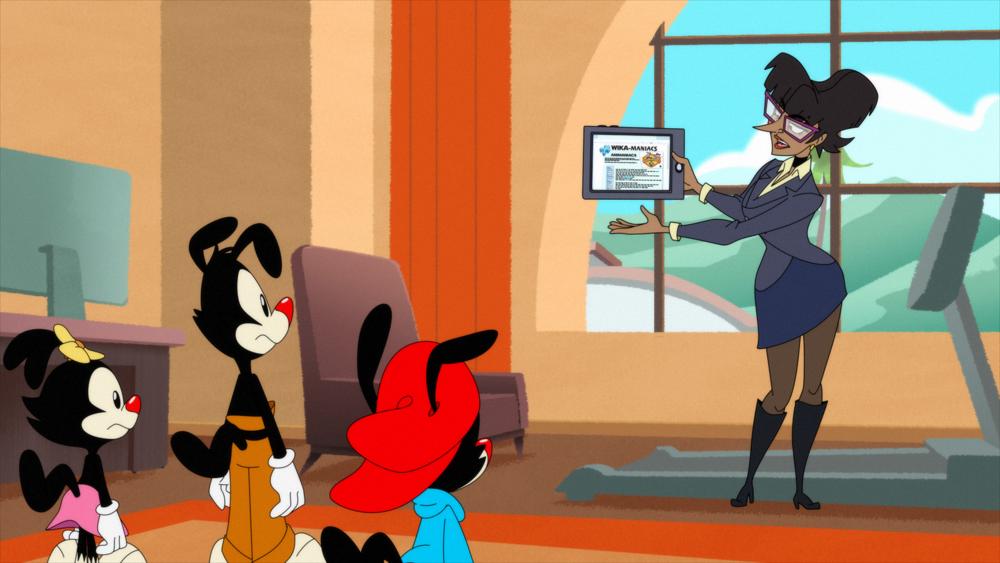 As expected from a perfectionist auteur like Spielberg, the two-time Oscar-winning director was very involved at every step of the show’s production. “He looks at everything … every outline, pitch, script, animatic, design,” says Wild. “My initial outlines and scripts were the ones that went through the gauntlet, so it was a little bit of a learning curve. Soon, trust was developed, and we got to a place where he said he was going to pull back.”

Swarr adds, “He is a filmmaker and not animator, so he has a live-action approach to animation. I had to be very specific about what we could do and couldn’t. I had to reboard the first eight episodes to make sure we got what he wanted. We showed him the first episode last year, and he told us that he thought we had a very strong start.” 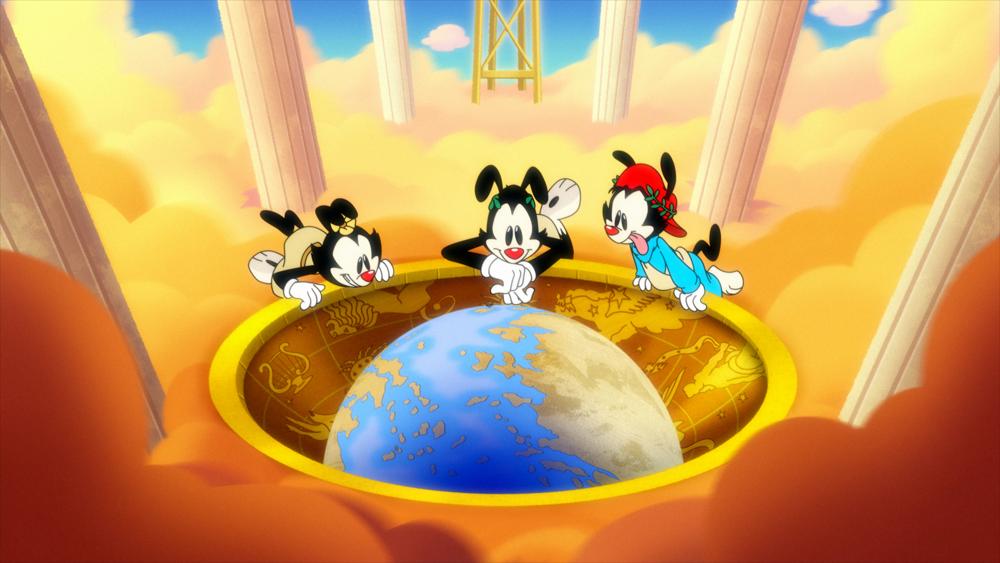 The showrunner and his team tried very hard to hit the ground running from that very first episode. “We wanted to let the fans know from the very first lines that came out of the Warners’ mouths that this is the show that they’ve been waiting for and wanted almost 20 years after the original aired on TV in 1993. We wanted fans to know immediately that we wanted to retain the nostalgia, the meta humor and social commentary, and that we were continuing that tradition by making fun of reboots in that first episode. That self-awareness is the trademark of the original show.”

Of course, one of the big challenges of the show is to remain topical while serving up unexpected storylines, great slapstick humor and showcasing hilarious songs that stay with the audience long after they’ve seen the show. “It’s hard to believe, but we wrote the first episode about two years before it’s airing,” says Swarr. Wild adds, “It’s really hard to be timely and topical since we send our show overseas and it takes about 12 months to make an episode. We had the same situation with Family Guy.”

What Wild and his writers did was take a look at the calendar and see what was coming up in 2020-2021. They had no way of predicting the surreal turns the world took this year, but they were able to pin down election-year humor. “Some of those events, like the Olympics, were derailed by the coronavirus. Occasionally, we can also sneak in something toward the end of the development process, and we can dub a line or two about four months before the show airs. So that all helps.” 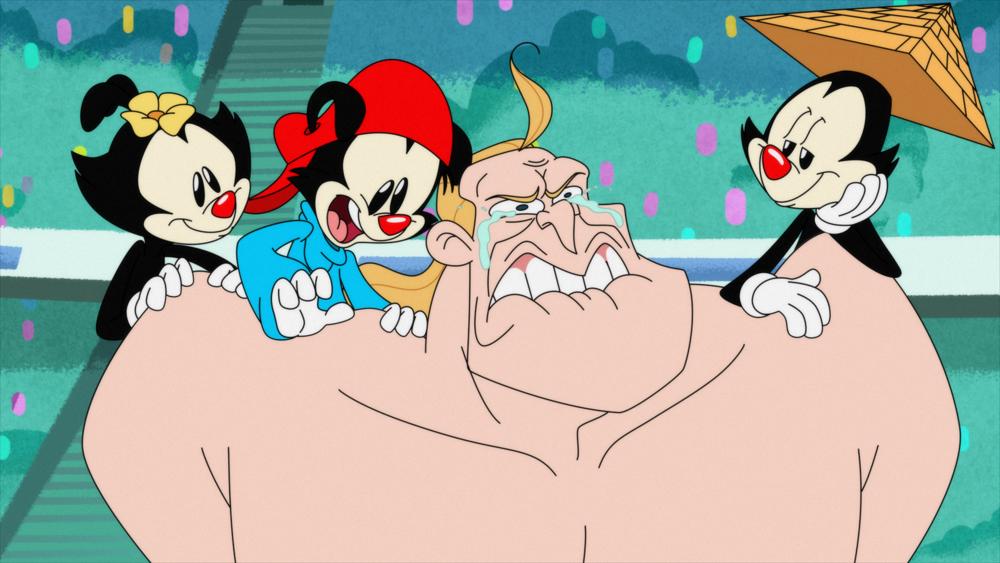 Both Wild and Swarr say they love the way the show continues to maintain its anti-authoritarian voice. “Smartasses are always funny,” says Swarr. “That counterculture voice always feels young and fresh. The show has Marx Brothers’ comedies in its DNA. That’s what Steven was drawn to.”

The producers also believe that this 2020 version of Animaniacs is the perfect antidote to our cynical, troubled times. “There is something inherently funny about baloney in your pants or genetically altered mice taking over the world, especially during these troubled, polarizing times. What better time to deliver jabs to the establishment?”

Wild says the show’s music and its catchy songs continue to be a huge part of the equation. “There is one episode that you will see in about a month and a half, and I’m not going to spoil anything for you, but I really love one of the songs, because it has a great mix of warm comedy and a plot about an alien trying to destroy Earth. I just think it all worked out really well, and the voiceover work is really wonderful.” 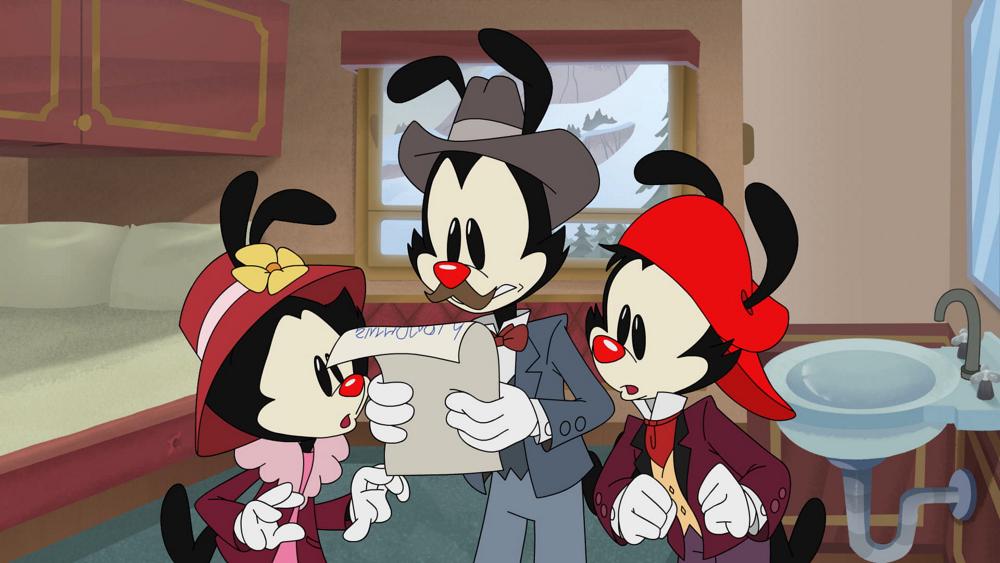 “I like to think of Animaniacs as the heir of Looney Tunes,” adds Wild. “The slapstick, the self-aware comedy and the hand-drawn feeling are all part of the staying power of the show. Gabe and his team of animators work so hard to make it feel fresh and new, and we feel like we’re being taken back to the old days of the Warner Bros. cartoons.”

“The thing that I like is the diversity of the looks,” says Swarr. “You have these segments with Pinky and the Brain or the Warners, and the animation is done so well that they really feel like real characters. You don’t see that very often in small-screen projects, because you don’t have as much time to produce the animation as you do in features.”

Both the producers hope a new generation of fans will fall for the mad antics of Yakko, Wakko and Dot (and Pinky and the Brain, too). “We hope we can capture that lightning in the bottle again and recreate the feeling the original audience felt when they watched the show in the ’90s,” concludes Wild. “I hope they will have fun and be surprised,” adds Swarr. “I hope we keep them guessing and that they are always surprised but what comes next!”

The all-new Animaniacs premieres on Hulu with 13 episodes on Friday, November 20.