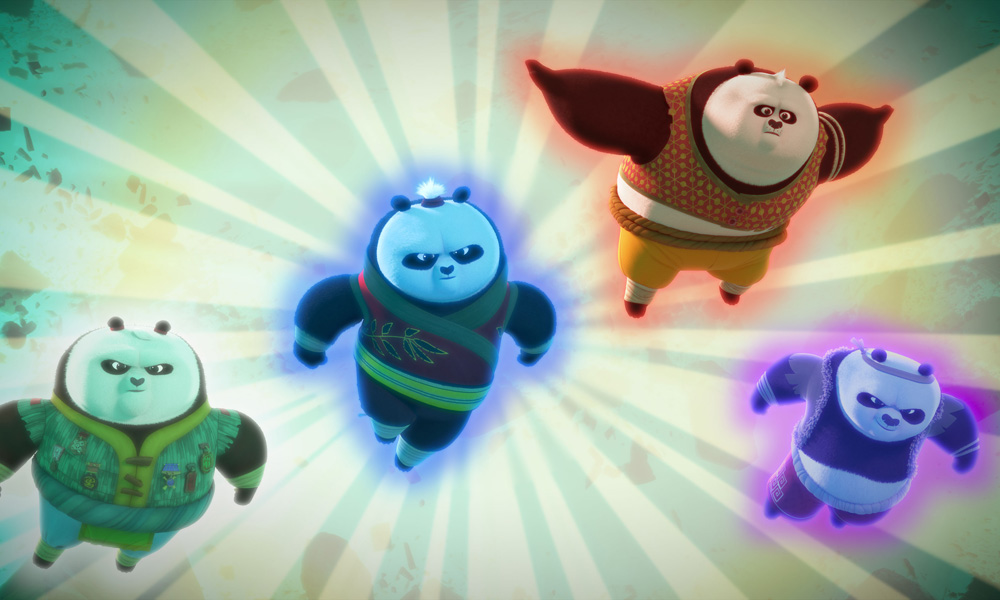 When Po, the beloved hero of the three Kung Fu Panda films, bumbled through three hilarious big screen stories, he took a generation of kids with him as he battled various forces of evil, saved his friends and finally became a master of chi. Now, a new generation of fans will meet the sage yet butterfingered panda as he becomes available for binge watching in the new DreamWorks Animation series Kung Fu Panda: The Paws of Destiny — streaming now on Amazon Prime.

The show follows Po and his four young apprentice pandas as they learn to master their kung fu skills. Executive producers Mitch Watson, Elliott Owen and Lane Lueras, who was a storyboard artist on Kung Fu Panda: Legends of Awesomeness, wanted to give the work its own signature while still preserving the feeling of theatrical experience. They started developing the show in September of 2015 and began production 15 months later.

“We spent a lot of time figuring out how make it look as good as possible, and I think people will probably be pretty impressed,” says Owen, who helped develop the show at DreamWorks Animation Television. “I think the good thing about what we’re doing is that we’re setting it in Panda Village, which was introduced in the third movie, and we’re bringing in some new characters. So, it’s almost like we’re opening up this new little pocket in the Kung Fu Panda universe. We’re focused on these new, young panda characters that are slightly like Po was when he was younger at the beginning of the first movie.” 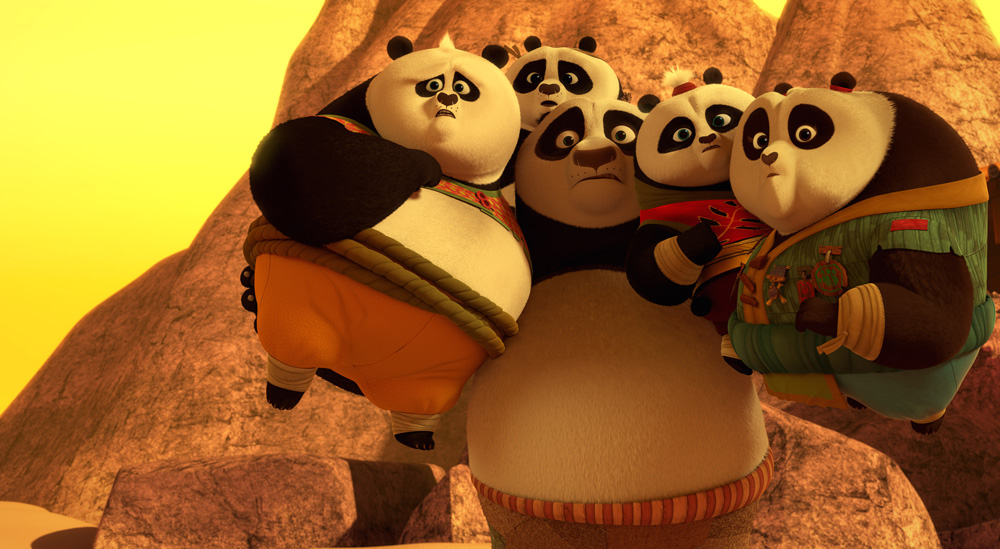 This new direction also seemed to work with the overall storyline established for Po in theaters. It was time for the student to take the next step in his journey.

The Student Is the Master

“In martial arts, the highest form of being a master is that you go and teach what you know to somebody else,” says Watson, who is also showrunner on the project. “So, you can see Po, who is still a kid at heart, training these kids and trying to keep them from falling into the same pitfalls he fell into as a kid. It’s rounding out the universe and almost taking Po and these new characters along for a new ride.”

With multiple new characters in the mix, and a TV budget and timeline to consider, this team had to develop a way to hit a high mark in the look of the show. The show is almost entirely 3D CG with about 30 to 45 seconds of 2D CG per episode most of the time. They soon found a mix of old school film techniques and intense development process that worked for them. 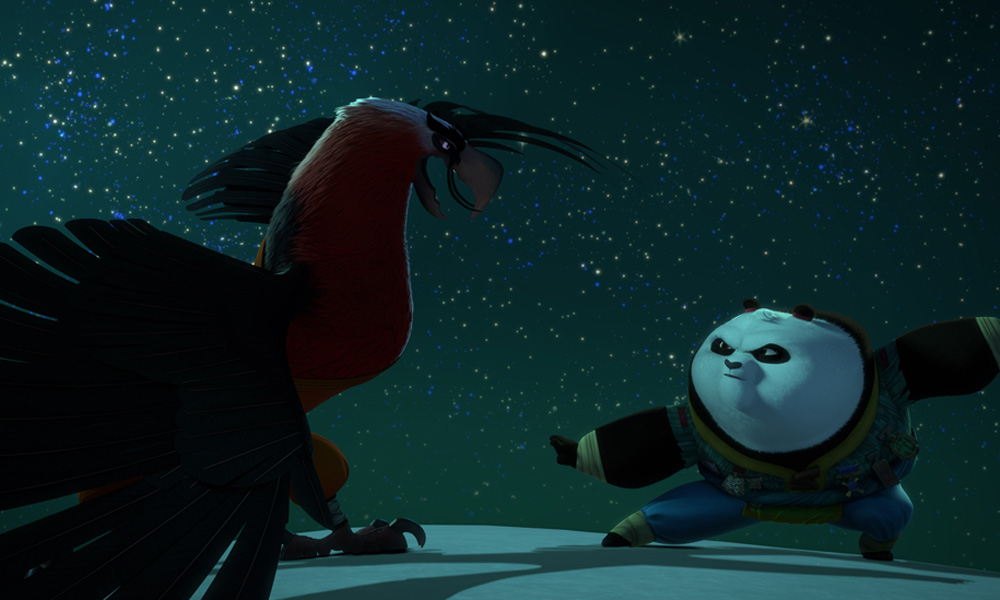 “We don’t have years and years and years to develop a look or do storyboards, but I think it boils down to how good we all wanted it to look — because we weren’t going to settle for anything that looked like it was less than the feature,” says Watson, a veteran of the Beware the Batman TV series. “If you look at these shows, I think they’re really on par with the features. Once the scripts were done and the storyboards were done, we’d look at it in the animatics stage. We decided early on at the animatics stage we would at least do two or three more passes there. So, Lane and Elliott and I gave each other the option that we would cut out anything that we didn’t like if it wasn’t playing. And then we’d rewrite and re-board it. Sometimes it would be very minimal and sometimes we would take as much as seven bits out of a show. That’s a lot for a 22-minute show, but we did that because we knew that our chances of making changes once it came back from animation were minimal. At every step of the way we were trying to make something that was a cut above what had been done before. We didn’t want to settle.”

During that process they worked with a crew of about 50 people who were spread out over DreamWorks offices in Glendale and at other facilities in Canada and India. Soon their own style for the series started to emerge.

“When it comes back from animation, that’s it,” says Owen, who also worked on the All Hail King Julien Netflix series. “There’s probably not time to change much. We really tried to get a sort of feature feel and look to everything. Our color palette was definitely very similar to the movies. Sometimes we did a snappier animation because it seemed more fun, but for the most part I think the animation adheres to the movie. So, it’s a kind of hybrid of the movie and what we did.” 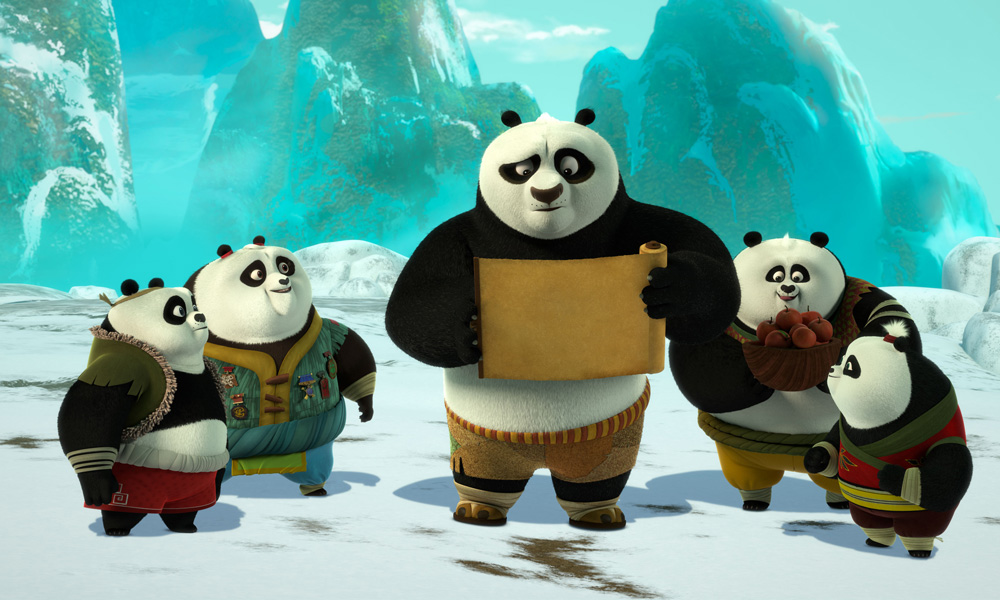 Owen points out that the series allowed them to explore storylines and characters way beyond the 90-minute feature format. “We were inspired by Tarantino’s serialized approach to storytelling and by Breaking Bad, in the way that you could look at characters over time and not have things be like a ‘villain of the week’ or an ‘I forgot my homework’ story each week. So, every episode is not a cliffhanger. It should be just a fun ride.”

Tools of the Panda Trade

The series is made with Maya, V-Ray, Mari, Nuke and Houdini. There are custom DreamWorks tools like the Shot-Light Tool, FX Scene Builder, Character and Prop Auto-Rigger and Cache Tool in the mix. Watson says they also leaned on techniques that had been developed decades ago to meet the constraints of time and money. Without the computing power afforded a feature, this was often the only way to make things come together.

“We came up with a way of using matte paintings and staging the things in a very specific way so that we could get away with it,” says Watson. “That, for me, is kind of the fun of working with these constraints. You have to go back to these old school techniques and tricks that they did in the 1940s and 1930s because we just can’t afford to do it the way they would do it on a feature. There isn’t time or money to build all of that in CG. And it’s very satisfying when something like this works.”

The team also wanted their team to collaborate as much as possible. “We had a staff of six writers and a writer’s assistant who also wrote, which is just luxurious to me,” says Owen. “The nice thing about having a staff of writers in house is that they can take ownership and talk with the edit team when it’s time to work on their episode, and then everyone is just so much more invested once they’ve taken ownership. We work under the assumption that whatever works goes in. We’ve just never been that precious about things. So, if a P.A. pitches a line and it works, it goes in. If an animator pitches something that works, it goes in. I just want to give them more than they’re expecting when they show up, so they want to see more.” 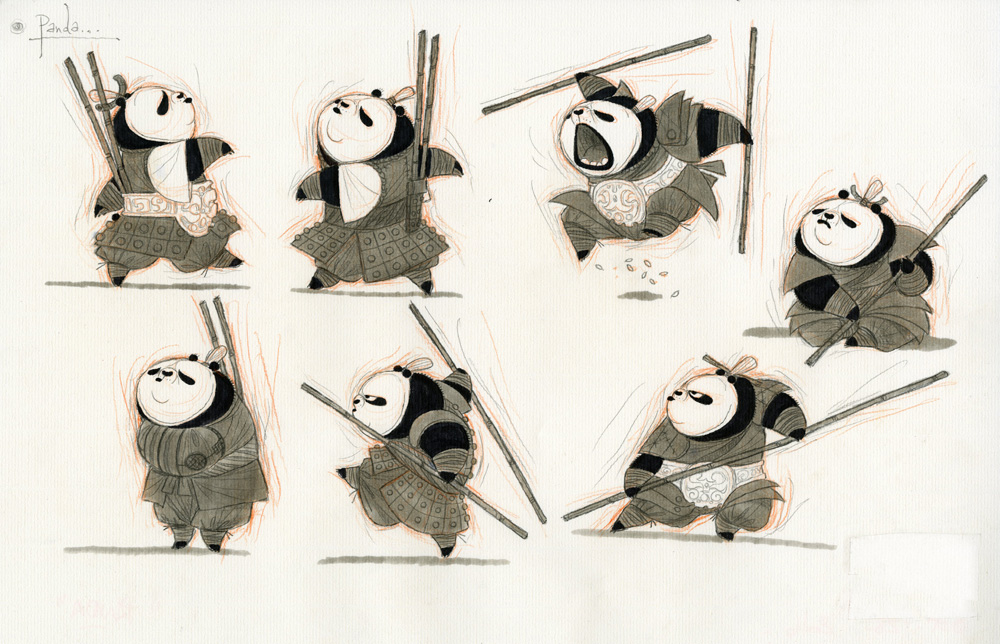 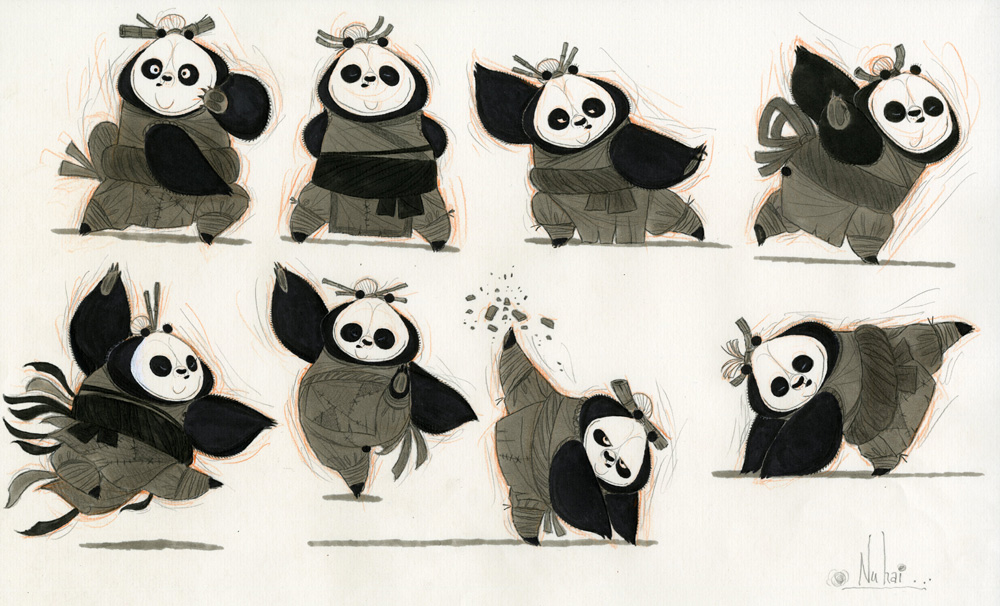 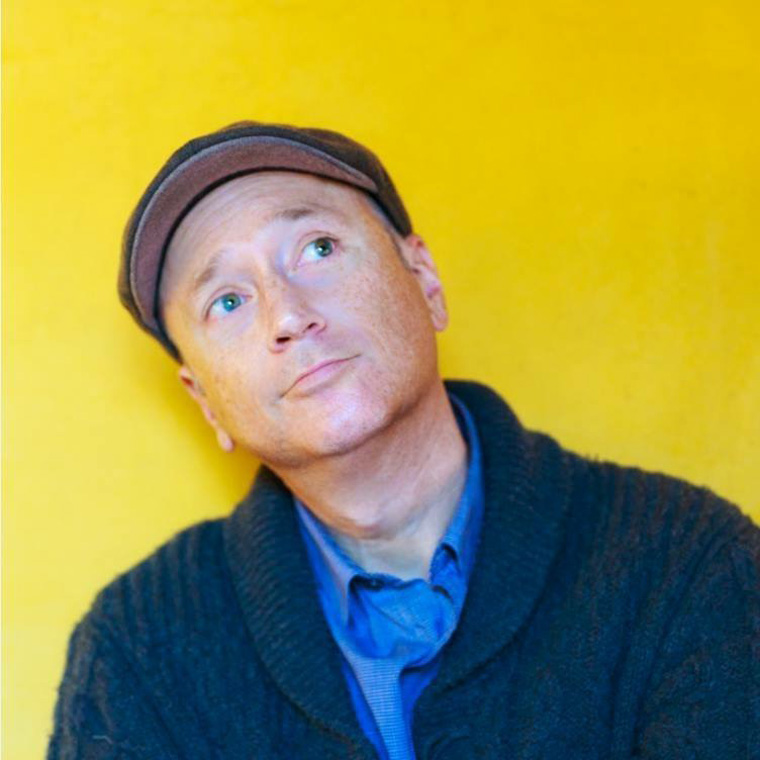 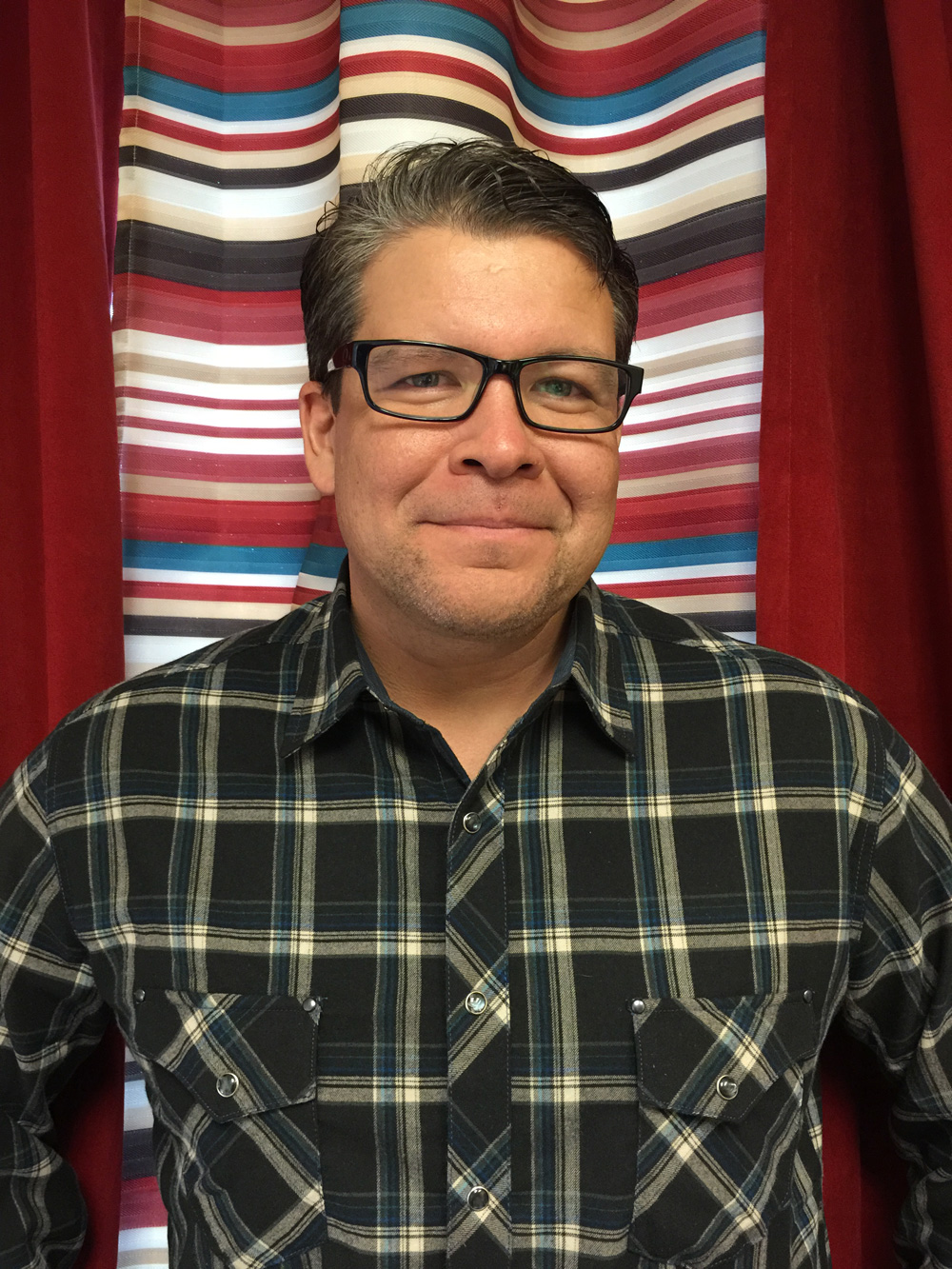 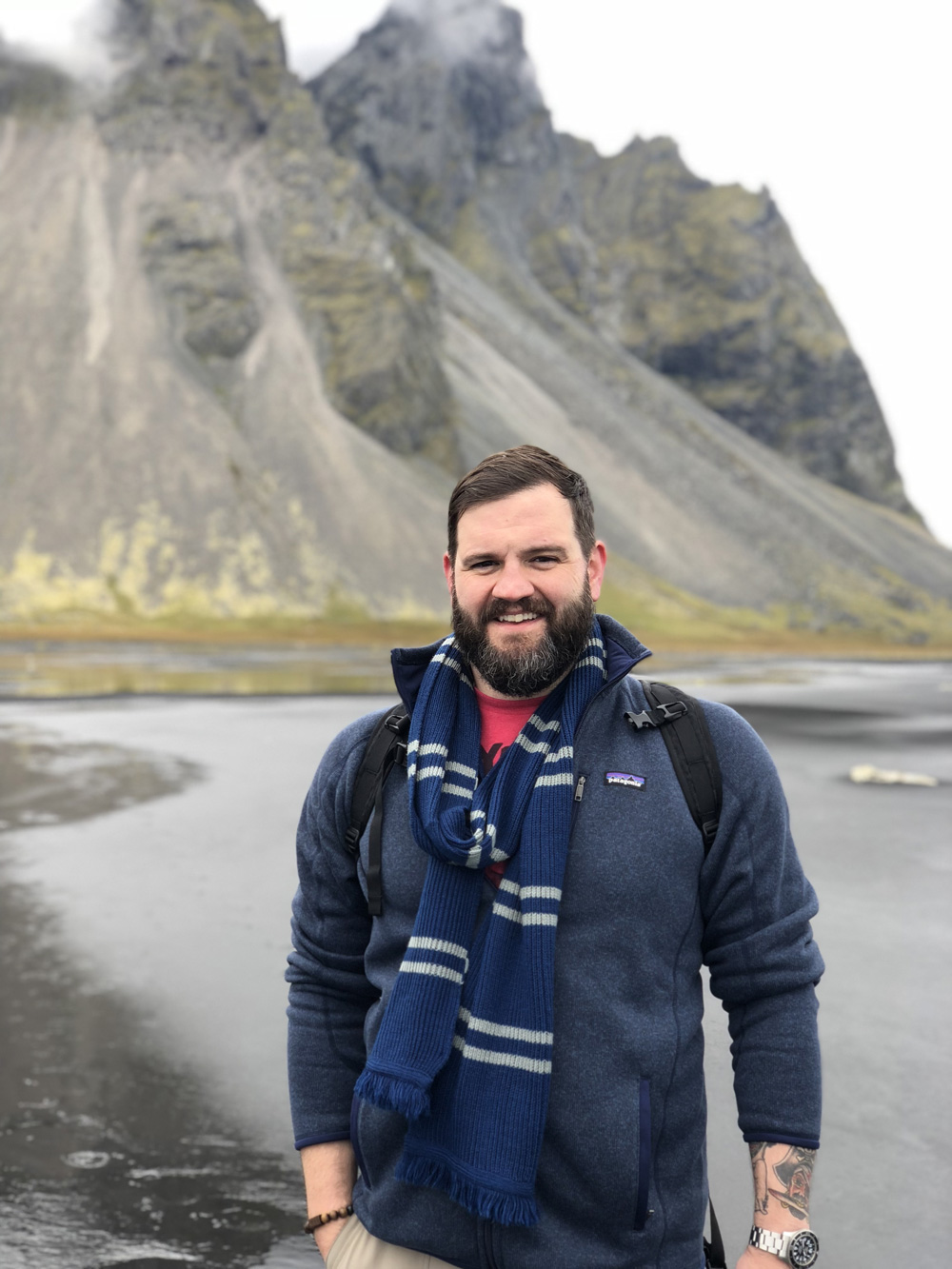