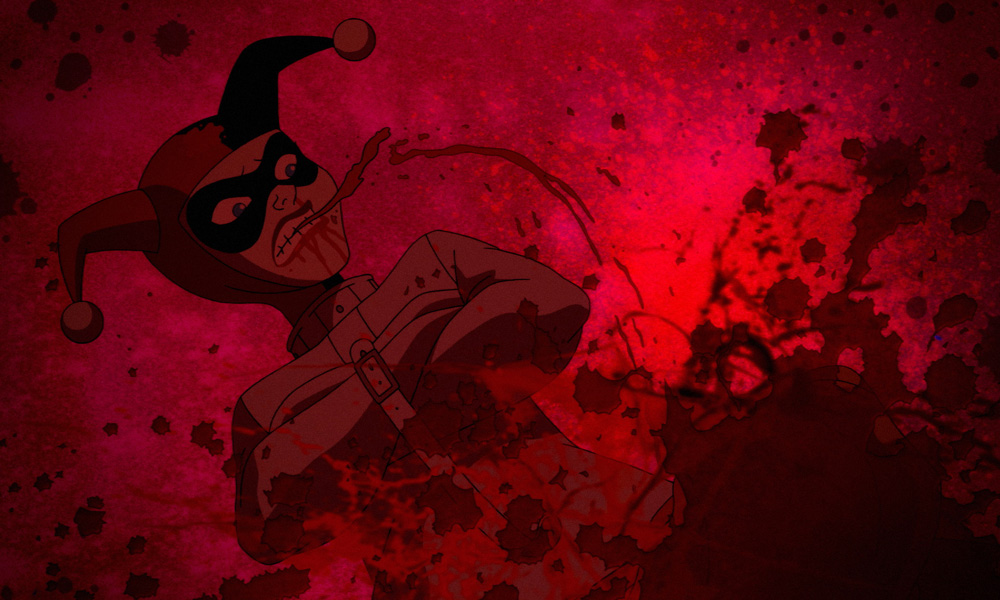 Over the last two decades, DC Comics’ super-villainess Harley Quinn has blown up the box office, kicked ass in comic books and made an indelible mark on pop culture (she was #15 in most-searched-for costumes for Halloween this year according to Google, above “vampire” and, more poignantly, “Joker”). Now DC’s resident psychologist-turned-psycho is returning to the place where it all began: television. Or, more accurately, web TV, with a new eponymous series on DC Universe in which Harley’s as likely to be seen having heart-to-hearts with Poison Ivy as slamming one of Joker’s henchman through the knee with a baseball bat — all while dropping plenty of F-bombs. Because not only is this version of Harley Quinn hilarious, touching and irreverent, it’s also R-rated.

“The studio called us and literally just said, ‘Do you have any interest in doing an R-rated, adult animated Harley Quinn show?’ To which, you know, we couldn’t say yes quickly enough,” says Patrick Schumacker, who wrote and executive produced the series alongside Justin Halpern and Dean Lorey. The cast, which includes Big Bang Theory‘s Kaley Cuoco in the title role alongside Alan Tudyk as The Joker and Lake Bell’s Ivy, were equally enthusiastic. “It was a no-brainer,” says Cuoco, of the opportunity to play Harley. “Who doesn’t want to voice one of the most iconic, badass, edgy female characters we need today?”

Having first appeared in Bruce Timm’s Batman: The Animated Series 27 years ago and quickly emerging as a fan-favorite, today there are an overwhelming number of Harley iterations to draw from. For producer Jennifer Coyle, however, the original series was the obvious starting point. “For me, there’s only one Harley Quinn, and it’s from Batman Animated,” says Coyle, although she adds that this latest incarnation of Harley shares “DNA” with Amanda Conner and Jimmy Palmiotti’s comic-book version, while Schumacker also cites DC’s New 52 and Mad Love as touchstones.

“We took a nod from [Conner’s] design style,” Coyle explains. “And we took a nod from the original series, and then we took a bit of the Suicide Squad version of Harley with the pink and the blue hair.” As for Cuoco, with Harley having been voiced by a carousel of cherished actors such as Arleen Sorkin and Tara Strong, she decided to focus on putting her own spin on the character rather than mimicking anyone else’s. “Harley’s iconic enough,” Cuoco says. “Also, my voice is extremely recognizable so I didn’t want to try a voice that sounded fake and put on.” 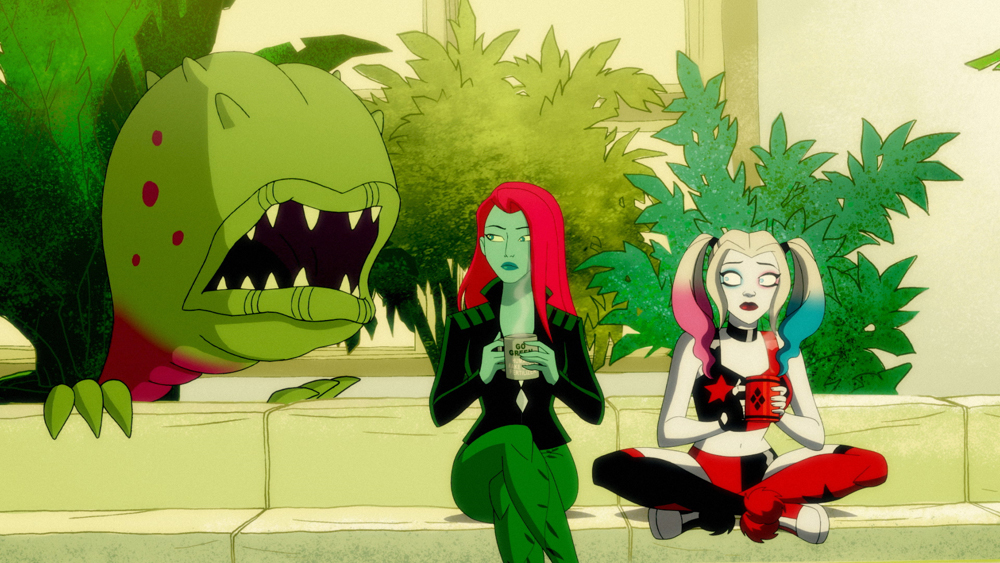 Character designer Shane Glines, who trained under Timm at Warner Bros. was tasked with integrating all the different animated inspirations “and coming up with something that works as perfectly as she does,” Coyle says.

While creating a coherent version of Harley was a challenge, so was balancing the character’s sensuality. “That was a big concern, because this show is really about her evolution as a woman and over-sexualizing the characters could be the opposite of that,” Coyle acknowledges. “I mean, we wanted to be loyal to the characters — like, the woman is wearing vinyl underwear [in Conner’s comic-book version] — but having said that, we took pains to not make her overly sexualized.” Not only did that extend to Harley’s appearance — of all the characters she went through the most design iterations — but also her body language. “She slouches,” says Coyle. “And she never does this doll pose where she’s looking vacant and her toes are pointed together like you see a lot in anime shows. We were on a constant lookout to make her not too girly-girl and more just like a real, adult — psychotic — woman.” 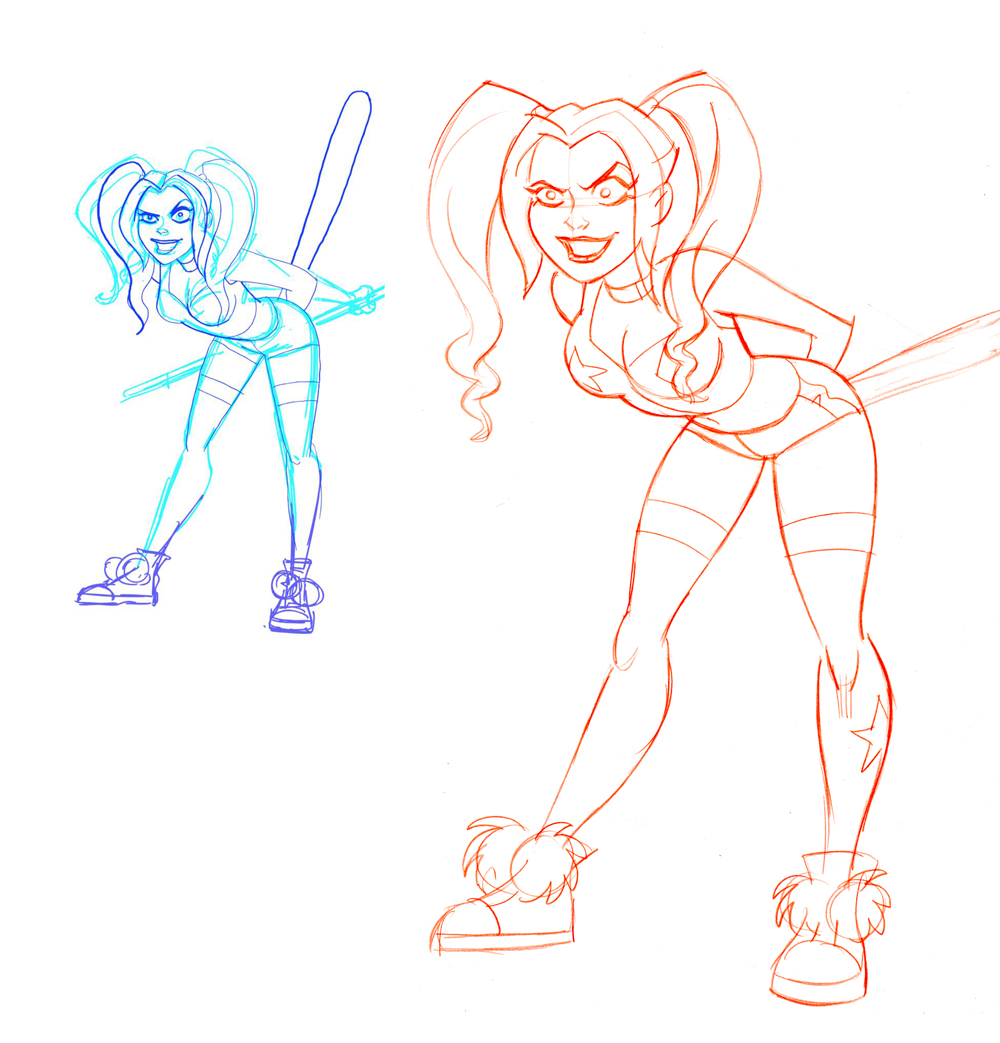 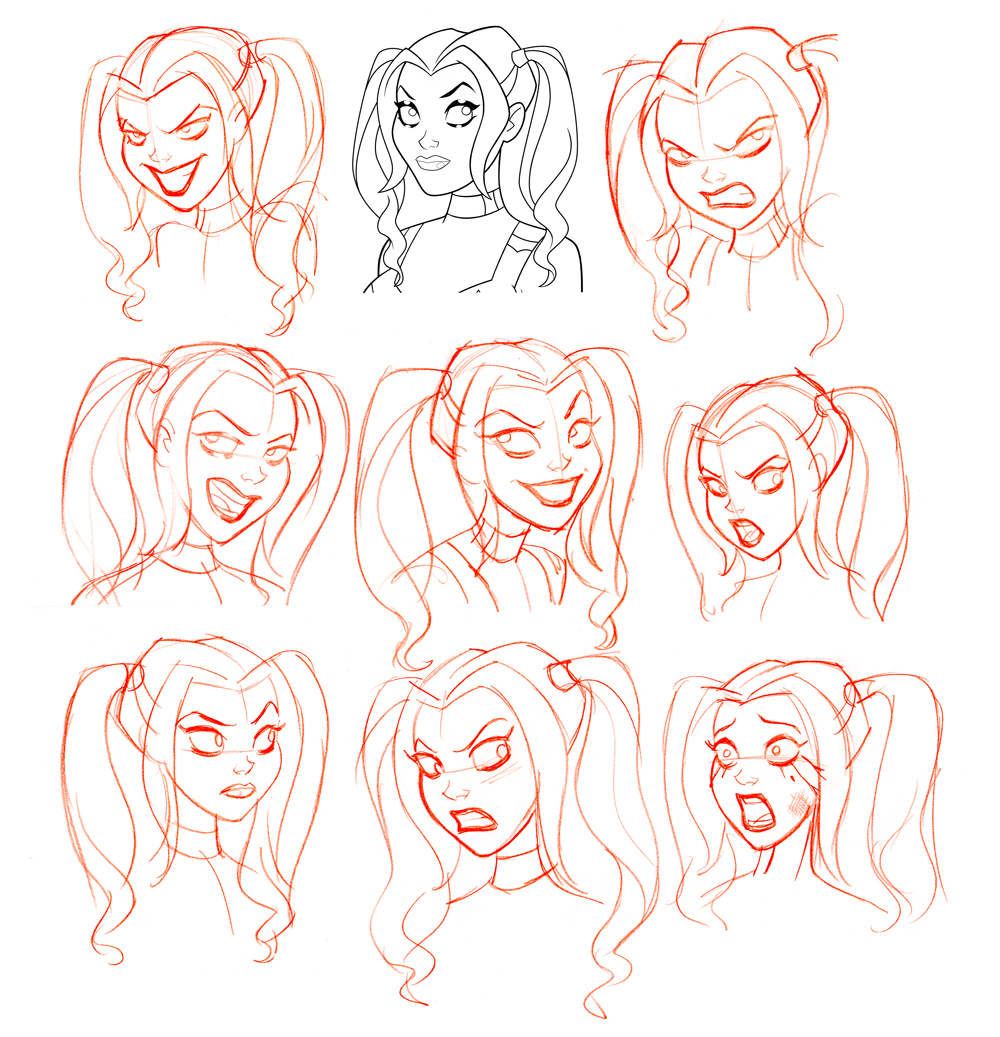 That much is evident in the narrative, which follows Harley’s emotional development as she extricates herself from an abusive relationship with Joker and regains her self-esteem. “We did want it to be emotionally grounded,” says Halpern. “That was really important for us throughout the show, [because] if it didn’t have any emotional grounding to it, if you didn’t care about what Harley cared about, then it’s just a lot of people saying ‘f***’ and a lot of blood.”

Meanwhile, her bond with Ivy acts as the linchpin of the series. “It is about a female relationship at its core but with a lot of testosterone in there as well,” says Bell. The show neatly zips between poignancy, comedy and senseless violence, with any emotional development punctuated by plenty of gore and meta quips (“Women aren’t funny,” Joker complains in one scene, before shooting a henchman through the chest). 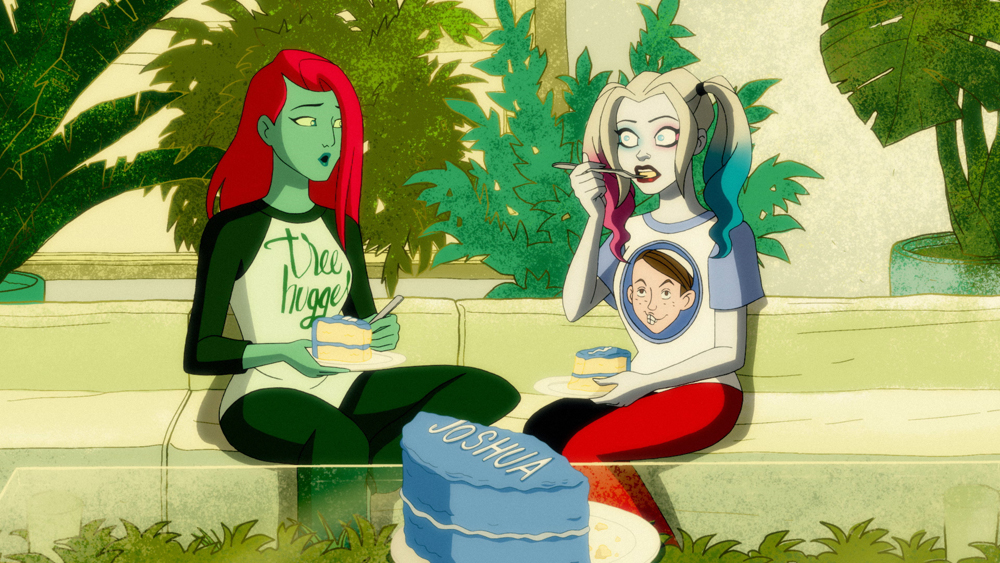 “There’s a naughtiness and kind of an aggressiveness to some of the storylines that I feel like are often held for male characters,” says Bell. “And I think that that part of it, getting to do wildly expansive and violent and aggressive heist and action sequences, is really refreshing. The people who are driving that hard comedy but then hard action are the female characters.” As well as the female-led cast, the crew included a number of women in the writing room as well as on the production team, with Coyle once again working alongside supervising director Cecilia Aranovic.

“When we pitched the show way back in 2016, we talked about it as like a female version of Ferris Bueller,” says Halpern, envisioning Harley as Ferris and Ivy as Cameron Frye. “There is that sort of classic two-hander buddy comedy.” Halpern, Schumacker and Lorey also cite Rick and Morty, Archer and Arrested Development (on which Lorey was a producer) as comedic influences. “It just runs the absolute emotional gamut, from super happy to super violent to super angry to super broken-hearted,” says Coyle of the series. Cuoco agrees: “It’s edgy, outrageous, aggressive and hilarious, but completely grounded at the same time.” 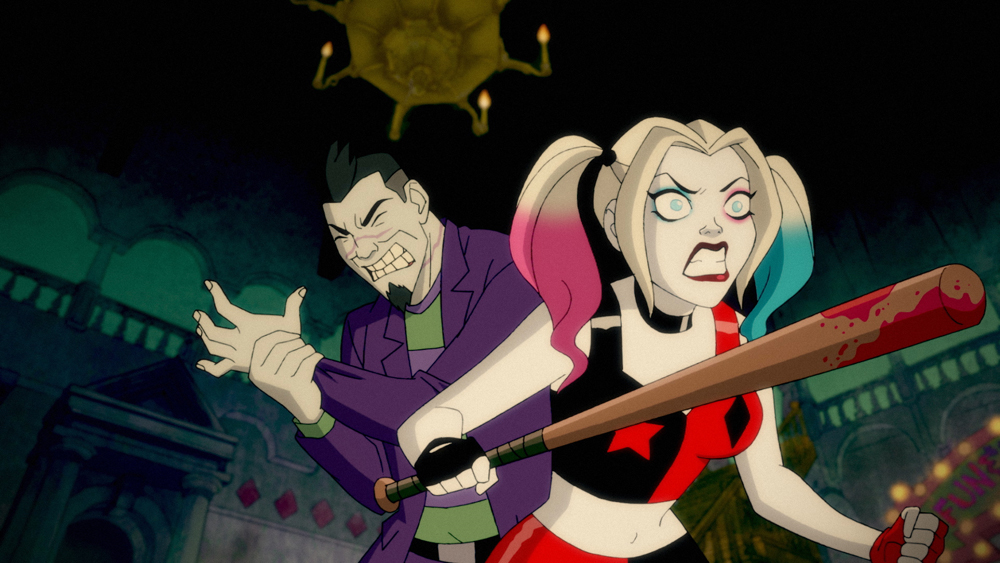 Much of that comedy is driven by the distinctly R-rated humor, which, in addition to graphic violence, includes a ton of f***s. “There was remarkably little pushback from the studio,” says Lorey. “We were kind of amazed that they were as willing to go with it as they were. There were very, very few things that they actually pushed back on, although, after a point we did hear a little bit about tonnage. We were very ‘f****’. We cut back a little bit.” In fact, after the writers managed to cram 22 F-bombs into the pilot, the studio instituted a cap of eight to nine per episode. “I’d get emails saying, ‘Did anybody do a f*** count on episode 20?'” laughs Coyle.

“We’ve pared back,” says Schumacker. “But I don’t think it really loses anything. If you’re looking for foul language, this is the show for you!”

The team also took obvious delight in being able to poke fun at DC’s flagship superheroes, including Batman and Superman. “[The studio] has been great in the sense that, really, they gave us carte blanche to use any of their characters,” says Lorey. “I mean, we’ll see as the series goes along, there’s pretty much no giant character, hero or villain, that’s untouched by the show.” There was, however, a limit to just how much ragging studio execs were prepared to see some of those characters endure. “I think Batman for certain they are very protective of,” says Coyle. “We did pitch one board where Batman — I think they taped a sign to his back that said, ‘I f*** bats,’ and DC was like — [in fact] I think it wasn’t even DC. I don’t think it even got to that. The [show] executives were like, ‘Absolutely not. You can’t do that to Batman.’ So there are lines.” 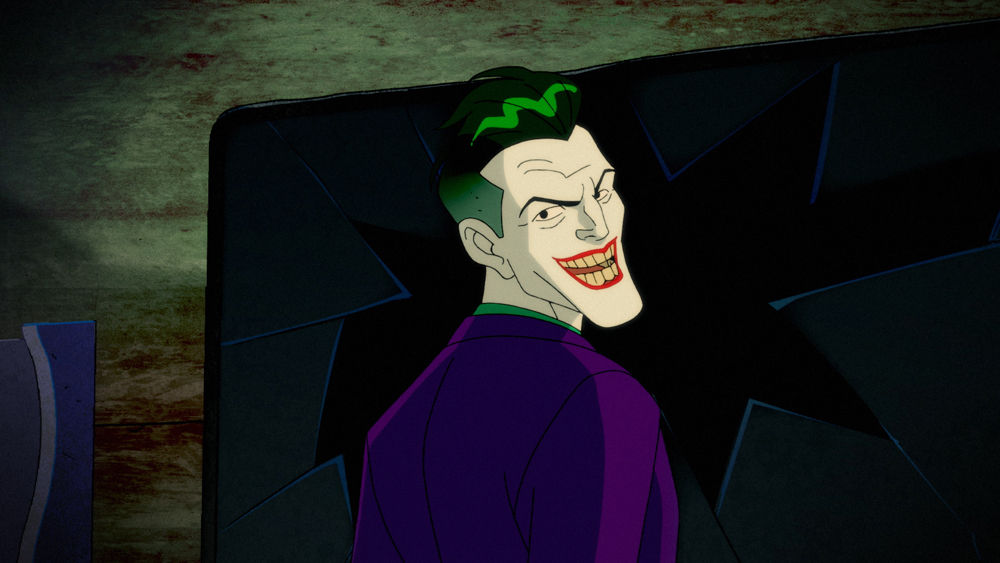 With Harley taking frequent pops at some of DC’s most beloved characters in addition to maiming and killing Gotham’s goons, another challenge was keeping the audience on-side. “That came up a lot, especially at the beginning. We were all very concerned that too much violence would make her — that people would not like her anymore,” Coyle admits. They mitigated that in part by ensuring Harley sticks to killing universally despised characters such as bankers and henchmen. And even there the writers tempered some of the more extreme violence, including one idea which involved Harley tearing off someone’s head and hitting someone else with the spinal cord. “So we didn’t we didn’t end up going with that,” Coyle deadpans. “And I think that was a wise decision at the end, because overall she is quite a sympathetic character.” 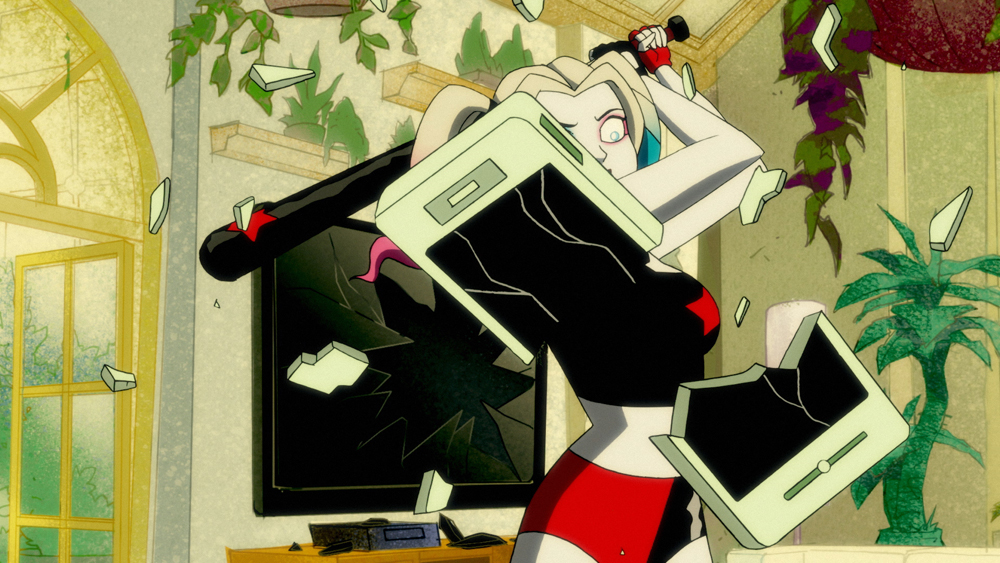 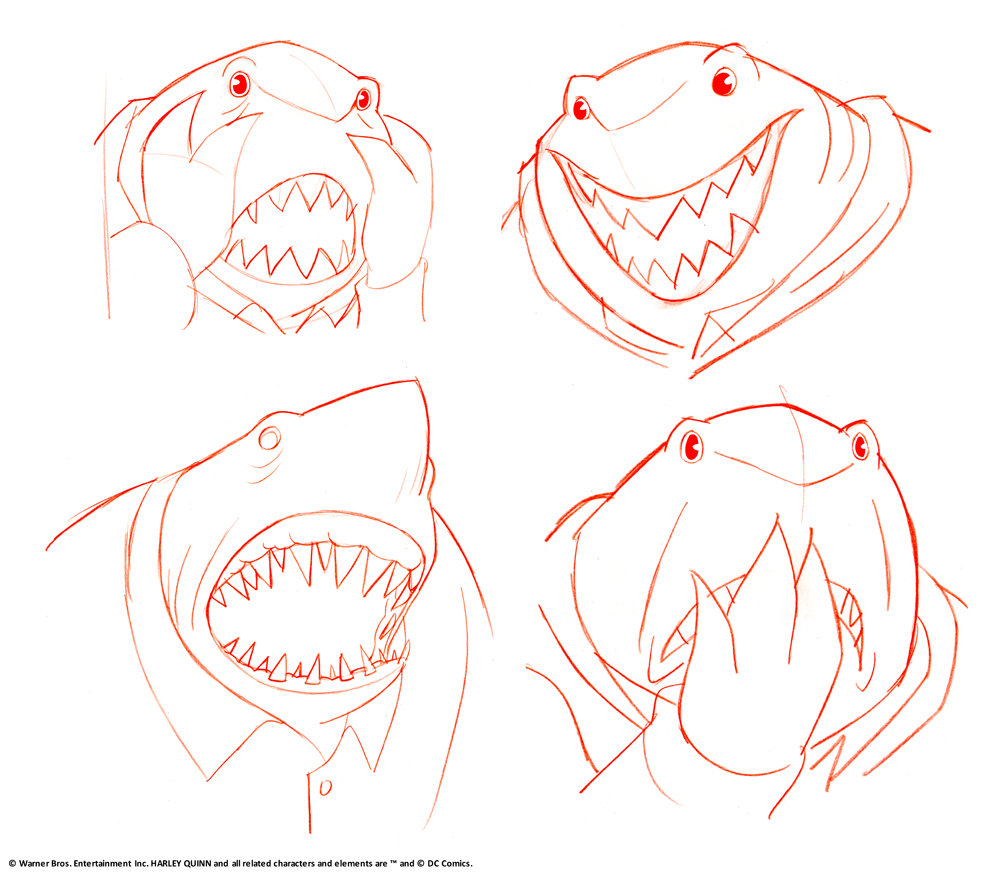 The team also built in empathy by ensuring viewers see the world through Harley’s eyes, for example by toning down the traditional heroes’ color palettes. “Their clothing is a little bit more muted, their colors are a little bit darker because they are the dull ones,” Coyle explains. “Harley doesn’t think they’re cool at all. They’re not ‘sparkle people’ to her.” Elsewhere Gotham’s colors pop a little brighter than they have in previous iterations of the city. “And things are a little bit more extreme and wild than you might have seen before,” adds Lorey. “And that was sort of true of the gore. If it’s from Harley’s point of view, she revels in all that kind of stuff, so we wanted to lean into that.”

On top of balancing the action, “hyper-real” violence, snappy dialogue, comedy and heart, the animators (some of whom were based in Korea) managed to deliver almost all 26 episodes in the space of 24 months. With each episode taking almost a year to produce, the team worked across multiple episodes simultaneously. “It was an incredibly demanding show for animators. Like really, really demanding, because it had to be funny,” says Schumacker. In many scenes characters talk over each other or during intense action sequences, which proved not only difficult to storyboard and animate but also to voice. “I do a ton of screaming and fight scenes that I basically act out in the booth, so my voice tends to get exhausted,” says Cuoco. “But it’s so worth it because I no longer have to pay my therapist. This has become my therapy!” 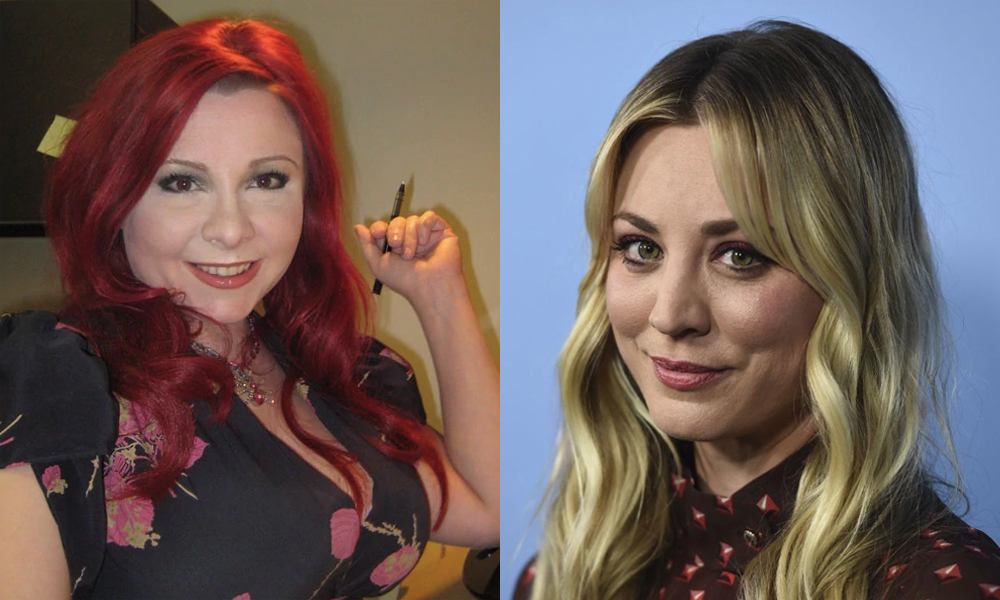 Exclusive Music Clips: ‘How to Train Your Dragon: Homecoming’ Holiday Special
Exclusive Clip: How to Draw Everest from ‘Abominable’