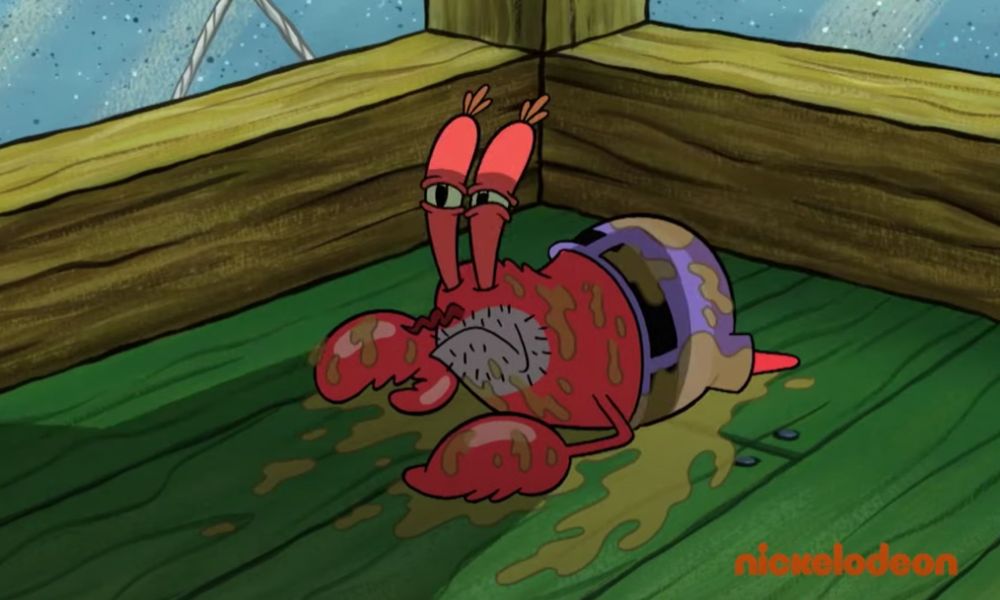 Two problematic episodes of perennial Nicktoon favorite SpongeBob SquarePants have been disappeared: IGN reports that as well as ‘panty raid’ episode “Mid-Life Crustacean” being unavailable from ViacomCBS’s new streamer Paramount+ and digital retailers like Amazon, “Kwarantined Krab” has been pulled from the broadcast schedules due to its viral outbreak plot.

“Kwarantined Krab” was set to air in the 12th season, which is still rolling out, and has been pulled from the lineup due to its unfortunate similarity to the ongoing COVID-19 pandemic, and was not included in the Complete Twelfth Season DVD set (Jan. 2021). In it, the Krusty Krab goes into emergency quarantine when a health inspector discovers a case of “Clam Flu” — but neither the staff nor the patrons know who is carrying the mysterious illness, leading to zombie movie levels of distrust.

In a statement, a representative from Nickelodeon said, “The ‘Kwarantined Crab’ [sic] centers on a virus storyline, so we have decided to not air it due to sensitivities surrounding the global, real-world pandemic.” According to IGN, the episode can still be found in corners of the internet, and a clip in Spanish has been posted to YouTube.

The Nick rep. also pointed out that the season 3 episode “Mid-Life Crustacean” (2003) “has been out of rotation since 2018, following a standards review in which we determined some story elements were not kid-appropriate.” While the network did not explicitly state which elements were in question, the plot revolves around Mr. Krabs’ midlife crisis, and sees SpongeBob and Patrick trying to lift his spirits by bringing him on a “panty raid.” They mistakenly break into the house of Mr. Krabs’ mother, who promptly sends the hard-shelled restaurateur to his old room.

The episode had been available on Amazon Prime Video prior to IGN’s article, but was then removed (along with its accompanying ep. “The Great Snail Race”). “Mid-Life Crustacean” can reportedly be found lurking in an iTunes season collection and on The First 100 Episodes DVD collection.