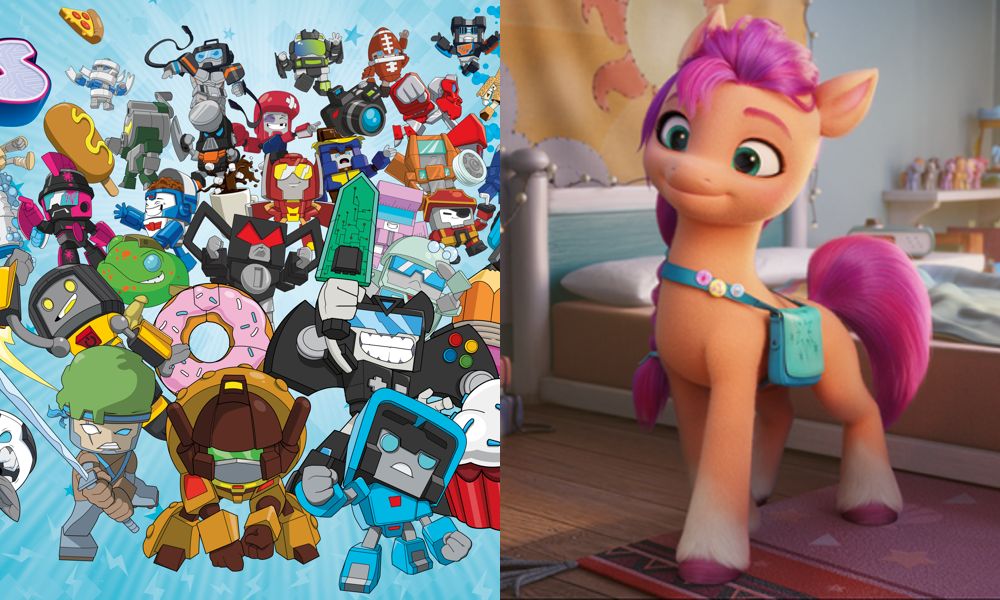 Netflix and Entertainment One (eOne), Hasbro’s entertainment studio, announce a new animated series Transformers: BotBots, inspired by the tiny toy line, and a fifth generation My Little Pony series which will reimagine the characters, alongside the all-new CGI My Little Pony feature film recently announced for Netflix and set to premiere this Fall.

Synopsis: BotBots are Transformers robots that disguise themselves as everyday mall objects. By day, these BotBots hide quietly on store shelves but at night, they jump into adventure until a group of BotBots called ‘The Lost Bots’ run into the mall security guard and put all the bots in danger. Will these misfits be able to overcome their differences, defeat the security guard and gain acceptance in the eyes of the other bots?

“We are delighted to partner with Netflix to bring an all-new Transformers story to life and explore a whole new universe with BotBots,” said Olivier Dumont, eOne’s President of Family Brands. “Transformers storytelling has expanded into so many new avenues and we can’t wait to surprise both existing fans and new fans coming to the franchise for the first time with these fun bots who are definitely more than meets the eye!”

First look at the new CG My Little Pony movie from ET.com (Entertainment One)

My Little Pony G5 Series and Film — After a decade of heart-warming friendships, daring adventures and endless laughs, the beloved pony world of Equestria is expanding to introduce a new generation of ponies to a new generation of fans. With even more humor, heart and adventure, the My Little Pony franchise will be reimagined for the first time in CGI with an all new theatrical quality feature film premiering on Netflix later this Fall. Audiences will be swept away to a contemporary and immersive pony universe brought to life like we’ve never seen it before. The movie will be followed by an all-new My Little Pony G5 CGI series.

Movie synopsis: The pony world of Equestria has lost its magic. (GASP!) Friendship and Harmony have been replaced by paranoia and mistrust, and Ponies now live separated by species. Sunny – a feisty and idealistic young Earth Pony – is convinced there’s still hope for this divided world… but her slightly misguided and often hilarious efforts to change hearts and minds have led to her being branded a misfit. When Sunny befriends a lost Unicorn named Izzy, who wanders innocently into the Earth Pony town of Maretime Bay, the town has had enough. Izzy and Sunny must embark on an epic adventure that will include a daring jewel heist, outrageous conspiracy theories, elaborate musical numbers, and the world’s cutest flying Pomeranian. Their adventures will take them to faraway lands and force them to challenge the status quo by facing their fears and making new friends out of old enemies. The world Sunny has dreamed of her entire life could finally become a reality as Sunny and her newfound friends fight to prove that even little ponies can make a big difference. In the computer-animated series, the adventures of Sunny Starscout and her friends will continue.