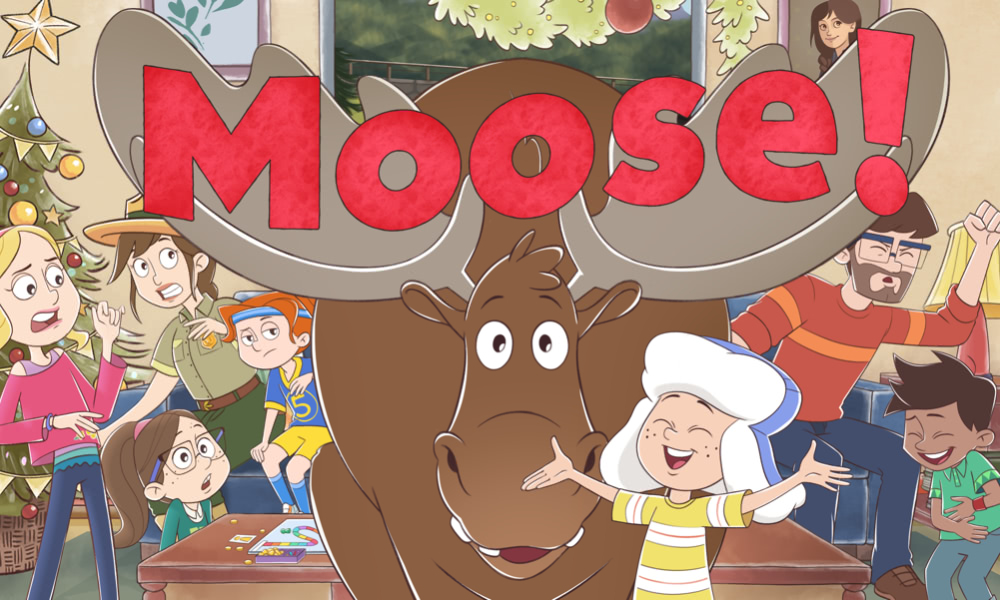 Muse Entertainment is expanding their family entertainment slate with an animated adaptation of bestselling author Robert Munsch’s children’s classic Moose! (Allez ouste, l’orignal!). The animated series (5 x 11′) launched in French on tou.tv and is also available as an hour-long holiday special on the Radio-Canada streamer.

Munsch’s books have sold more than 80 million copies in North America and have been translated into over 20 languages. Moose! has been a bestselling  book in Canada for more than a decade.

Moose! is a funny, heartfelt, character-driven story centered on a young boy named Luke and his enormous, curious pet moose. In the holiday special, the family reminisces on all of the moose mayhem they have been through over the course of the past year. With many comedic adventures to come, each episode explores Luke’s friendship with Moose, their lives at home and in their community, and the beauty of finding love and laughs in everyday moments.

“Like generations of Canadian kids, I grew up devouring Robert Munsch’s books. Munsch’s stories have resonated with families around the world for over 40 years. Every family is unique and just like Munsch’s stories, this series is designed to appeal to every type of family and all family members, from school-age children to the kid in all of us,” said Prupas. “I am grateful to Robert Munsch and his team at Scholastic Canada for the opportunity to animate his lovable characters. It takes a village of partners to bring Moose! to life. We appreciate the Shaw Rocket Fund, Radio-Canada and SRC Distribution for trusting our creative vision on this special and we look forward to producing more animated Moose! stories for audiences around the world.”

Munsch is a hero to generations of young readers. He is Canada’s #1 author for young readers with more than 80 books in print. Bestsellers include The Paper Bag Princess (La princesse dans un sac), We Share Everything! (On Partage Tout!), So Much Snow! (La Tempête du Siècle) and Love You Forever (Je t’aimerai toujours). Every one of his stories was first told aloud to children and each one is dedicated to the child who inspired the story. Munsch is a member of the Order of Canada. He lives in Guelph, Ontario.

Muse Entertainment is a leading Emmy Award-winning independent content producer of scripted and unscripted programming for network and cable, motion pictures and streaming. The company was founded in 1998 by Michael Prupas. Headquartered in Montreal, Quebec, Muse has development and production operations in Toronto, Vancouver and Los Angeles.

Trailer: ‘Sonic the Hedgehog 2’ Races to Theaters in April
An Early Look at the VFX Oscar Race