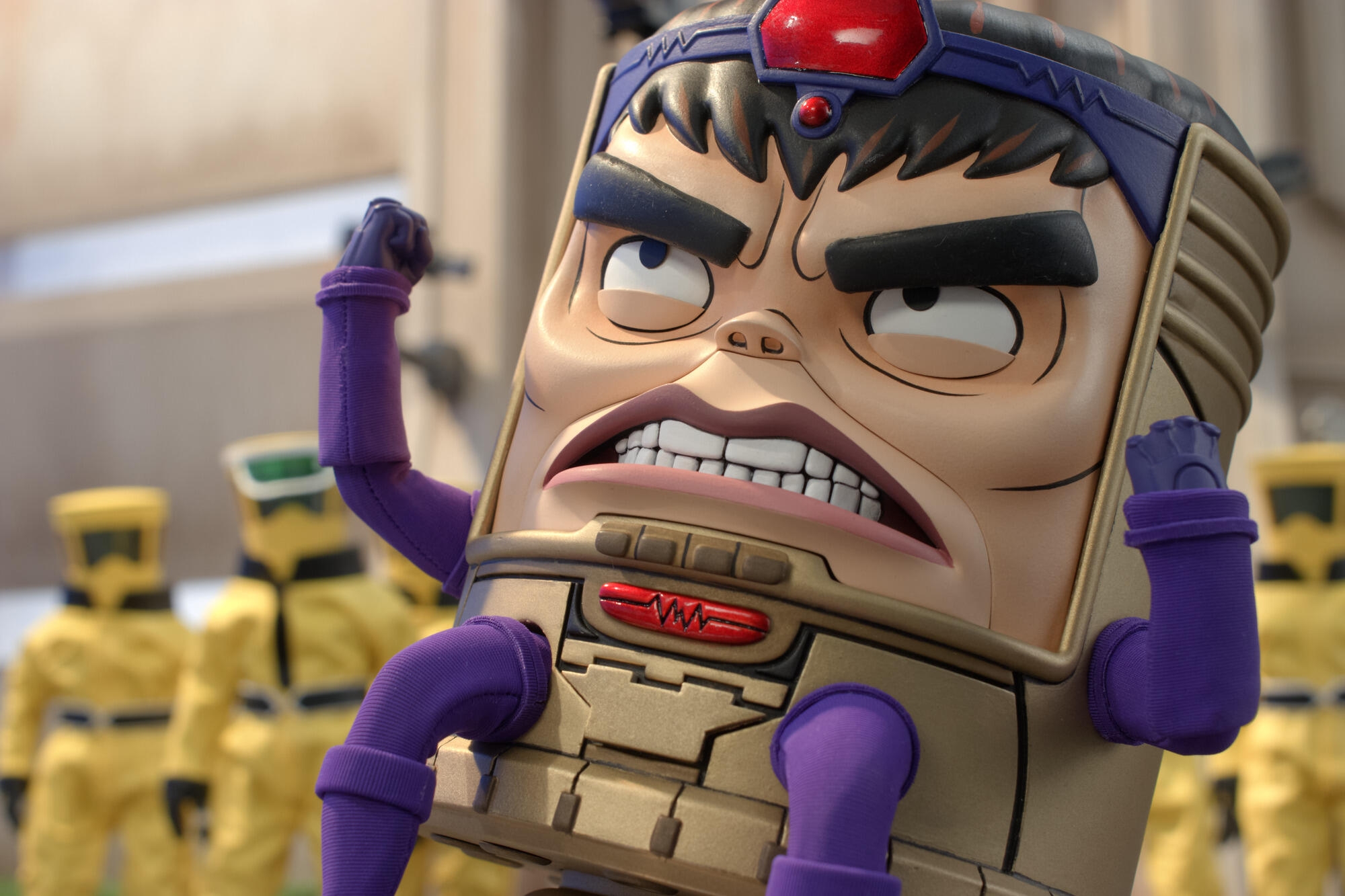 If you thought Disney+’s WandaVision was a wild ride, get ready for the delightful insanity of the new Marvel’s M.O.D.O.K. series. Since his first appearance in the 1967 issue of Tales of Suspense, the frustrated, insane supervillain M.O.D.O.K. has left a big impression on fans of the Marvel universe. Created by Stan Lee and Jack Kirby, M.O.D.O.K. (Mental Organism Designed Only for Killing) is always coming up with futile schemes to bring down the likes of Captain America, Iron Man, Deadpool, Ms. Marvel and The Hulk. The deeply insecure character is finally getting the respect he thinks he deserves when he appears in own show on Hulu in May.

Exec produced by the dynamic duo of writer Jordan Blum (American Dad!) and everyone’s favorite writer/comic/actor/awards show host Patton Oswalt (Ratatouille), not only is the show incredibly funny, it also features terrific stop-motion animation by the cool crew at Stoopid Buddy Stoodios (Robot Chicken). “I always wanted to work in this world of subterranean D-list heroes and villains of the Marvel universe,” says Oswalt, who also voices the main character. “For me, the thing that was most exciting was being able to mess around in the weird side alleys of this world as well as make the main character somewhat human and relatable, as we also explore his home life with his wife and kids.” 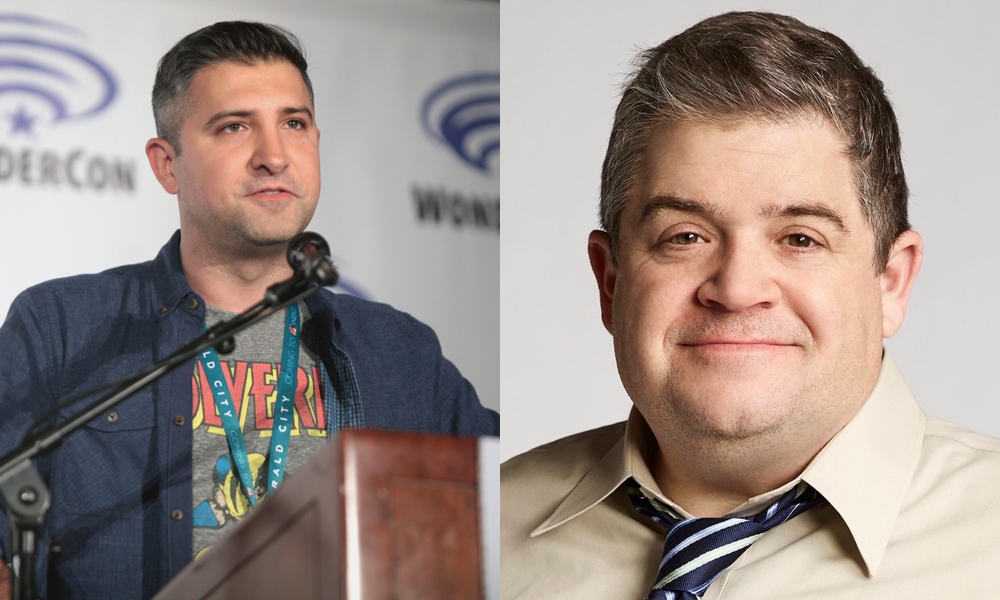 Blum says he had been wanting to work with Oswalt for a long time. The two had previously collaborated on a pilot for FOX, so when Blum had a meeting with the folks at Marvel, he jumped at the chance to get Oswalt involved again. “He has the perfect voice and spoke the language of superheroes,” says Blum. “They always say never meet your heroes, but in Patton’s case, it was the exact opposite. He is such an amazing and incredible collaborator. We both have this great love for comic books. In fact, we always ran into each other in comic stores around town.”

Blum and Oswalt joined forces to develop and build their M.O.D.O.K. series and things got rolling when Marvel and Hulu bought their package two years ago. “After we wrote the pilot and show bible, we had to figure out the look of the show, so we got several presentations from different animation studios.”

The duo says they were blown away by what Stoopid Buddy put together. “They actually did two versions, the first one was standard 2D animation, and the other was stop motion,” says Blum. “Not only did their stop-motion version stand out, it also incorporated some native, hand-held, verité camera style that was unlike anything else I had seen before. It was cinematic, had great craftsmanship and made great use of depth of field and camera movements. It looked like something Laika would do. It’s a very crowded market for animation, and you really need to have a distinctive style that doesn’t get lost in the shuffle.” 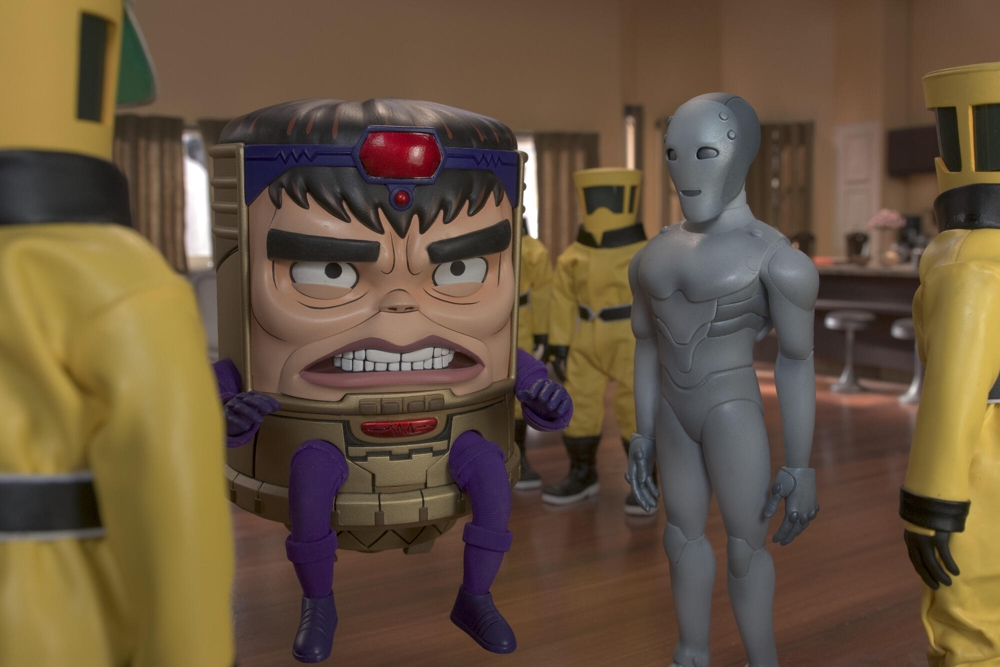 Fortunately, the production began before the COVID shutdown last year, so they were able to get a good part of the job done. Afterwards, health precautions were put into place at the studio. The dailies and post work was done remotely. “They had to bring in a safety specialist at the studio and everyone was tested weekly,” says Blum. “There are 30 mini-stages at Stoopid Buddy, and we had only one or two puppeteers working at the same time, and then the camera crew would check in. The work was slower, but everything was beautifully crafted.”

The design team had to build hundreds of elaborate sets that represented the wild universe of the main character and the Marvel superheroes. “A lot of the show was written before we knew it was going to be a stop-motion project, but the team at the studio really embraced the challenges,” says Blum. “The sets are really works of art. They had to build places like Asgard and Murderworld, and the scale of these worlds are unbelievable. You actually forget that you’re watching a stop-motion show.” 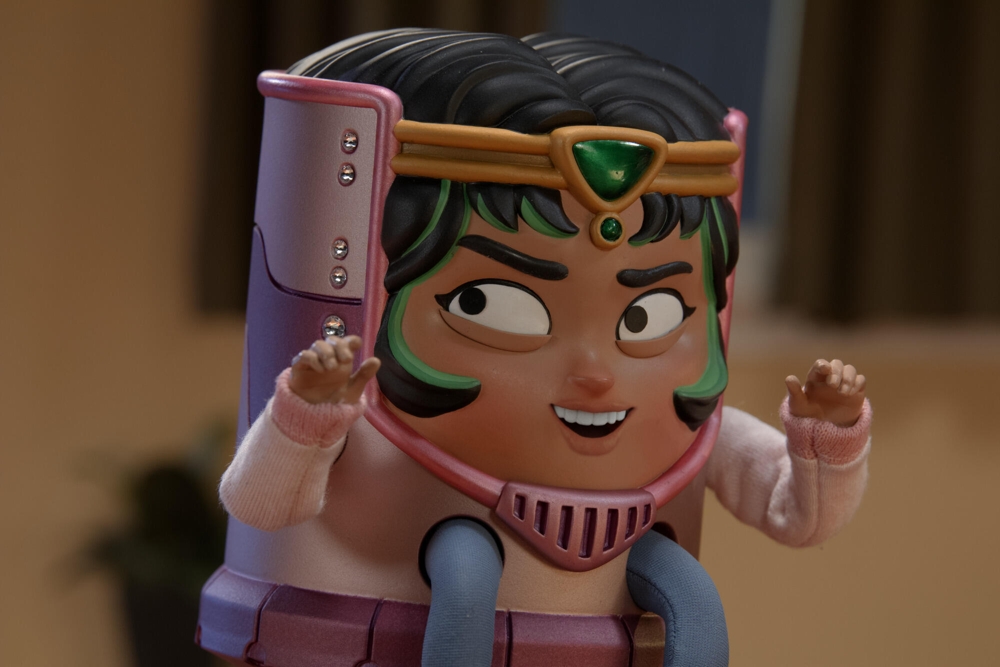 Oswalt, who is a huge comic-book and animation fan, says he loved Stoopid Buddy’s attention to detail on the show. “I love the fact that we could pack so much in 3D in every frame, and we could hide things behind each other,” he notes. “We could use deep focus and have visuals that look like it was shot by a hand-held camera for a documentary film. Animation allowed us to have some massive set pieces with plenty of collisions. You can also bring out vocal performances that might get lost in a live-action piece.”

The writer/actor/exec producer says he got a big kick out of exploring the domestic side of M.O.D.O.K.. “He has this huge ego that thinks he can rule the world and enjoy a family life in his own twisted way,” says Oswalt. “He thinks his wife and kids are another way of showing off his might. But he really loves them, and he’s about to go through some serious ups and downs throughout the show.” 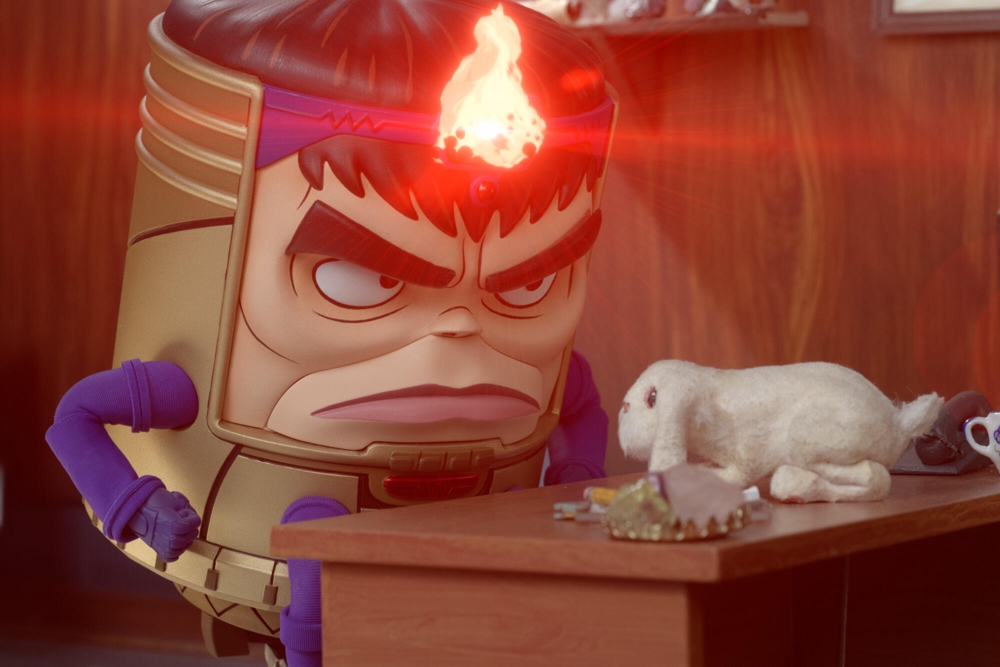 According to Oswalt, the toughest part of the job was keeping his inner Marvel geek in line. “I had this knee-jerk reaction to pack as many Marvel Easter eggs and fun references as possible in every episode,” he admits. “Luckily, Jordan was there to wrangle me when my brain was getting ahead of me. As an actor, the big challenge was to find these moments when M.O.D.O.K. shows his vulnerable human side — although he is this screeching half-robotic monstrosity!”

For Blum, the show was a chance to learn a whole new side of animation beyond the 2D world of American Dad!. “There was a whole new set of tools to learn,” he says. “In 2D TV animation, you have a lot of chances to change things during the animatic, reading, color stages, etc. but with stop motion you have to lock everything early on. It’s more like live action than animation.”

Blum says the show’s writers room was made up of a tight-knit group of eight who connected and bonded quickly. “It was a lot of fun to find the show with our diverse staff as they brought their own stories to the table,” he notes. “What’s surprising is the show has a ton of heart although it’s about a floating head! In a way, it’s a relatable story about a very driven person who has lost his way. He loses his business and his family in his 40s and has to rediscover what he wants out of life.” 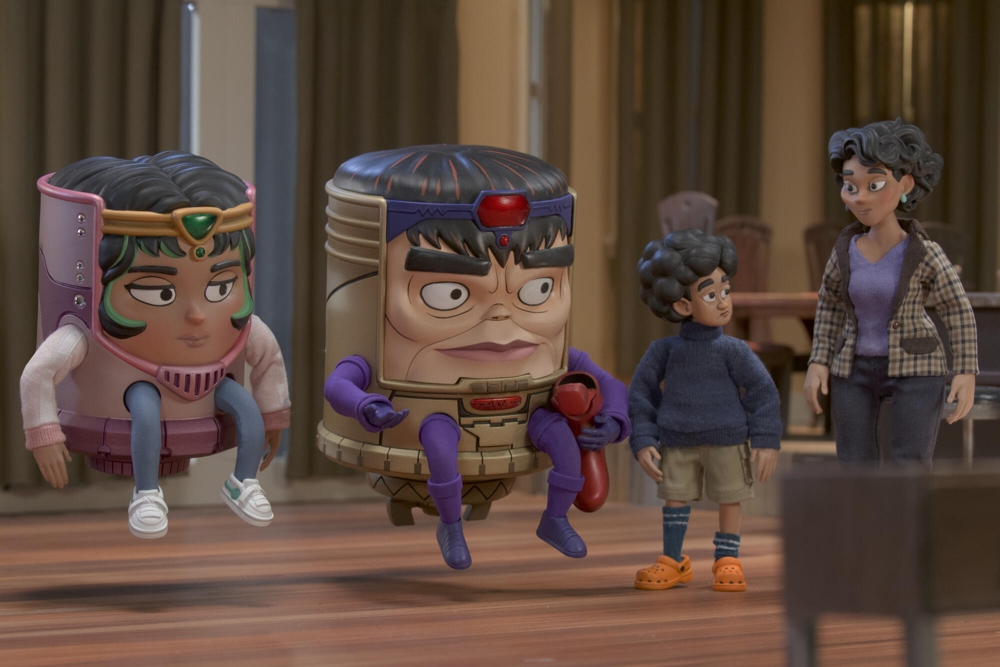 He adds, “Stan Lee and Jack Kirby infused all the characters in this universe with so much humanity and relatability. That’s why we are even able to see a lot of ourselves in M.O.D.O.K., who is this frustrated, ego-driven person who is essentially humbled. That’s the reason these characters have lasted for over 60 years.”

Both Blum and Oswalt are hoping that audiences will have a great time investing in the show’s offbeat characters. “I think they’ll have a great time with the comedy and the emotional relevance of the show,” says Blum. “We hope they go on this serialized adventure with M.O.D.O.K. and his family. Things are messy and don’t get resolved at the end of each episode, and in fact, the first season ends with a pretty huge cliffhanger!”

“Like all Marvel projects, we have this combination of fun and surprise: We hope the audience is surprised by all the human zigzags we put into it,” says Oswalt, sounding like a very crafty world dominator!

You may also like...
Related Topics:featured, Marvel’s M.O.D.O.K
Geographic Region:Worldwide

It’s the End of the World as They Know It: The Making of Sony’s ‘The Mitchells vs. the Machines’
News Bytes: ‘Muppet Babies’ Suit Dismissed, Cleve Hall Dies, Golaem Academy & Event Updates