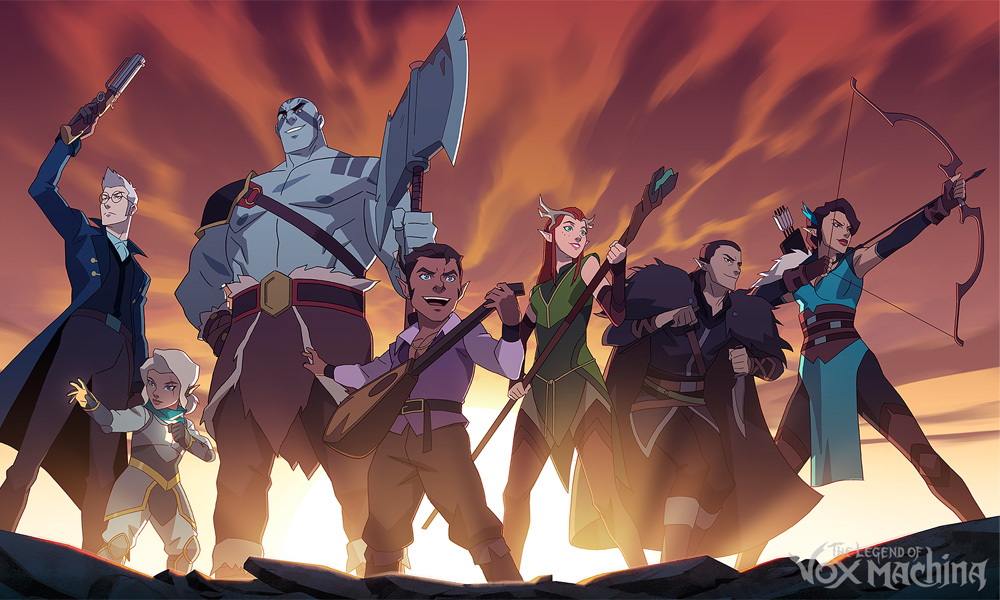 Today, in the latest installment of their digital series The Legend of the Legend of Vox Machina, the rockin’ dice rollers of Critical Role revealed that the upcoming Amazon Prime Video animated series The Legend of Vox Machina will has brought on DC animation icon Phil Bourassa (Young Justice, Batman: Bad Blood, Justice League) as lead character designer. The episode also revealed a first look at the new character designs for the popular questers’ latest incarnations.

“I met Travis before I knew about Critical Role; he was playing one of the heavies in a Batman movie I did the character design for,” Bourassa reveals. The two happened to run into each other years later on a flight from L.A. to N.Y.C. heading to New York City Comic Con, and Willingham pitched the artist on the new show. Bourassa was quickly won over: “I’m just shy of 20 years doing this and I spent the last 11 consecutive years doing superheroes … but fantasy is my first love.”

The Amazon Original series The Legend of Vox Machina follows a group of second-rate adventurers on a quest to save the realm from terrifying monsters and dark magical forces. Throughout the first season, our characters will face undead giants, overthrow a sinister necromancer, and confront a powerful curse that has taken root inside their own group. Through it all, they learn how to function as a team, and discover they’re much more than that: they’re family.

The first-look delves into Bourassa’s process working with the Critical Role stars-slash-creators to capture the spirit of the characters.

“There was something about the project that spoke to me on a deeper personal level that I was willing to take a chance on working with a completely new creative team,” Bourassa shares. “Critical Role presented this opportunity to be at the ground floor of something relatively new and fresh. And even though the lore is clearly well-defined, and the characters were well-defined, there was so much to explore on a visual level. Normally when I’m creating a design, it comes from the written word or a comic book or even just a writer’s script. These characters come from the imagination and the heart and the soul of the voice actors, the cast members, who are the creators and founders, right? So they were very involved!”

“His design work is immaculate, his creativity is brilliant … He just came to this with a vigor and excitement that we couldn’t help but be excited alongside it,” Mercer noted, with the rest of the cast sharing his enthusiasm.

The Titmouse creatives noted that the visual goal for The Legend of Vox Machine was to create an adult animated series that felt sophisticated and unique, with artful attention paid to the characters and backgrounds to create a compelling fantasy world. They also pointed out that both the studio and Bourassa draw influences from Japanese anime, making this a perfect creative partnership (Bourassa can be seen sketching on a tablet in front of Princess Mononoke poster in the video.)

Art director Arthur Lofits, whose credits include background artist on Voltron: Legendary Defender and Mao Mao: Heroes of Pure Heart as well as vizdev on Netflix’s upcoming Pinoy comics adaptation Trese, notes: “Phil is pretty much a legend in the animation industry out here, and the idea that he would be coming on to the project with us — I don’t think I even believed it at first.”