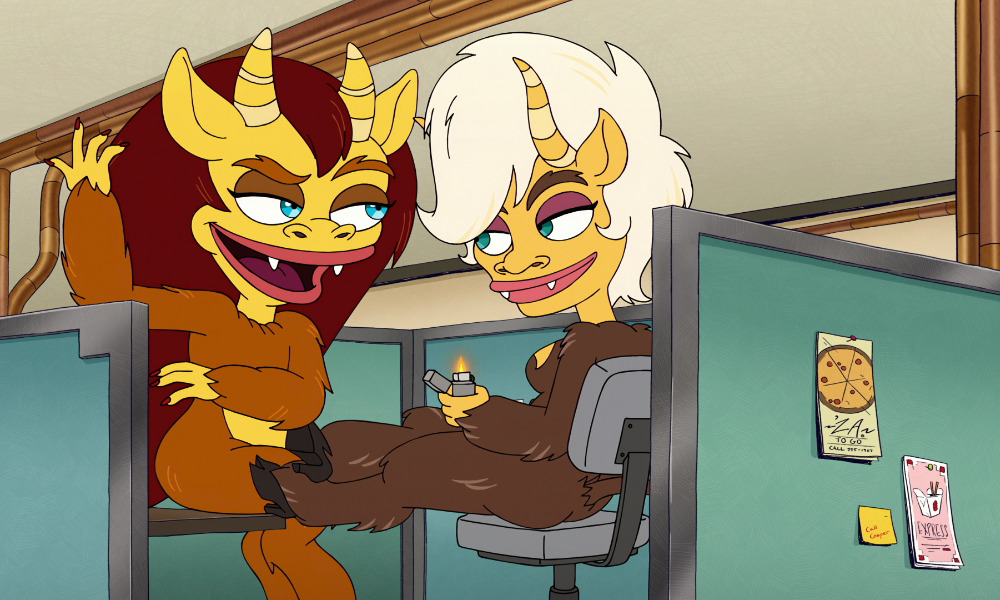 Big Mouth fans will learn more about favorite characters like the Hormone Monstresses Connie and Mona (voiced by Maya Rudolph and Thandiwe Newton) in Human Resources.

***This interview originally appeared in the April ’22 issue of Animation Magazine (No. 319)***

We recently had the chance to speak with the show’s Emmy-winning writer and executive producer Kelly Galuska (Big Mouth, BoJack Horseman, Archer), who co-created the series with exec producers Nick Kroll, Andrew Goldberg, Jennifer Flackett and Mark Levin, to find out more about this clever spinoff. Here is what she told us: 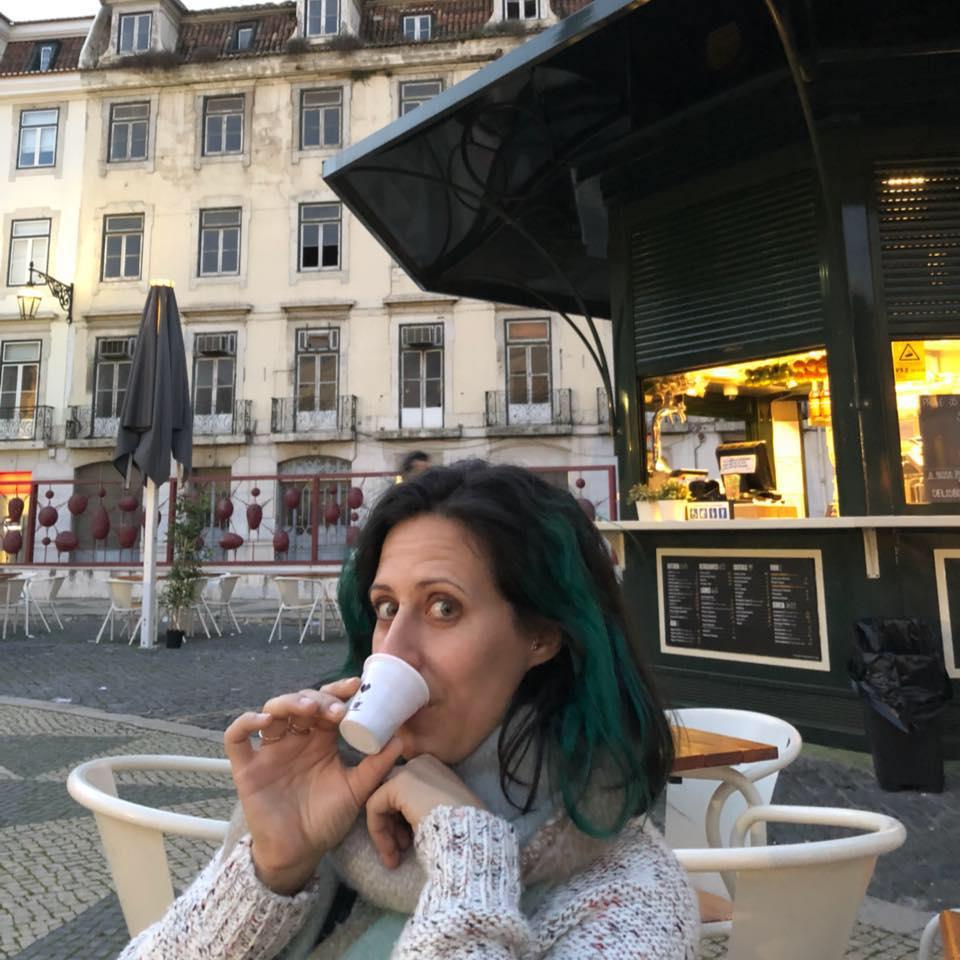 Animation Magazine: When did you start thinking about coming up with a spinoff for Big Mouth?

Kelly Galuska: I believe it was around the time we came up with the Season 2, Episode 10 of Big Mouth, when we realized how much we all loved Maury and Connie, and then the Shame Wizard followed, so it felt like a natural way to expand the universe. The writers’ room began in July of 2022. This was a full-Zoom writers’ room. There were writers that I never got to see, which is sad, but it was amazing that we were able to do that. We had seven or eight full-time and a couple of part-time people who came in as consultants.

What do you love about the new world of Human Resources?

One thing I love about it is how emotional it is. It can also be incredibly funny and gross, just like Big Mouth. We can also delve into human emotion in deeper ways than before as we expanded our cast of characters to include so many more emotions. Beyond that we can explore so many different life experiences. We run the gamut of all the things that make being human so hard from the point of view of these kooky creatures.

Do you have any favorite new ones?

I say that I do, but then I end up naming all of them. I have to say I love Pete. He is our Logic Rock and he can be so dry and analytical but he has this heart deep inside him. Randall Park is wonderful as this character. Emmy (Aidy Bryant) is another heartbeat of the show. She brings us into this world as a Lovebug. She is an absolute mess, and I relate to being an absolute mess — hopefully I’m not one anymore — but I think she’s really an interesting character to hold on to. 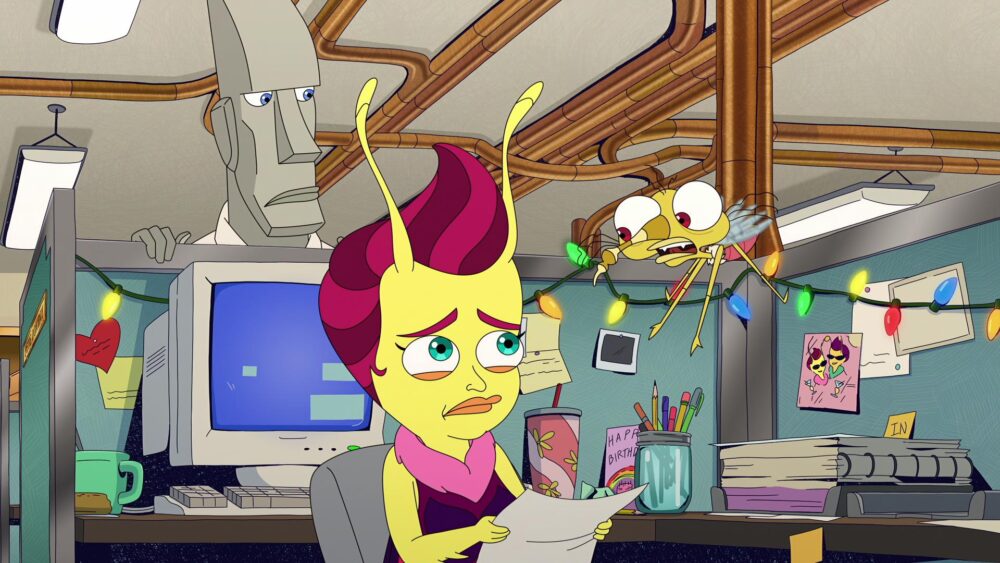 What is the most difficult part of writing for these characters?

One of our big challenges is how expansive it is, which can be a positive thing, too. But there are no borders on what kind of stories we can tell and what types of emotions we can explore. So, because of that it can be tricky with one human being having so many emotions. We have to figure out a way to have them work together so that it makes sense. As difficult it is to be human, it’s also very difficult for these creatures to figure out how to help them.

This show probably opens up the doors to all of your own adolescent traumas and experiences, right?

Oh, big time. That’s something we did very much in Big Mouth, which was every writer’s most embarrassing and horrifying experiences growing up. We continue to delve into that. The first season we have a woman giving birth in the first episode, and I wrote that after giving birth to my first child six months before that. That’s part of what makes the show feel real since it comes straight from the experiences of all of us in the room. 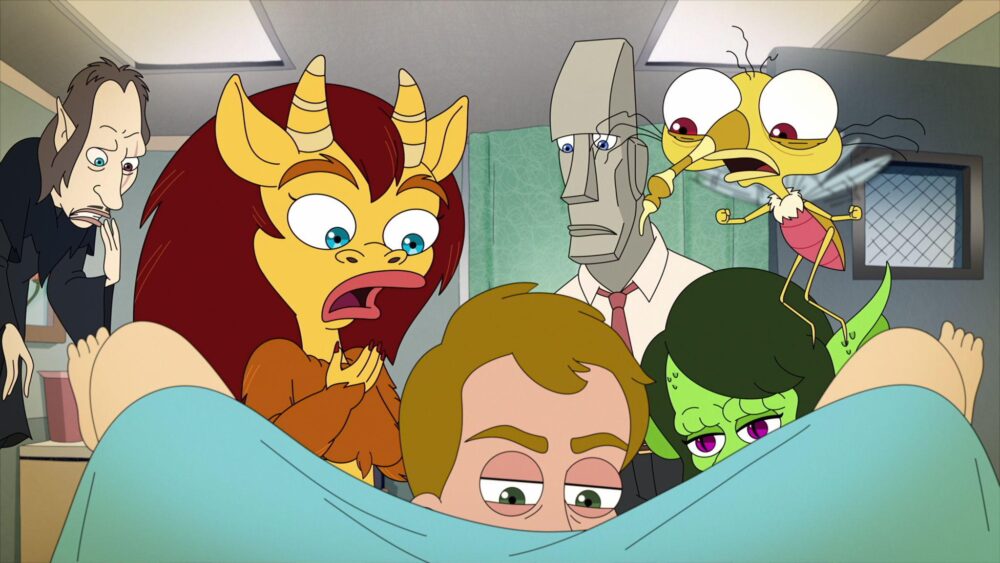 Human Resources premieres with a bang — or rather, a birth.

You’ve worked on some incredible shows like Archer, BoJack Horseman and Big Mouth. But, you started in live-action comedy, right?

Everything I wrote on my own was single-camera live-action, and then my first staff job was multicam (Mom), which was very different from that. And then after that I went into animation, and I am so grateful to have it. Of course, BoJack really changed me as a writer. I learned so much from the show creator Raphael Bob-Waksberg. He taught me a lot about how to be a good boss. On a personal level, I learned what it means to create a safe environment when we could talk about deep dark things. I have always been drawn to both the sad and the happy in a comedy show, and nothing did that more than BoJack. I mean, it could be quite depressing, but very funny at the same time. It’s about carrying that humanity in comedy that really stayed with me.

Which shows really made a big impact on you when you were growing up?

I was very much into Ren & Stimpy growing up, which I realize translated into Big Mouth and how fun it is to be gross. I grew up in the age of a great run of Disney animated movies. As I got older, Good Will Hunting made me understand that I could write the material that I love so much. That really changed my perspective on what kind of writing I wanted to do. 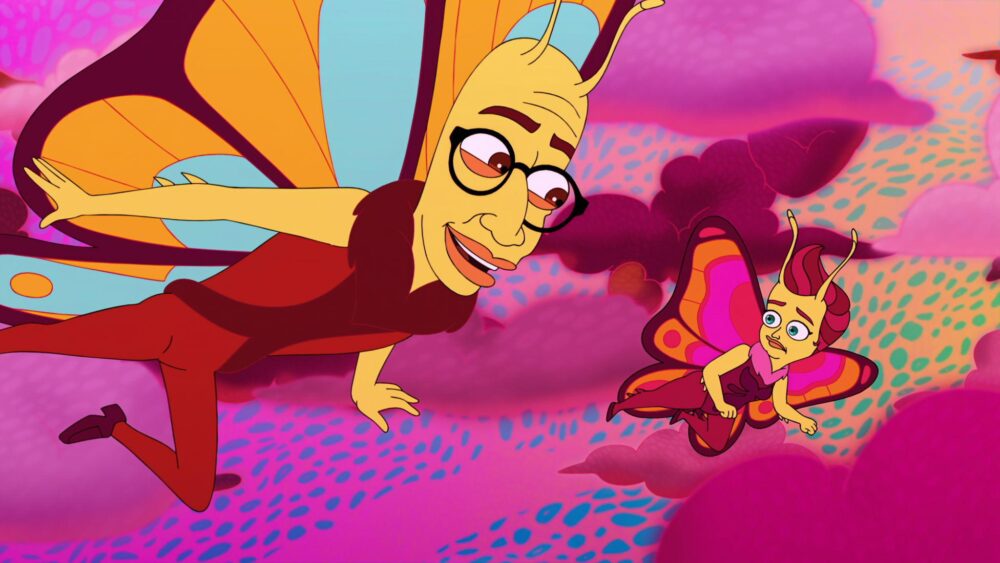 The artists at Titmouse were able to stretch their imaginations to expand the supernatural world of the Human Resources creatures. (Pictured: Brandon Kyle Goodman as Walter the Love Bug, with Emmy.)

Can you tell us a bit about the visuals of Human Resources? It is definitely in the same family as Big Mouth.

Yes, it has the same visual style as Big Mouth. Titmouse does a great job with the animation. We are always looking for big animation moments. With these creatures, it has been fun to expand their universe and explore a world that is not Earth, for example when we go inside the Department of Magical Thinking. That was a fun thing to discover and explore the look and feel of being in outer space. One thing I love that has been brought into the forefront by Anthony Lioi and the team of artists is the organic nature of everything in this show. The cars, our creatures, the buildings — everything has this organic feeling. I love the bright and colorful look and it’s a lot of fun to look at.

Do you have any tips for those who want to write for animation?

I think it’s very important to watch a lot of what you want to write. Watch TV and movies and come to understand how it’s done. That’s what I did. I studied scripts and movies, and that’s how I found my voice. Keep writing. You need to write so much to get there, and that’s the fun of it too. That’s the only way you can find your own voice, when you get the agglomeration of all the things you love bonding together and becoming the thing you end up writing! 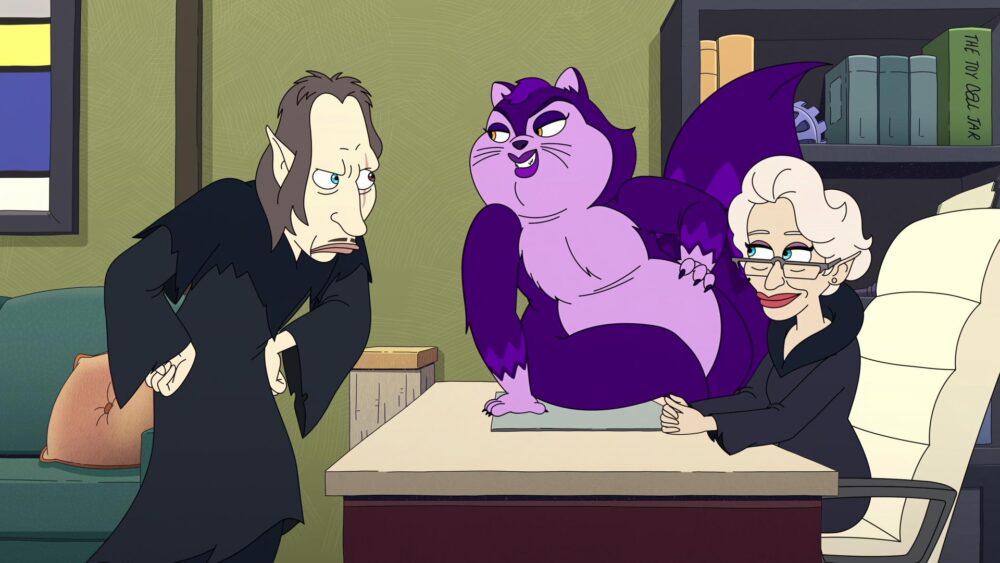 Final question for you: What do you hope audiences will get from the new show?

I hope they’ll see the humanity in the show. I know it’s funny the way Big Mouth is funny — I hope there’s an added element of appreciating what it means to be human, and the fact that it is difficult for all of us. Hopefully we all have these imaginary creatures in our brains and in our hearts who help us get through each and every day.