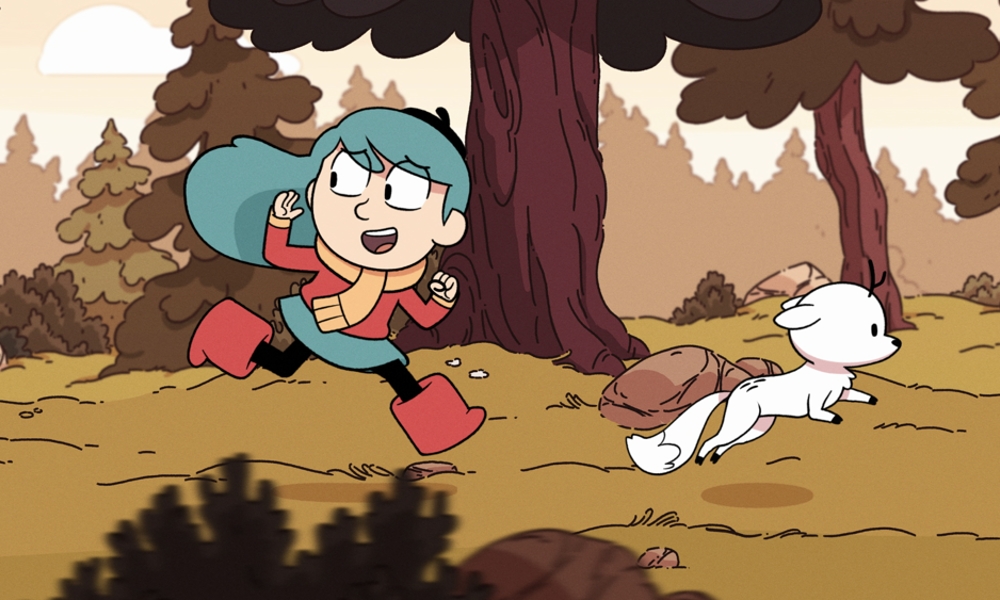 ***This interview originally appeared in the January ’21 issue of Animation Magazine (No. 306)***

When Silvergate Media and Mercury Filmworks’ animated series Hilda premiered on Netflix back in September of 2018, audiences quickly fell In love with its fearless, blue-haired protagonist, her deerfox Twig and the strange and fantastic characters that inhabit creator Luke Pearson’s wonderful universe. The Annie and Emmy-winning show is coming back for its second season this month, so we thought it would be a great time to catch up with some of its talented creative team to find out what’s in store for our favorite heroine. Here is what creator/co-exec producer Luke Pearson, headwriter/co-exec producer Stephanie Simpson, series producer Bryan Korn, director Andy Coyle and Netflix director of original animation Dominique Bazay told us in a recent email roundtable! 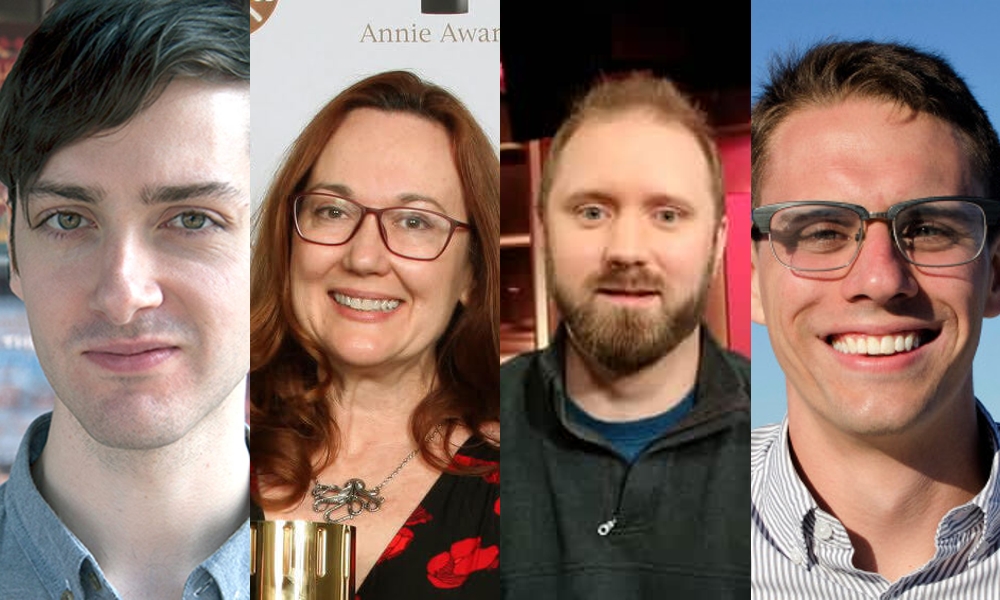 Animag: We are all very excited about the second season of Hilda. Can you tell us a little bit about what we can expect to see this time around?

Stephanie Simpson: Hilda is going to deal with a real antagonist for the first time, someone who’s so pompous that he’s ridiculous, but so power-hungry that he’s more dangerous than your average angry troll! And if you’re a deerfox fan — and who isn’t? — then prepare to see Twig in a whole new light!

Bryan Korn: In this season, we delve deeper into the magic of Hilda’s world, exploring ghost ships, witches’ mazes and islands that are actually sea monsters. You can also expect to hear an all-new soundtrack of licensed songs featuring Orville Peck, Stereolab and Frankie Cosmos.

Second seasons of hugely popular shows can be tough. What were your biggest challenges?

Simpson: Staying fearless like Hilda in our storytelling and being willing to take the characters to new places while remaining true to their strengths and their flaws. But, such is the life of a writer-adventurer!

Luke Pearson: There was less of an immediate road map. Season one adapted and expanded four comic stories, but season two only had one existing comic to adapt. So, we had to come up with a lot more original stuff. And because we began writing before season one launched, I think another challenge was figuring out the best way forward before we had any feedback on the first season. 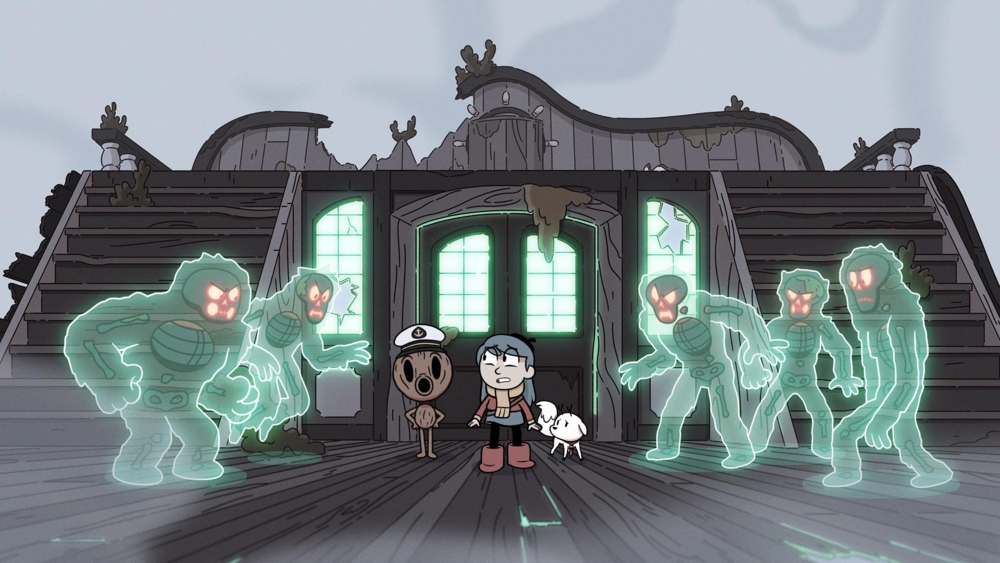 What do you think it is about Hilda and her universe that has struck such a chord with audiences worldwide?

Simpson: There’s so much to love about Hilda and her universe, but for me, I think it’s the unique balance of the epic adventure moments and the quiet, authentic character moments. And there are no throwaway characters in Hilda’s universe. Every single being — human, elf, troll or otherwise — is treated with respect and with the goal of understanding their point of view, even if that point of view is different from yours — especially if it’s different from yours!

Pearson: People seem to really respond to the cozy feel. And I think there is something to the fact that when you take out the creatures, Hilda’s world is quite easy to bring to life with a bit of imagination. I often see kids doing Hilda-inspired activities, going into the woods and so on.

Did you have any idea the show was going to be such a huge critical and commercial hit?

Pearson: No, but then I didn’t really know what to expect and generally I try to keep my expectations pretty grounded. I felt that it was good and that it should be a hit! I think the show skews a bit younger than some of the shows people were pre-emptively comparing it to, so I was worried there might be some disappointment there, but I never really saw any of that.

Korn: We knew that Hilda would find a strong audience in viewers who were hungry for fierce female heroes leading adventure stories, which was rare at the time we were developing the series. But we could not have anticipated that the enthusiasm would come from such a broad spectrum: kids and parents, animation lovers, fantasy fans, troll enthusiasts.

Bazay: The pitch for Hilda was unique. Kurt Mueller [EVP Creative Content at Silvergate Media] and his team always put a special touch on the materials they share. This time the pitch came with a vinyl record, pressed especially, with reference music for the show. It was pretty effective, we could immediately imagine how Luke Pearson’s incredibly rich art would translate to animation. Stephanie Simpson as a head writer just made it even more exciting. We engage with every project we make in hopes that our members will find joy in it. This was a great start! 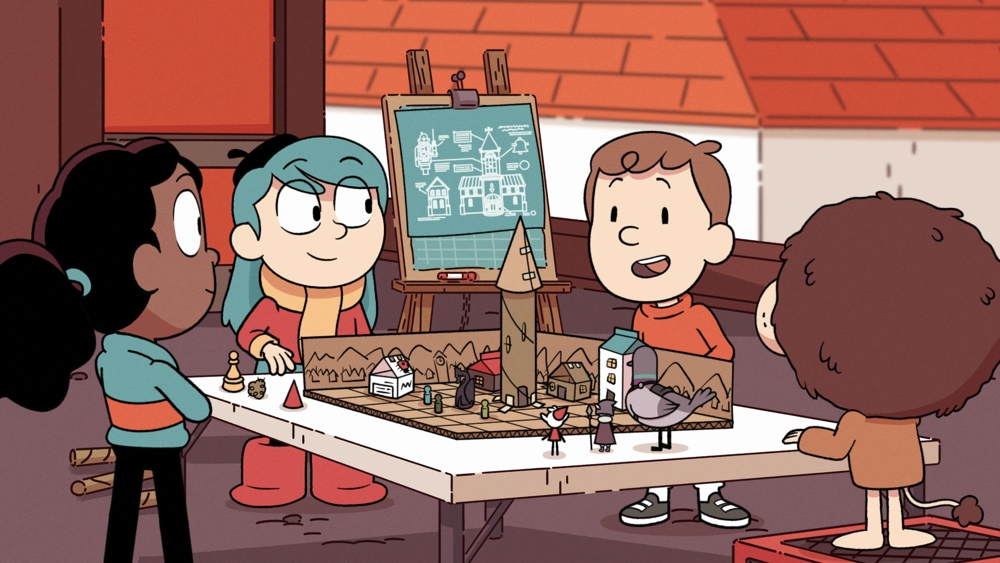 How many people work on the series?

Korn: The Hilda creative team spans many time zones; we were “Zooming” before it was cool. There’s writing in L.A., animation in Ottawa, the producing team in New York, the cast in London and Luke powering everything from his home in Nottingham. The series benefits from diverse points of view across each stage, making Trolberg feel true and vibrant without being fixed in a real time and place.

Andy Coyle: There’s a lot of moving parts at all times when in production, over 130 artists in different phases put the show together.

Where is the animation produced and which animation tools do you use to produce it?

Coyle: The show is produced at Mercury Filmworks in Ottawa, Canada. We use a combination of a whole bunch of tools to make Hilda. Our primary pipeline is built around Toon Boom’s production software, like Storyboard Pro and Harmony, and Adobe’s CS package. We still do some roughing and sketching on good old paper, and I cannot overstate the importance of yellow sticky notes!

How did you all deal with the restrictions caused by the pandemic?

Coyle: It was such a strange adjustment. I’m so used to being very hands-on with all the artists, and once the pandemic happened, we all felt a bit distanced and isolated. Luckily, the team is a bunch of professionals who know how to do their job, so we just got everybody up and running at home and did a lot of video calling! I record myself going through material for launches, rather than doing it in person. For the second season we were able to complete our pre-production before the pandemic happened, which was helpful, so it was just finishing production and post-production, but for the Hilda movie we’re doing it all in this more virtual environment. Ironically, I think maybe it’s our greatest piece of work despite the challenges. 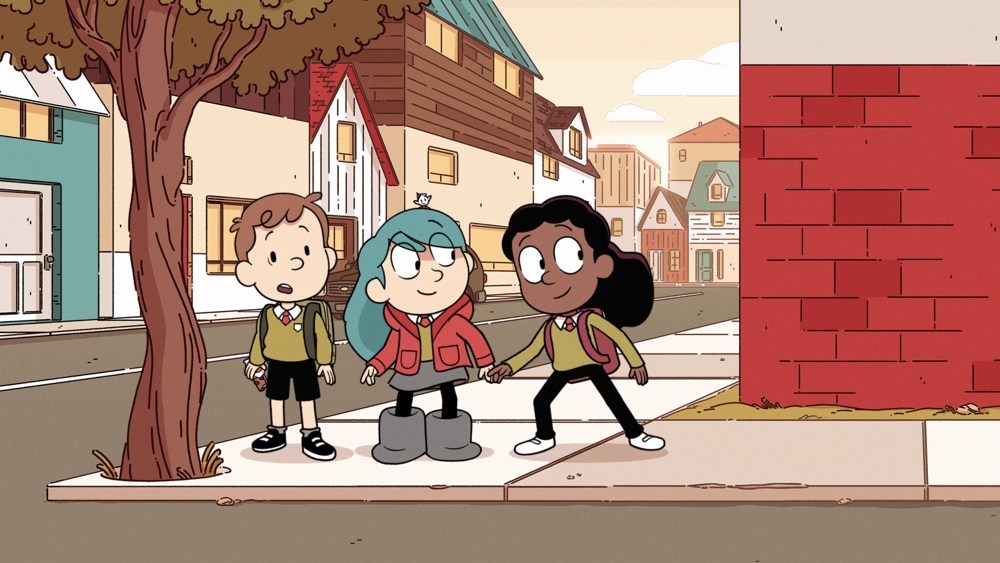 What is your take on the state of animation in 2020-2021? Do you think there is such a thing as too much animated content out there?

Korn: Never. We desperately need more animation from underrepresented creators. There’s an insane wealth of storytelling talent that is just on the other side of our industry’s institutional barriers. There will never be enough animation until those stories are told.

Coyle: I don’t believe there’s such a thing as too much animated content, though I am disappointed in the lack of variety. Animation is simply a medium, not a genre. There couldn’t be too much of it any more than there could be too much live-action content. For some reason, you overwhelmingly get the same kind of things produced over and over though, and I’d like to see more variety in the types of animation being made. Obviously, it’s better than it’s ever been, so I would like to think this higher demand for more material sets the stage for some different points of view to get some success. You’ve got things like Genndy Tartakovsky’s Primal and Cartoon Saloon’s Wolfwalkers being made, which gives me great hope.

Who are your biggest animation heroes/influences?

Pearson: I really like classic British animation by the likes of Oliver Postgate, Ivor Wood, etc. I also really like the Russian animator Yuri Norstein. And I’m a big Miyazaki/Ghibli fan, which is probably obvious.

Coyle: I get asked this question a lot and it’s so hard to answer! Most of my influences come from American live action, the stuff I was drawn to as a kid that developed my sense of storytelling and cinema. There are lots of people in modern animation whose work I admire and respect, but they don’t necessarily influence my work. There’s so much great stuff out today. In a technical sense, Tomm Moore’s Secret of Kells and Song of the Sea, Benjamin Renner’s Ernest & Celestine and Big Bad Fox. Those are amazing pieces of work. The very first film I ever watched in a theater was The Land Before Time, so that had a profound effect on how I developed as a storyteller. With Hilda, I obviously made a conscious effort to take influence from Hayao Miyazaki’s films, and Astro Boy was another touchstone. 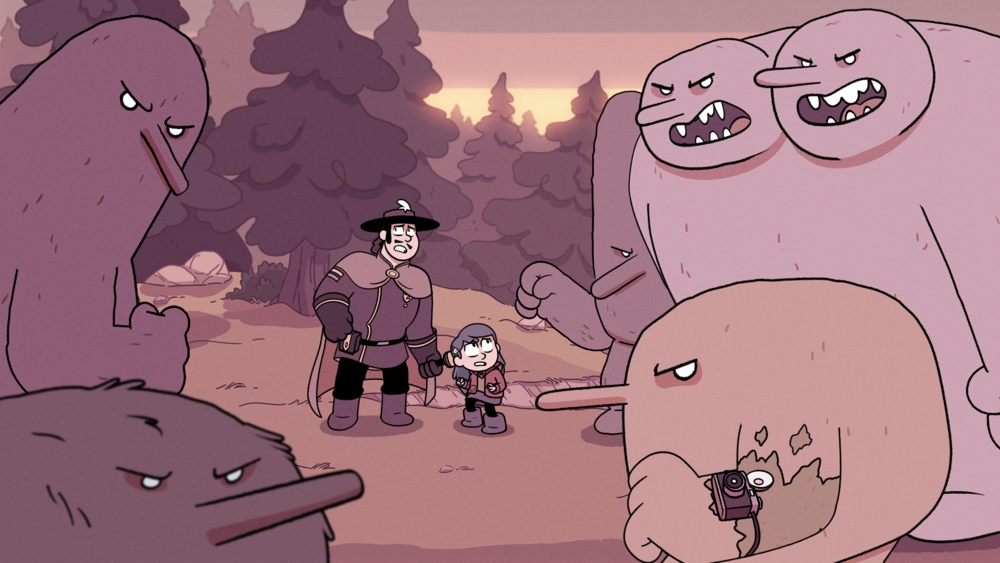 What are some of the responses to the show that have really moved you over the past couple of years?

Pearson: It always warms my heart any time I see a kid on World Book Day or Halloween, looking really proud in their Hilda costume.

Simpson: Most recently, it’s been hearing from kids — and grown-ups — that watching Hilda has been a comfort to them during these anxious times. One little girl said to me that she likes the show because “things can get scary and you can mess up, but it will be okay.” I just love that. And I believe it, too.

Korn: We premiered the first two episodes of season one at the Brooklyn Public Library to an auditorium full of kids. When the first episode cut to black, the projectionist accidently put the house lights up… the kids went wild thinking it was over. Then when another episode started, they almost rioted. It was the best audience anyone could ask for.

Coyle: The most common thing I get is generally, “My kid put this show on, and 30 minutes later I found myself sucked into it, too.” The idea that parents and their kids can experience it together and share that is pretty beautiful. Stuff like that gives all of this work purpose.

Bazay: It’s hard to describe how it feels to meet super fans of an original show. It happened for us at New York Comic Con a few years ago. Fans dressed up as Hilda, complete with Twigs and Alfurs. It was very moving to hear about the impact the series was having on people. It meant a lot to see Luke meet them in person. As a creator, I’m sure that’s the best form of success.

The second season of Hilda premieres on Netflix on Monday, December 14.