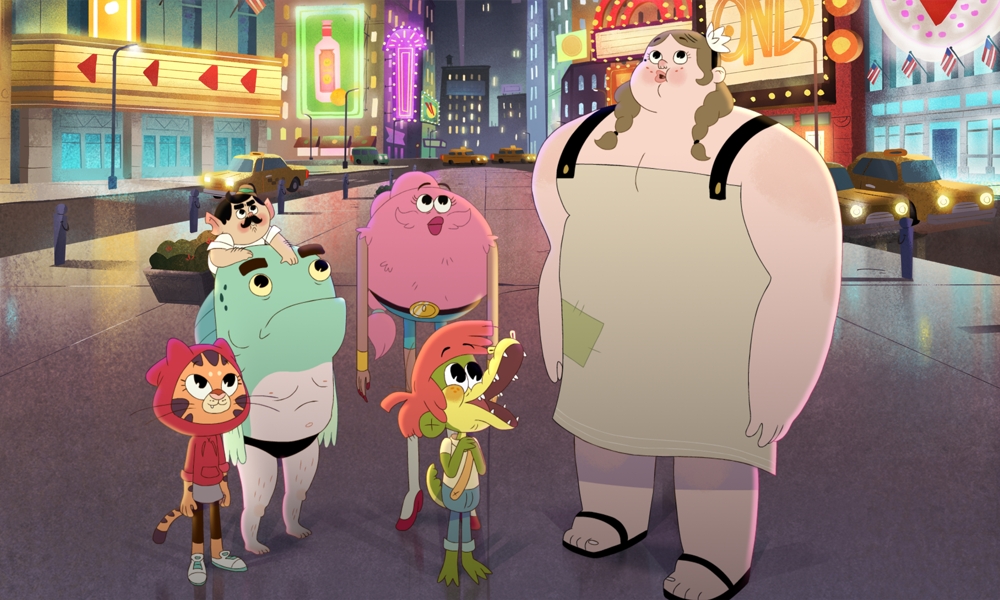 “At heart, I’m a story person,” says Ryan Crego, creator, writer and director of the animated musical feature Arlo the Alligator Boy. “And so a lot of ideas really come from sketches rather than words. I just tend to find that that’s where I build characters and start to create stories, so that’s where Arlo came from.”

When the movie premieres this month on Netflix, audiences will discover that Arlo is an unrelenting optimist. And his positivity is as infectious as the energetic, thoroughly modern pop tunes that propel his story through the feature and toward an upcoming follow-up series, titled I Heart Arlo.

Arlo’s arrival has been a long time coming for Crego, who first came up with the character more than 10 years ago. Crego says his initial pitch for an Arlo project was rejected back then and he shelved it for several years before returning to the optimistic little ‘gator from the swamp. 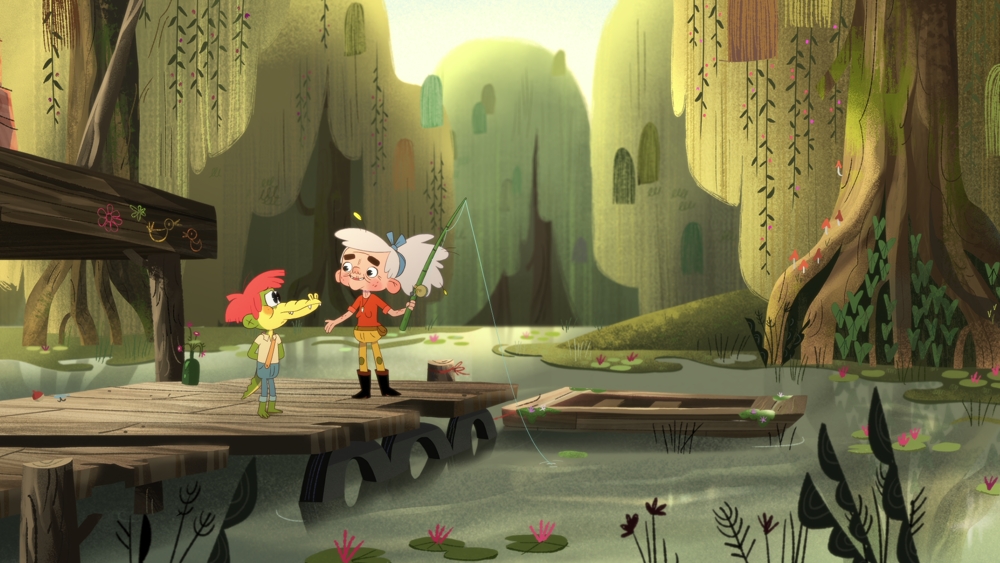 A Pure Heart vs. the World

The character was inspired by Crego’s love for movies like Elf, where a pure-hearted character is thrown out into the world to see how they measure up. Crego says Arlo was his first attempt at pitching a movie, and looking back at it, he understands why his original version failed to gain traction. “I go back and look at that now and I just think I didn’t know what I was doing, and I get why no one wanted it,” he says.

When finishing his commitments for other projects, Crego says his wife suggested he revisit the project. “I was like, ’Yeah, but I can think of something fresh! I need something new,’” he says. But revisiting it with new skills and a fresh perspective revealed the project’s potential. ”I kind of realized I never really fleshed it out the way that it could have been fleshed out,” he says. ”And then I just fell in love with the world again, and the characters again, and really started to build the journey out.” 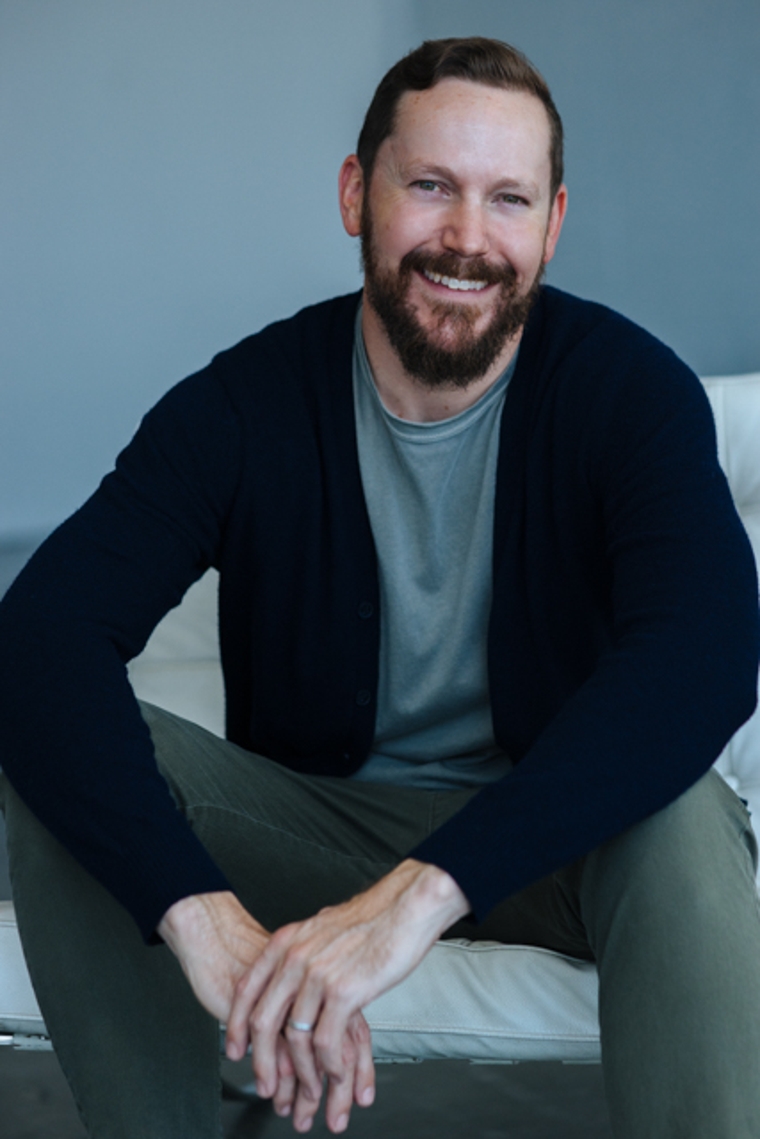 The movie kicks things off with Arlo, voiced by singer and American Idol contestant Michael J. Woodard, set adrift at birth in a basket that floats downriver until it delivers him to the swamps of Louisiana, where he’s taken in by kindly Edmée, voiced by Annie Potts. Arlo grows up happy until Edmée reveals the truth about Arlo’s origin and his parents, prompting him to leave home for New York City in search of his real father, wealthy Ansel Beauregard, voiced by Crazy Ex-Girlfriend‘s Vincent Rodriguez III.

Along the way, Arlo meets friends and foes. The former include Bertie, voiced by singer Mary Lambert, a mountain of a girl with a heart to match; an oddball fur ball named Furlecia, voiced by Jonathan Ness of Queer Eye; cat girl Alia, voiced by Haley Tju; an elf with an Italian-American perspective on life, Teeny Tiny Tony, voiced by Tony Hale; and man-fish Marcellus, voiced by Brett Gelman of Stranger Things fame. Opposing them are Stucky, voiced by Jennifer Coolidge; and Ruff, voiced by the Red Hot Chili Peppers’ Michael “Flea” Balzary — a pair of low-rent entrepreneurs out to exploit Arlo for their own benefit. 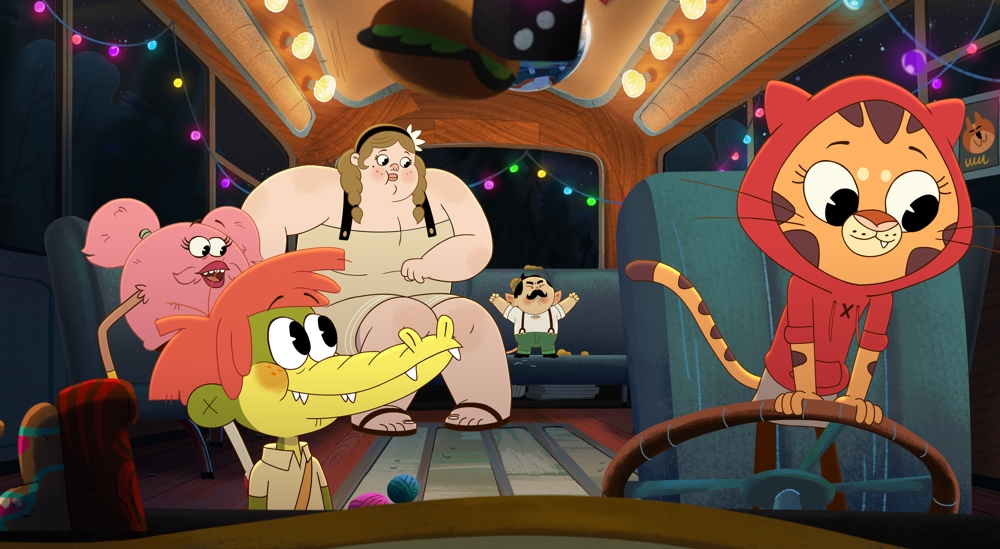 Crego’s revised pitch drew attention from Netflix, which committed to both a movie and the follow-up series, set to debut later in 2021. “Obviously, once you have someone believing in your idea, then it becomes a whole other thing — and it is infectious,” he notes.

Each character has its quirks, and Crego says he tried to put a little of himself into each one. “I tried to follow what I think is right — for myself and for people around me — and try to treat people with respect,” he says. ”But also I feel like a lot of the other characters are fairly broken and have a lot of deficiencies.”

Crego, who was a story artist on DreamWorks movies such as Shrek Forever After, Kung Fu Panda 2, Puss in Boots and Mr. Peabody & Sherman and went on to become supervising director on Sanjay and Craig and exec producer on Home: Adventures with Tip & Oh, says his personal experiences played into the creation of the characters. “I think a lot about my own life, growing up and going to L.A. and being in a big city and sort of discovering yourself and finding a home,” he says. ”I think it really is sort of a story about, can you keep your purity and your senses and remain good in the face of all of these things that the world throws at you — and beyond that, help people?” 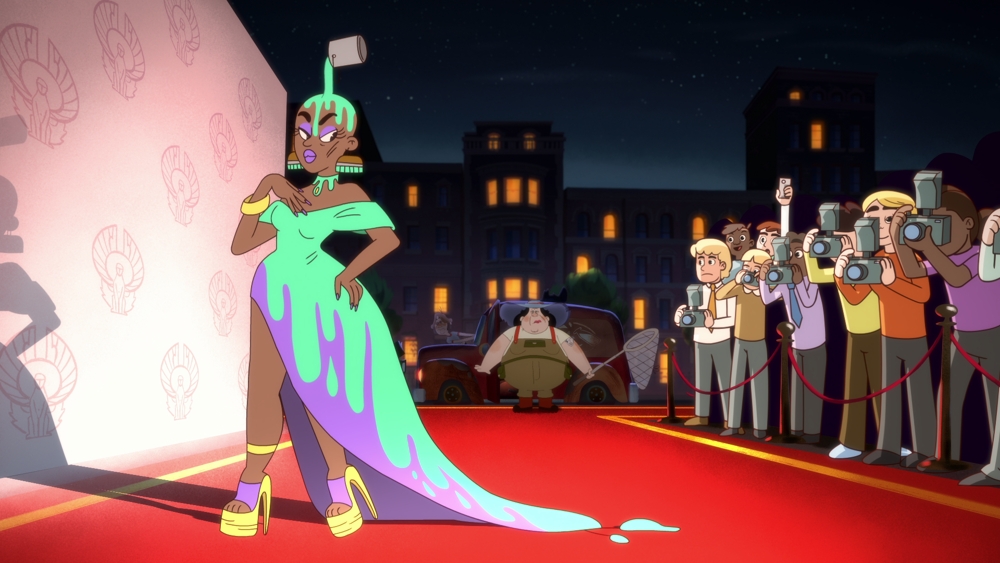 The relationship between Arlo and Bertie forms the core of the movie. “She needs him more than she knows,” he says. “She unfolds and lowers her barriers and lets him in, and he’s this character who just can’t not be good; he can’t not be positive. And then when he really needs her the most, when he’s the most damaged and broken, she’s there for him. And I think that kind of trade-off, of how friends and family members can really lift each other up, is a really special message.”

Casting also played a key role, with Crego saying he wanted to create characters with depth, while also leaving room for Lambert and Woodard in particular to find room to play versions of themselves, too. “I can’t really separate the people from the characters, in a lot of ways,” he says.

Crego early on pitched taking the animation production aspect to Titmouse, discussing with the studio’s execs Chris Prynoski, Antonio Canobbio and Ben Kalina the challenges of creating a 2D movie that looks like a feature and can be adapted to a follow-up series. “They kind of said, ’Look, if you really want the highest quality, if you want to make something that’s at a feature level, we’ve got to do it in house, because all of these departments have to talk to each other,” Crego says. “And the more we talked about it, the more that felt right.” 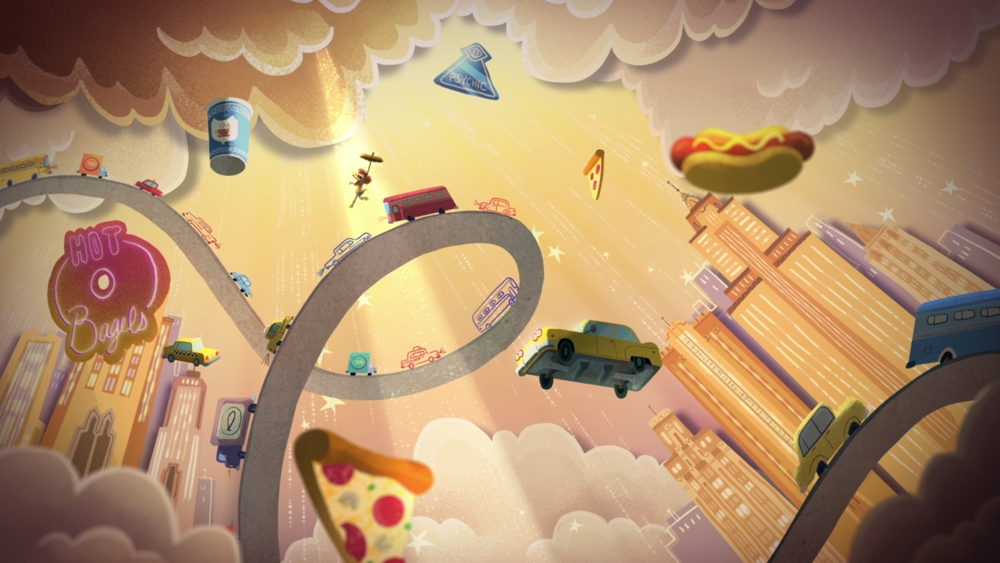 With the movie having a production home, Crego’s list of collaborators grew, starting with Clay Senechal, who co-wrote the movie. “He was a great sounding board and also just a really fantastic wordsmith and dialogue writer and really helped me kind of keep everything on track,” Crego says.

Crego also tapped into collaborators for character design, admitting up front that as a designer, he’s a great storyboard artist. Crego connected with art director Israel Sanchez through Netflix. “I knew that the world would be 2D, and I wanted something that was going to be classic in a way, but not necessarily derivative,” says Crego. ”[Sanchez] just has a fantastic style. A lot of the background design is really his taste and his pen.”

He also credits concept designer Hae Jung Michelle Park, character designer David DePasquale and additional art director Margaret Wuller, who helped elevate the look of the movie to a feature level. “We had this core team of artists that were plussing each other’s work and just trying to find ways to make it feel really deep and rich without breaking the style,” he says. 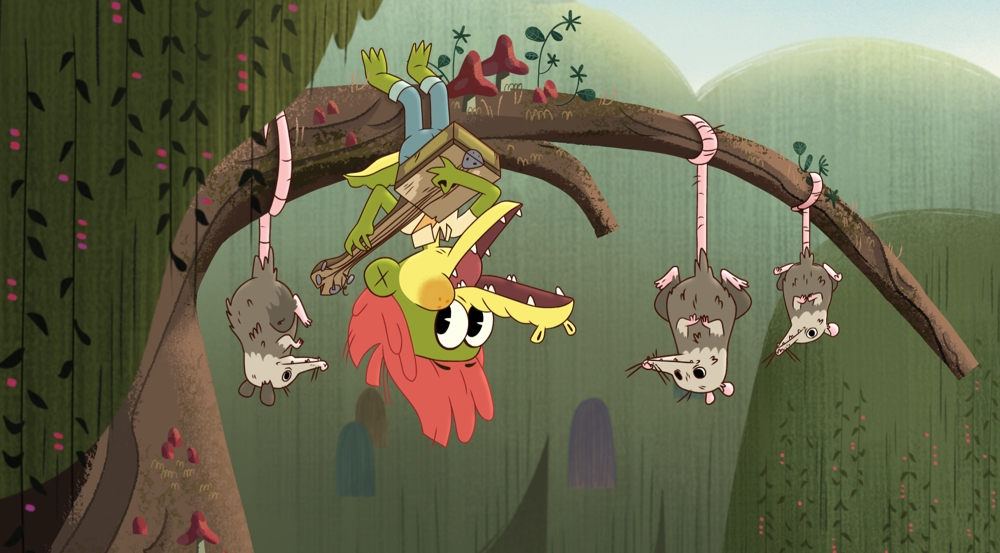 Getting the Band Together Again!

No discussion of Arlo the Alligator Boy would be complete without a dive into the musical element. The songs, written by Crego and Alex Geringas, propel the story forward with a modern pop sensibility and the kind of relentless, positive energy of Arlo himself. Crego drew on his past experience playing in bands around Los Angeles — a vocation he gave up as he focused on his animation career. At first, Crego asked Geringas, whom he’s worked with on the Home series for DreamWorks, to write all the songs, thinking he could just pitch the moments and serve as the bridge between Geringas on the music and Senechal on the script.

“That didn’t work, because he immediately, as we started talking about it, starts working in the room. And then we start talking and then we’re writing all of a sudden,” Crego says. ”He turned to me at some point in the process and said, ‘Hey, I’m not going to write the songs without you.’” 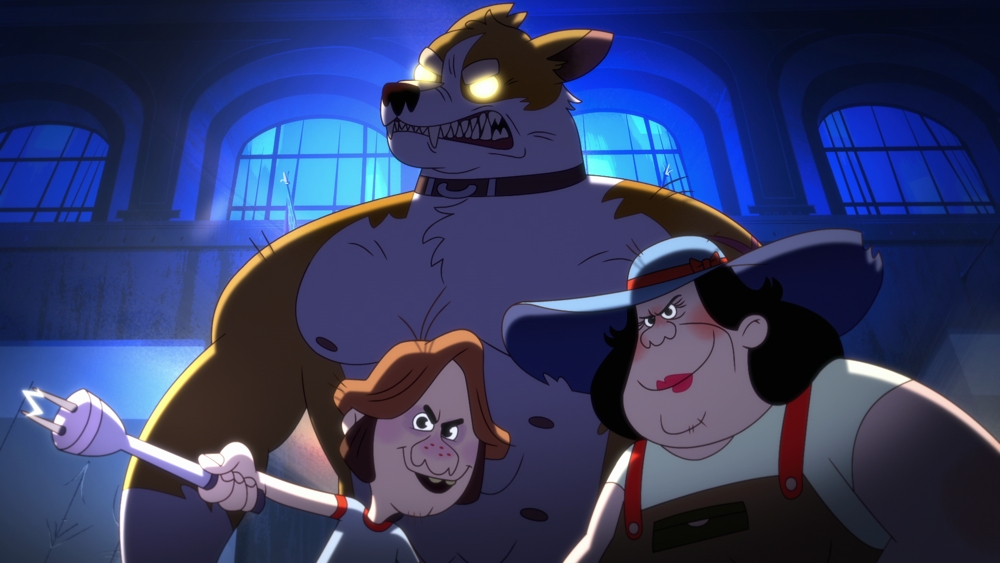 Together, they wrote something like 30 to 40 songs, with 10 of them making it into the movie and becoming essential to its storytelling. “It became obvious, I would say, after the first screening that the music was just the best part of telling the story,” he says.

With the feature’s debut set, Crego and crew have moved on to working on the series, which will follow later this year. Crego says the ending of the movie leads directly into the series premise, which he describes as more like a sitcom.

”You’ve got all these really fun, extreme personalities, and now they’re at home in their little neighborhood making a life for themselves,” he says. All of this is new for the characters, and it gives the writers a lot to play with. ”My favorite episodes of the series so far are the ones where the least happens.”

Meet Our Rising Stars of Animation 2021
It’s the End of the World as They Know It: The Making of Sony’s ‘The Mitchells vs. the Machines’