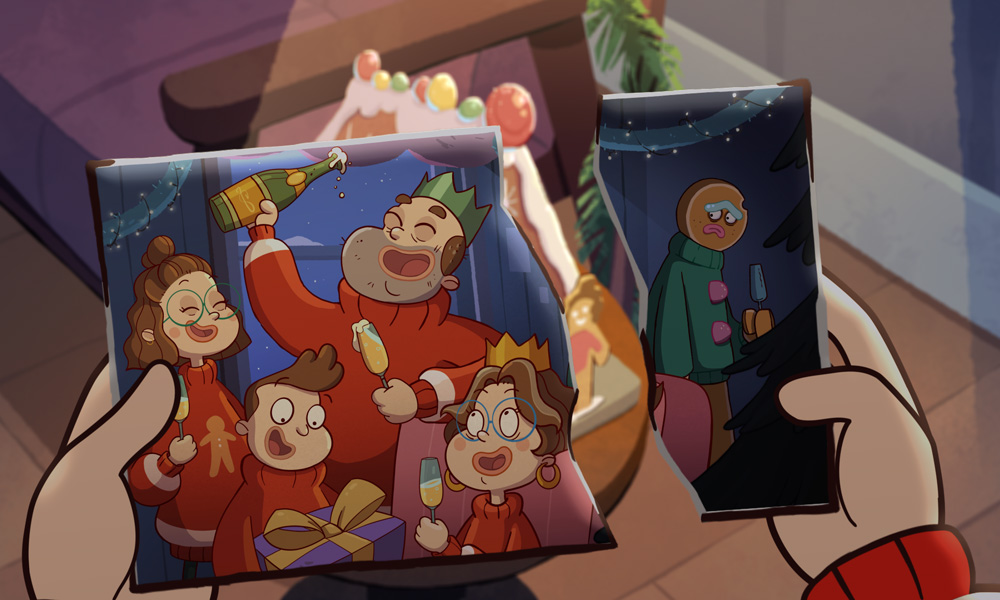 Let's Not Go Away

The latest project from U.K. animation studio Blue Zoo’s BAFTA-nominated shorts program is waiting to be unwrapped. Created as a music video for Scouting for Girls, this year’s Christmas-themed short Let’s Not Go Away was helmed by first-time director Katie Gascoyne, Blue Zoo’s Recruitment & Talent Coordinator. While it’s the first to be directed by an admin team member, it’s the program’s 12th project in its boundary-breaking shorts program.

Scouting for Girls themselves chose Gascoyne’s idea to bring their Christmas single (debuting on their current U.K. tour and released by Sony Music alongside new album The Trouble with Boys).

“For me, this was an opportunity to tell a Christmas story with all the sweetness you’d expect, but a bit off-kilter,” Gascoyne explains. “Everything is as you’d expect. Young couple in love at Christmas, renting a crappy but well-loved flat in London, one of them dreading spending Christmas day with their other half’s family. Except in this scenario, the boyfriend is a living gingerbread man, and her family have a bad habit of nibbling him when she’s not around. Needless to say, he’s not looking forward to another holiday with them.”

“There’s a run-in with some robins, a (ginger)breadcrumb trail and a super sweet romantic gesture on top. At its heart, it’s about leaving obligation behind and spending Christmas with the people we choose to.”

Emmy-winning songwriter David Freedman worked with his son, Jackson Freedman, to write the heartwarming original song performed by the enduringly popular Scouting for Girls. The band’s song list includes mega-hits like “She’s So Lovely,” “This Ain’t a Love Song” and “Heartbeat.”

“Every year we make something funny and Christmas related, and this song was hilarious, cheeky and also incredibly sentimental,” says studio co-founder and EP Oli Hyatt. “We got cracking right away with an in house competition for an animated short film to go with the song. Anyone can enter, and Katie from HR won with a sentimental concept, just this side of weird. This was the perfect chance to create a short film in our recently opened 2D studio.”

“I’m so beyond grateful for the opportunity to tell this story, and to direct a short film. This wouldn’t be possible anywhere else but Blue Zoo,” notes Gascoyne. “It’s incredible how much the studio has supported and trusted me as a director for this production — and that’s not just a superfluous title, I really did get to direct it! I’m absolutely blown away by the talent of the 2D studio in the making of this short, and I’m extremely grateful to be part of the making of Blue Zoo’s first 2D Christmas short. I am endlessly amazed by what this studio can accomplish.”

Blue Zoo’s 2D studio opened earlier this year as part of the long-term strategy to diversify and broaden the studio’s content. Currently in production is 2D half-hour buddy comedy, Pony, aimed at kids aged 8-10. The series is created by Ant Blades, who will also direct the series. The show currently has an order for 20 half-hour episodes from Nickelodeon.