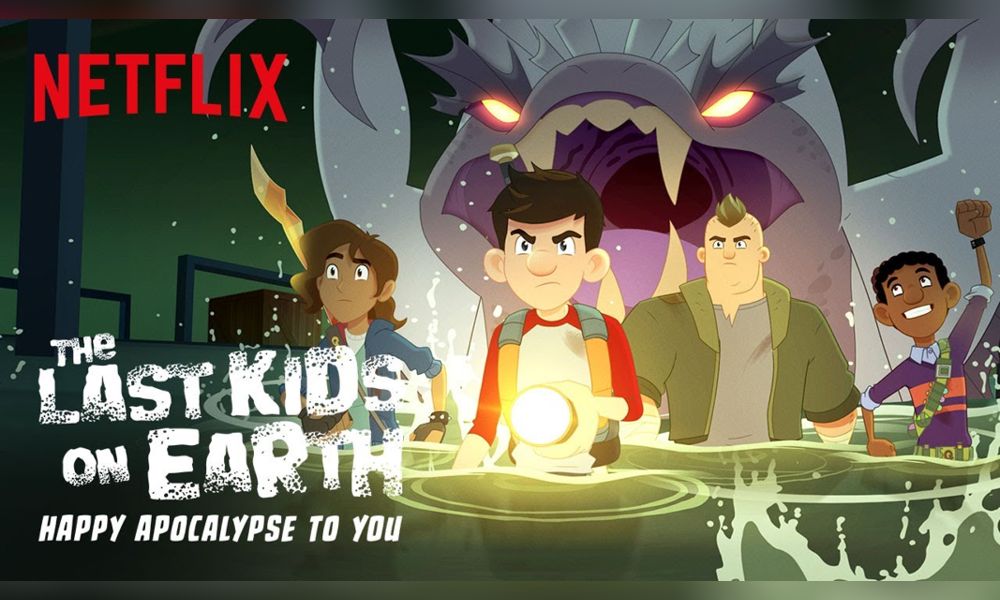 Atomic Cartoons, the Kids and Family Division of Thunderbird Entertainment, and Penguin Young Readers, along with creator Max Brallier, are proud to announce two new milestones in The Last Kids on Earth franchise: An interactive special episode of the Daytime Emmy Award-winning animated series will begin streaming April 6 on Netflix. On the same day, The Last Kids on Earth: Thrilling Tales from the Tree House, the first-ever graphic novel in the bestselling series, will also hit store shelves.

In the interactive special, titled Happy Apocalypse to You, when Jack, Dirk and Quint try to throw June a birthday party, it turns into an action-packed thrill ride. Viewers will use their remote controls to decide what the gang will do as they encounter angry wretches, ferocious maulers, fearsome octogrutes, zombies and more, on the way to the birthday extravaganza. This is a chance for fans of the series to help make June’s birthday a blast, but not get eaten in the process. To produce the interactive episode, Atomic leveraged interactive Netflix technology that requires viewers to make choices using their remote control to advance the story.

“With audiences calling the shots, we can’t wait to see what kind of adventures – and calamities – they’ll cook up for Jack, June, Quint and Dirk in this thrilling interactive special episode of The Last Kids on Earth,” said Matthew Berkowitz, Chief Creative Officer of Thunderbird and Atomic Cartoons, and Series Executive Producer. “We have been so honored by the response our series has received so far, and we’re excited to see how fans of The Last Kids on Earth enjoy having the power – and responsibility – of deciding the fates of their favorite characters on screen!”

In the debut graphic novel, Thrilling Tales from the Treehouse, the kids and their monster buddies are hanging out in their tree house, when Jack launches into an epic, totally-heroic, super-rad story of one of his many post-apocalyptic adventures. Of course, after he’s finished, everyone’s eager to one-up his tale with a story of their own. Soon, Quint, Dirk, June and Skaelka, and even Globlet, regale the group with sometimes outrageous, often hilarious details of their action-packed escapades during the Monster-Zombie Apocalypse.

“The behind-the-scenes journey that brought The Last Kids on Earth to life on screen has been incredible. And now, together with Atomic Cartoons, we’re taking another exciting step forward, giving viewers the power to control the destiny of their favourite characters,” said Brallier, author of the book series and creator of the animated series. “And being able to time the streaming premiere of our new interactive episode with the launch of the next book in the series, means we’re able to offer fans a double whammy of excitement, laughter and – of course – zombies and monsters.”

The Last Kids on Earth is a New York Times and USA Today bestselling book series. The IP was acquired by Thunderbird Entertainment in 2017. The animated Netflix series debuted in September 2019 with a special 66-minute episode that went on to win a 2020 Emmy Award in the category of “Outstanding Special Class Program.” Season 2 began streaming in April 2020, and Season 3 launched in October 2020. The series features a star-studded voice cast, including Mark Hamill, Rosario Dawson, Catherine O’Hara, Keith David, Bruce Campbell, Garland Whitt, Montse Hernandez and Charles Demers, in addition to Nick Wolfhard voicing the lead character Jack Sullivan.

The franchise also has launched a toy and merchandise line based on the series with Jakks Pacific, and a t-shirt line with Hot Topic. A video game based on the series, The Last Kids on Earth and the Staff of Doom, is currently in production with Outright Games, set to launch in June 2021. (Trailer.)

Atomic Cartoons is an artist-driven, multifaceted studio with locations in Vancouver, Ottawa and Los Angeles producing content for partners around the globe, including the Emmy Award-winning series Beat Bugs (2017, 2019) and the Peabody Award and Television Critics Association Award-winning Molly of Denali (2020), which also won a Kidscreen Award for Best Inclusivity (2021). Thunderbird and Atomic also have a division dedicated to global distribution and consumer products.