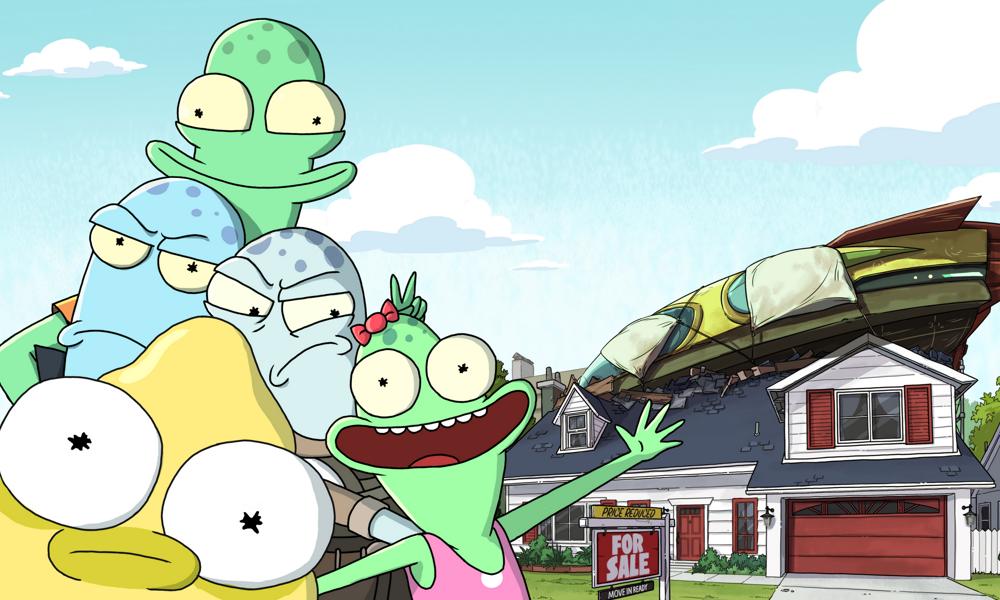 Misfit aliens from space trying to adapt to life on Earth have been a popular staple of sitcoms such as My Favorite Martian, ALF and 3rd Rock from the Sun. This spring, a new brood of aliens make their impressive debut in Hulu’s Solar Opposites, the hilarious new animated offering from Rick and Morty co-creator Justin Roiland and former head writer Mike McMahan (Star Trek: Lower Decks).

The series, which overflows with the inspired lunacy you might expect from the madmen who gave us Rick and Morty, follows a team of four aliens who have crash-landed into suburbia after escaping their exploding home planet. Two of them, Korvo (Roiland) and Yumyulack (Sean Giambrone) believe their new home is awful and polluted, while the other duo Terry (Thomas Middleditch) and Jesse (Mary Mack) love humans, their junk food and pop culture.

Roiland, who won an Emmy in 2018 for executive producing Rick and Morty (and yes, he also voices both Rick and Morty for that hugely popular show) tells us that he had the idea to center a show on a pair of odd-couple aliens about 14 years ago. “At some point, it was going to be a live-action series, but it never happened,” he recalls. “Mike McMahan and I were trying to develop another show, between the second and third season of Rick and Morty, but everything we did felt really laborious. So, we decided to put that other idea down and try the odd-couple alien pitch again … and then, once we went back to the original premise, everything became very easy.” 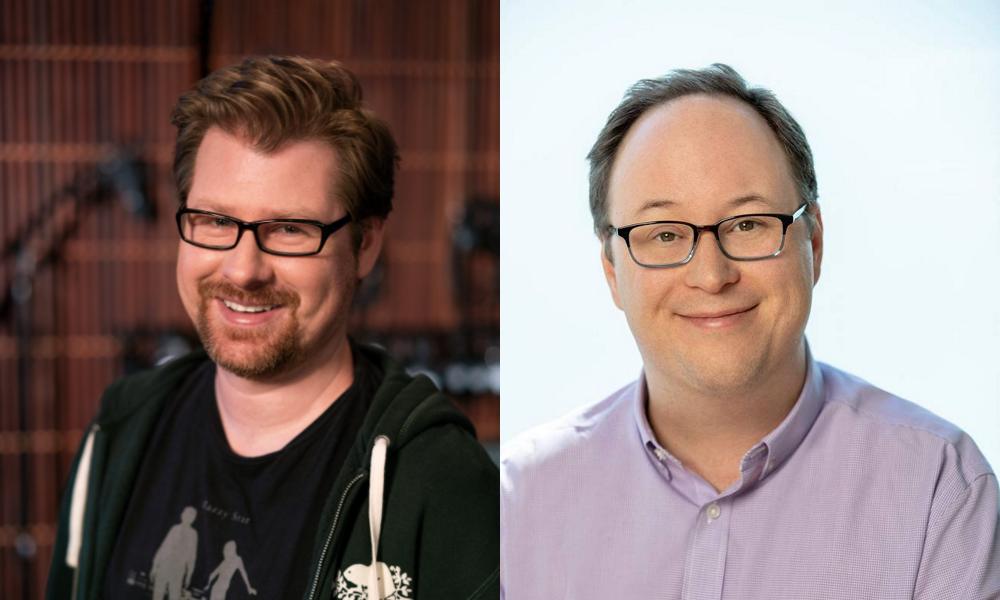 “Justin has all these books of random sketches and ideas from years past,” says McMahan. “We flipped through them and landed on a rough drawing of Terry and Korvo, which we used as the inspiration to build out the family. I was a new dad at the time, so I added the kids/replicants and the baby/Pupa character, we were going for a classic sitcom/FOX look from afar, which would get weirder the closer you looked. The tone we wanted to hit was ‘funny and fun over everything else at all times,’ which you can still clearly see in the finished show.”

McMahan and Roiland then put together the story for the pilot, which is very close to the final version that viewers will get to see on Hulu this month. “We originally had interest from Netflix and Syfy, but those didn’t happen, and then Hulu stepped in,” says Roiland. “We then added [exec producer/writer] Josh Bycel (American Dad!, Happy Endings) along, and things really got moving. It was a lot of work, but everyone is really kicking ass — and it’s been a lot of fun, too.” 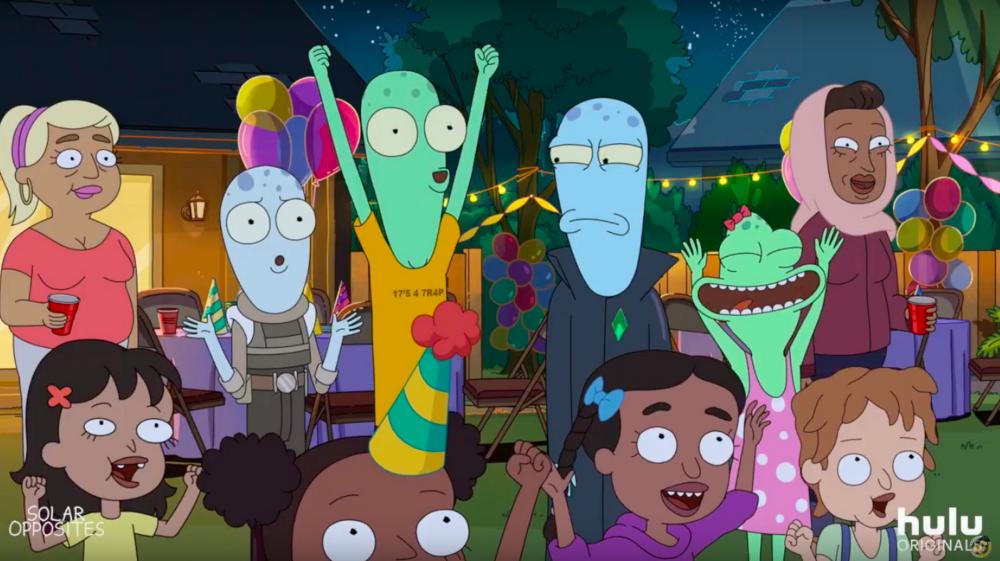 Roiland says he and McMahan had a great time brainstorming about the aliens, their weird biology and how they interact with the world in unexpected ways. For example, whenever they get stressed, their bodies begin to emit little creatures that look like a hybrid between a giant virus and a pink booger (they’re called gooblers).

“It’s funny to think about humanity from the perspective of alien beings,” says Roiland.

“We are going to have lots of fun with the gooblers, but I can’t tell you more about it because we don’t want to ruin the joke.” 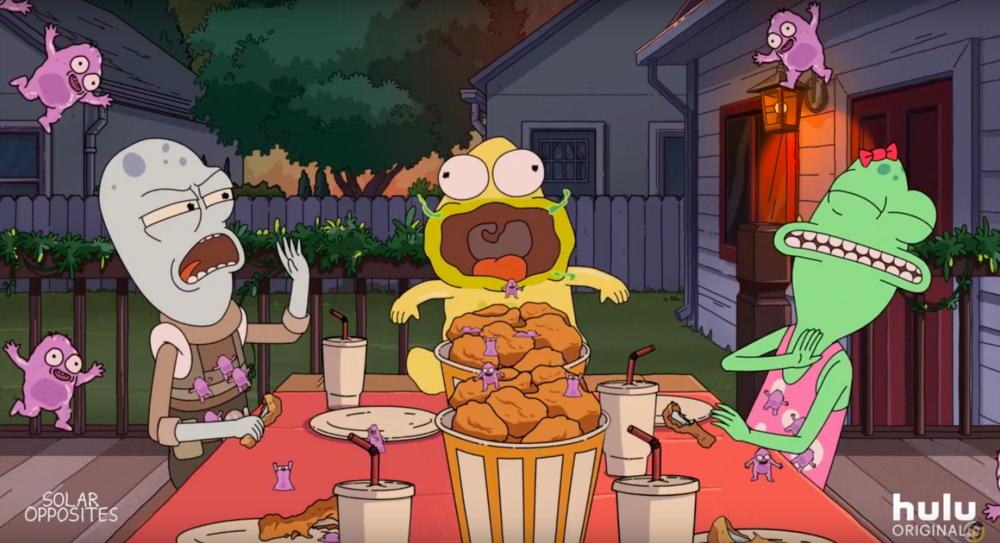 Overall, both Roiland and McMahan say the show is a bit sillier and looser than their other collaboration, Rick and Morty. “Our process of writing and producing is quicker, but we still strive for the same level of humor and surprises. We have so many ideas about how these aliens survive on the planet. But when you think about it, it’s really an immigrant story,” Roiland points out. “These characters are very new to their environment, and we get to have fun by looking at things we take for granted and build jokes and sketch storylines around those ideas.”

McMahan says one of their biggest challenges was to always keep the comedy and the tone of the show as light and fun as possible, even when pouring their efforts into making sure everything was professionally executed. “It’s easy for a show to become ‘right,’ but also lose the frivolity that made you like it in the first place. Solar Opposites is always a balancing act between, ‘we have to make a really good, emotionally solid TV episode’ and ‘let’s do some crazy, effed shit that makes us laugh. I’m really happy with how the first season ended up in that regard.”

Juggling Toons
Looking back at the past few years, Roiland says the big challenge was juggling the production of Solar Opposites, all of his Rick and Morty duties and launching his own gaming studio Squanch Games in 2016. “Everything was happening at the same time,” he says. “But luckily I had an amazing team. Mike and Josh were amazing and did a great job of running the room day to day. It’s the old adage: You have to surround yourself with talented people and get out of their way. We are having so much fun with this show and our voice cast brings so much to the table: They truly embody the characters and add some hilarious improv material to the show, as well.”

Roiland, who says he was hugely influenced by shows such as The Simpsons, Beavis and Butt-head, Ren & Stimpy and Liquid Television when he was younger, says fans could see a possible appearance by Rick and Morty on Solar Opposites in the future. “In an infinite multiverse, everything is part of the multiverse, so they could easily be a couple of realities away,” he says.“I have no idea how you would navigate the IP waters, but that would be really friggin’ cool!” 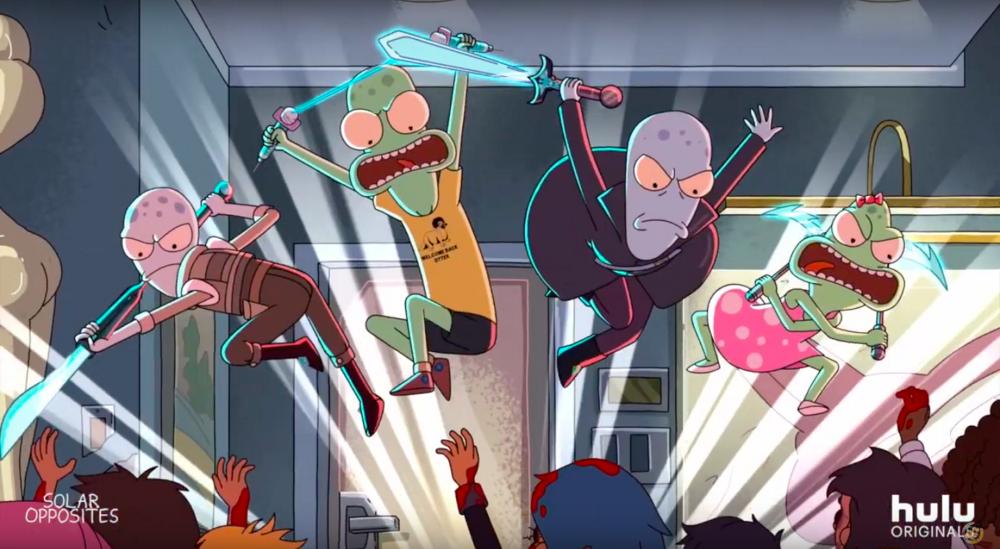 “Our initial pitch to Hulu always included a heavily serialized element, so there’s a big part of the show that’s always been designed to be binged,” adds McMahahn. “I’ve never worked on a serialized animated comedy, and I don’t see a lot of them, so I heavily nerded out that we got to make a serialized show along with a goofball comedy. What you see on the screen (in that respect) is exactly what I wanted it to be from conception through execution, which is a rare treat for a creator. Also, the art team and the voice actors are insanely talented, everyone gave it their best, and you’ll see that the first season is something special.”

Roiland says he hopes the audience will get some entertainment and some happiness by watching his new show. “Things are pretty sad out there in the real world, so we hope Solar Opposites and new episodes of Rick and Morty will offer people a little bit of distraction.”

“I hope audiences will sit down to watch a show about crazy funny aliens, and then be surprised as they keep watching how serialized and thought-out everything is,” adds McMahan. “In any other time, this show couldn’t exist. To me, the only reason a show should exist on Hulu (or any streamer) is because it feels like a miracle, like you can’t believe what you’re watching. Sometimes that feeling comes from a cancelled show being resurrected. For Solar, it’s the jokes, language, what we can show on screen (Solar is TV-MA, which is crazy what you can do) and the serialized elements. Somehow, this show feels like a classic, broad network sitcom and like an insane cable show that fell out of another dimension, all at the same time.”

Solar Opposites (eight episodes) premieres on Hulu on May 8. Work has already begun on the second season for the series. 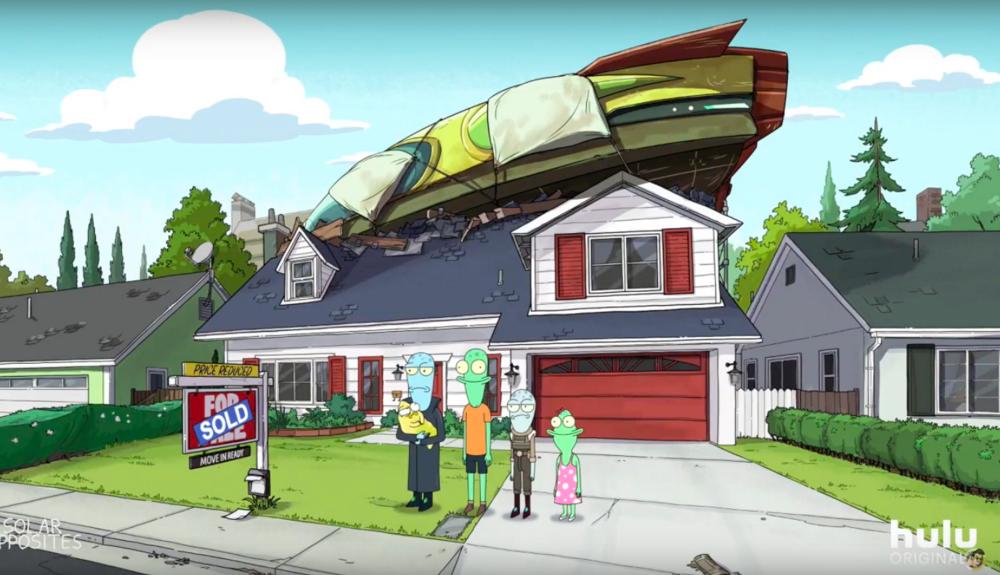