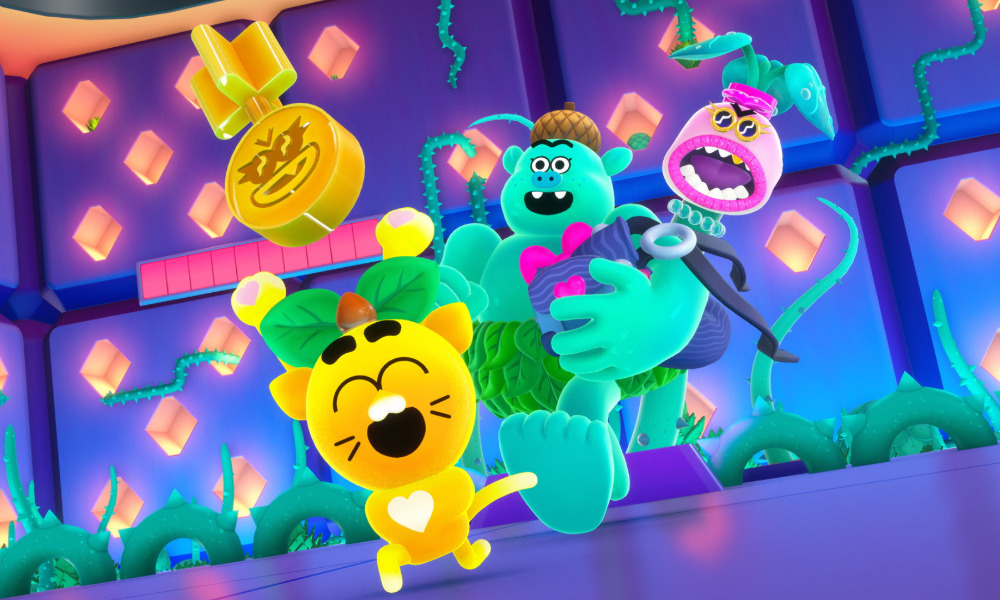 As recent offerings such as Black Mirror and last month’s Cat Burglar have proven, we are just beginning to scratch the surface of what we can expect in the brave, new world of interactive at-home entertainment. This month, the new children’s series Battle Kitty, which is based on animation veteran Matt Layzell’s popular Instagram toon The Adventures of Kitty & Orc, ups the ante even more. In the show, our main characters Kitty and Orc have to battle monsters and beat their rivals to move around the wild world of Battle Island. Of course, the kids at home can help them unlock new paths and layers in this futuristic/medieval universe. 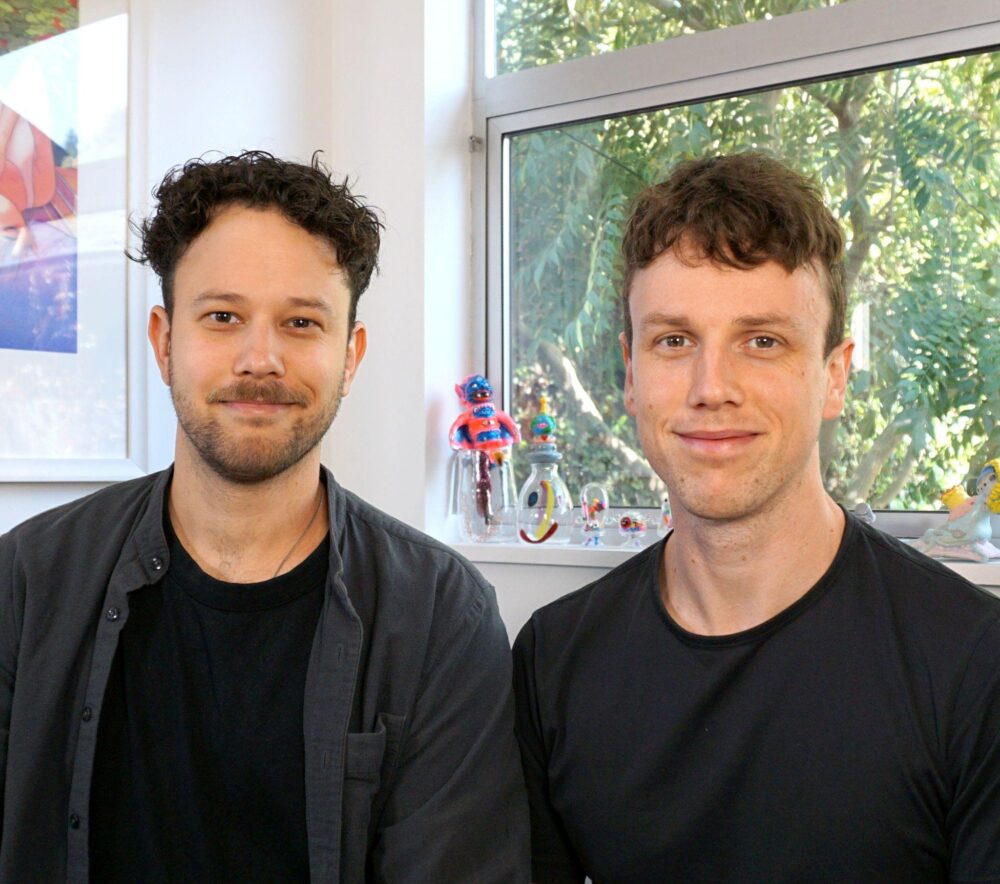 “The show is based on a series of animated shorts I did for my Instagram during my spare time, just for fun,” says Matt Layzell, who has worked on shows such as Pinky Malinky, Sanjay and Craig and Apple & Onion. “The more of them I made, the more I fell in love with the characters, Kitty and Orc, and it seemed like they could make for a cool show. “

His brother, Paul Layzell (I Love You, America; Apple & Onion) is the show’s supervising producer. As he tells us, “Matt and I worked on developing a wider world for Kitty and Orc to inhabit and pitched that, along with Matt’s shorts to a number of studios, and Netflix picked it up for development.” 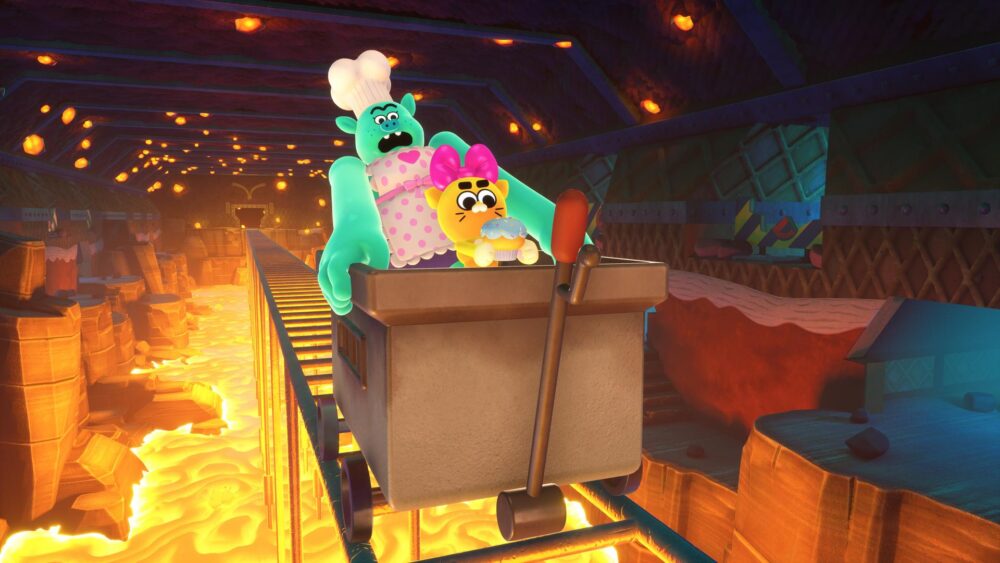 Viewers help guide the heroes on their quest to defeat monsters, collect keys and make Kitty a Champion of their futuristic-medieval world.

The creative siblings began work on the project about four years ago. “We were very lucky to be part of Netflix Animation just as it was starting up, so there weren’t many people there, which meant things were moving really quickly,” recalls Matt. “Everyone was super supportive and eager to get our shows up and running, so there was a lot of trust and a really cool ‘yes and’ kind of vibe at the studio. It was like working at a small independent start-up, but with the backing of a massive, successful company!”

The Layzells love the world of video games and they tell us that they were quite excited about using Unreal Engine to make their show. “It’s an amazing tool for producing animation and helped give the show that authentic video game feeling that we wanted,” says Paul. “Unreal Engine has some really interesting features that can be leveraged to make the whole TV animation pipeline more efficient and conducive to directors, real-time rendering being a big plus,” adds Matt. “I don’t think it’s the norm yet, but I’m excited to see how other productions will use it in the future. 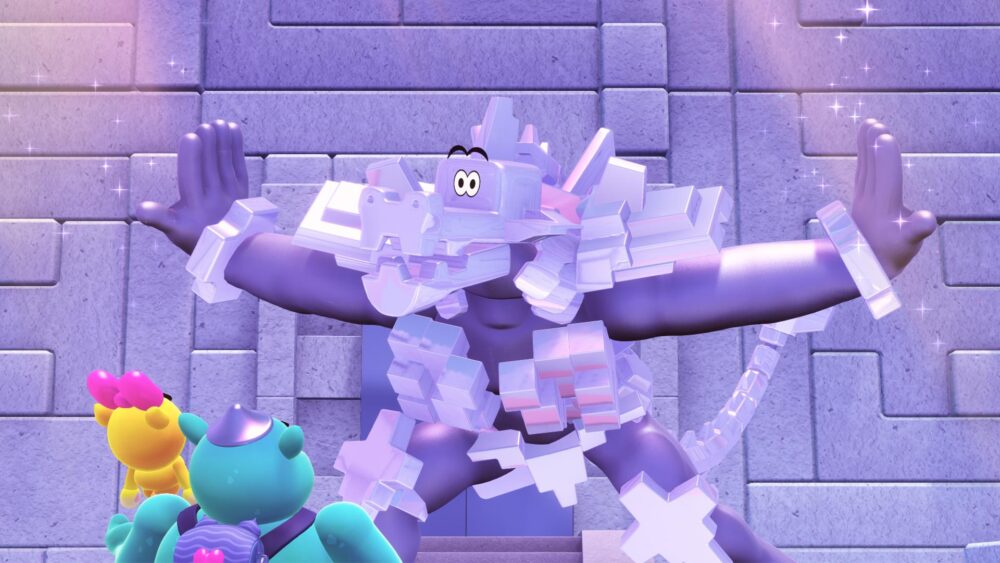 Battle Kitty relied on the talents of about 250 people in total — that’s including pre- and post-production team. The animation was produced by Sydney-based studio Plastic Wax, led by Nathan Maddams. “It was an absolute joy to work with them,” says Matt. “It was a great creative fit and they really poured their all into the show. They’ve got tons of experience using Unreal and totally understood the language of the video game aesthetic we were after, and had the most amazing character animators who totally got the sense of humor and comedy.”

Paul mentions that Plastic Wax had made a lot of super realistic, and often gritty, cinematics, so it was fun for the brothers to provide them with cute, colorful and (comparatively) simple models to play with. “Their artists added so many details that just made the show shine and showed just how much pride they take in their work,” he notes. 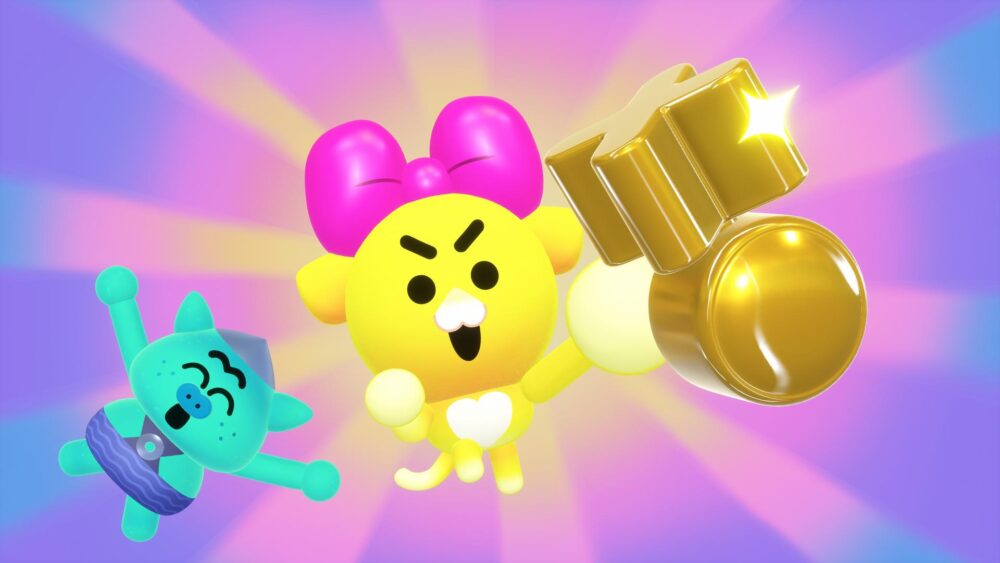 Matt says he loves the show’s two main characters Kitty and Orc. “I think they really represent both sides of my personality, and hopefully everyone else can relate, too,” he explains. “I feel like everyone has a feisty, energetic Kitty in them somewhere, but also a shy and sensitive Orc somewhere in there, too. I just love acting those two out, I love their dynamic, and just watching them go.”

Paul gives props to the show’s “amazing soundtrack” by Max ‘Maxo’ Coburn. “Matt and I are huge fans of his, and he really brought a special energy to the show,” he notes. “I also love the core themes of Battle Kitty — love, friendship, two friends traveling to a distant land to discover their potential. It really resonates with me. I see parallels with our own experience, leaving the U.K. to pursue our dreams in Los Angeles, subconsciously embedded in that story.” 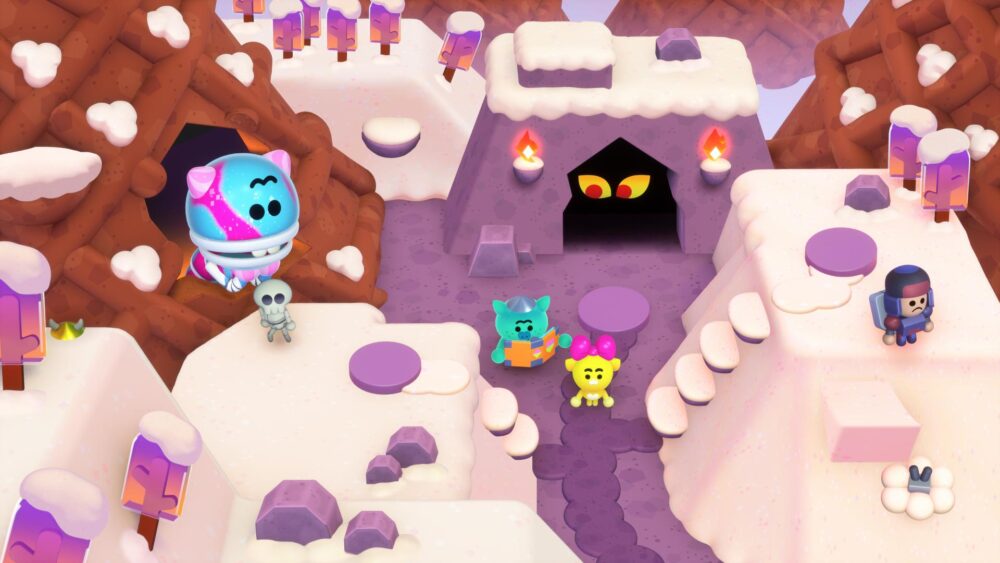 The overall look of Battle Kitty was inspired by some of the Nintendo games that the brothers played when they were younger (and continued to be obsessed with as adults). Mike says, “A mantra we would often repeat to ourselves was ‘this show should feel like playing Nintendo games on summer break!’”

Of course, what makes the show quite different from game-influenced children’s content is its special interactive qualities. As Paul explains, “When you click on Battle Kitty you’ll enter the interactive world map of ‘Battle Island’, where Kitty and Orc’s adventures take place. Instead of choosing episodes from a list, as you normally do on Netflix, you will be able to select adventures from the map. It’s a lot like a video game ‘overworld map’ that you see in games like Super Mario World, for example, with little characters running around and different areas to explore.” 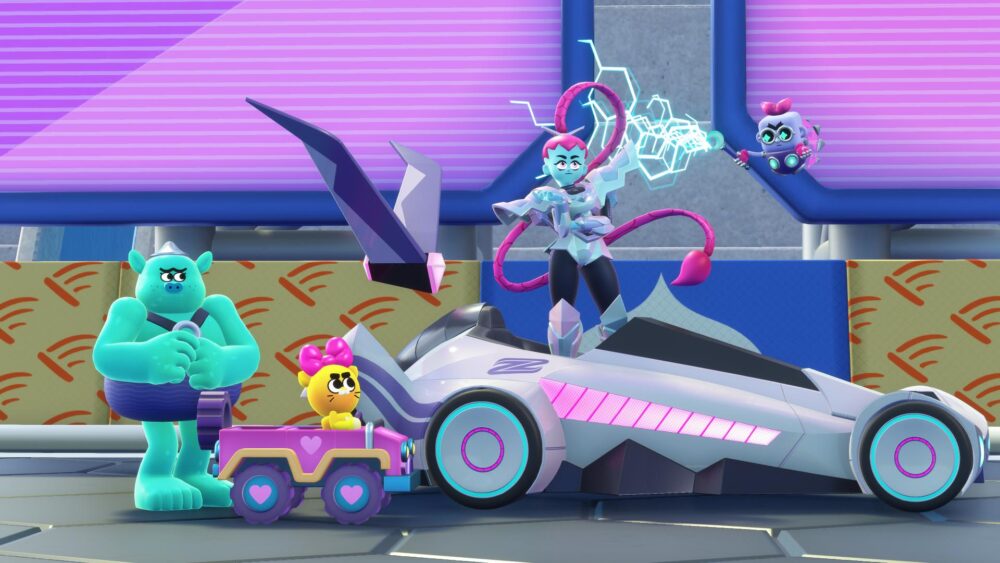 Instead of selecting a ‘level’ to play, the viewer will have to pick an episode. Watching some episodes will unlock different sections of the map and progress the viewer towards the final ‘boss’, while others will unlock short ‘bonus episodes’ that are hidden on the map. “It was amazing working with the Interactive team at Netflix, we pretty much got to design a video game at the same time as making a show, which was exhausting at times but also a total dream come true,” says Paul.

“We had to face the challenge of maintaining that environment during a period of time with much upheaval,” adds Paul. “During production, we moved our studio across town, we saw a much needed movement for social and racial justice, the air was filled with smoke from wildfires (both in California and Australia), not to mention the little old pandemic which meant many of us were working isolated at home. I think it’s testament to our amazing crew and leadership that we managed to make Battle Kitty at all!” 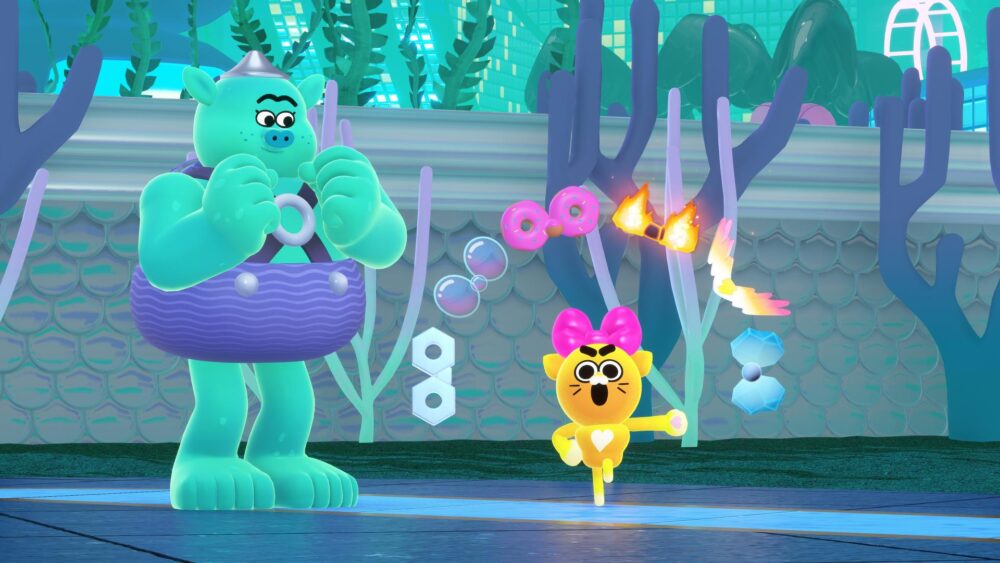 The brothers mention Hayao Miyzaki, Shinchiro Watanabe, Kasuhiro Otomo, Sally Cruikshank, Isao Takahata and Genndy Tartakovsky as some of their animation idols and influences. Matt adds, “And Craig McCracken, who we actually got to work alongside whilst he was making Kid Cosmic. It was so wild to have him watch early pitches of Battle Kitty and give feedback, as so much of his work has influenced us.”

At the end of the day, the Layzells hope their show will inspire kids to get through the challenges in their lives with an open heart. “We love underdog stories and love that Kitty is always punching above their weight,” says Matt. “We want to show kids that even if you feel like the odd one out, or like the smallest person in the room, that you can be proud, be yourself and get through adversity. I think Kitty and Orc’s love for each other shows you that love and friendship can get you through anything. Hopefully kids will be able to see themselves in both Kitty and Orc, and know that if Kitty and Orc can make it through all the challenges of Battle Island, they can make it through whatever challenges might face them!”

The Layzells on the Interactive Frontier:

Matt: “Coline Gattolin, an amazing member of the Netflix Interactive team, put it in a way I always think of; that interactivity is a sliding scale — with totally passive content on one end (a normal TV show you sit and watch) and completely interactive on the other end (something like Minecraft). And a piece of art can sit anywhere on that scale. There are some video games that have a lot of cutscenes and guided sections (passive elements) and now we’re seeing passive forms of entertainment (TV and movies) include more interactive elements. I think we’re still in a time of experimentation, and Battle Kitty is a really exciting experiment that we hope pays off!”

Paul: “We’re in a time where it feels like game designers want to be storytellers, and filmmakers want to make games (see Hideo Kojima’s sweeping cinematic epics, or J.J. Abrams’ Bad Robot Games). Perhaps it’s always been that way, but I feel like we now have the tools to see what that looks like in real terms. It’s a time of experimentation for us creatives to see where the perfect spot on that sliding scale may be, but I also think there’s still plenty of room for purely compelling storytelling and purely satisfying games.” 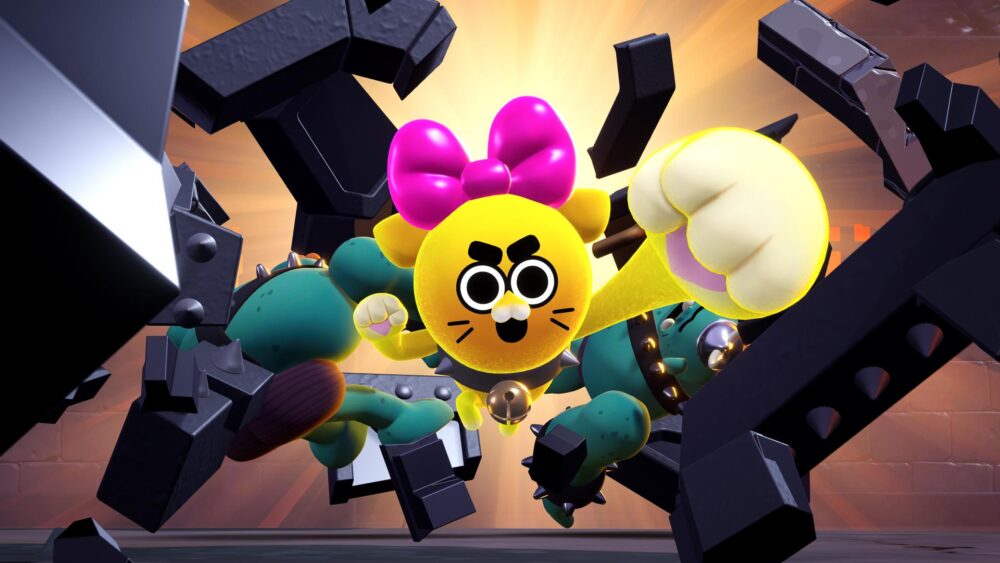