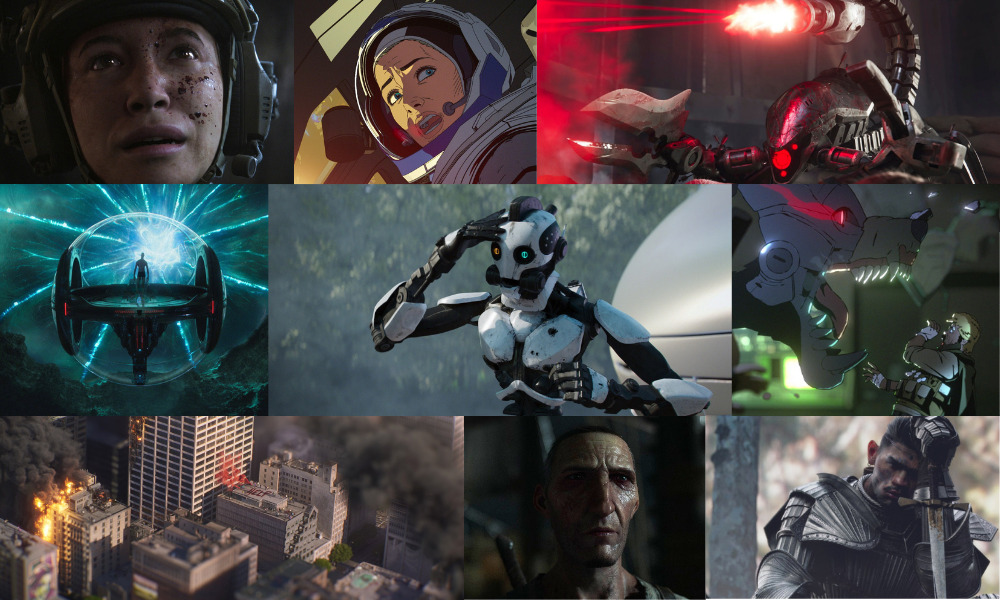 The third season of Netflix’s multiple-Emmy-winning series Love, Death + Robots offers only nine episodes of various lengths, but it also delivers some of the anthology’s most sophisticated and eclectic shorts.

We have the return of the beloved characters introduced in the first season’s Three Robots, who are continuing their journey on our post-apocalyptic planet. There’s an original and thrilling sea-faring episode (Bad Traveling) about an unforgettable monster, directed by live-action master David Fincher (Se7en, Mank, Zodiac), who is an executive producer on the series. Volume III also includes the jaw-dropping and visually stunning Jibaro by Alberto Mielgo (the man behind this year’s Oscar-winning short The Windshield Wiper and Volume I’s The Witness). The anthology’s creator and exec producer Tim Miller also returns with Swarm, a remarkable adaptation of Bruce Sterling’s novelette about an unusual hive-like form of life on an alien planet. In short, some very high-flying episodes and glorious eye candy are on the menu! 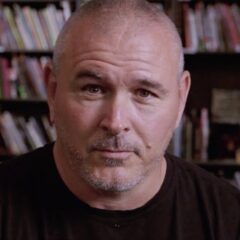 “One of the biggest [announcements] about the third season is that David Fincher has directed his first animated film,” says Miller, the founder and creative director of Blur Studio, who came up with the idea for the anthology more than a decade ago and pitched it all over town until Netflix came on board. “It’s everything you’d think it would be, and it really delivers on the promise. I think it’s one of the most horrifying and gripping films he has done. It’s just his style — and the tone of the piece goes back to Se7en.”

Miller, an Oscar-nominated director (Deadpool, Terminator: Dark Fate) and producer (the two Sonic the Hedgehog blockbusters) who is a huge fan of science fiction stories, says it’s hard for him to say what makes the third season of the show stand out from previous ones.

“I think that this one has some really beautiful stories,” he notes. “It’s difficult for me to say that any one is different from the others. We kind of just make the best version of what we think we can create. I can’t say that this year’s The Very Pulse of the Machine is better than Pop Squad. I can’t make that choice. I cry when I see both of them … People that have seen the third season tell me that it’s a little darker.”

The Very Pulse of the Machine

Volume III also showcases the talents of the amazing Jennifer Yuh Nelson, the Oscar-nominated DreamWorks veteran who directed Kung Fu Panda 2 and 3 and has been the show’s supervising director since season two. “The third season episodes took a bit longer to cook,” she points out. “David Fincher’s episode is quite ambitious; it’s about 20 minutes long and the longest one we’ve ever done. Alberto Mielgo started working on The Witness from the very first day. Then he won an Emmy for it, then won the Oscar for his short. He said Jibaro was the most ambitious thing he’d ever done. For Alberto, it was being able to do something that he was almost afraid to do. And then, we also have the return of familiar faces with our Three Robots coming back [this time directed by Patrick Osborne], and also pushing the familiar faces beyond their comfort zone.”

According to Yuh Nelson, the episode The Very Pulse of the Machine took the longest to make. Directed by Emily Dean, it centers on a wounded astronaut who begins to hear a mysterious voice that may lead her to safety … or death. 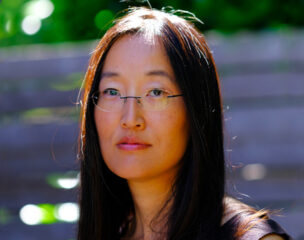 “This short was based on a prize-winning story by Michael Swanwick which had been in Tim [Miller’s] back pocket for a while, and he just knew he wanted to include it in the series,” recalls Yuh Nelson. “It’s a very bizarre, and yet strangely emotional story about a woman who is dragging her dead comrade on a sled and communing and tapping into some sort of other intelligence. Emily came in with such an amazing deck, filled with beautiful images — and really like a walking Moebius painting. The final version is very true to what she originally pitched.”

Both Miller and Yuh Nelson point out that each episode of the anthology is quite different from the others, not only because of the stories that inspired them but also because different teams and studios worked on each individual one. “In the case of The Very Pulse of the Machine, it took so long to make not because a massive crew was working on it,” says Yuh Nelson. “It was the case of a very small crew of very advanced professionals — rather than having a lot of people working on it for a shorter duration. That’s why you get such high quality in every frame. The people who worked on it really wanted to fit it in and work on it as a passion project.”

The new season also includes an episode titled Kill Team Kill, which is a full-on, traditionally hand-drawn work, directed by Yuh Nelson herself, with music by Grammy-winning dance artist Skrillex. “I think a lot of people miss that, and we had some of the best animators from all over the world working on it,” she recalls. “They got to animate a lot of veins and bullets and punches! It’s not meant to be taken seriously. It’s just a funny, dumb piece for people who want to get away from too many serious events in their lives right now.”

Swarm, the season’s stunning episode directed by Miller himself, is based on a story by Bruce Sterling, one of his favorite sci-fi writers. “I’ve been a fan for a long time and read his short stories and novels back in college,” he recalls. “That whole cyberpunk wave of science fiction really hit me hard and just resonated with me. The story takes place on a floating asteroid and it has many interesting creatures to animate. But at the end of the day, I love what it has to say about humanity. That we think we’ve got everything figure out, and yet we’re so dumb. As we move into an even higher gear, technologically speaking, I hope it makes people think that perhaps we should give it some thought before we take any big steps, because we don’t know what we don’t know!” 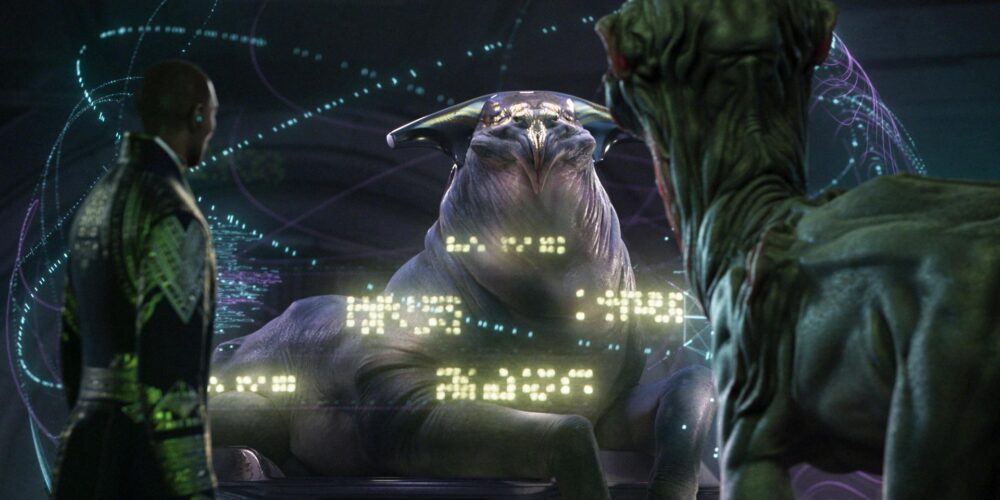 The Spanish Master Is Back!

Of course, one of the season’s not-to-be-missed episodes is Mielgo’s Jibaro, which centers on a deaf knight who becomes mesmerized by a golden woman who lured his companions to their deaths.

“This piece is an homage to nature, as everything is in a fully natural setting,” Mielgo explains. “So, I prepared for this project by traveling all across America’s West Coast. We were in full pandemic mode, so I just took the van out in the fall of 2020. I wanted to capture the end of summer, early autumn colors, where the green colors are fading but you don’t have full orange or full yellow foliage. I was collecting visual references and getting lost in all the forests.” 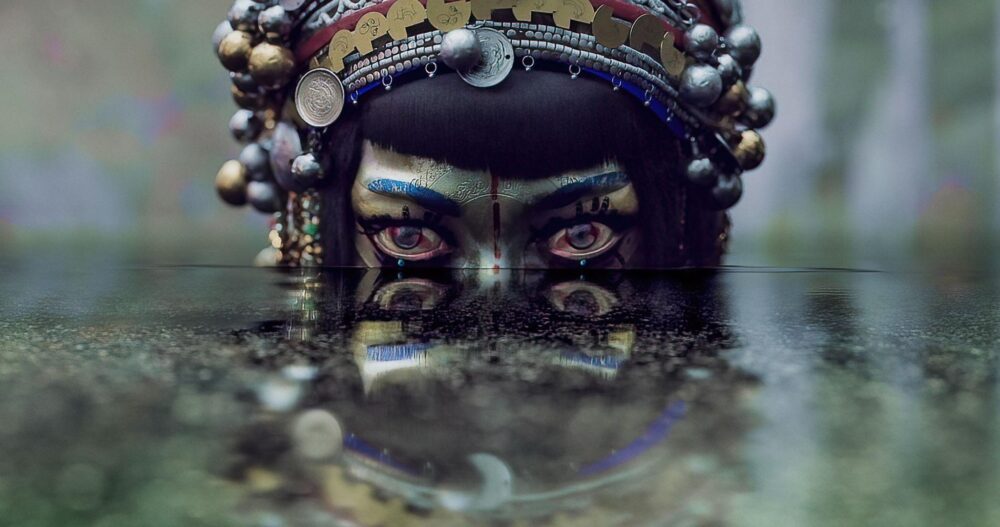 Produced by Sergio Jimenez, the animation for the short was handled by Mielgo’s studio, Pinkman.tv. About 75 people in total worked on Jibaro at the Madrid studio. “We also had great feedback from the team at Blur in Los Angeles,” says the director. “They were super supportive and never gave any obnoxious notes!”

The recent Oscar winner adds, “In terms of visuals, it’s very brutal and raw. It’s also very sophisticated in terms of the CG effects and depictions of water, blood, liquids, cloth simulation, horses and tons of people killing each other on the screen! I hope audiences will love it. I was really trying to make paintings in every shot. I consider the story to be very personal, and I believe it’s my biggest achievement visually.” 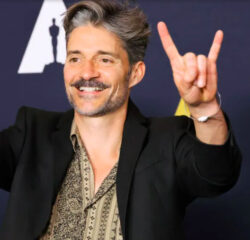 While Netflix is tight-lipped about a fourth season, Miller and Yuh Nelson admit that they have numerous ideas for stories to create in the future. “Jennifer and I look at this big deck of all the story ideas we have collected, and there are at least enough for three more seasons,” says Miller. “I have reached a point now that I get sad when I find a new story, because I think, ‘If we don’t get more seasons, I won’t get to do this one.’ I also love that Jennifer and I are just different enough that we have a nice mix of ideas, but we’re similar enough that I knew she’ll get excited about a story that I find interesting. But I just can’t say enough about the debt that we owe the original writers. Their stories have been like these diamonds scattered on the beach, just waiting for us to pick them up.”

All three seasons of Love, Death + Robots are streaming on Netflix worldwide today (Friday, May 20). 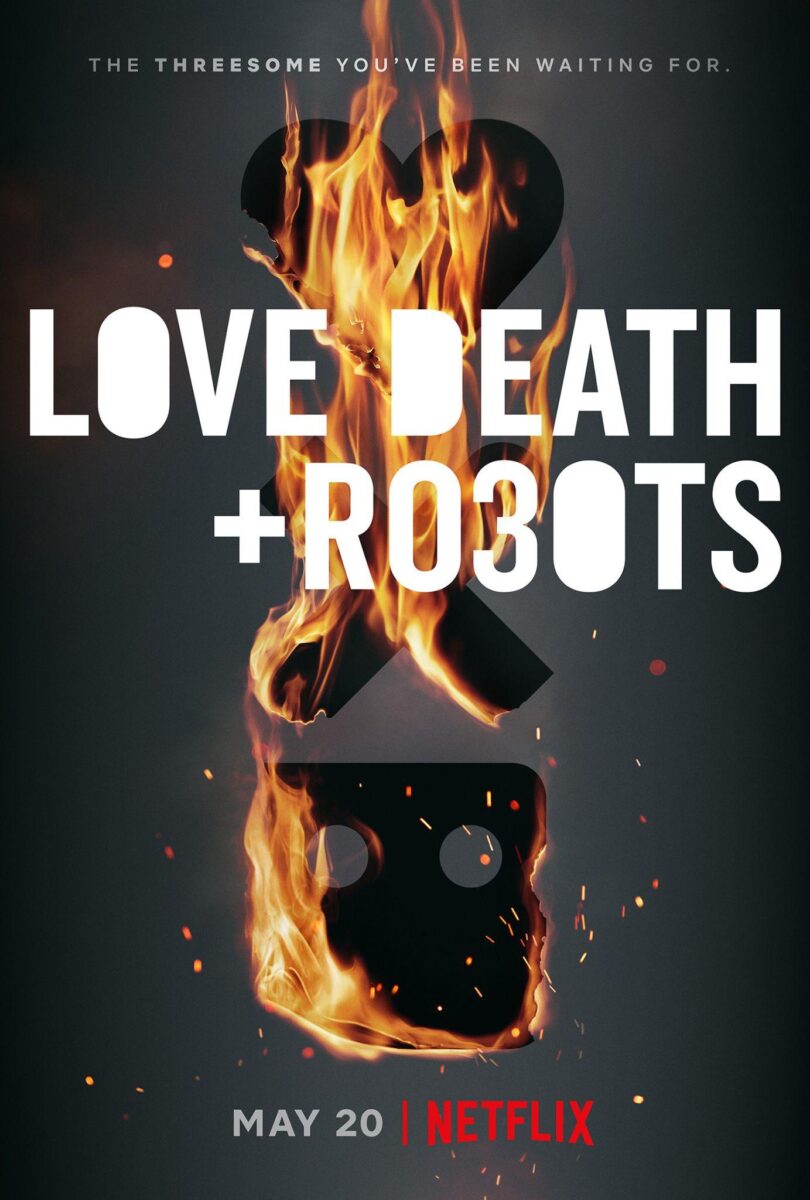