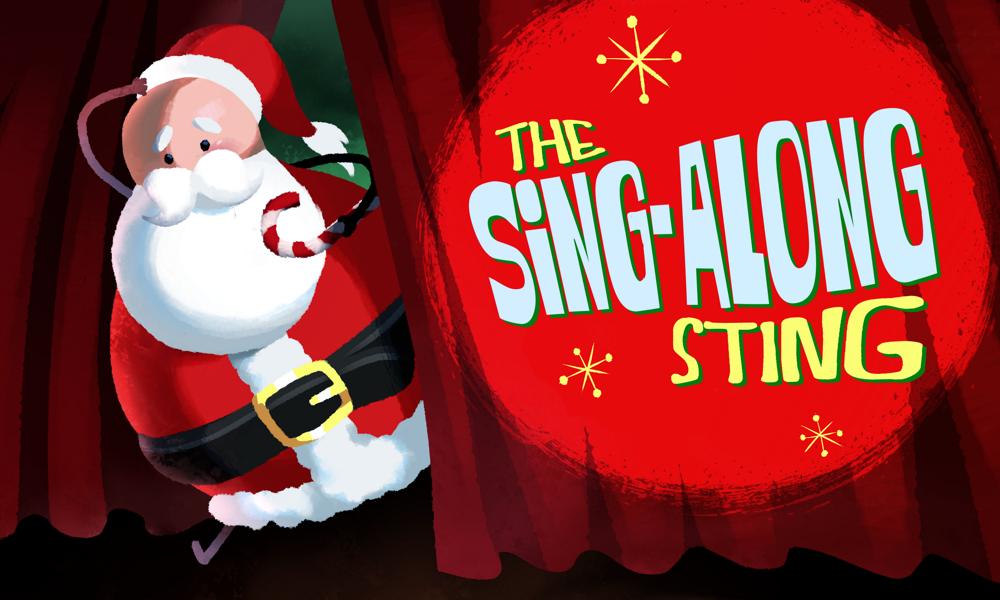 Family tension reaches an all new level in The Stockholms — a hilarious new adult animated series from Explosm (Cyanide and Happiness, Freakpocalypse) and animation studio Octopie (Paranormal Action Squad, Netflix’s upcoming Magic: The Gathering). The 2D toon is a sitcom sendup which follows a goofball bank robber who has spent months in a bank with his loving “family” of hostages, all thanks to a pushover negotiator. The Stockholms is rolling out now, exclusively on the Octopie YouTube channel.

In addition to sharing an exclusive clip from an upcoming musical episode, “The Sing-A-Long Sting”, series creator Mike Salcedo (writer/director, The Cyanide & Happiness Show, Cyanide and Happiness Shorts) and Explosm co-founder Rob DenBleyker granted us a few moments to discuss their wild — and weirdly relatable — new show. Read on below the clip!

Animag: How did you come up with the story concept for The Stockholms?

Mike Salcedo: It originally started as a gag for my webcomic, Bigfoot Justice. The original idea was a Saturday Night Live-style show, where every cast member was held at gunpoint, forced to read off of cue cards, and the audience was held at gunpoint and forced to laugh. After that, I just became interested in what would happen if a hostage situation just never escalated or deescalated, but just went on forever. What would the absolute best-case scenario look like (minus a clean getaway)? Most of my webcomic gags are weird “what-if” scenarios or premises, and this idea was all premise without a “4th panel punchline,” so I held onto it until we needed a pitch for an original show.

How long has the series been in development/production?

Mike: The deal with Octopie was finalized in October 2019, pre-production began in January 2020, and the final episode wrapped in June 2020, so it’s been a nine-month sprint to put this thing together, which is fitting because it feels like the whole team’s baby.

Mike: The animation is produced here at Explosm, specifically by Bill Jones and Matt Thurman, our Animation Director and Supervising Animator, respectively. Our entire team is about 30 people, but the team dedicated to Stockholms full-time was around 10. We used Adobe Animate for animatics, backgrounds and character designs, and used Toon Boom Harmony for animation. Editing was done in Adobe Premiere. Our producer, Adam Nusrallah, used Smartsheets to track the entire process.

When did you start working with Explosm?

Rob DenBleyker: I started the company with some friends over a decade ago. We realized Cyanide & Happiness was turning from a hobby into something a lot bigger, so we started figuring out how to scale up and do animation more regularly. Our Kickstarter in 2013 enabled us to start doing weekly YouTube animation, and since then we’ve been very fortunate to be able to do all kinds of side projects, The Stockholms being the latest.

Mike: In 2013, I was studying animation at University of Texas at Dallas and was looking for a summer library job on their career website. I was perplexed to see a Cyanide & Happiness job posting among a bunch of ordinary campus jobs. One of the creators and the business manager had both gone to UTD, so they made a job posting there. “Funny 2D flash animation” was exactly my skill set at the time, so I applied to be an animatic artist that day.

On the day of the interview, they showed me an in-progress animatic from Season 1 of The Cyanide & Happiness Show, and I pitched a visual gag for it. In the moment I thought I’d overstepped my bounds and blown it, but they’ve since told me that was a deciding factor in hiring me!

What are the differences between making a serialized cartoon as opposed to the Cyanide & Happiness shorts?

Mike: It’s been a new challenge to figure out who all these characters are, since we’re spending so much more time with them than we do with shorts characters, who usually exist in service of a one-off gag. On the other hand, a huge benefit to the serialized approach is that we can sort of “double-jump” off of the groundwork set in previous episodes. We’re allowed to take small character moments, and let them “snowball” into arcs over the course of 10 episodes. Because of this, I think the episodes feel bigger and better as they progress. It’s a luxury that we don’t always have with shorts, where we have to start from scratch every week.

How has it been partnering with Octopie?

Mike: Octopie has been incredibly supportive through the whole process. They come from an animation background as well, so they’re really understanding of the limitations of animation and of our pipeline. The few notes we received we either completely agreed with, or had to call “jinx” because we’d been thinking of the same changes. It was a really pleasant partnership.

Rob: We couldn’t have had a better partner on this, Octopie really gave us free reign creatively and a lot of very good feedback on stuff like character development. They brought a ton to the project while also allowing us freedom to make something true to the Cyanide & Happiness style.

Do you have a favorite character or moment in The Stockholms you can share with us?

Rob: I’ve watched the musical episode (I won’t say which episode it is) about 20 times. This is our third time doing musical numbers in a video/episode and it’s always my favorite thing. The episode right after that one is also completely insane. Those two episodes back to back might be my favorite two pieces of content we’ve ever made.

Mike: It feels like a cop-out, but honestly, every character has become my favorite as they’ve developed. For example, Ned, the negotiator, started out as my least favorite because he was only there as the foil for Jasper, the bank robber. As we fleshed Ned out, I really grew to love him. If there’s ever a Season 2 (fingers crossed!), Ned’s got an incredible character arc that I’m dying to make happen.

Non cop-out answer: I absolutely love Marley. I identify with Marley the most, and her voice is so funny to me. Her voice actor, Autumn [Netherton], gave so many hilarious deliveries and I had the hardest time deciding which to use.

Favorite moment in the series is in Ep. 2 (“The Prom Job”), when Jasper decides to do something nice for Marley by throwing her a stay-at-home prom. We show a montage of him hanging a streamer, sticking the letters “P-R” to the wall, and inflating a balloon. Then we zoom out to show that’s literally all he did. There’s one streamer, one hanging balloon, and an unfinished “PROM” sign. That gag was written by Rob DenBleyker. For me, that moment is tied with the entire musical episode, “The Sing-A-Long Sting” (Ep. 6), which I love.

Which movies or shows are your biggest inspirations?

Mike: Two of my biggest inspirations were Powerpuff Girls and Dexter’s Laboratory, which is kind of telegraphed by this show’s stylized backgrounds (masterfully crafted by our BG artist, Denise Magdale). I also loved Hey Arnold, which sometimes dealt with serious subjects without always being in-your-face funny. I’m a big fan of how they based character designs off of objects, which I integrated into this show. Jasper’s head is a rounded 50s TV screen, Charlene’s is a bowling pin, Ned is a gumdrop, and there’s a Pizza Guy who is a giant slice of pizza.

A big storytelling inspiration was this show Zombie College created by Eric Kaplan and directed by Jon Rice for Icebox.com back in 2000. It was a 12-part series with 3-5 minute episodes. Since that’s almost exactly our framework, that was my main reference for concise storytelling in this show. Even though their episodes were short, there was a strong sense of continuity between episodes, which kept me coming back for more. Plus, it was written by a Futurama and Simpsons writer, so it was hilarious.

Rob: I’m a huge fan of Rick and Morty. There’s something special about the dialogue and flow that feels organic compared to any other animation series I’ve ever seen. You can tell they have fun with it at every step in production, and that by itself is a huge inspiration for the way I try to work.

While I’m pretty content as a comedy fan, I feel like the end-goal is to catch up with Japan and let “adult animation” breach all genres. That, and I want to see more theatrical releases! I’m still in shock that we got to see an R-rated Sausage Party actually come to theaters.

Now that The Stockholms is ready to debut, what do you hope viewers get from the experience?

Mike: I want viewers to laugh, but more than anything, I hope they’ll connect with and become invested in the characters. There’s a lot of heart in this show, which is scarier to put out there than a failed joke for me. I feel like when you love a character, they don’t have to make you laugh all the time. You just want to check in and see what they’re up to, and where their story is taking them. We actually had some folks on the crew tear up during an episode, which I never considered was an option.

Rob: The Stockholms is really fun, but also extremely dumb and silly. I hope what people get out of it is enough laughter to boost their dopamine levels and temporarily forget this hellworld of 2020.

Speaking of… How have you been keeping (mostly) sane during the COVID-19 shutdowns?

Mike: Primarily, I’ve been distracting myself from being stuck at home by creating a show about people stuck at home. Other than that, I’ve been going on long walks every morning, which really helps break up the day, and puts me in a better place mentally. The Explosm crew also streams Friday Night movies on Discord, which we used to do in the physical office. We have themed months like “Jackie Chanuary” and “Ape-ril” (only movies with apes in them … in April). I spend so much time voice-chatting these days, I feel like I’m running up the phone bill in 8th grade again.

What’s the best advice you have for aspiring web animation creators?

Mike: Just start making stuff and don’t be precious with all your ideas! Just pick your dumbest ideas and crank them out, so you can improve in time to make the thing you care about. There’s that great Chuck Jones quote, “Every artist has thousands of bad drawings in them, and the only way to get rid of them is to draw them out.”

Rob: Start simple and don’t overwhelm yourself! It’s easier than ever to find an audience, but animation is tough to learn. Take your time and make things in your comfort zone. Take in feedback online, but don’t let negative feedback scare you away. Everyone starts knowing nothing, and that’s part of the fun.

‘Ride Your Wave’: Exclusive Clip and Q&A with Producer Eunyoung Choi
MIPCOM/MIP Jr. Trim Down to 3-Days with No Exhibition; Majors Bow Out