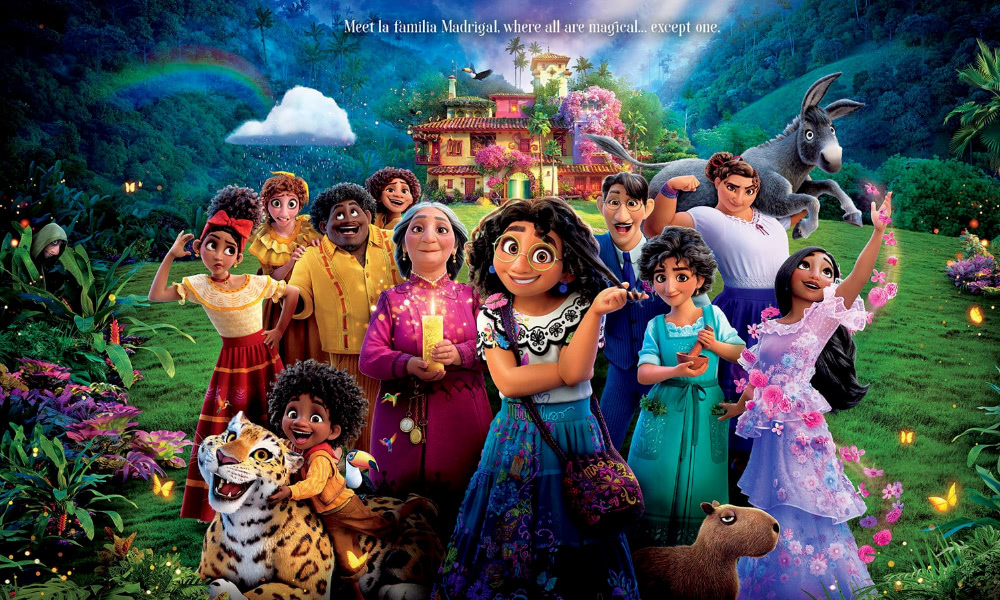 Disney+ kicks off holiday festivities this Friday, December 24, when Walt Disney Animation Studios’ Encanto  launches on the streamer. In a new featurette, Lin-Manuel Miranda — who wrote eight original songs for the film — teams up with the voice of Mirabel, Stephanie Beatriz, to share insights about several of the film’s songs, including “Dos Oruguitas” — a Critics’ Choice Awards nominee for best original song.

Miranda, who visited Colombia with directors Jared Bush and Byron Howard in 2018, infused the songs with the rhythms, instrumentation and varied styles of the South American country’s music. “Encanto takes place in rural Colombia,” said Miranda, “and the music that comes out of Colombia is so beautiful.”

In the film, Mirabel often reveals her internal struggles and revelations through song. “There’s something that clicks inside her where she realizes the wheels are in motion for her to chase down her destiny,” said Beatriz. “I like these heroine songs so much. We go on this major journey with the character and suddenly we know her better from the inside.”

The season will also see the new animated prehistoric romp The Ice Age Adventures of Buck Wild, coming to Disney+ on January 28, continuing the hilarious escapades of the sub-zero heroes from the wildly successful global franchise.

Eager for a little independence, the thrill-seeking possum brothers Crash and Eddie set out to find a place of their own, but quickly find themselves trapped beneath the ice in a massive cave inhabited by dinosaurs. They are rescued by the one-eyed, adventure-loving weasel Buck Wild, and together, with the help of some new friends, embark on a mission to save the Lost World from dinosaur domination.

Star Wars fans can also keep up with the ongoing escapades of their favorite Mandalorian in new episodes of The Book of Boba Fett each week. Library titles arriving on Disney+ in January include Miraculous: Tales of Ladybug & Cat Noir (S4, 7 episodes, Jan. 5).

Young Hulu viewers can catch the complete sixth season of Madagascar: A Little Wild on January 13. Alex, Marty, Melman and Gloria step out of the comfort of home to find adventure in exotic places, like the wilds of New Jersey! They’ll meet up with old friends, including Bartholomew the Bat and Lala the now-grown Frog. And they’ll make new friends, like a mysterious salsa-dancing parrot who Gloria is determined to help, an adorable but uncontrollable puppy who steals Marty’s heart, and a clever deaf girl whose conversation with Dave sends the gang on a city-wide adventure. And they’ll finally spend a day with the notorious Bill the Flamingo, who says he wants to be a friend, but may just turn out to be Alex’s worst enemy!

Across Disney Branded Television, January will offer up new adventures with favorite characters for the tykes, including Spider-Man, the Avengers, Bingo & Rolly.

Friday, Jan. 7
Spidey and His Amazing Friends “Spin Rushes In/Bridge Bandit” (9:00-9:30 a.m. EST on Disney Channel/12:30-1:00 p.m. EST on Disney Junior) – When Doc Ock steals the arachno-sting power, Team Spidey must work to get it back before it puts the town to sleep.

– Green Goblin and Rhino take over a bridge and threaten to destroy it.

– When Darius’ Aunt and Uncle Day gift accidentally gets sent out with the mail, the pugs lead Buster and Leo on a mission to bring it back.

– After Darius joins a little league team, Buster enlists the help of Bingo and Rolly to find him the perfect baseball glove.

– Spidey and Ghosty juggle the responsibility of taking care of a cute puppy while also trying to stop Rhino’s rampage at the mall.

– When Keia accidentally rips her precious Bunny Monkey, the pets work together to put the toy back together.