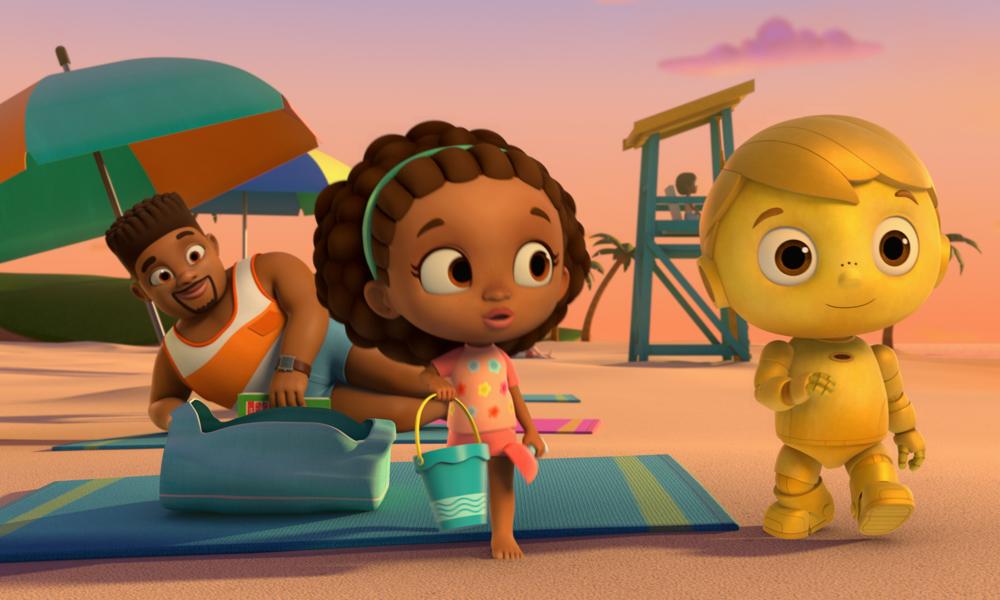 Since its launch in late 2019, Apple TV+ has quickly become a great spot to find excellent animated fare aiming at family audiences and fans of top-notch animation. After delivering the acclaimed animated special Here We Are: Notes for Living on Planet Earth and the charming musical comedy Central Park earlier this year, it is continuing to raise the bar with two new offerings: Doug Unplugs, which premieres this Friday, November 13, and Stillwater, which will premiere in December. We caught up with three members of the creative team behind the new show, just in time for its debut.

Yaccarino tells us that the origins of Doug Unplugs go back to the days his own children were making their way to elementary school. “I noticed that they were using online resources more and more, so I started thinking about the sheer wealth of information they had at their fingertips, which was amazing, but what about the other ways we discover and learn about the world?” he asks. Then, about 10 years ago, Yaccarino decided to hang his ideas on a character. “I have an affection for robots, so I tried that. I then decided that a book would be the best initial medium to explore the subject and after about a year, I came up with the concept for Doug Unplugged, which was published a few years after I initially came up with the basic idea.”

Soon after, Yaccarino was approached by DreamWorks Animation Chief Creative Officer Peter Gal, who was interested in developing a show about kids and technology. “Once the brilliantly talented Jim Nolan and Aliki Theofilopoulos were brought on to further develop the idea, things clicked,” says the creator. “The project really kicked into high gear as we met with potential broadcast and streaming partners. Once we formed a partnership with Apple TV+, we went into production.” 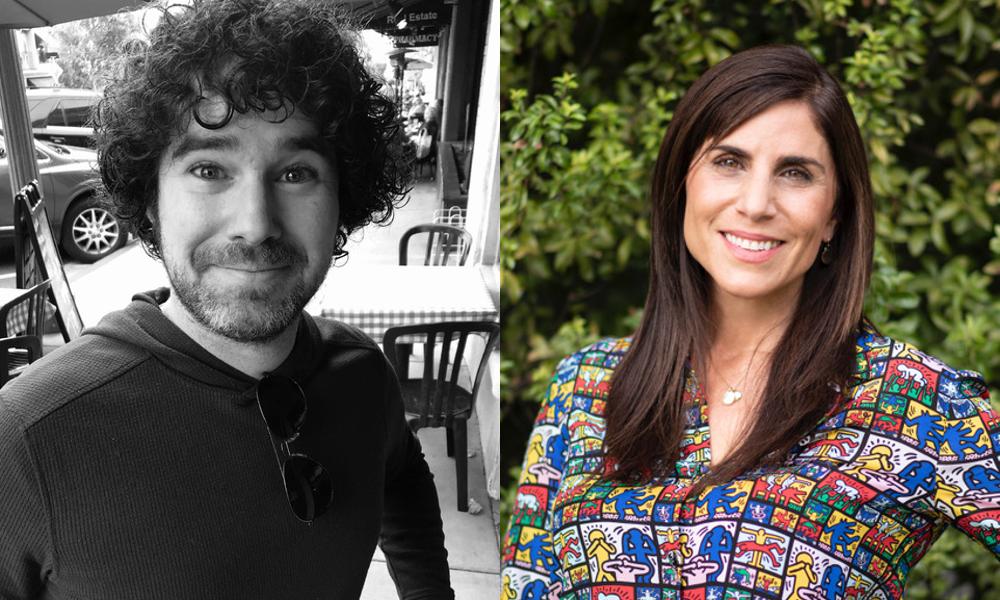 All the Right People

Both Nolan and Theofilopoulos instantly connected with the show’s message and characters. “We pitched it to Apple who, to their infinite credit, didn’t flee the room as Dan and I literally acted out sections of our pilot script,” recalls Nolan. “Once we officially partnered with them we worked together to continue to develop and fine tune the series. And, of course, Aliki jumped in around then with her boatload of talent and leadership skills in tow.”

Theofilopoulous adds, “By the time I came onto the project, Jim had developed a wonderful take on Dan’s awesome book series building out the world with a slew of fun robots, creating the concept of ‘Rebots,’ and of course adding a best friend for Doug, a spirited human named Emma. I fell in love with the concept and jumped at the opportunity to help develop the project further in partnership with Jim and Dan, also bringing on a great art director, Matt Doering, whom I had worked with on a previous DreamWorks series, Harvey Girls Forever. Matt was instrumental in the creation of the design theory of the robot vs. human world. With this team in place, the Doug Unplugs universe expanded to where it is now!” 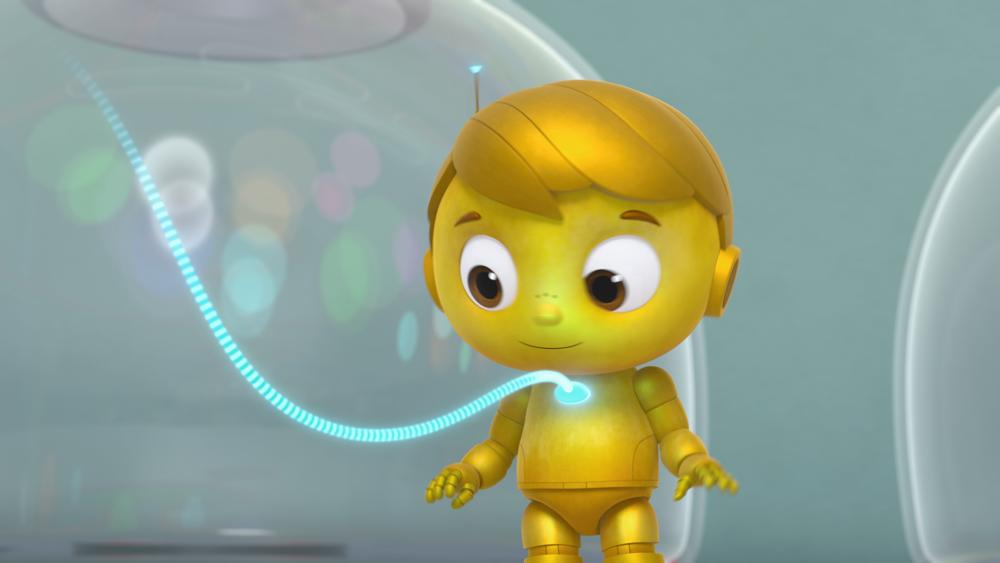 The three creatives are quite pleased with the final results of their labor. Theofilopoulos explains, “I absolutely love this idea that we have a show that says, ‘Technology is great, we embrace and love technology. But then, there comes a time where we need to unplug and have an actual experience. Technology can help inform that experience, but it is by actually doing where one really gets to have a personal take away from any given situation.’ This messaging is so appropriate and much needed not only for children, but for us adults, too!”

Nolan adds, “I love that we emphasize balancing technology and experience, that both play an important role and that you need each to get the full picture of a topic. Given my two-year-old son knows how to find videos of himself on my phone, I can’t imagine a more timely takeaway! But more than that, I love our characters; our robots and our humans. I like their big personalities and that, even for a young show, they have foibles and make mistakes, they’re not perfect, they learn. I love their voices, the different ways they move and how they’re designed. 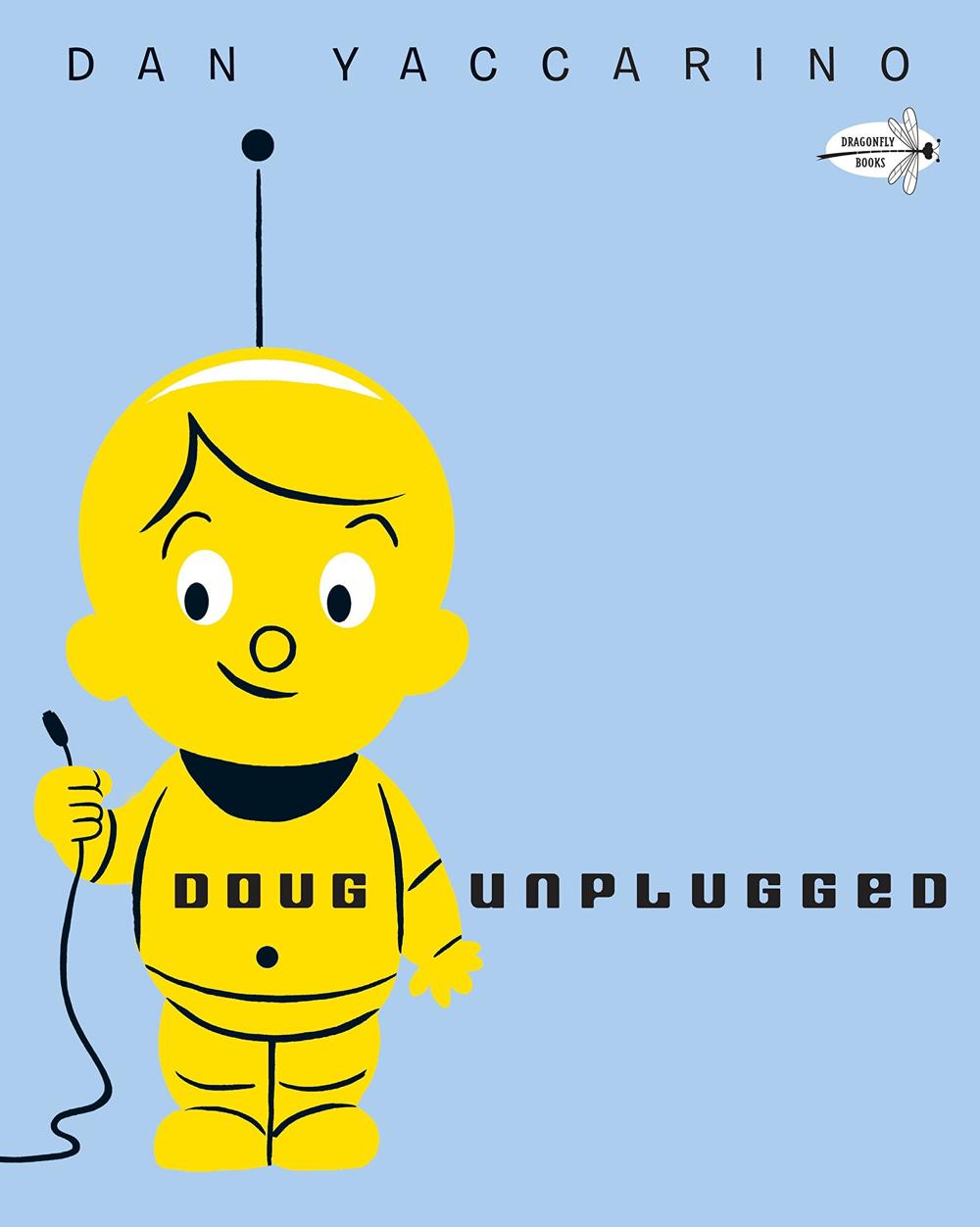 Doug Unplugged, the book which inspired the show.

Yaccarino admits that he started to tear up the first time he watched the show’s trailer. “It was so beautiful,” he says. “I suddenly realized it took 10 years to get Doug to the screen! It truly captured the spirit of this innocent robot discovering the human world for the first time. It really touched my heart. The other thing I love about the show is all the talented people who worked together to bring it to life. There are so many wonderfully dedicated people who shared their gifts and passion to realize the characters and their unique world.”

Theofilopoulos mentions that it was very important for her to make sure the show upheld 2D animation principles although it was CG-animated. “I didn’t want every character’s animation to feel the same,” she explains. “I wanted Emma to move like Emma, and for Doug to move like Doug. Emma has a more animated personality, so I wanted to see her animation to be really snappy. Doug is a robot, and has a more subdued personality, so I wanted him to feel like a robot as far as weight and such, but to also feel alive like a real boy! I have to say I’m so happy with how the animation turned out! A big thanks to our animation supervisor on the show, James Parris, and to our animation team at CGCG.” 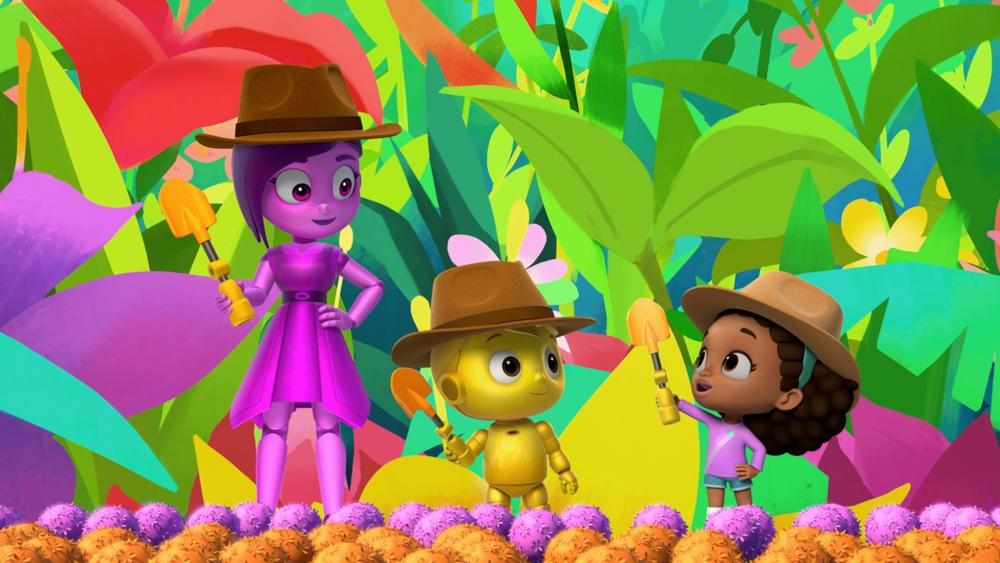 She says one of the most valuable lessons she has learned throughout her career is something that Phineas and Ferb creator Dan Povenmire taught her. “Dan told me ‘Let your crew surprise you…Sometimes you might have something in your head and think it should be done one way, but give your crew the space to try something their way. Before reacting with ‘Well I wouldn’t have done it that way’ ask yourself ‘well, can it be this way too??'”

“I have found this advice not only allows the team to feel a sense of ownership of their work, but I get to be surprised by the fun stuff they come up with!” notes Theofilopoulos. “Another valuable lesson came from my mentor at Disney Features, John Ripa who told me on my last day working with him. ‘Always remain teachable, no matter what you do or where you are in your career.” I’ve tried to do just that. Lastly, if you have aspirations of becoming a leader in this field, do the work, but also let people know of your aspirations. People in this field really want to help guide those that are passionate about learning and growing. We were all there at one point!”

Nolan chimes in, “And don’t forget to have fun! Even when it’s tough and deadlines are looming, I think what we get to do for a living is pretty special, and sometimes we need to remind ourselves to enjoy it. I couldn’t have worked with a cheerier or funnier bunch and I like to hope that the fun we had making the show is reflected in the final product.”

“Since this was my first time in a role like this, the challenge has been learning how to communicate a vision for the series to the team, get everyone kind of pulling in the same direction while still making sure there’s plenty of room for everyone to bring their own creativity and ideas too,” Nolan points out. “Our team was loaded with talent – so sometimes I found it was just best to get out of the way! I’m especially appreciative of our story editor, Noelle Wright, who really drove the writing side of the show and couldn’t have been a better partner, sounding board and leader to our amazing writing team.”

Yaccarino says his intention for the animated series, as well as the books, is that there’s more to learning than just the cold hard facts. “There is also the ineffable joy of experience, something that can’t be expressed in numbers or words,” he notes. “It’s the experience of being a human being. It’s experiencing life itself and it should be celebrated.” 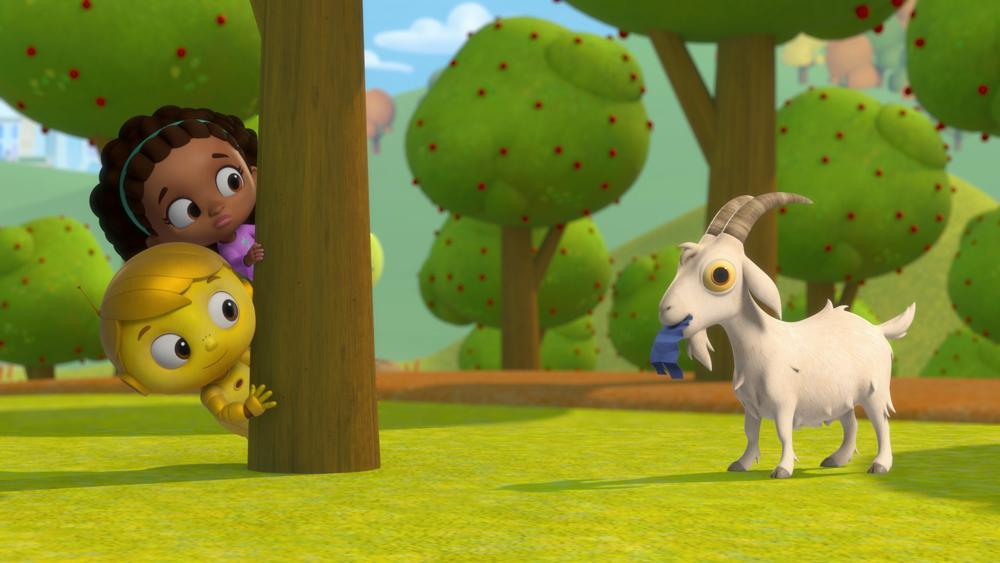 Nolan says he just wants everyone to have fun watching the series. “Hopefully if they do, kids will be inspired by Doug and Emma’s curiosity and the way it sort of leads them into their adventures, encouraged to ‘unplug’ and explore the world around them, too.”

“I hope that they will love getting to know Doug and Emma and how wonderful their friendship is,” says Theofilopoulos. “That they will find delight in silly robots, big and small adventures, great music and, of course, the benefit of plugging in to learn information and stay connected with those we care about, but also, unplugging and having great experiences with friends and family!” 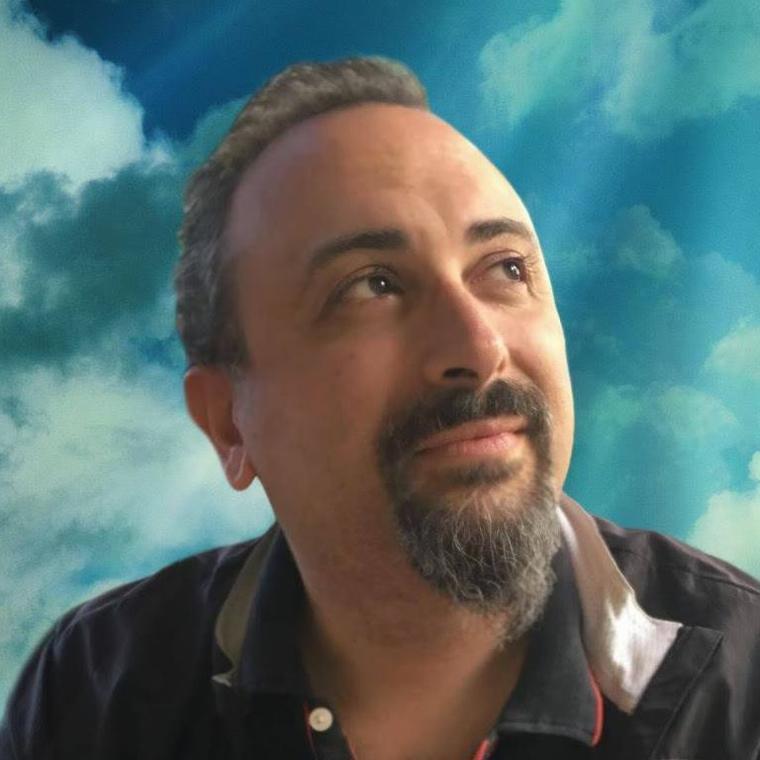 “Bring the best people available into the project and allow them to do their best work. On my series Oswald and Willa’s Wild Life, I made sure the absolute best people I could find were working on it and I trusted them. I’m not a micro-manager, but if I find myself giving a lot of direction or constantly revising someone’s work, then I didn’t do my number one job, which was to bring the best people in. I wanted everyone who worked on the series to put their own fingerprints on them in order to have ownership. Because of this, everyone involved felt a part of it and worked harder and took more pride in what they did.

“The same is true for Doug Unplugs. Everyone involved gave their best and it really shows on screen. I’m so proud and happy to be a part of it. Although I’ve been creating and producing animated series for 20 years, there’s always so much more to learn. There’s always something new to discover, so many talented people to work with and so much joy to be experienced. I am grateful to be able to do what I do.

“In addition to producing and writing and illustrating books, I travel quite a bit visiting schools to talk about what I do, but of course, all of my visits were cancelled, so in addition to giving virtual presentations, I decided to take the time to develop some book ideas I’d been meaning to get to that could potentially be source material for animated series and features. Part of my being is somewhat hermit-like – I might have been a monk in a past life, living in a monastery, spending my life creating an illuminated manuscript – so I was fine with spending time alone for days at a time, working into the wee hours, talking to myself, occasionally seeing my son and daughter, but also practicing TM and doing some yoga. I’ve also rediscovered my love of cooking – which is dangerous because, being Italian, I not only love to cook, but love to eat.”